Home on the Lake

A years-long search ends in a comfortable, contemporary, and efficient lakeside home

The focal point of the exterior is the covered entry, where the building’s two volumes and three roofs converge. 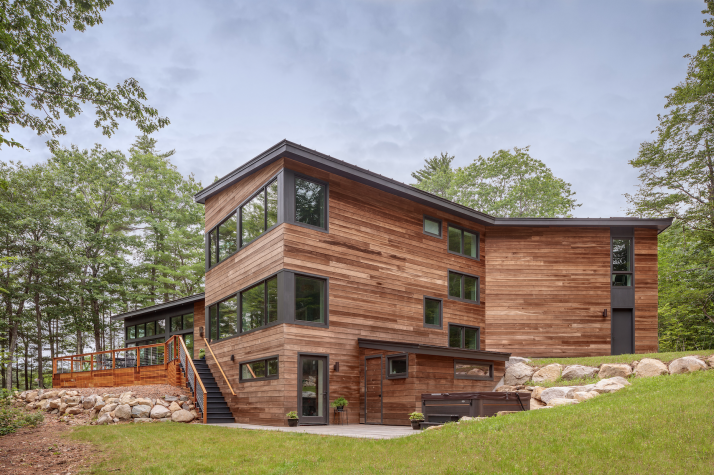 The small shed-roofed structure at the back of the home is a sauna, designed in collaboration with the Finnish American homeowner; the patio includes radiant heat to keep it free from snow 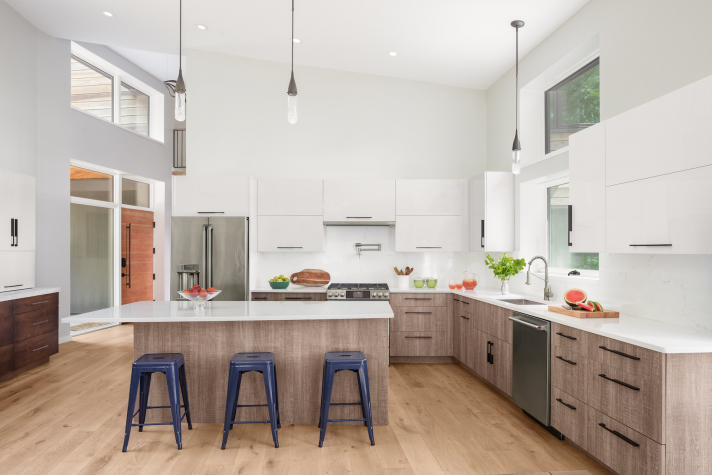 A trapezoidal island smooths the transition between the kitchen’s angled back wall and the dining area, while providing generous space for sitting and serving. 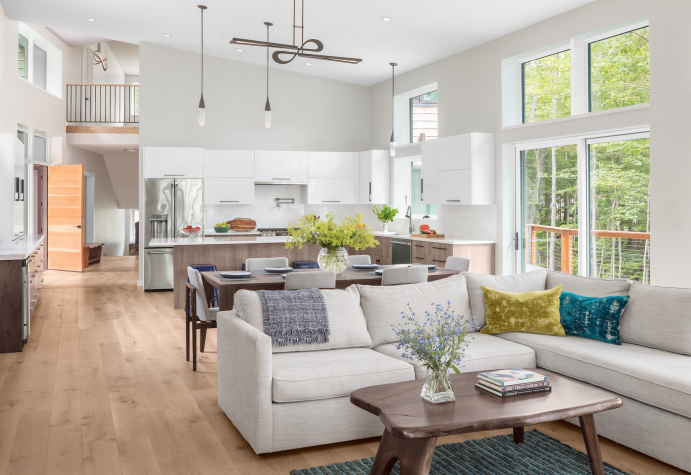 The dramatic pendant lights in the entry and great room, from Hubbardton Forge, are matched by the second floor balusters, which are vertical in order to discourage climbing by grandchildren. 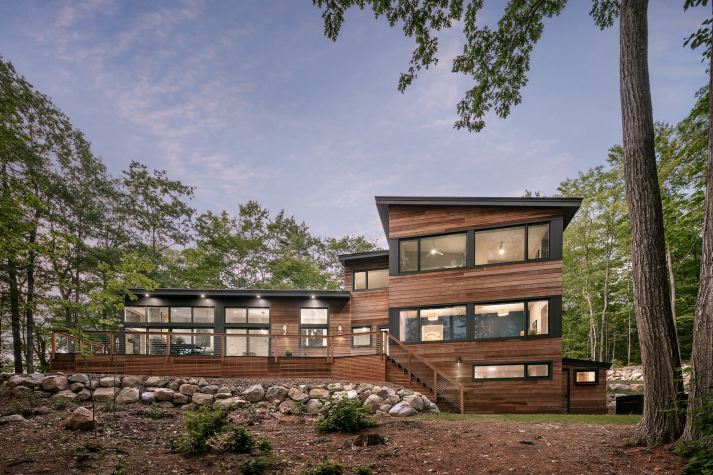 In order to accommodate aging in place while providing space for guests, Harry Hepburn of Briburn placed the kitchen and living/dining room in a single-story volume. The owners’ suite, laundry room, and mudroom are on the first floor of the multistory volume, with guest bedrooms above. 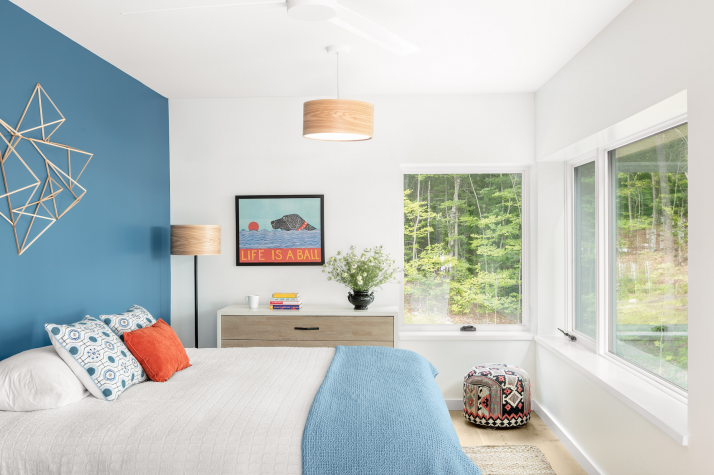 The owners’ bedroom nods to the heritage of one of the homeowners, with a blue that evokes the Finnish flag and Scandinavian-style wooden lampshades purchased from Etsy; even though it is on the first floor, the homeowners say their bedroom feels like a treehouse, from which they can watch the moon crossing the lake

For many years, a couple lived in some of the most beautiful places on Maine’s southern coast, with easy access to sandy beaches and rocky shores. But they noticed that they kept driving inland, to the waters of the Sebago region. “I always wanted to be on the lake, for swimming,” says the wife. She started looking for a summer home or camp where they could take breaks from her work as an English teacher and her husband’s job as a physician. “I looked for ten years,” she says. “The woman who was my realtor is now my very good friend, after we spent all that time together.” By the time they had found and acquired the ideal property— a wooded peninsula on Crescent Lake in Raymond—their situation had changed. “We were transitioning from being parents of kids to parents of adults with families of their own. We wanted a place where everybody could come and be together—but not so much house we couldn’t handle it.” Rather than a summerhouse, they began to imagine a home they could retire to in comfort and ease.

After a decade of looking for the right place, they took their time figuring out how to use it. They put out a dock for their canoe first, later added a tent platform and firepit, and then spent two years getting to know the land, thinking about its possibilities and their priorities. Finally, they hired Harry Hepburn of Briburn to design an easy-tomaintain, energy-efficient, and accessible home that would let in water views at every turn. “It’s a modern lake house influenced by Scandinavian design, with simple forms, clean materials and minimal finishes, open space for living, and an uncluttered aesthetic and feel. It’s not a huge house, but it has a lot within it. It accomplishes a lot,” says Hepburn.

After spending so much time on the site, the family knew which views they wanted to see from indoors. From the kitchen sink you look south over the lake; the sun sets behind the fireplace in the great room; the moon travels across the owners’ bedroom. Hepburn considered the site carefully. “There are two things we look at: how the sun moves as it rises and falls, and the way you live in a home,” he says. “As the sun passes over the rooms, they will get lighting all through the day.” The home had to be set at least 100 feet from the curving shoreline, so if it were to accomplish this and also be close to the water, no simple shape would work. Hepburn’s solution was two intersecting volumes: a tall single story to the west that holds the kitchen and great room, and two stories of bedrooms on the east, where they get sunrise light. “When you look at it from overhead, it bends to open up views to the site, create interesting vistas, and bring in natural daylighting. It’s a unique plan configuration,” says Hepburn.

The angles and bends of the home created some interior design challenges, however, especially in the kitchen. The back wall that holds the stove and refrigerator is angled away from the dining and living areas, which occupy a dramatic open space that gives a panoramic view of the lake. In order to transition between the two areas, the quartz-topped kitchen island became a trapezoid. There were other design considerations as well. “The last time we did a kitchen design, we didn’t have grandkids,” says the wife. They now have four, the eldest eight and the youngest a newborn, so they chose materials for counters and cupboards that would be easy to wipe down. Still, they couldn’t anticipate everything. “They love climbing on these drawer pulls,” she sighs.

In order to accommodate aging in place, the owners’ suite forms the first floor of the two-story volume of the home, along with a mudroom, laundry, and half bath. The entry is between the two volumes. “The double-high space at the entry gives an opportunity to create connectivity between the second floor and first floor,” says Hepburn. “There’s a really interesting thing that happens at the entry where you get a glimpse into the great room, a glimpse into the second floor, but you don’t see the water right away. There’s an element of surprise as you get deeper into the house. When you’re redirected to the great room, immediately it opens up.” A slate-floored mudroom with built-in storage and seating is to the left of the entry, leaving the doorway clear of clutter (helped by baskets for boots, just inside the door). The first floor was designed to accommodate wheelchair use, should it be needed, with flat thresholds, wide passages through all the rooms, and grab bars in the owners’ bathroom.

For now, however, the owners make use of the whole house. Upstairs are two guest rooms, one facing east and one west, as well as the husband’s office. A large space above the garage originally intended for storage has become the grandchildren’s playroom, complete with a chalk wall and basketball hoop; it’s sleepover ready with daybeds and a pullout couch. The intrigu – ing shape of the playroom is a result of the home’s unique construction. “The roof forms create the distinguishing break between a more traditional home and a really contemporary home,” says Hepburn. “As you walk around the house the roofs kind of move, and they bend; we looked at the roofs as folding planes. We folded the roof down at the garage to break down the scale of the house, and also draw your attention to the entry at the center of the house. The playroom has a split in the middle, supported by a large steel beam, that isn’t a traditional gable, and it creates a really interesting space.” For visiting family, this means lots of nooks for fort building, reading, and snuggling.

Sustainability was a priority for the homeowners, who wanted a small energy footprint as well as a home that would be easy to maintain, inside and out. “There’s plenty of stuff I can do outside, but nothing I have to do outside,” says the husband, who has installed a substantial garden near the sauna he designed himself. The home is sided in Cambia, a thermally modified wood product that is rot resistant, and trimmed with a product made by Boral from fly ash, a byproduct of coal-burning power plants that resists rot and termites. Furthermore, “We don’t do anything without a rainscreen these days,” says Hepburn; leaving an air gap behind the siding helps it dry out and increases its longevity. Double-stud wall construction, triple-glazed windows and doors, and strict attention to the envelope keep the home comfortable year-round while conserving energy. “We tell the builders, ‘Think of it like a boat; if there’s a hole, you’ll sink and we’ll die.’ We go through and make sure they’ve done a really good job at sealing the house up,” says Hepburn. (A blower-door test showed that the builders, Hughes Construction Company, had in fact made the home shipshape, at just below 1.0 ACH50.)

After a decade of imagining, years of planning, and many months of building, the couple is finally settled into their home (“It’s 99 percent finished,” they note). Their son hopes to be married on the property next spring, and their daughter’s family are regular houseguests. At the end of the long road of design and building, the wife says, they have found their home: “This house has been just a dream. Just a wonderful place to live and congregate. We’re so happy here.” 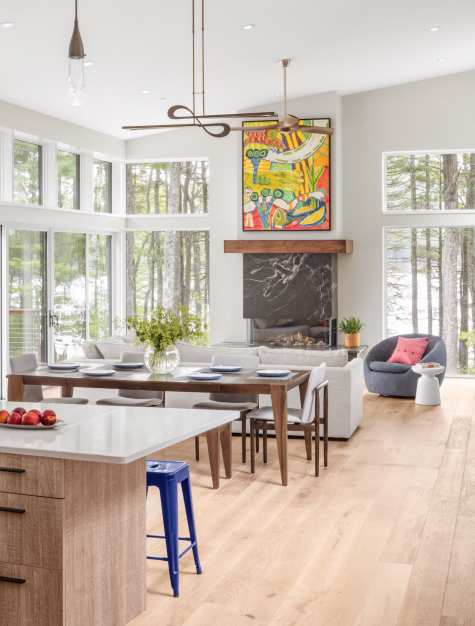 The western end of the great room is anchored by a modern granite fireplace, with a wooden mantel that recalls more traditional forms; the bright painting above it is by Maine artist Carol Bass, a former neighbor of the owners. 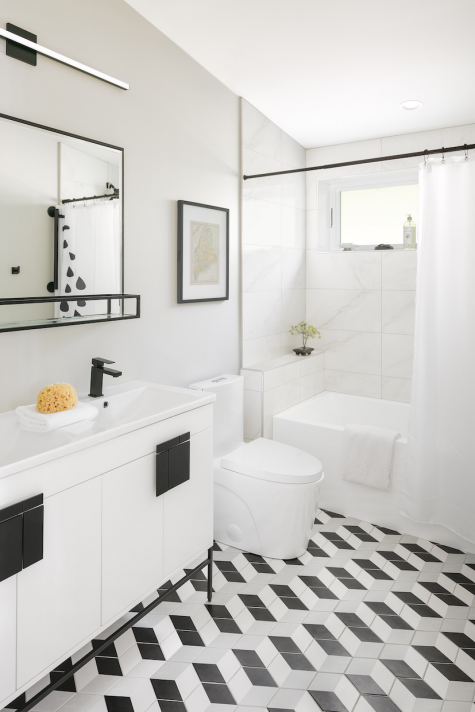 A clean white, black, and gray palette in the bathroom (opposite) creates a sense of calm, while modern geometric shapes bring energy to the design. 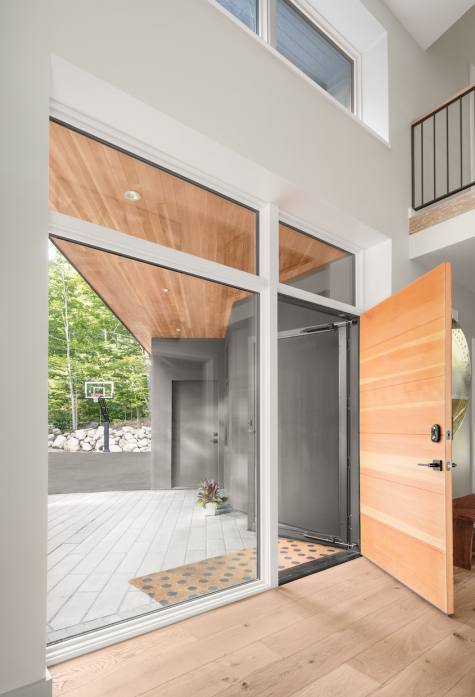 The covered entry leads into the center of the home, between the bedrooms on the left and the kitchen, living, and dining spaces to the right