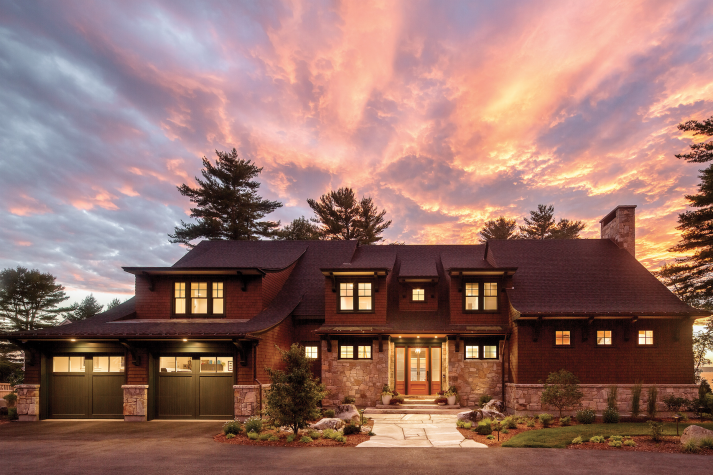 Graceline Architecture of Chicago gave a curved roofline to this unique Sebago Lake house so that it would “dance” with the mountains of nearby New Hampshire. Built by R. P. M orrison Builders, the family home also strongly features the influence of Morrison Design House. 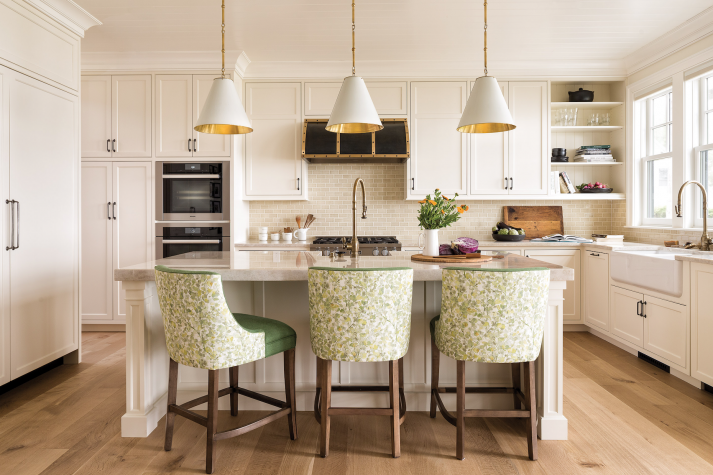 The kitchen is the work of Jenny Morrison, owner of Morrison Design House, who wanted tobalance “modern elements and more traditional looks,” she explains. “We picked out bright finishes to juxtapose with the formality of the shapes.” 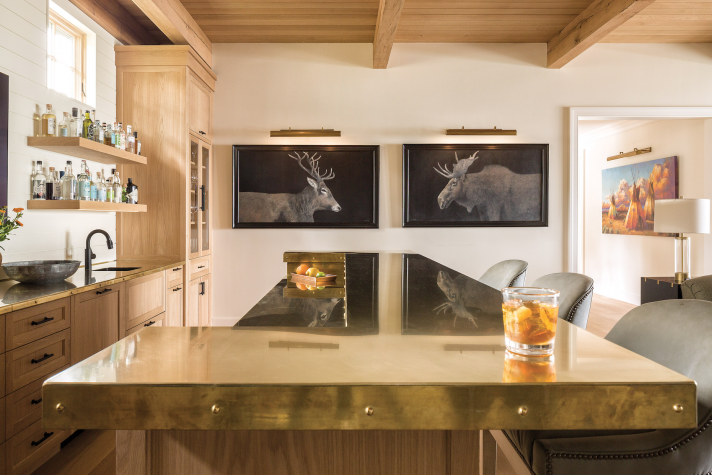 The homeowners wanted a big bar in the main living space. They like to entertain often, and wanted to make sure they could welcome a crowd. The copper top matches the other copper flashings and fixings that can be found throughout the house. 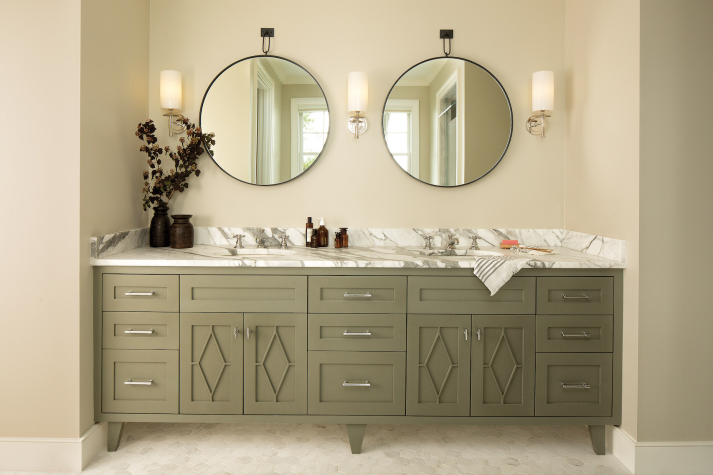 Jenny designed the millwork for the owners’ suite bathroom: “This is where I got to be a bit more experimental,” she says. “The bathroom really reflects me as a designer.” Countertops came from Midcoast Marble and Granite. 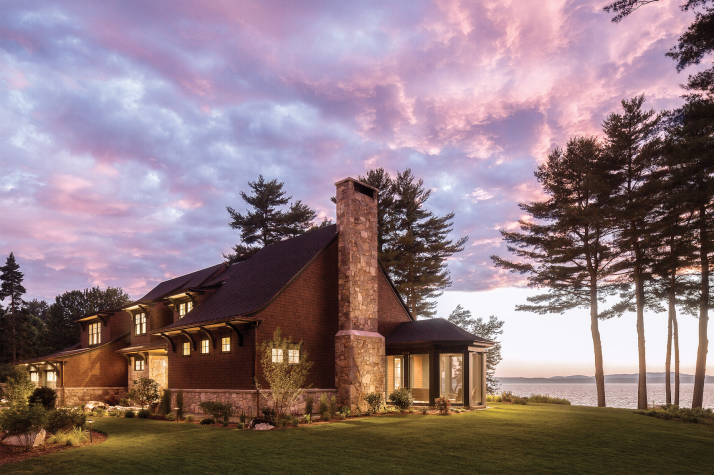 “Frank Lloyd Wright once said that a good project starts with a good client,” says Klepitsch. “This was the case with this client. It was a success because it was a great team.” 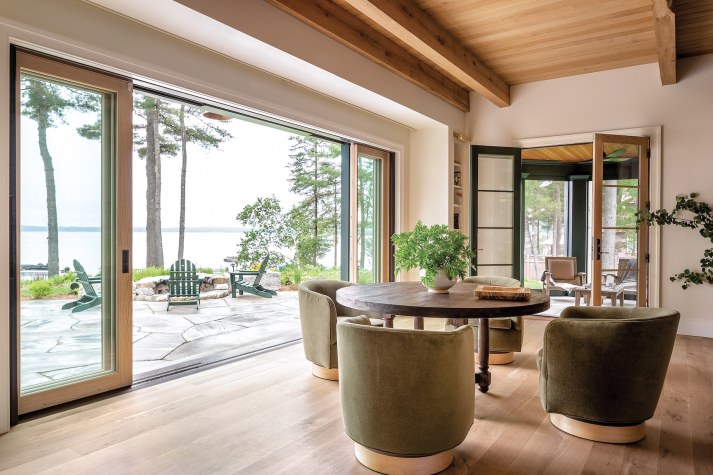 Throughout the house, they tried to pull the outside in as much as possible. Josh and Jenny selected this massive lift-and-glide glass door, which opens out onto the natural stone patio, constructed by Mike Corsie of Terrapin Landscapes. 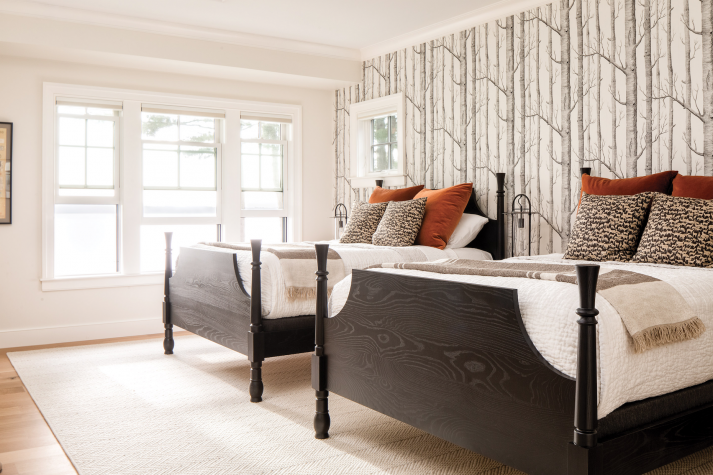 The Pattons wanted a color palette influenced by the history of Maine, one that would speak to the traditional designs of New England, hence the earthy tones found throughout the home.

There’s a part of Maine, the part where I live, where it’s not Katahdin that is king. No, down here in the Sebago region, Mount Washington looms large. The New Hampshire peak that towers over 6,000 feet above sea level looms on the horizon, blue and stately, distant and domineering. It’s no wonder that artists have been entranced by its form, but it’s not every day that you see a house designed with the mountain in mind.

Yet that’s what Frank Klepitsch wanted to do for his clients, Don and Mary Ellen Patton. The first time he saw the site, it was December, and there was snow in the air and on the ground. “I didn’t think my plane would land,” says the Chicago-based architect. But it did, and he drove out to the site in the dark, spending the night at a house on the neighboring plot. “When we woke up in the morning, I looked across the lake and saw Mount Washington. I saw the peaks that seemed to dance on the horizon line,” he recalls. Klepitsch turned to Don and asked, “How would you like your roofline to dance with the peaks of the mountains across the lake?” According to him, Don replied, “That would be awesome.” This was back in 2017. It wasn’t until September 2018 that they began construction on the lodge-inspired lake home. First the Pattons had to assemble a team, which included Klepitsch, of Graceline Architecture, Josh Morrison of R.P. Morrison Builders, Jenny Morrison of Morrison Design House, and Mike Corsie of Terrapin Landscapes. From the start, the roofline was a head-scratcher. “The curved roof was the first challenge we saw,” says Josh Morrison. “It was a fun learning process to get the boards to bend the long way.” The answer? Heat. “We were heating the boards until they were like play dough,” he recalls. “It had to be a certain temperature. Too hot and it would be too bendable, not hot enough and it wouldn’t be flexible.” The Goldilocks boards were worth the trouble for Josh and his clients: “It looks super cool. We get asked by builders all the time how we did it, because their clients want something like that, too.”

The roofline is the most clearly striking element of the house, but closer examination of the exterior reveals a number of other interesting details, from the stillshiny copper flashing to fanciful corbels that nestle under the 24-inch overhang. “We have owned vacation homes in Quebec and Montana,” explains Patton. “We’ve had homes in Columbus, Ohio, and Lake Bluff, Illinois. We have a pretty good idea of what works and what doesn’t. The first obstacle was getting a house we liked down to the last detail.” The home had to speak to the tradition of lake homes and lodges, to the history of the land as a logging camp, and to the wilderness of Maine. It had to marry the human and handcrafted elements of the region with the raw beauty of the land’s dark forests and speckled stones. “We were thinking about all the things that occurred around the lake over hundreds of years,” says Klepitsch. “The owners are creative, and they really challenged us to make good design decisions about the concept of the house.”

One essential—but tricky—component of this nature-gazing design is located in the long space that has been dubbed “the Lodge Room.” At one end of this space, there are two floor-to-ceiling glass doors that retract in two directions. Originally, Klepitsch suggested installing French doors, but ultimately the team decided not to impede the view and to let the “inside flow out and the outside flow in,” as Klepitsch puts it. “That ginormous door was new for us,” adds Josh. “It’s a lift-and-glide that is flush with the stonework. It all came down to executing that detail perfectly so that the weather wouldn’t come in when it wasn’t wanted.” The result of this painstaking process is a stately living area (complete with reclaimed beams on the ceilings, a moose head on the wall, and a long copper-topped bar) that connects seamlessly with the large boulders outside. “It was important to use a native stone,” says Corsie, “and that all of that stone be from one source.” Fabricated by Rockport Granite and sourced from Black Mountain here in Maine, the steps and patio are marked by a “very unique pattern and color,” says Jenny Morrison, wife of Josh Morrison and designer on the Patton project. “It’s a difficult stone to get, but it’s worth it.”

While Klepitsch and Josh were working to ensure that the Pattons and their guests could easily access the outdoors in a literal sense, Jenny was working to bring nature inside in a more metaphorical way. “I felt that the site had such specific coloring, and I wanted to bring that into the design,” she explains. When the Pattons first started the build, they had talked about a color palette of mustard yellows, deep reds, and greens. For Jenny, this seemed a bit too traditional. “One day, when we were at the design center, I suggested we create a seasonal palette,” she says. “What if the four bedrooms reflected an unfurling of the Maine seasons and the living areas were indicative of the weird in-between periods of the year, those fifth and six seasons?”

This, it turned out, was an agreeable proposition for everyone. Mary Ellen has a particular love for autumn, so Jenny helped fill the owners’ suite with tones that felt “like an homage to the original palette,” she says. The upholstered headboard is a rich ruby red reminiscent of maple leaves in October, and the textiles range in color from light birch-bark beige to dark chestnut brown. Every one of the bedrooms was given a different botanical wallpaper that would evoke the appropriate season, installed on a single accent wall, plus throw pillows and art that features botanical patterns and scenes. “When you look at the bedrooms, they’re very distinct,” Jenny says. “But there is a common theme that runs throughout.” They are also joined visually by the formality and weight of the furniture. While Jenny leans contemporary, Mary Ellen and Don are both a bit more traditional in their aesthetics. The house represents a meeting of minds, where playful cabinetry (designed by Jenny and built by Rondeau Woodworks) uplifts the owners’ suite bathroom, and a graceful, classic stairwell grounds the design in history.

While the past is present in every board of the lodge house, there are little nods to the future, if you know where to look. The Pattons approached this build with dreams of hosting big parties and frequent visitors. Although that’s been put on pause due to COVID, Don remains certain that wining and dining aren’t off the table forever. “We have friends in the United States and Canada, and the house had to be designed to allow everyone in one big space for dining and entertaining,” he says. “We expect our friends will be here as soon as we have a vaccine and people can travel again.” And the house will be ready. On the first floor, there’s a spacious dining room table made by woodworker Tim Hill using sunken salvage logs dredged from Moosehead Lake, and a long copper bar that sits beside the audiovisual center. (“Our kids wanted a full-fledged bar for their friends, and we needed good music and video,” explains Don.) While there are no grandkids to speak of yet, Jenny knew the couple planned to host small children at some point, so she created a sweet little reading nook complete with “fairy boxes” for Mary Ellen. “In the drawers underneath, there are kids’ books from when her kids were younger,” Jenny reveals. “I really liked that she was always thinking about family. We made this as a loving nod.” Whimsical, hopeful, and custom crafted—that’s the house, in a nutshell. 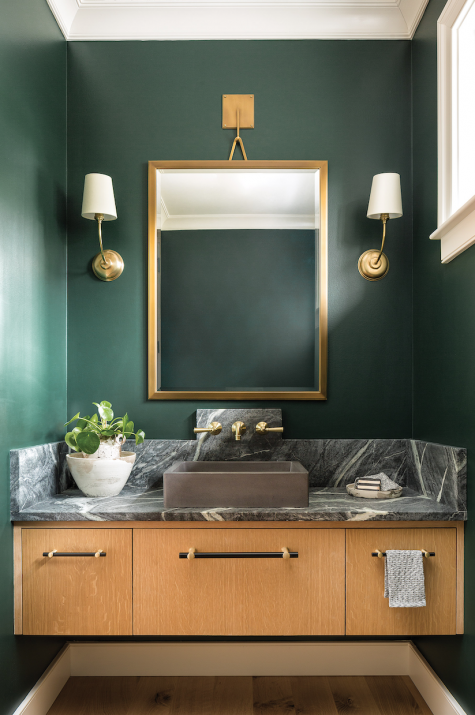 All cabinetry was done by Rondeau Woodworks. The floating vanity, paired with rich green paint, gives this bathroom a sleek, contemporary feel. 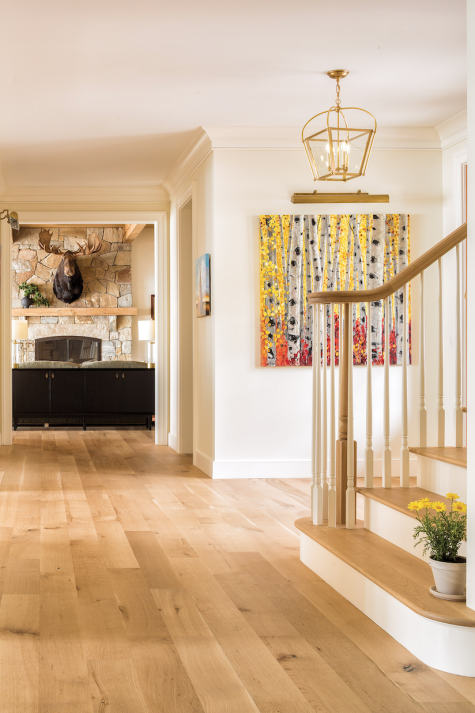 The staircase was designed by Frank Klepitsch and serves as one of the more traditional design elements in a house that straddles the line between classic and contemporary. 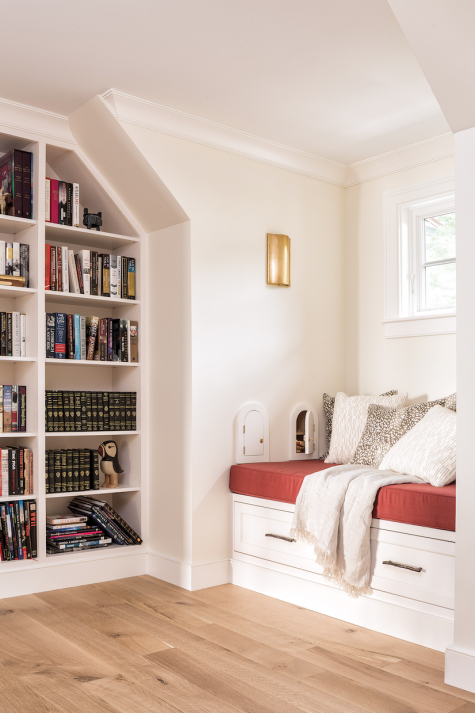 Jenny knew the homeowners were hoping for grandkids someday, so she created this sweet little reading nook complete with fairy doors; the cabinetry was done by Rondeau Woodworks. 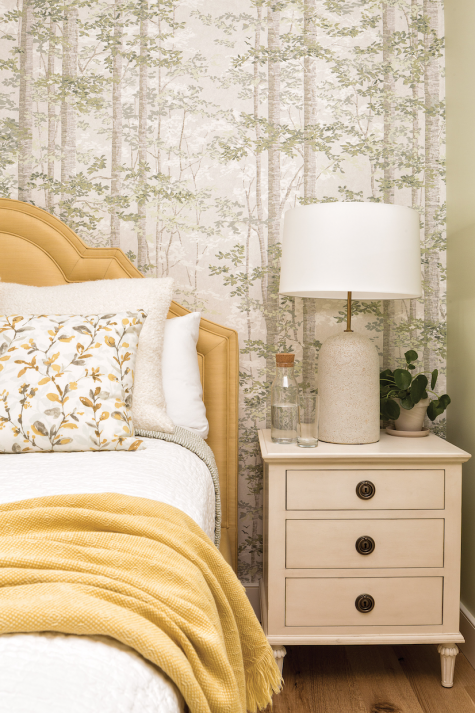 Each of the bedrooms has a seasonal theme and corresponding wallpaper; this summery room features wallpaper by Lewis and Wood and a bright yellow upholstered headboard.