An Architect Grows in Brooklin 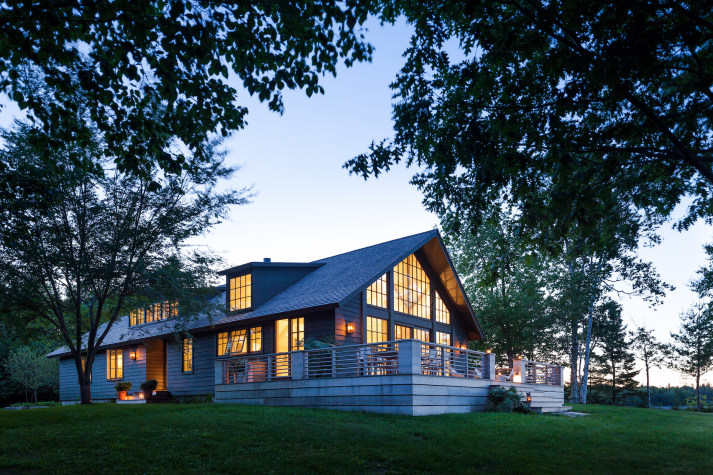 Schafer’s architectural interventions, aimed at opening up the house and filling it with light, included capacious new windows and added dormers. 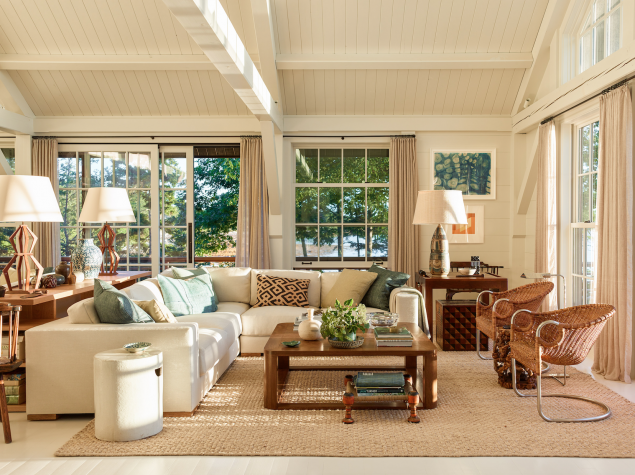 The living room features a sofa custom designed by Gil Schafer, an antique walnut table, and a pair of 1970s wicker and chrome chairs. 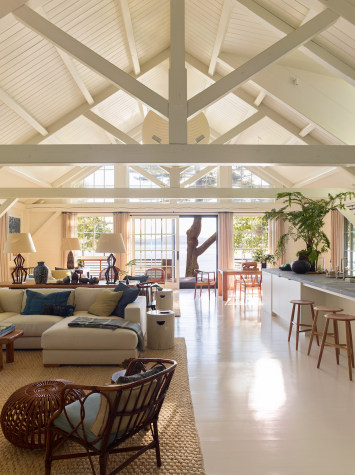 Gil Schafer configured the living room to have two seating areas: one looking out at the water and the other for more intimate nighttime conversation. 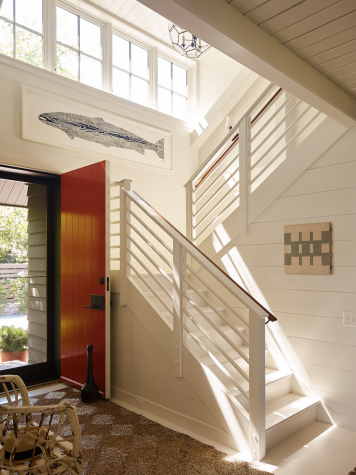 Gil Schafer set the stage by painting much of the interior a soft, sea-friendly shade of white, and by designing a banister that speaks to the nautical traditions of Maine.

One summer day, the New York architect Gil Schafer happened upon this house—an unremarkable modified A-frame in Brooklin. It had red-painted shingles on the outside and orange-stained wood throughout the interior. Still, it was in an extraordinary setting, an irresistible seven acres on Blue Hill Bay looking out to Mount Desert Island, and both the land and the view fortuitously were protected by strict conservation easements. Schafer bought it. “It’s not the house I’d dreamed of, but it was sort of architecturally muted,” he says. And yet he thought, “I can do something with it.”

His lifelong connection to Maine was a powerful lure. He spent summers here as a child and returned again and again over the years, as a renter with his interior designer wife, Courtnay Daniels, and her two teenagers, his stepchildren. “I’d long wanted to get Maine back into my life,” he says, though he had been satisfied with renting—that is, until he found the house he has dubbed Eastwater. “Suddenly my later-in-life plan to spend August in Maine became a mid-life plan,” he says.

Built in 1992, the house did not boast any specific architectural inclination. “It was sort of barnlike if you want any reference,” he says. The design, if you could call it that, contradicted almost all that makes up Schafer’s highly regarded body of work. He is widely known for his refined and elegant historicism, renowned for designing new classical houses and restoring important works of early American architecture.

Here was a challenge, he says, a house “that was not even from a century I work with.” Any misgivings were momentary, however. He knew he could lift it up. Plus, there was the bay, and the view, and seven acres that would offer quietude and even seclusion.

Schafer is particularly known for his ability to adapt the principles of traditional architecture to today’s lifestyle, an approach that is both pragmatic and philosophical. His work has always elevated less tangible architectural values of comfort, custom, connection, and memory as well as more measurable ones such as scale, proportion, and detail—a philosophical approach outlined in the two books he has written on the subject, A Place to Call Home and The Great American House.

Achieving all that was a challenge, both inside and out. The parameters of conservation easements meant that Schafer could not increase Eastwater’s footprint, but that did not daunt him. With some deft moves he made the house more compatible with the landscape and gave it a more spacious feel inside.

With the help of the British colorist and designer Eve Ashcraft, Schafer selected a perfect color for the house, and the offending red shingles were replaced with wide-plank clapboard siding painted a far more muted “piney olive green” in the spirit of the Rusticators, who built cottages and camps along the coast of Maine a century ago. As a nod to both modernism and his architectural education (not to mention his love of color), Schafer painted the front door “vermilion-orange-red,” a shade by Farrow and Ball called Charlotte’s Locks that reminded him of the brighthued carpet in Paul Rudolph’s Art and Architecture Building at Yale University. Railings on the outside deck (and repeated inside) provide a nautical reference, further connecting the house to its coastal location.

Inside, he painted the ubiquitous (and to Schafer, an eyesore) orange-stained trim work Sea Pearl from Benjamin Moore, a soft and luminous shade of white, transforming what had seemed heavy-handed into an exuberant expression of architecture and structure. He removed the drywall that covered the walls, cladding most of them in white-painted tongue-and-groove board. A lover of bold color, Schafer held back in this house, opting instead for muted hues of beige (C2 Paint’s Paddywack) and blue-gray (C2 Paint’s Dorian Gray). Throughout, the floors are two-inch strips of maple, which were stained. “It made the whole house look like a basketball court,” Schafer says. In consultation with Ashcraft, he painted them the same Sea Pearl white.

Schafer was also able to insert dormer windows on the second floor, opening it up enough to add a small study and create a comfortable guest bedroom. He replaced the inexplicably low windows with much taller ones, infusing the house with light and opening to the intimate yet long views of the bay.

The second-floor guest bedroom, which is tucked into the new dormers, has fabric-covered walls, in a linen print by the British designer Penny Morrison, fitted between the beams “to make it all feel cozy and a little softer.” For the study, Schafer found a skilled refinisher who turned the plywood paneling into faux dry oak intended to look “like it’s been exposed to the weather a bit and has warmth and character,” he says.

Downstairs he opened up the floor plan, creating a great room that flows from living space to cooking and dining. The trussed and beamed great room features two seating areas— one that looks out to the water while the other cozies up to a fireplace. The spacious kitchen has granite countertops, a nod to New England, and bronze cupboard pulls, which like the railings reference the seaside location of the house.

When it came to furnishings, Schafer’s world of Americana just did not feel right. His goal was to be sure the house was “not overdone, not overdecorated” and to “fill it with eclectic, quirky furniture.” He opted for a restrained Danish-inflected midcentury look with moments of eccentricity and some surprises in the mix. Other pieces, many of them of his own design, were new and often made especially for the house. “I thought that, if I’m going to spend every August in Maine, I want it to be a completely different environment.”

He began looking around, sourcing vintage furniture from antiques dealers and auction houses far and wide. Closer to home, an idiosyncratic painted twig chair came from Hudson, New York, as did a midcentury rattan chaise that Schafer discovered at Arenskjold Antiques Art. A high-backed twentieth-century chair and a mirror in the style of Nakashima both came from East Hampton. Still other pieces came from some of the venerable midcentury design dealers to be found in Los Angeles, among them JF Chen, Blackman Cruz, and Orange Furniture. “I love shopping in LA,” says Schafer.

At Blackman Cruz, he found a pair of wicker and chrome chairs from the 1970s with a distinctive look but no known provenance. And from Orange he acquired a 1960s vintage Italian settee. Schafer bought six vintage Wishbone chairs designed in 1944 by Hans Wegner at JF Chen. He was planning to pair them with a handsome, sturdy contemporary table from Crate and Barrel. To his chagrin, he discovered that the older Wishbone chairs were too short for the table (in the past 75 years, almost everything has gotten bigger). Schafer’s solution was to lower the table. Along the way, he discovered that the Wishbone chairs sold now are indeed scaled larger, but to Schafer they were not the same. “I love old things,” he says. “I love knowing that I have something that has been used and cared for by others. Otherwise it doesn’t feel like there’s soul to it.”

At Eastwater, the old is mixed with the new, carefully selected and lovingly positioned. And one thing is for sure: there is no shortage of soul. 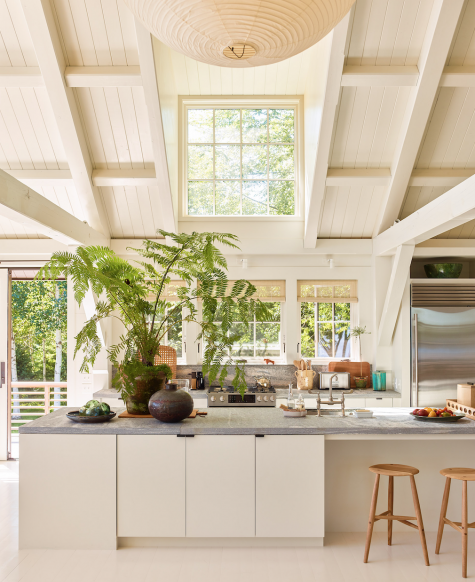 The kitchen, which was also intended as a gathering space for family and friends, features thick flame-finished northern granite countertops. 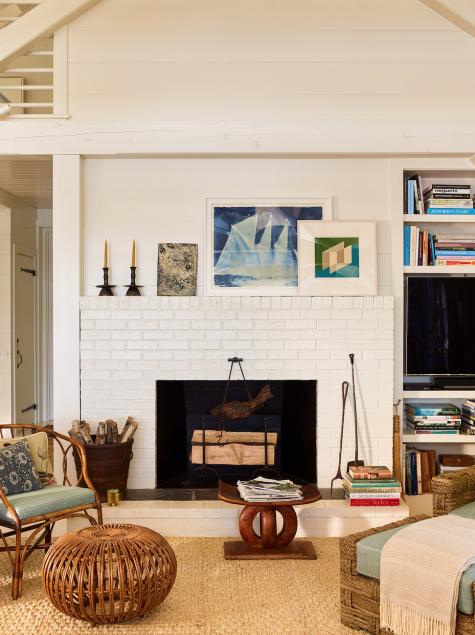 A rattan chair, a midcentury pouf, and an African stool (used as a coffee table) punctuate the seating area in front of the painted brick fireplace. 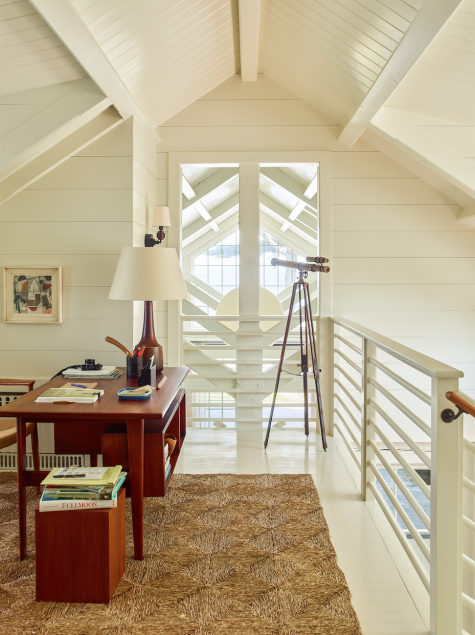 Schafer bought the antique brass telescope some 20 years ago and kept it on the third floor of his house in the Hudson Valley. It’s now put to much better use in this hallway study. 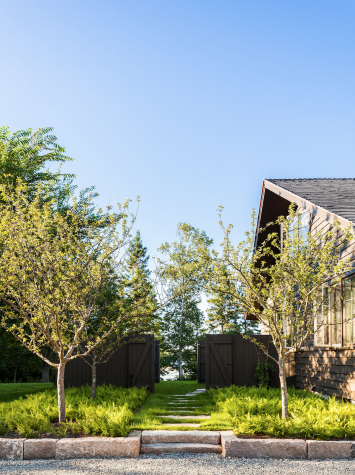 The garden features a crabapple orchard with a sweet fern ground cover. 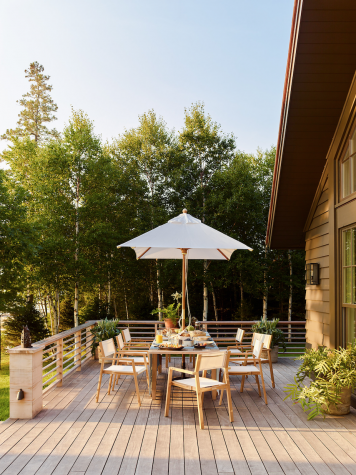 The deck is furnished with a hammock from L.L.Bean, a table from Crate and Barrel, and a market umbrella from Pottery Barn. 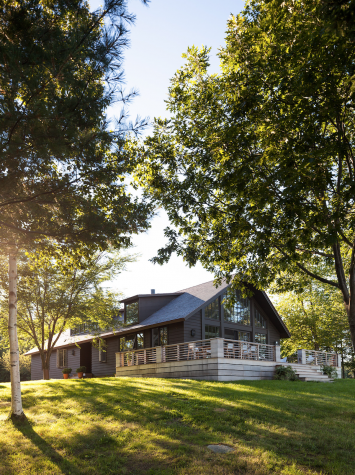 By law, the footprint of the house could not be altered, so it was reclad and painted to fit into the traditional Maine palette. 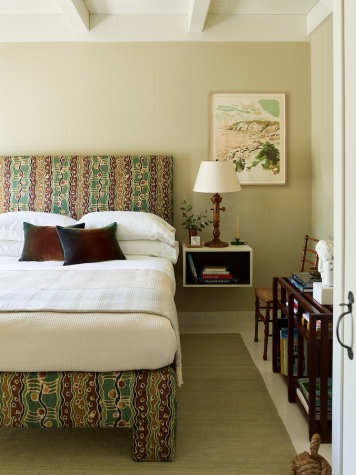 The bed and headboard in this guest bedroom are upholstered in Robert Kime’s Russell line. Schafer designed the bedside tables to seem to float above the space. The painting is a print of Fairfield Porter’s 1975 watercolor Isle au Haut, which was a gift from Schafer’s wife, Courtnay Daniels. 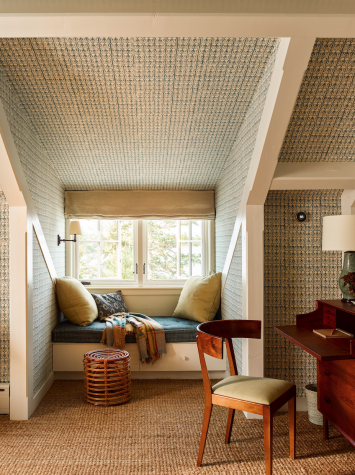 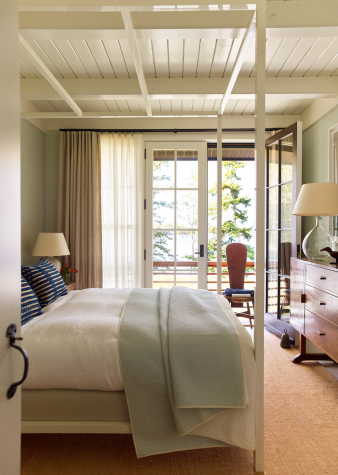 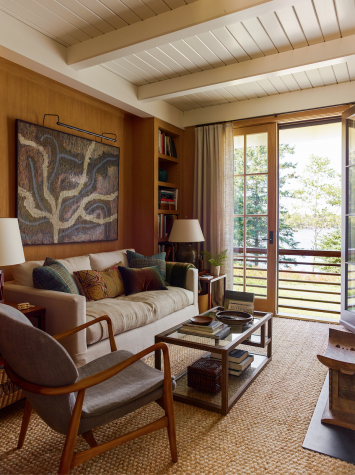 The library features a midcentury chair from Blackman Cruz and a 1970s brass and glass coffee table from JF Chen, as well as a custom tuxedo sofa that Schafer designed; the abstract painting dates to 1961. 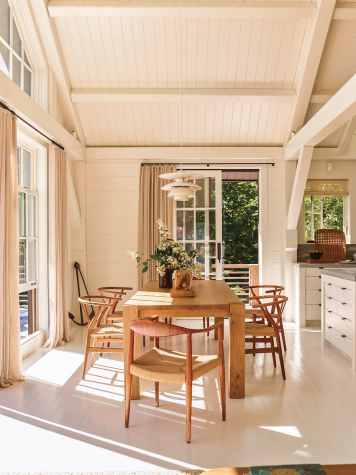 A Hans Wegner chair—most often called “The Chair”—sits at the end of a sturdy white oak table called “Big Sur” from Crate and Barrel.