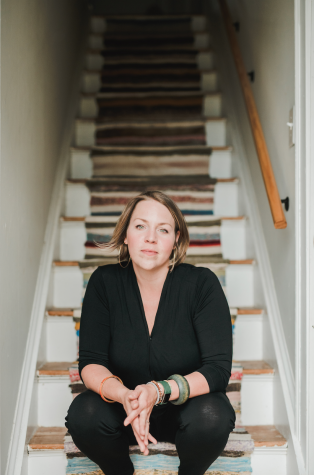 Christina Watka on the stairs of her circa-1790 Cape Elizabeth home. 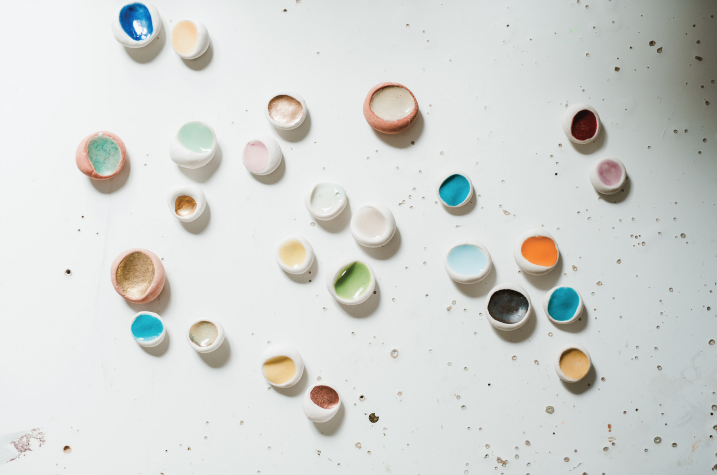 She assembles her Murmurations installations from hand-formed porcelain beads into which she presses her thumb before glazing in a rainbow of colors. 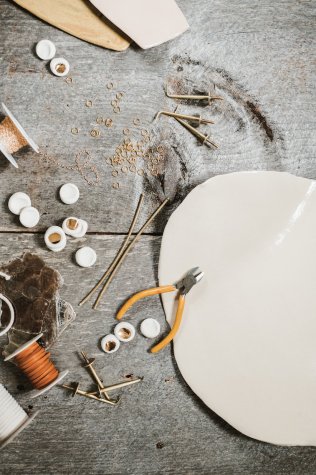 Tools of her trade also include sheets of mica and chain links. 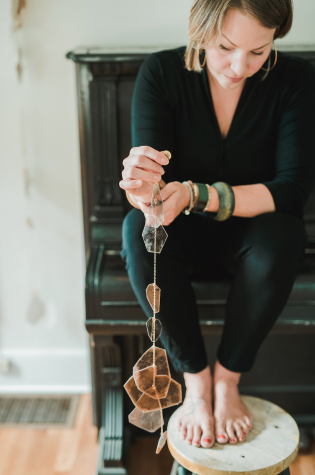 Watka holds a strand of mica sheets on brass chain, one element in an eventual kinetic sculpture for the Lightness of Being series. 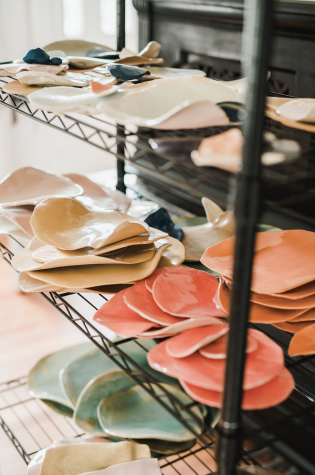 Stacks of glazed irregular porcelain discs are destined for a wall installation in her Kaleidoscope series. 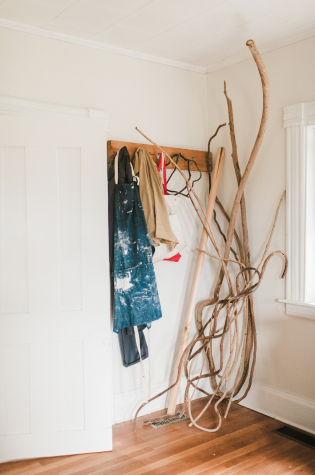 For her Root Systems, Watka forages for wisteria vines.

Christina Watka gives a visitor a tour through her eighteenthcentury farmhouse in Cape Elizabeth to the studio where she creates her ethereal installation art. Across the driveway are the scattered remnants of a barn she and her husband, Andrew Halchak, a firefighter, have just dismantled. One day, she says, her “forever studio” will rise in its place, and it will include a music room for Halchak, who is also an accomplished jazz musician. “It’s 1790,” she explains of the home, “one year older than the White House! There’s not a straight angle in the place, which I love.”

Sure enough, the bow in the creamy white ceiling of the studio is immediately apparent. The couple’s children—three-year-old Jack and fourand-a-half-month-old twins Sonny and Lucy— are napping. The only sounds are the buzz of insects and the ribbit of frogs across the road in Spurwink Marsh, which is spectacularly livid with purple loosestrife under a cloudless blue sky. “That marsh is just as important as the studio,” says Watka. “I’m drawn to naturally occurring patterns in nature: flocks of birds, bacteria, blood cells.”

Watka’s installations employ a variety of materials—and a staggering degree of hand work— to convey these patterns. For her Murmurations pieces, she hand-forms porcelain globules that she presses with her thumb, then glazes in different colors and in gold. Her Lightness of Joy series consists of room-spanning mobiles made from brass and iridescent sheets of mica.

Kaleidoscope is a group of assemblages of wavy, variously sized and colored clay discs (stacks of them sit on shelves pushed up against an old Stein – way upright piano the couple discovered in Biddeford). Etsy commissioned Watka to create a ceiling installation at their Brooklyn headquarters, drawn from her Dichotomous Air series, which brings together mica and copper in an endlessly fascinating, ever-changing exploration of light and shadow (another subject that informs much of her work). A jumble of wisteria vines stands in a corner of the studio waiting to become one of Watka’s Root System wall sculptures.

Watka was born 34 years ago in Twentynine Palms, California. “I was always very creatively minded,” she recalls. “I explored it in different ways—through acting, writing, singing.” She was also constantly rearranging her room, an impulse that at least partly led her to enroll at Boston’s New England School of Art and Design for a degree in interior design. After her first year, her teachers encouraged Watka to enter the fine art program. “I was very interested in exploring things with my hands and my body,” she says. “And because of my background in theater, I also wanted to express myself in larger spaces.”

During her four years there Watka met Halchak, who was studying nearby at Berklee College of Music. By graduation in 2009, Watka found herself drawn to the installation art movement that was gaining momentum through artists like Andy Gold – sworthy, Rachel Whiteread, Doris Salcedo, and Tara Donovan. She got a job doing visual displays at Anthropologie, and then, after she and Halchak decided to test their creative mettle in New York in 2012, as district display coordinator for women’s boho clothing emporium Free People (part of the network of stores such as Anthropologie and Urban Outfitters under the URBN umbrella). “My creative brain was always working,” she says. “I felt charged and energized to go home and create my own work.”

Halchak’s mother, a ceramicist and art teacher, taught Watka to use porcelain. While still in Boston, the artist says, “I started looking for opportunities to display my work.” Initially, that opportunity came through 12 Chairs, a home design store on Tremont Street (she is now represented by the design gallery Salon in Beacon Hill). Shots of customers’ purchases from the store often featured a Watka installation in the background. Once these hit Pinterest and design blogs, “things just snowballed” as Boston-area designers discovered her work, Watka recalls. Her first commission, for a Boston townhouse, initiated the Murmurations series. (A murmuration is a flock of starlings, and indeed, these works emanate the graceful motion of birds in midair.) “It’s important to me—even though they are literally adhered permanently to the wall—that my pieces have a kinetic sense and feel as though they could burst into flight at any time,” she explains.

Equally important is Watka’s process, she adds. “Each piece goes through my hands or my assistant’s hands six times—forming, buffing, bisque firing, glazing, a second firing, and then installation. If I’m using 22-karat gold, there’s an extra glazing and firing step.” This might seem tedious, but, she observes, “It’s like a mindfulness practice. If I can get two hours in the studio, a godsend, I can totally recharge by sculpting shapes. Having three kids under three really challenges mindfulness.” Another reason the Spurwink Marsh is important to her: it is a source of natural beauty and calm.

In 2019 the couple moved to Cape Elizabeth to be closer to their families, who had settled in New England. Halchak discovered he loved being a volunteer firefighter and eventually took it up professionally, though he still creates music as well. Watka’s work has evolved considerably since her first Murmuration and now splits pretty evenly between commercial and residential commissions. Aside from movement, she is spellbound by light. Hence her work with materials that reflect and refract it. “I use specific glazes that respond to light by creating shadows and reflections,” she explains. “Mica is reflective, but it also refracts light, and the shadows it creates on the wall are colorful.” She often pieces out her compositions with the aid of a computer, but, she points out, “It’s pretty intuitive. I respond to the space the work will live in. It’s very site-specific. The pieces lend themselves to odd spaces because they work their way around any kind of architecture.” 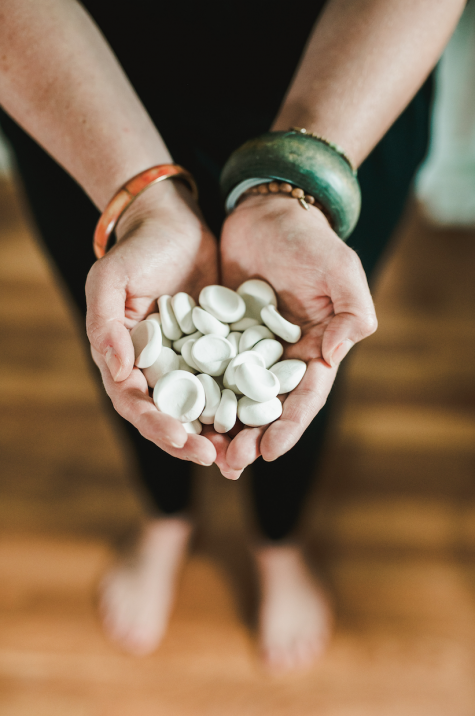 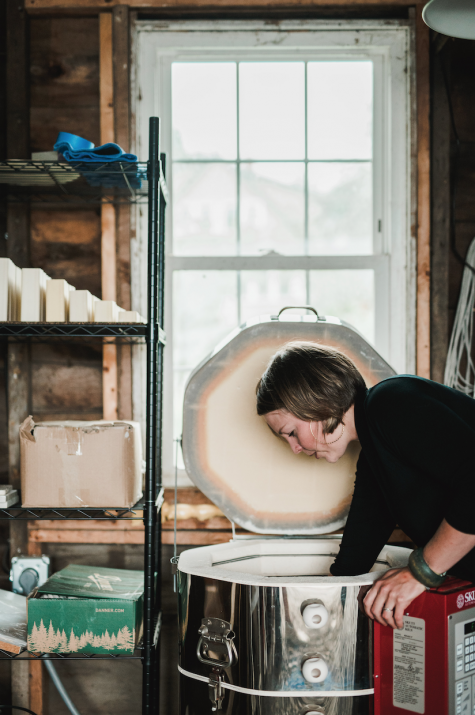 Watka at her kiln in the home’s garage 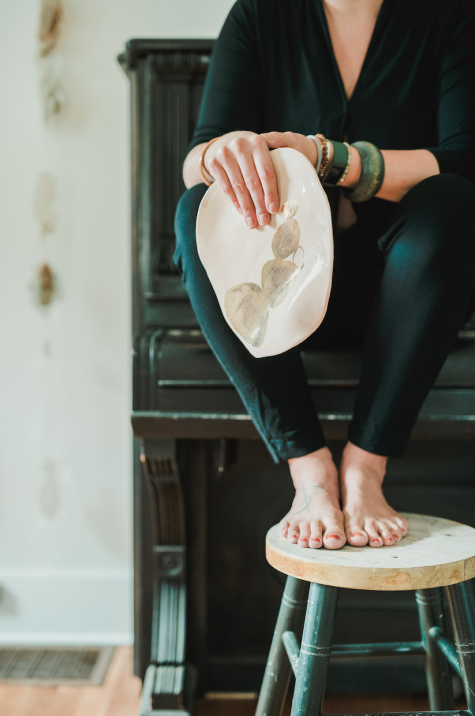 One element of an eventual Kaleidoscope wall installation