From lobster shack to “she shed”— a tiny Kittery Point renovation made a lot of difference for a woman craving a room of her own. 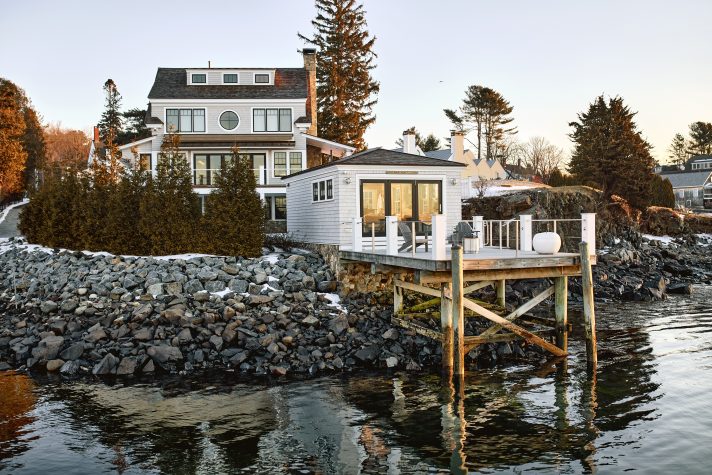 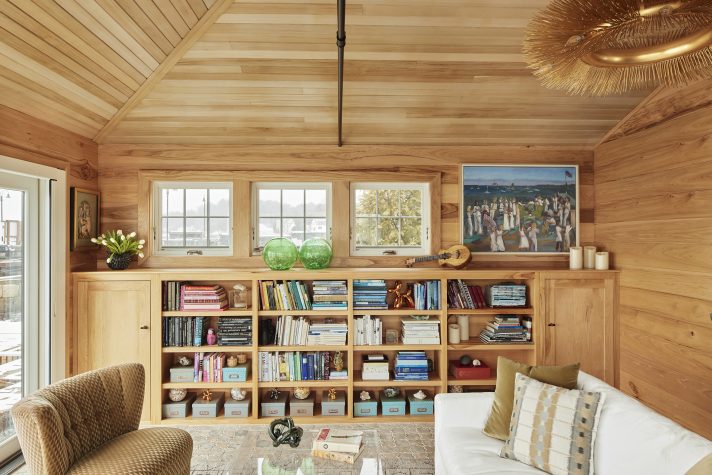 Carpenter Jamie Gowing built the bookshelves under clerestory windows that provide privacy from the public dock next door. The chairs are 1940s Scandinavian. 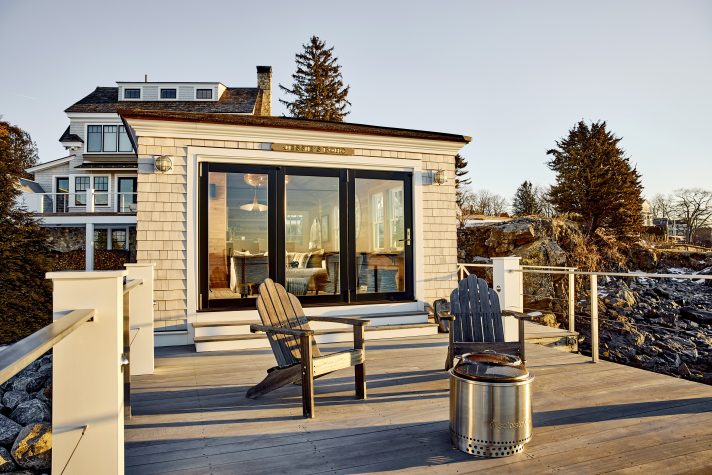 What kid hasn’t been occasionally booted out of their room onto a La-Z-boy in the den to accommodate their parents’ overnight guests? It’s a small childhood indignity, but one we usually accept with a roll of the eyes and a shrug. For Jessica McKeon, however, this situation felt more like the norm than an infrequent inconvenience. “I never had a room of my own, and it was never just us,” she says. “Since my sister and I had the nicest room, we’d be kicked out regularly to sleep on a sofa somewhere.”

McKeon grew up in a converted Maryland barn with four siblings and parents who were active in their church community. Her mom and dad often foster-parented juvenile boys and, since they also functioned as counselors for their congregation, took in church members who were going through marital or familial difficulties. They also rescued animals. If a duck abandoned her eggs, McKeon’s parents would bring them home and hatch them in the fireplace.

So, when she and her husband, Paul, went looking for an oceanside escape from their busy life in Portsmouth, McKeon says, “I had been dreaming of a space of my own.” They looked up the coast but decided they would use their retreat less if it were farther away. When she happened upon a listing for a cottage on Pepperrell Cove, just ten minutes from their condominium across the bridge in New Hampshire, she was intrigued.

The cottage had been built in the 1890s and sat right on the harbor, but that was not the main attraction. It came with what at one time was a lobster shack built on stilts right over the water. The structure had gone through many renovations since then, at one time serving as a boathouse, but was then being used as a utility shed and workshop. “The moment I saw the listing I wondered if this might be the private room I dreamed of,” remembers McKeon. “Seeing it in person confirmed it for me.”

“My husband said I could put a foldout couch in it,” she continues. “But I didn’t want it used for a bunkhouse or a guest room. I shared a room with my sister. I had my first daughter at 21. Once you get married and have kids, you share everything.” A room of her own was so important, in fact, that rather than tackling the main house first, the couple began by renovating the tiny 300-square-foot outbuilding into a “she shed,” as McKeon calls it. (It’s also referred to as “Jessie’s BoHo,” short for “boathouse.”)

The couple met with their architect, Brendan McNamara, and designer Diane Hart to sketch out a plan. “Brendan was skeptical about the mold, moisture, and mildew,” recalls Hart. “So I came up with doing all-wood walls and ceiling, treating it like a boat, but not in an obvious Maine-themed way.”

McNamara also points out the challenge of the miniscule proportions. Because it dates to at least World War II by his estimation, many grandfathered aspects—not least its position right on the water—would be lost. “We couldn’t expand the volume or make substantial changes in its appearance,” he says. “So, you have to make the most of the interior. That was when we decided to cathedralize the ceiling,” to give the space a sense of height and openness. This required a tie rod system to hold the walls together under the weight of the new ceiling.

The existing bathroom was “pretty terrible,” McNamara recalls, so it was reconfigured. The shack had a utility sink that was also moved, becoming the sink in a new entertaining bar. “We changed the windows to maximize the view,” he explains, adding larger spans to the east toward the sunrise and a full wall of accordion doors out to the deck and dock. There was a public dock to the west, so, says McNamara, “those windows are higher to maintain privacy.”

All this, points out builder Bill Brown, required measures “to get it stabilized so it would hold up for another 50 years. We needed engineered lumber beams, especially over the doors to the deck because that opening was 12 feet long.”

Inside, Brown stripped all the quarter-inch paneling and replaced it with Hart’s choice of hickory wood. “I wanted to balance the boathouse idea with Jessica’s personality,” explains Hart. “From the moment I met her I was mesmerized by her elegance, poise, and grace. She reminded me of an English royal.”

To address that side of the aesthetic scale, Hart punctuated the room with glamorous lighting. Though not obvious from the gold finishes, the lighting actually relates to the nautical theme. The chandelier over the sitting area reminded Hart of an osprey’s nest, while the pendant over the bar is shaped like a boat. Had this subtle relation not been there, this level of sparkle and elegance might have looked out of place.

As it is, they feel in harmony with the natural materials. “We wanted to keep it pretty organic,” says Hart. “It’s all natural materials, like the hickory and tile floor, which are made of tumbled limestone in a worn-looking Moroccan pattern so it feels like it has been here for a long time.”

McKeon planned to use it as a place to sit and contemplate, where she could read and write poetry. “I can’t be distracted,” she says of her writing. “It has to come from someplace deep inside you, and you need to be quiet and still.” But she also hosts gatherings for her girlfriends in the she shed. Both of these necessitated a lot of function be built into the space.

Books—about art, poetry, literature (particularly German literature, which McKeon studied in college)—are obviously an important presence in her life. The solution? Below the west-facing windows is a wall-to-wall bookcase. On the opposite wall, carpenter Jamie Gowing designed and built a collapsible table where McKeon can peruse books, look out at the water, and when the spirit moves, write.

For entertaining, open shelving by the bar holds glassware, and parallel countertops of a stunningly figured Michelangelo marble offer prep surfaces for snacks and hors d’oeuvres (beneath one counter are refrigerated beverage drawers).

It’s quite a transformation. From the water, it looks like many of the cedar shingle-clad lobster shacks and boathouses dotting the cove. The only hint of its role as a place to nurture female energies is a sculpture of an apple on the deck. There are also apples inside —an allusion, McKeon observes mischievously, to Eve and the Garden of Eden.

“I’m trying to be more deliberate about how I spend my time,” says McKeon, who got a “wake-up call” nine years ago when she required open-heart surgery. “It’s a gift for me, this space. It’s so hard to listen in your ordinary routine. I come here to listen—to the ducks, the water, the trees, and to what’s going on in myself.” 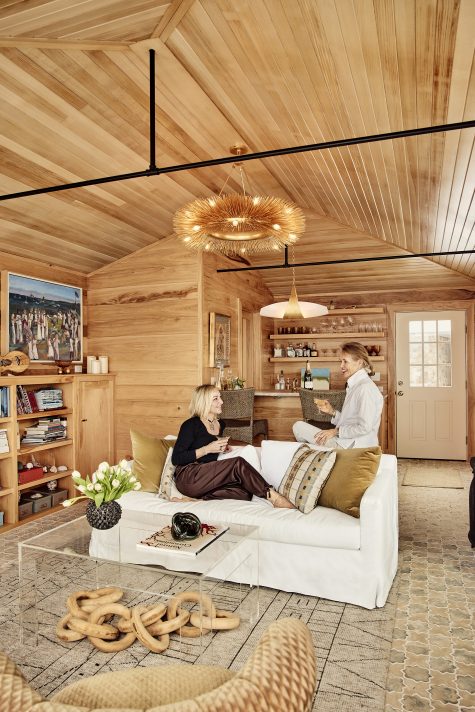 Diane Hart (at right) and her client Jessica McKeon in the “she shed.” Hart clad the entire interior in hickory paneling and anchored the seating area with a neutral Moroccan rug. For the painting at left, which depicts a party McKeon threw for girlfriends on the deck, she hired painter John Bukaty from New Orleans. 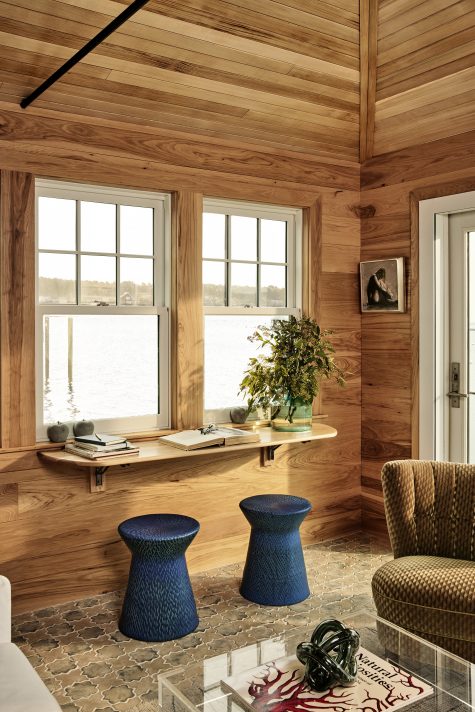 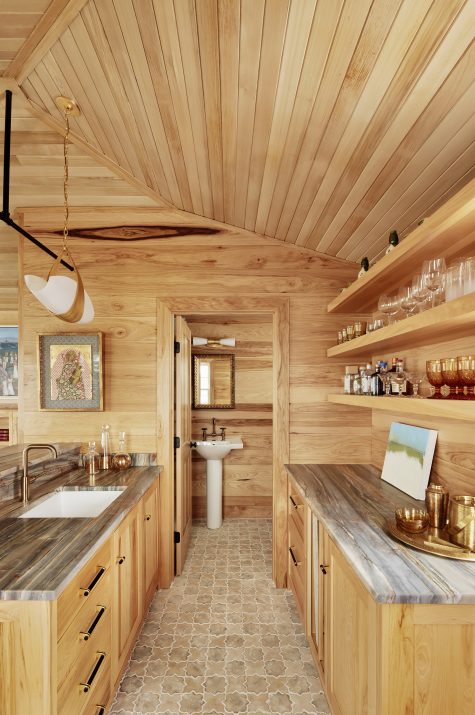 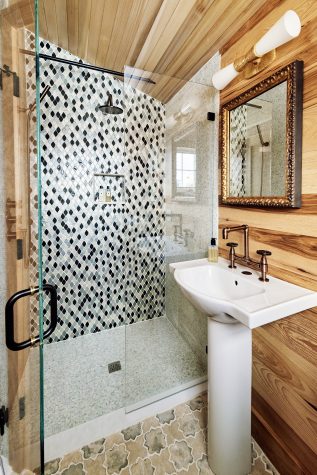 Bath fixtures are from Ferguson. 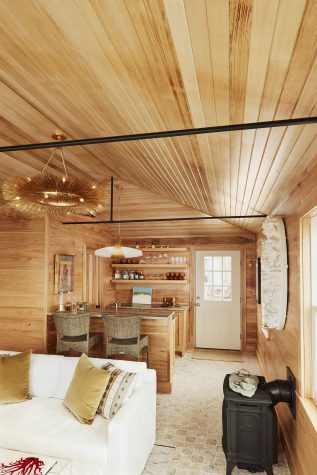 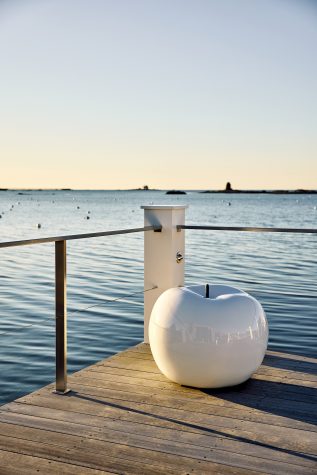 An apple sculpture on the deck is a nod to Eve and the Garden of Eden.