A little lofted beach house gets an imaginative upgrade (and winterized walls!). 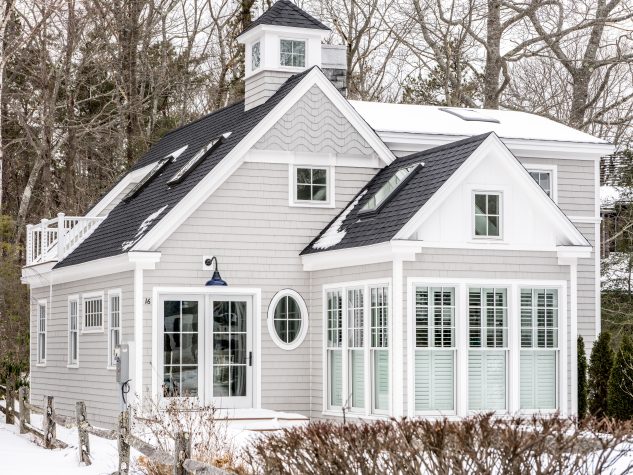 With winterized walls and thoughtful window placement, this house is now ready to brave the cold. 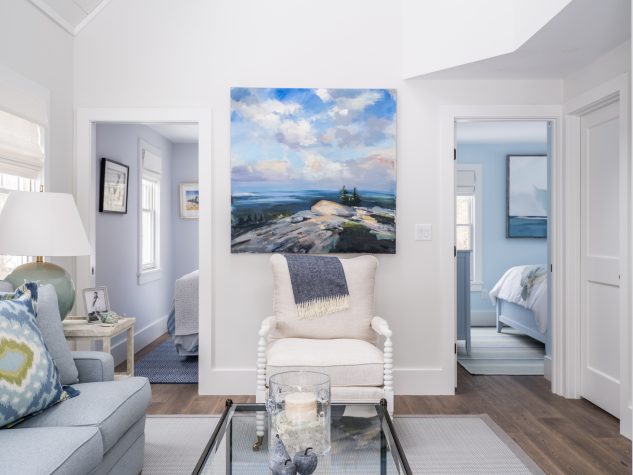 The living room of this charming Goose Rocks cottage features a Craig Mooney seascape in a place of honor. It was this painting that inspired the color scheme for the renovation. The spool chairs are from Hurlbutt Design. 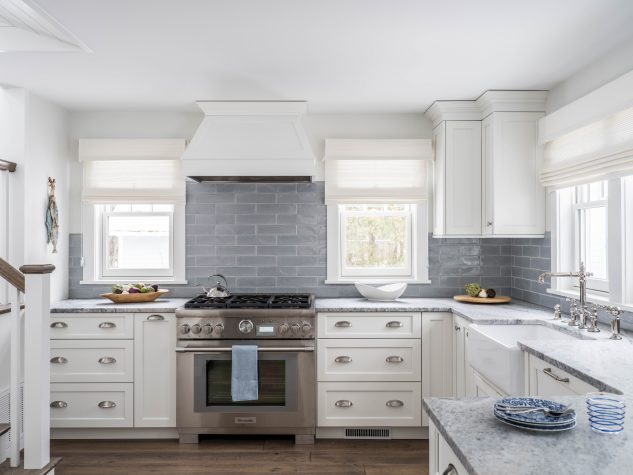 The kitchen is an oasis of calm in blues and grays. The tiles are handmade porcelain, which accounts for that appealingly soft texture. Cabinetry is by Sylco, and the flooring is engineered wood. 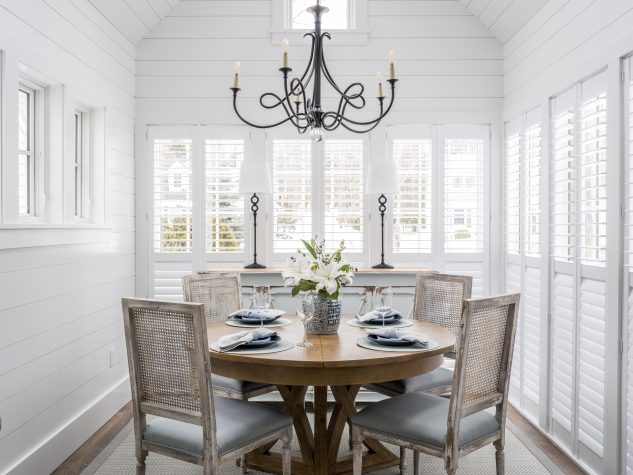 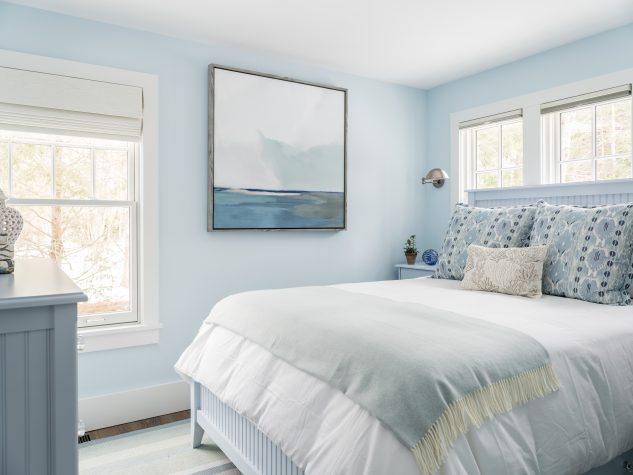 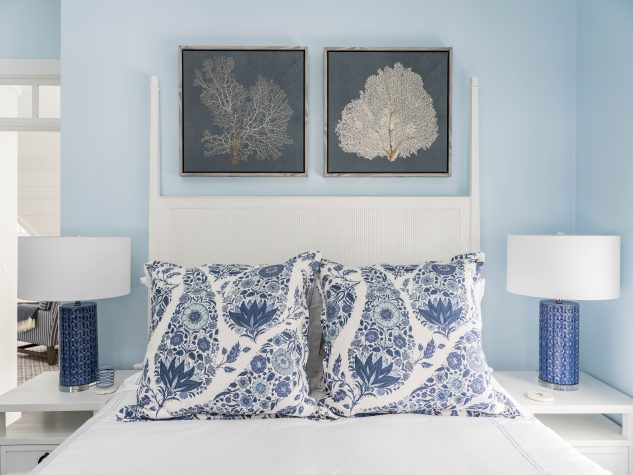 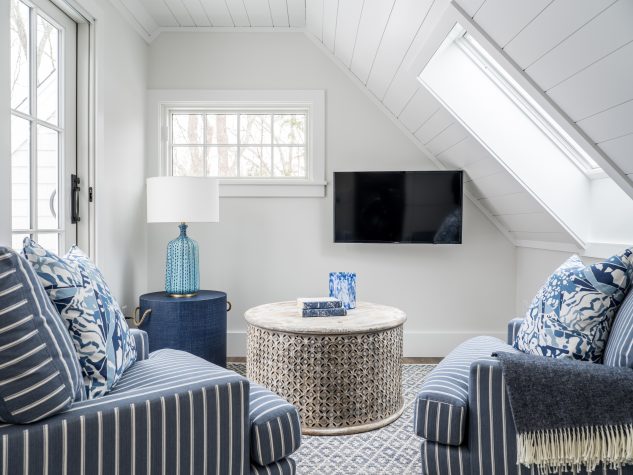 Sometimes, an entire home hinges on one focal point: a bay window, a dramatic staircase, a complicated bit of masonry. In this case, it’s a painting. Greg and Tracey Tuthill were at Maine Art Hill in Kennebunk when they saw a canvas that struck exactly the right chord. Like many of Craig Mooney’s works, it’s a dramatic scene: a seascape with frothy clouds, the Atlantic dark and vast. “It reminds me of being on top of Cadillac Mountain at dawn,” says Tracey. “But really it could be anywhere in Maine, and I love that. I didn’t want the house to be filled with seashells. I wanted it to reflect different seasons and different parts of Maine.”

The large canvas became a jumping-off point for the interior design of the Tuthill’s new coastal cottage near Goose Rocks Beach. Although the couple had been coming to Maine for over 20 years, this renovation represented a new chapter for them. “The old house had its charms,” says Tracey, “but we wanted to have something that was less of a beach house and more of a house-house.” They wanted to create a home that would be sturdy yet airy. They wanted to be able to visit in winter and kindle a fire (which meant they needed some fireplaces, plus new spray-foam insulation and windows). Tracey wanted to reflect a bit of their shared history with the state, and Greg, a sailor, wanted to see some nods to his nautical life. And they really wanted a bathroom upstairs.

Designed by architectural designer Erik Peterson and built by Creative Coast Construction, the compact house fits a lot into its 1,400 square feet. There are three bedrooms and two bathrooms, plus a living area, kitchen, and a bump-out dining room with huge windows that go down to the floor. “It’s so nice not to have to eat in the kitchen,” says Tracey. “That area used to be a deck, so turning it into a dining room gave us this yummy extra space.” Peterson adds that it is “essentially a glass room” that lets light pour into the blue and gray living space.

Light, he explains, was key to the overall success of the project. Usually, when we call a room “airy,” we’re talking about several qualities, the most important of which is size. But small spaces can feel open, bright, and free—if they’re designed properly. Although the cottage was always going to face the woods, there were ways to maximize indirect natural light. On the north side of the house, Peterson added cottage-style stacked windows to illuminate the staircase, and he kept the overall floor plan fairly open. When you walk in, you’re welcomed into the living area, which flows into the kitchen and turns toward the dining room. Tucked at the back of the house are the rooms for the Tuthill’s two grown children. “There’s a public zone and a private zone on the first floor, and it doesn’t cross over,” Peterson explains. “I think the house ended up zoned really well.”

While they were able to free up space by tearing out the centralized spiral staircase and replacing it with a more traditional setup, there still wasn’t a lot of wiggle room for builder Jonathan Trudo and his team. Not only did every board have to fit just so, but they also needed to plan ahead to ensure everyone’s safety. “With a house that size, you’re confined. You can’t take a board, put it on a saw, and swing it around without wiping someone out,” he says. “They take just as long as big houses because you have to do a lot of the work outside and then run back inside.” Plus, he adds, much of the construction was done during a pandemic. “It’s a hard thing to try and coordinate, to keep everyone not overlapping too much,” Trudo recalls. “Somehow I managed to do that over there even with COVID. That was interesting, now that I think about it. Not top of my fun list.”

However, Trudo did enjoy working with the architectural detailing Louise Hurlbutt added to the mix. After the Tuthills had Peterson draw up plans, they contacted Hurlbutt, whose signature style they knew well. “In the dining room, I added some old-world charm with the nickel-gap,” Hurlbutt explains. “It’s an old-world cottage, and to achieve that, we had to fine-tune some things,” like making sure the railing on the stairway matched the engineered floors. Trudeau calls this nitty-gritty stuff “the most fun part” of the project. He says, “I like doing that kind of detailed work. Upstairs, you have all those interesting angles with the roof to work with, which means a lot of problem-solving.” Hurlbutt also selected shutters (to add a layer of privacy to those big windows) and picked out the gray-toned floors. “In a house so close to the water, it’s a really good idea to have engineered flooring,” she says. Hard-wearing sisal rugs in the living room add a bit of visual texture to the mix while adding another dose of classic nautical style.

Overall, the idea was to create a space that would be cohesive and cheerful without feeling overly beachy or kitschy. For Hurlbutt and the Tuthills, color was key. “When you have a house this open, it’s so important that everything works together,” Hurlbutt says. After seeing the Mooney painting they had selected for the place of honor in the living room— “one of the few places that can accommodate a bigger work in that house,” adds Hurlbutt—she put together a palette of oceanic blues and grays, with the occasional splash of dreamy aqua. “We selected the countertops and tiles first,” Hurlbutt says, “then came the paint and textiles.” In the kitchen, she chose a Blue River granite with a leathered finish and, using colors found naturally in the stone, she selected a handmade porcelain tile in slate blue. “Leathered granite is good because it doesn’t scratch, and in this case, it looked just like the rocks at the beach. We were excited to see that,” Hurlbutt says. In the bathrooms, she chose slightly more dramatic tiles, installing two abstract marine mosaics, one upstairs, one down. “The one in our bathroom upstairs looks like a wave,” enthuses Tracey. “I love to see it. The blues are all so beautiful.”

While there aren’t many places to hang art, Hurlbutt did find ways to add interest to the refined design: an oar placed over a bed here, a couple of medium-size coral prints there, and a whole lot of plush, soft textiles. In the owners’ suite, there’s a striking pair of blue and white Kashmir delft pillows from Raoul Textiles in California. “My daughter helped pick those out,” says Tracey. “She’s very visual, and she knew right away those would look amazing with the rug Louise chose.” Throughout the cottage, Hurlbutt and her clients layered various patterns, from stripes to ikat to paisley, all in the same color scheme. The overall effect is calming and welcoming. More dreamy than beachy, like walking into a cloud.

Finally, to light the family’s revamped getaway, Hurlbutt selected three large chandeliers from Visual Comfort. In the dining room, there’s a classic candelabra shape with a bit of curly modern flair. The living room has an undulating metal f ixture that reminds one of a whirlpool—another nod to the water nearby. And above the stairs hangs a many-pointed large Moravian star. “I love that stairwell,” says Tracey. “It’s so beautiful. It’s so light. The entire house is so cheerful now.” Now, instead of simply spending summers by Goose Rocks, the family is coming up more often. “We were just up in the winter, and there was something about the quietness,” says Tracey. “It’s just comfortable.” 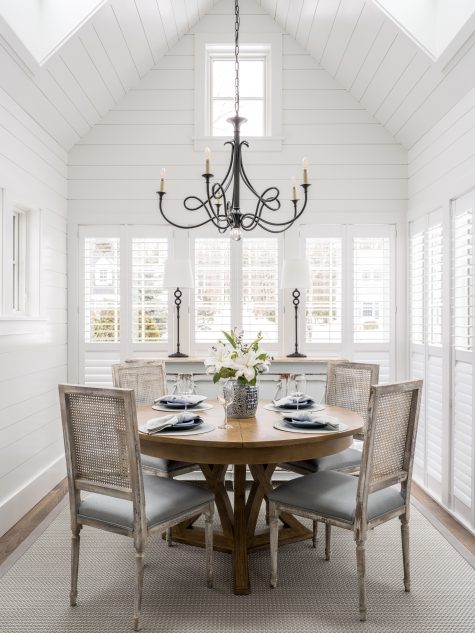 To gain extra space, architectural designer Erik Peterson designed a bump-out dining room at the front of the house. To add old-world charm, interior designer Louise Hurlbutt insisted on nickel-gap paneling, a chandelier from Visual Comfort, faux-finished cane-back chairs, and a Jupe table that was made by Sarreid for Hurlbutt Designs. 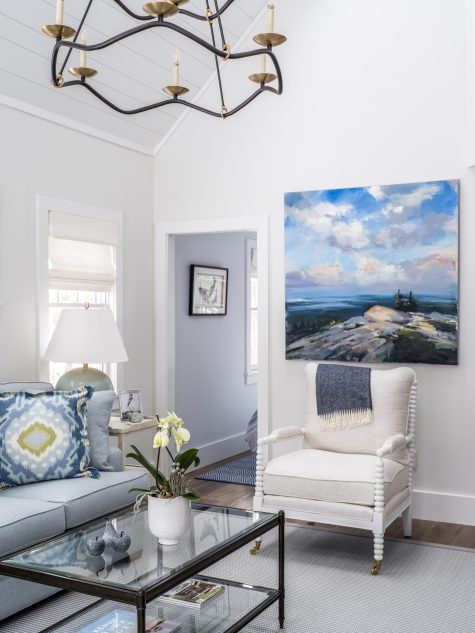 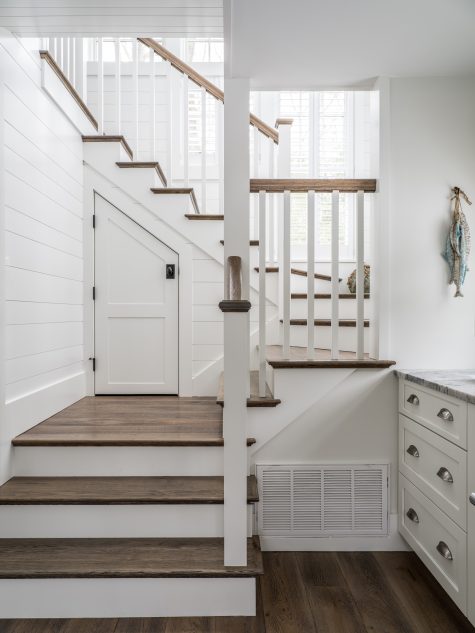 The house originally had a spiral staircase, which ate up a lot of space at the center of the home. 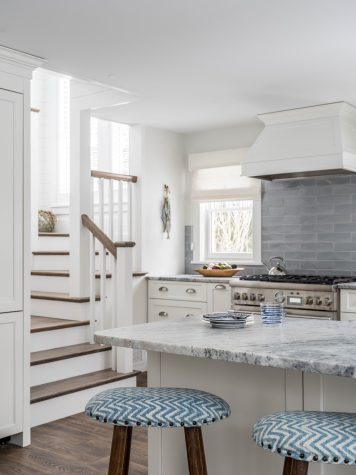 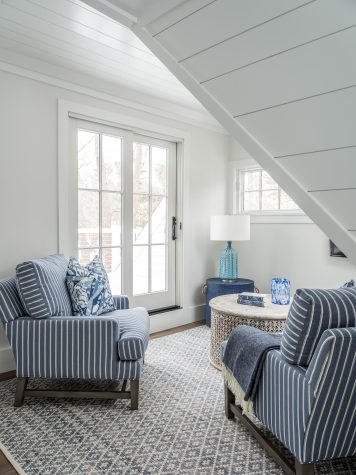 For Peterson, one of the biggest successes of this house is how well it accommodates an entire family and their friends with extra guest rooms. 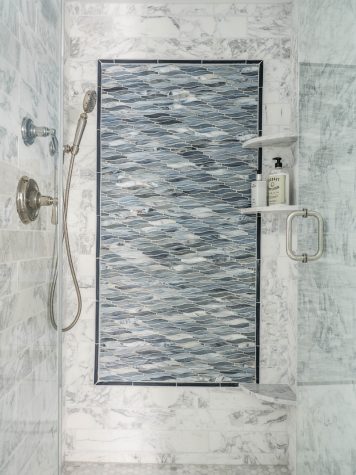 An abstract tile mosaic from Distinctive Tile and Design adds a bit of oomph to the compact bathroom. 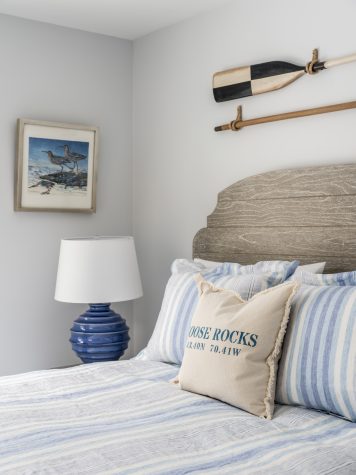 The owners’ bedroom features two plush pillows in classic Delft blue. “When you have a house this open, it’s so important that everything works together,” Hurlbutt says, explaining the classic blue-and-white color scheme. 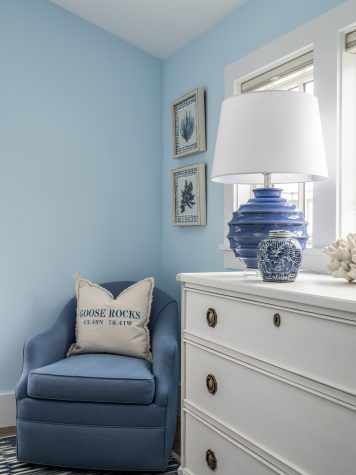 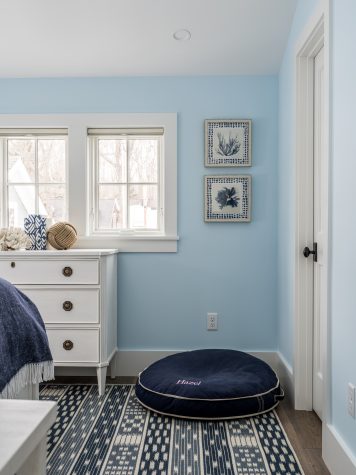 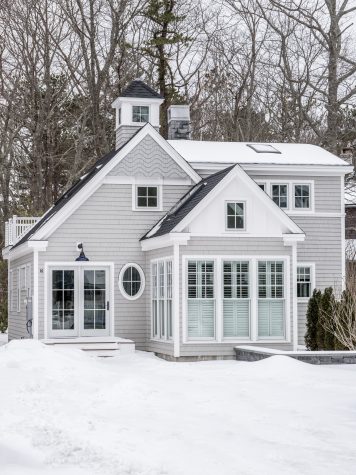