Lighting designer Brendan Ravenhill worked alongside his family to build a sauna moored at sea.

May, 2022 | Photography: Brendan Ravenhill | As told to Rachel Hurn 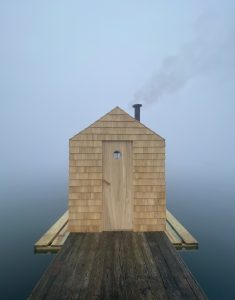 “In 2006 I started a nonprofit boatbuilding program, Islesford Boatworks, with my two siblings on Little Cranberry Island, where our family owns property and where we summered every year growing up. This summer will be our sixteenth year, and while I’ve stepped back from being an instructor, the program is still going, and the 1850s building we renovated for it has been a constant source of inspiration. I spearheaded a lot of the physical improvements. The lighting fixtures I now sell via my lighting studio in Los Angeles were directly inspired by wanting to create lighting for that building—classic shop lamps.

“And then the pandemic happened, and it changed our whole orientation to what Maine was. We decided, if we’re going to be working remotely, why not be where we want to be? We came back to the island the summer of 2020 and started talking about fulfilling a longtime family desire: wouldn’t it be amazing to have a floating sauna?

“The straw that broke the camel’s back was when my sister found us a sauna stove that had been welded in 1979 and never used. We set out to salvage as many materials from the community as we possibly could— islands have a history of not really getting rid of stuff— and from the last week in June through Labor Day, we worked on nights and weekends, slowly building this structure that became the sea sauna. It was inspired by the old trap float houses you see scattered around the island. We made a simple timber frame of local spruce that had been cut and stored for years below my barn, and then sided the whole thing with cedar shingles. The shingle increments dictated the height of the door, the size and locations of windows, the pitch of the roof. Maybe it’s not the best physical insulation, but you’re talking about a 6- by 8-foot space with a giant stove. You can get that thing plenty hot.

“We suspended it on exactly half of this old 6-by-16 finger float, with the other half being a deck for landing the boat and sitting when you’re cooling down. I definitely had nightmares before the launch that the whole thing would sink. But I guess I had built enough boats by that point that I had some basic theories of hydrology and balance.

“We eventually got it launched in September and used it for a glorious month and a half that first summer before we came home to Los Angeles. But we went back last summer for almost three months, and now the sauna is part of our lives. Maine is a big call for me. It’s what I think about most of the time when I’m in Los Angeles. I don’t think about Los Angeles quite so much when I’m in Maine.”