A conversion in Falmouth trades on contemporary living concepts, but the rest is history 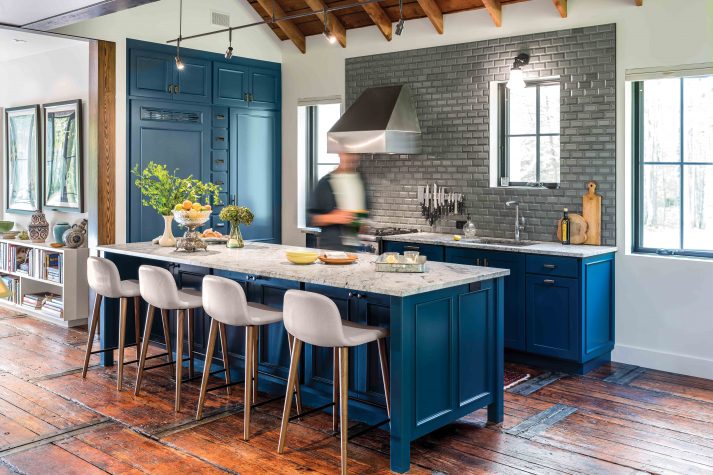 In the kitchen, Rainstorm blue paint on the island and Cyber Space on Jarrod Bernier Fine Cabinetry’s work, both from Sherwin-Williams. 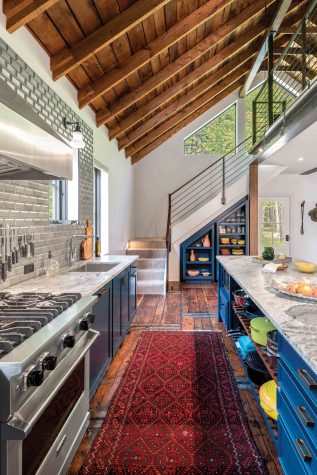 JennAir, Viking, and Bosch appliances line a wall covered in Japanese beveled subway tile. The millwork under the stairs opens to reveal extra storage. Counters are from Blue Rock of Maine, and fixtures are by California Faucets. 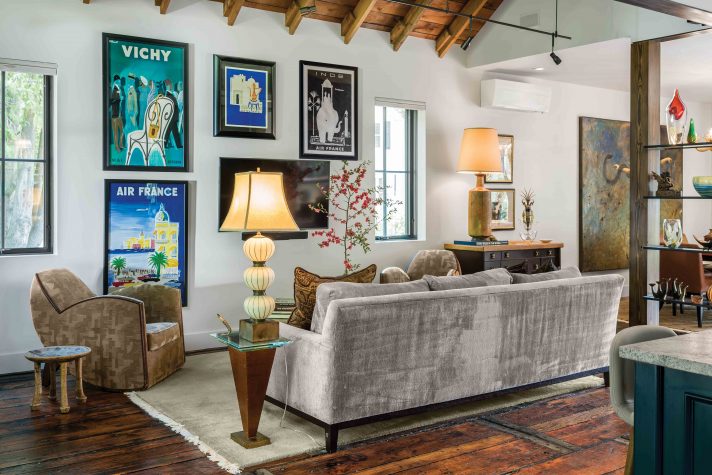 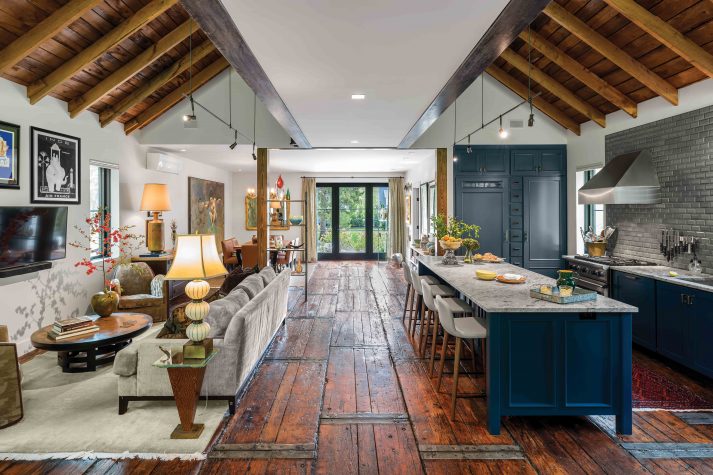 The floors, composed of about 80 Liberty-ship deck hatches of Douglas fir lashed together with brass straps, imparts a sense of history, as well as a tactility that is immediately palpable. Separating the living and dining room areas is a bronze and glass bookcase designed by the homeowner, Stephen Peck, and executed by Luke Winne and Rusted Puffin Metal Works. 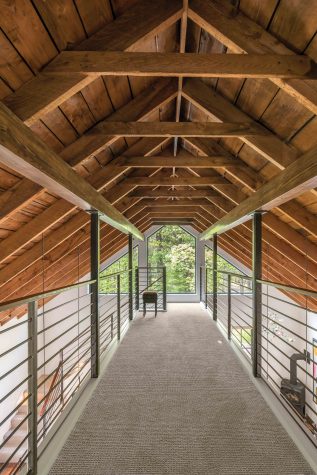 The original ceiling sits under a second roof. Briburn Architects designed the catwalk, here seen from the owners’ bedroom, which faces a lush view of trees and sky. 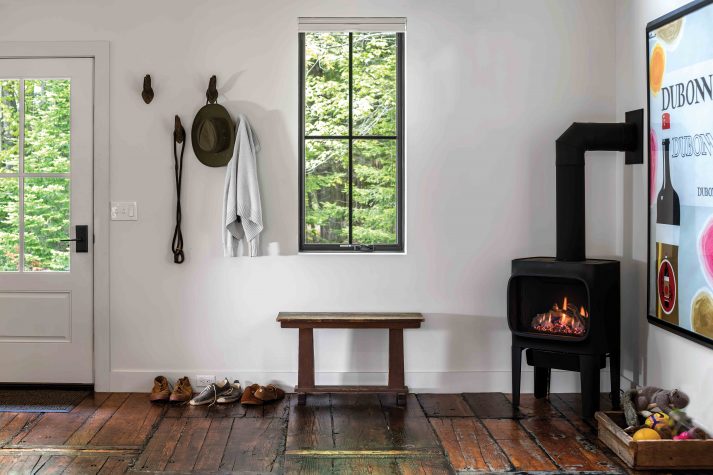 The “back” entry features a mudroom space, a Jøtul woodstove from Embers Stoves & Fireplaces and a box found on the property that is filled with toys for the resident golden Labrador, Luke. 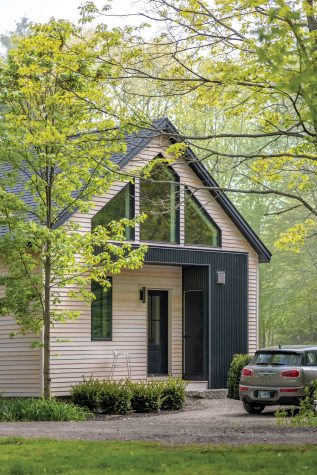 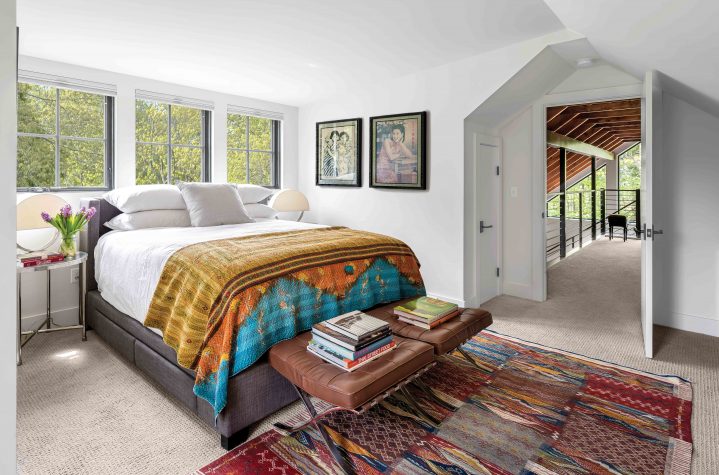 In the owners’ bedroom, a Moroccan rug and Indian coverlet bring color to the soothing white space. 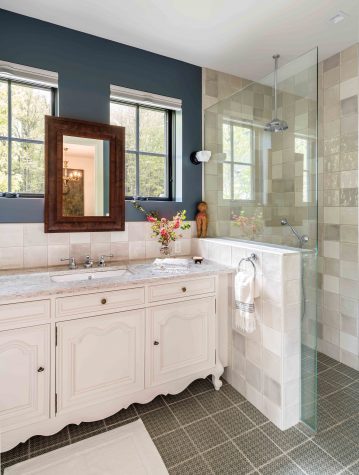 “We expect that the things we live with will always be here,” says Stephen Peck. “But they’re getting swept away. I believe in honoring the craftsmanship and history that was here.”

The “here” Peck refers to is an old barn-like workshop the designer converted into an open, airy one-bedroom Falmouth residence for himself and his husband, John Messer. In the spring of 2017, the couple was in the end stages of building a new home on Goose Pond in Lucerne, where they spend most of the warmer months (see our October 2019 issue). But during colder Maine seasons they were craving more activity and less seclusion. They decided to look around Portland for a place they could rent, but first they went up north and fell in love with a property composed of a circa-1900s Cape, a garage addition with an apartment, and a workshop they refer to as “the barn,” which had been erected in the 1970s. “I bought it almost sight unseen,” Peck says.

He returned to Goose Pond and began contemplating a total transformation. While interviewing architects for the Lucerne house, Peck had met Chris Briley, partner with Harry Hepburn in Portland-based firm Briburn. Though he’d eventually engaged another firm based nearer the lake house project, he had been impressed with Briburn’s “sensibility of being at the forefront of sustainability.”

Briley, initially thinking this would be another runaround, said no. “But then I went back in my files and remembered how much I’d liked Stephen and what he was trying to do up there.” So Briley drove out to Falmouth. “There’s that holy-cow moment when you go, ‘Wow, this needs a lot of help.’ We were going to take a building that had very little in the way of utilities and make it into a very energy-efficient home.”

Just how bad was it? “It was a wide-open space—no insulation anywhere,” recalls Reggie Lebel, president of Emerald Builders, who spearheaded the renovation and construction. “There was a workshop room at one end, a busy truss system from the original roof structure, and a catwalk that snaked through the trusses. We had to add everything.”

The structure’s most distinctive feature, however, was a floor the former owner had made from about 80 three-by-five-foot Liberty ship deck hatches. They were constructed of solid Douglas fir planks strapped together with steel bands riveted to the wood, each requiring two people to lift. “Liberty ships were part of the World War II effort,” explains John Deans, Emerald Builders’ marketing director and carpenter. “The first Liberty ships predated the U.S. involvement in the war. They supplied the British and were designed to be fast and cheap to build. They had to survive and not be blown out of the water by German U-boats.” Liberty ship construction, which employed some 30,000 people from 1941 to 1945, took place in South Portland and eventually yielded 30 cargo ships for England and 236 for the U.S. (One female shipyard employee—there were some 3,700 of them—was called “Wendy the Welder,” a take on Rosie the Riveter.) “After the war the ships were deconstructed,” continues Deans. “In the 1960s, deck hatches were just piled up in Portland.”

This sort of historic detail, of course, pushed all of Peck’s buttons. “These objects have traveled across oceans multiple times over many years, to Europe and Asia,” he marvels. “They’re each unique and weathered. A phrase I read recently describes them perfectly: beauty with a lack of intention. They were not meant to be beautiful or intended to be a floor. They were meant to service cargo shipped as war materials to supply troops. What started as hatches became a history and a story that makes them beautiful.”

First, however, was the problem of the foundation. “There were posts sitting on concrete piers and, in some cases, just concrete blocks,” says Briley. “The floor was rocking and rolling.” Copp and Sons hoisted the entire building, moved it 40 feet across the yard, and, once the new foundation had been set, moved it back.

“There was too much jazz and craziness going on with the old truss structure,” says Peck, who prefers more openness. The team remedied this by bringing in substantial structural beams. Steel I-beams and wood box beams running lengthwise hold up the far walls and also support a new catwalk that leads to the bedroom upstairs. Others are hidden in the walls. “We couldn’t disturb the patina of the hatch covers,” says Lebel, “so we had to wiggle 1,000-pound I-beams into the house and get them up without bumping or scratching anything.” Other challenges: lead paint found during reframing of doors and windows required roving containment areas and hazmat suits to remove, and it was difficult to accommodate extensive energy-efficient air-handling systems in a space that was so wide open. For the latter, they concealed ducts in insulation tucked between the old roof and the new asphalt shingles on top of it. They also brought it up through the walls and inside cabinetry.

The old workshop contained within the barn became the bathroom, and the loft above it became the bedroom. Briley suggested adding dormers to the latter to bring in more light from the south. Light from the west comes streaming through triangular gable glazing, which opens the top third of the west wall to views of treetops and sky. Getting to the bedroom might have been easier than it was decided to be. “We could have just dropped a stair by the room instead of having to walk across the house to go downstairs,” says Briley. But, Peck explains, “I wanted it to be an experience. The journey walking from the bedroom to the glazing and that view makes it feel like a bigger experience.”

The team made the building so airtight that, says Lebel proudly, it is 0.25 ACH, far exceeding the passive house standard (0.6) measuring air changes per hour. “I remember John texting me at one point and saying we turned a drafty old barn into a spaceship!” says Peck.

In the relocation from Miami to Maine three years prior, the couple had brought furniture and objects collected over their long relationship, many of them Art Deco and modern in style. The juxtaposition of these with the old rustic structure and its contemporary steel elements makes it atypical for Maine, to say the least. “Just because I’m in New England doesn’t mean the exteriors and interiors have to scream New England,” believes Peck, who again reiterates his appreciation of history and story: “These were things we’ve owned and loved and weren’t going to get rid of because they were going to be in a barn in Maine.” In the living room, the mix includes an Adriana Hoyos sofa upholstered in luxurious French fabric, Deco reproduction chairs, a 1950s Muller and Barringer coffee table for Kittinger, and Deco travel posters by Bernard Villemot (famous for interpreting the images of iconic brands such as Bally, Perrier, and Air France).

Though the conversion feels totally twenty-first century, the sensitivity to history, as well as the personal identification with furnishings and objects, evokes a deeper connection with the space than a resolutely contemporary approach would have yielded. “You just pause and take note of where you are,” observes Peck. “It makes you think of comfort food, tried-and-true relationships, things that mean something to you. That’s important, especially now, when our future seems so uncertain.” 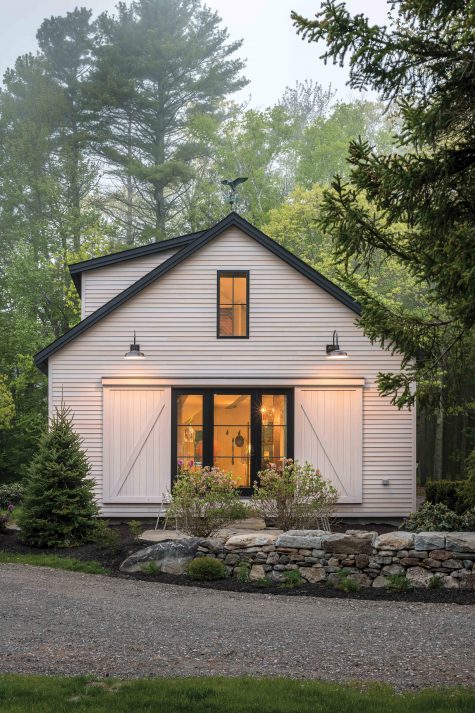 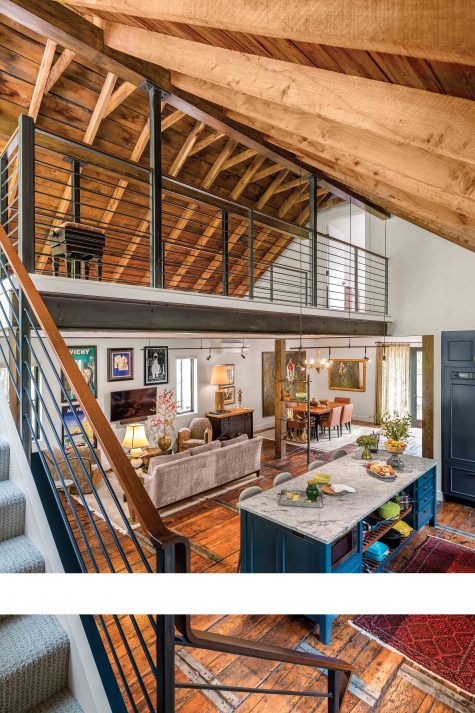 A view from the landing shows the four quadrants of the living space, over which is a catwalk sitting on steel I-beams that also provide structural support. 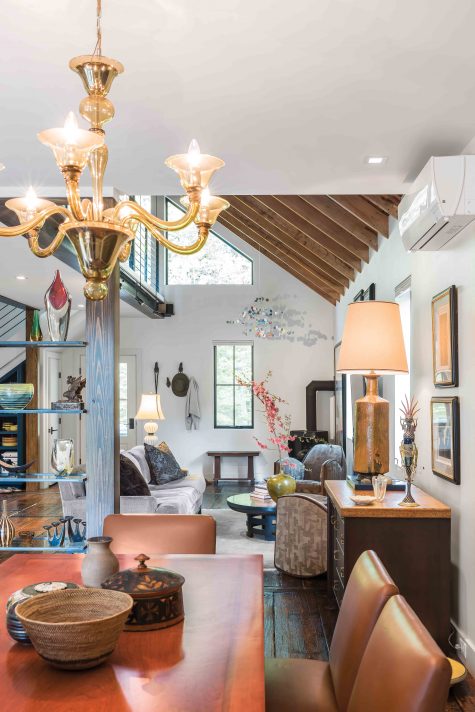 A Murano chandelier hangs over the dining room table; beyond it is a Paul Frankl chest of drawers.