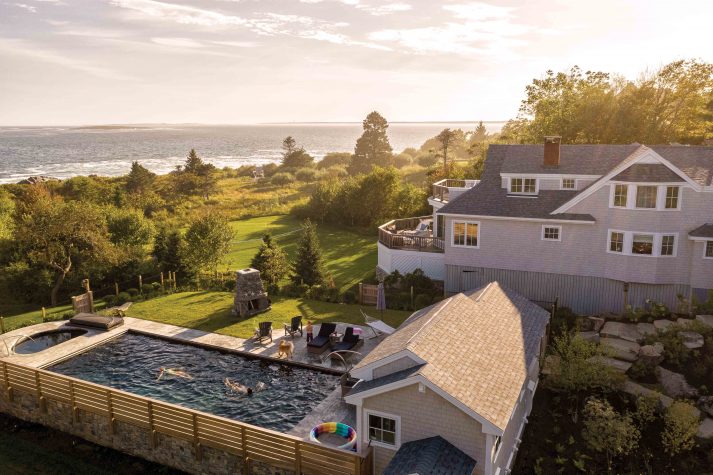 The owners first renovated the large house on the right, then bought the adjacent property to accommodate a cabana and pool. 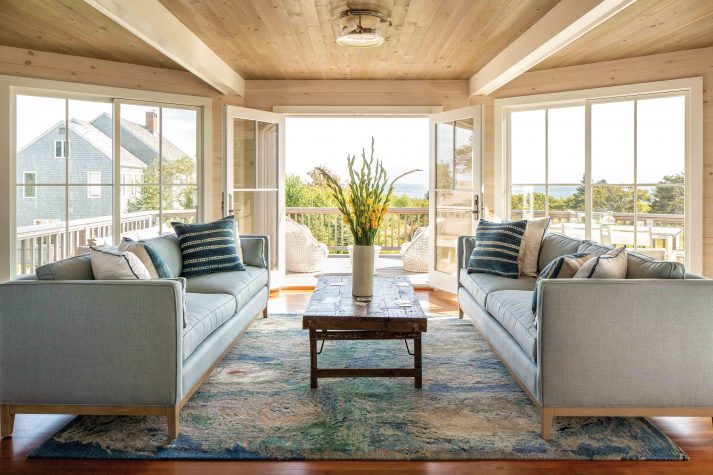 The part of the living room that was once an enclosed porch sports a palette of multiple blues but is not obviously nautical. The rug, says owner Kristin Valdmanis, looks to her like abstracted fish. 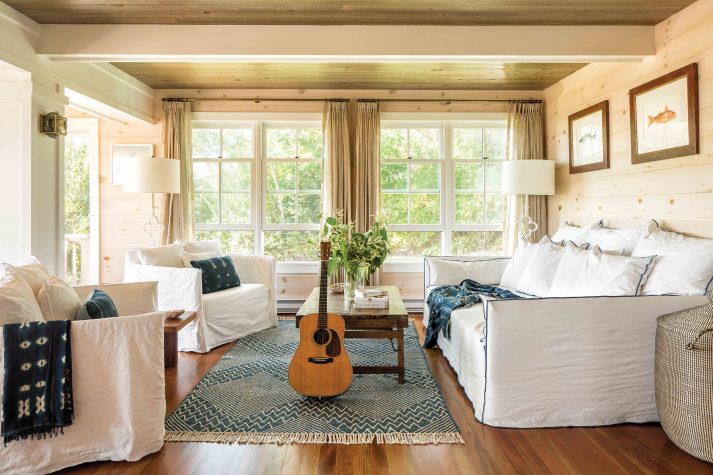 The original living room, now opened to the new, larger living room, features linen-covered Gervasoni sofas and armchairs on either side of a coffee table made from remnant wood planks. 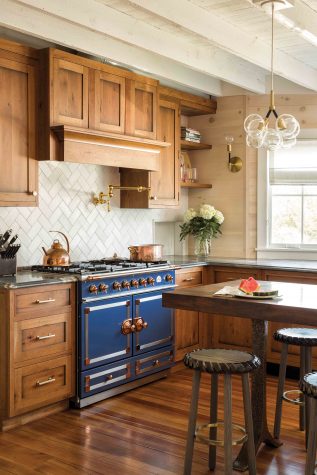 When Kristin purchased the kitchen’s La Cornue stove, she realized she was no longer thinking of this as a rental property. Atlantic Design Center designed the custom cabinets and specified the Calacatta Cielo marble countertops. 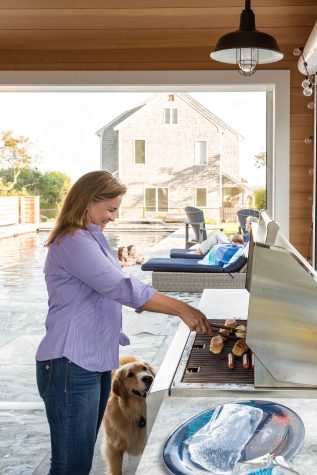 A Douglas fir cabana with terrazzo floors that was built on the neighboring lot—which the couple annexed to the original property in 2017—houses a grill for poolside snacking. 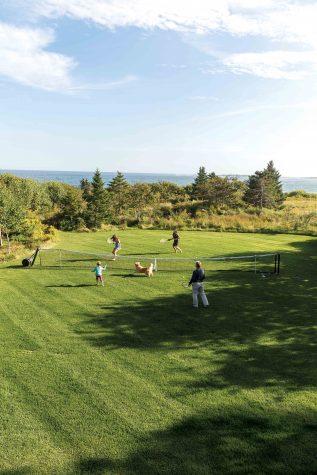 Mohr and Seredin Landscape Architects cleared overgrown bittersweet, honeysuckle, and other invasive species, replacing them with native trees and shrubs, in the process opening up views to the water and gaining space for this active family’s lawn sports. 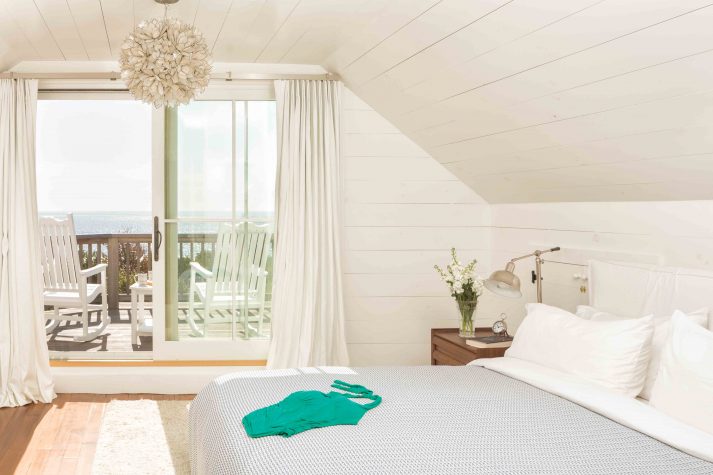 The owners’ bedroom opens onto a deck overlooking the ocean. Overhead is a capiz shell pendant. 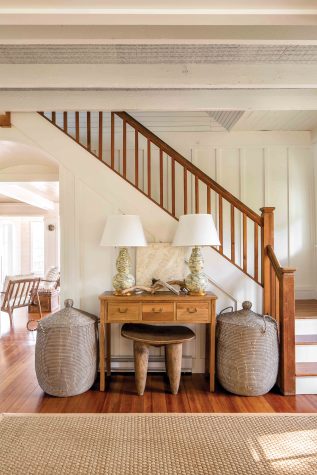 The design team opened up the original front entry and stairway to the dining room, which features Holland and Sherry wallpaper between the exposed floor joists overhead. 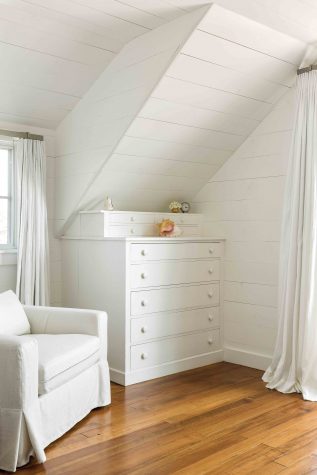 Built-in drawers opposite the owners’ bed. 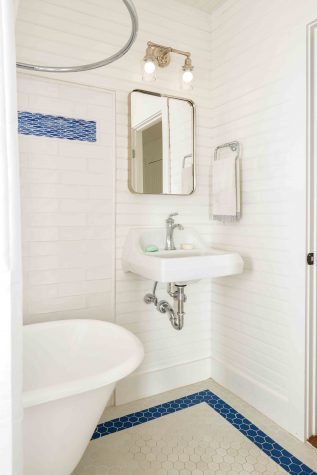 One of the upstairs baths with a claw-foot tub that was likely added in the 1920s. 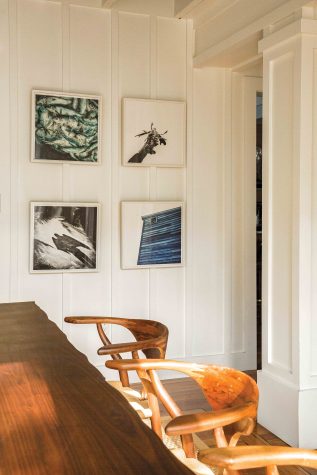 An eclectic photo array in the dining room.

Several years ago, when Warren and Kristin Valdmanis bought their first beach house in an exclusive community on the southern Maine coast, “We were advised to tear it down and start from scratch, which we did,” Kristin recalls. “We were young and didn’t see value in all the twists and turns of an old house. We had really young kids, and we needed something that was ultra-functional.” Fast-forward to 2016. Thinking of it as an investment property, the couple acquired another beach home, this one built in the 1890s, about 10 miles south in another exclusive enclave. “We had deep remorse that we had taken down an original structure with so many memories for the people who had lived there,” says Kristin. “We recognized this house had a soul, and didn’t want bad house karma, so we decided to preserve it as much as we could.”

The fortysomething couple had worked on several other residences with architect Walter Wilson and his daughter Crystal Wilson, who works for Douston Construction based out of Arundel. “My first impression was, ‘Oh my god,’” recalls Walter. “It looked like it hadn’t been lived in or repaired probably since the 1920s. On my first visit I didn’t even find the front door because it was so grown over. On the second visit I realized that what I had thought was a side door was actually the front.”

Despite the fact that it was largely open studs and floor joists, the five-bedroom house was structurally sound. But even though, as Walter says, “I have a tendency to keep things as they are, especially if the owner likes it,” he knew some things simply had to be changed. “They couldn’t keep it all,” he recalls. “The bathrooms, which all had claw-foot bathtubs, were tiny and looked like they’d been wedged into closets.” He and Crystal also felt the back staircase had to go. “Different people have different views of what charming is,” says Walter with a chuckle. “It was only 29 inches wide and very steep.” To this day, adds Crystal, “I won’t go near it.”

But the Valdmanises were adamant. “Life would have been easier if we’d gotten rid of that back staircase,” admits Kristin. “But it was so important to the history of the house—the whole front-of-the-house, back-of-the-house idea—that Warren put his foot down.” With their four children now older, they were less concerned about falls, and, she notes, “The kids use it all the time.” There was also a practical reason for preserving it. “To put a new stairway in by today’s codes would have required a larger space,” says Walter, who finally relented. “If it had been the only stair, it would have been a different story.”

On the main floor, the layout changed radically. The back stair was adjacent to the original kitchen and two staff rooms. That kitchen became a large mudroom, and the staff quarters a laundry room and a dual-use office/guestroom. The new kitchen occupies the old dining room, which is separated from the mudroom by a pantry (this was converted into a wet bar). “The pass-through window [in the pantry] is the only window we kept,” says Crystal, though they did move it to the opposite wall to service the new kitchen. “And the sink is original. But we added new wormy chestnut counters.”

Across the hall, they converted an old study into a new dining room and opened it to the front entry and main stair. Behind the door from the hallway into this new dining room, Crystal notes, they removed an old closet to find built-in drawers in the side wall. She also likes to point out the three widths of beadboard one encounters on ascending the stairs. It is precisely these quirky details that give the home its character, which is why, she says, “There is no drywall in the house.” They added nickel-gap paneling in some areas only to complement the beadboard. At the end of the hall on the ocean side were the original living room with fireplace and a porch that had been enclosed by previous owners. Walter and Crystal removed the French doors separating them, replacing them with posts. This preserved the original sense of the rooms as discrete spaces while also opening things up, and it respected the centrality of the fireplace in the original living room, which would otherwise have felt unmoored within the sprawl of the expanded great room.

To help decorate the interiors, the Valdmanises called Amanda Pratt. The three had met when all of them were living in Hong Kong, and Pratt had helped the couple with their Beacon Hill home after their return to the United States. “I have very traditional tastes and grew up in a family of collectors who passed down a lot of heirlooms,” says Kristin. “Amanda pushed me. She said, ‘You already have your formal house in Portland. You can do something more experimental and exciting out here.’”

“We did a lot of contemporary things not necessarily befitting the architecture but that read well,” observes Pratt. “It’s not so modern that it feels out of place.” These included linen-covered Gervasoni sofas in the great room, contemporary Italian dining chairs and an original Florence Knoll tall cabinet in the dining room, customized “Bubble” chandeliers from Pelle in various rooms, and tables made from old planks once fashioned into “wedding tables” as makeshift surfaces for serving food.

The Valdmanises have always been peripatetic, living at different times of their life in, among other locales, France, Japan, and Hong Kong. “They love to travel,” says Pratt. “So some of the less obvious choices in the house go back to favorite places. I tried to give them a home that replicates the experience of living in those places.” For instance, Japanese shibori and African bogolan textiles Kristin collected in their travels now cover toss pillows or function as throws. In the upstairs hallway, brass lotus pendants impart an East Asian feel.

While the house was being transformed, the land around it also had to be cleared. “It was a tangle of plant material, mostly honeysuckle and bittersweet, right up to the house,” remembers landscape architect Tanya Seredin, principal at Mohr and Seredin Landscape Architects. “But we had to be really careful because we were limited in what could be cleared in the shoreline zone.” This opened views to the ocean that had previously been accessible only from the second floor. Then, in 2017, the Valdmanises bought the house next door, where they put in a pool. Kristin says Seredin and co-principal Stephen Mohr “envisioned how to unite the landscape, treating it like a compound.” That meant designing a rock garden in the space between the properties and deploying native trees and shrubs throughout.

At one point in the renovation, the Valdmanises’ view of the property shifted dramatically. It came when Kristin bought a La Cornue range for the kitchen. That would be a major investment for a property intended for renting out during the summer. “I realized subconsciously that I was redoing the house for us, and we’d rent out the other beach house,” she says. Which is exactly what happened. It’s probably not a stretch to say that, in the end, what kept them here was all the good karma they created. 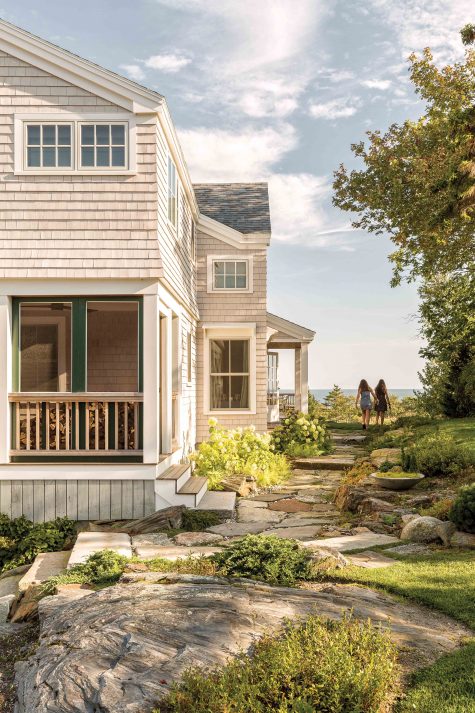 The front door is actually on the side of the cedar-shake-clad house. 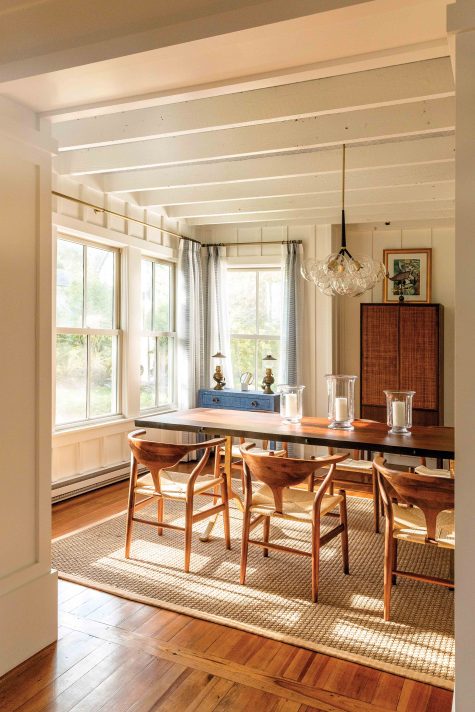 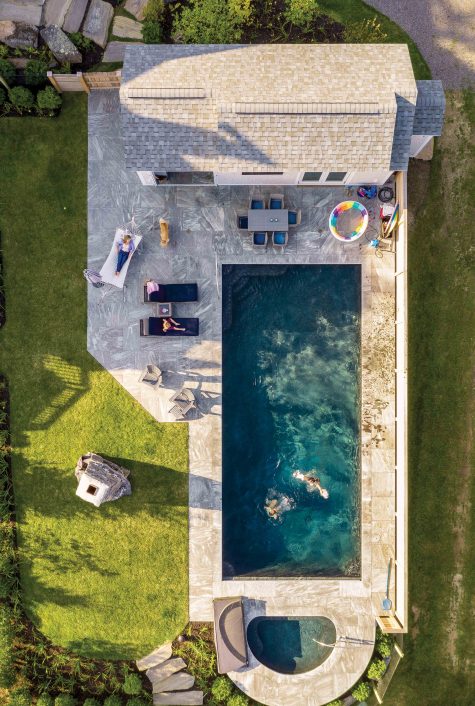 An aerial view of the new pool by Premier Pools and Spas and the cabana.