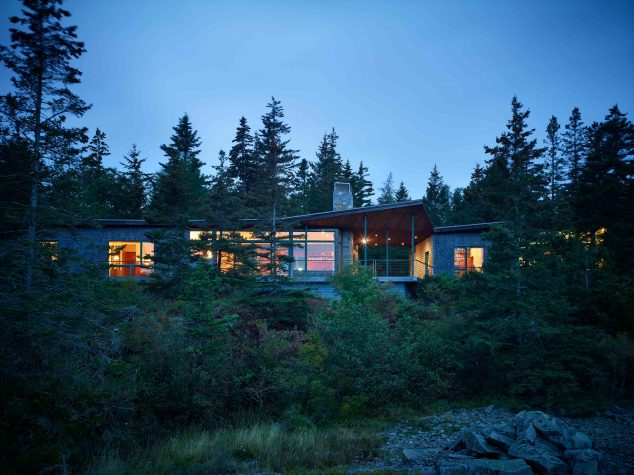 From the water, Edge House recedes into the landscape. Rose notes that they decided not to take down all the trees and instead embrace the forested nature of the plot. 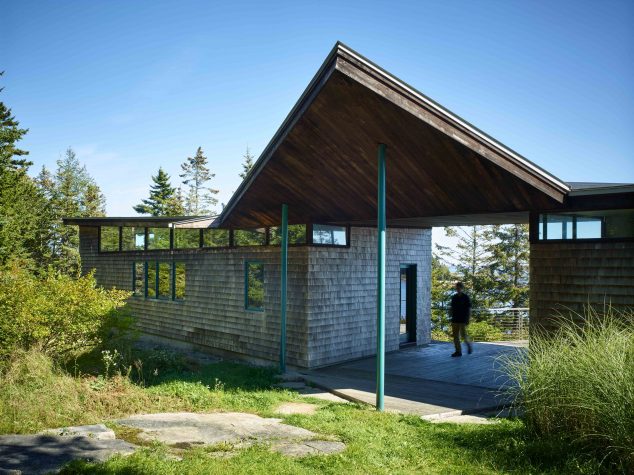 The landscaping was kept wild and natural. The goal of the project was to help the house “disappear” into nature. 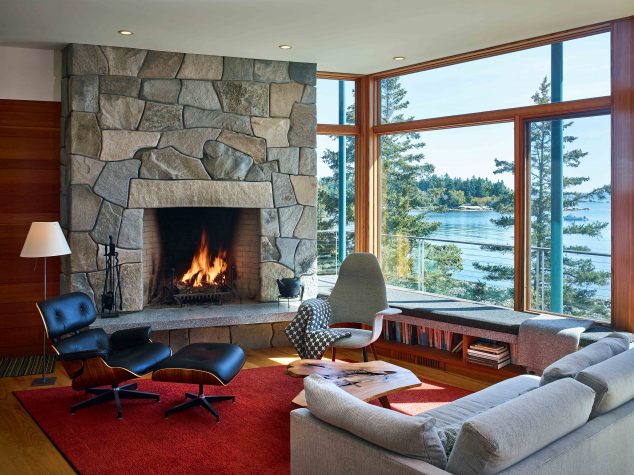 A midcoast mason worked to create this granite fireplace. Much of the house’s stone work was done using granite that was on-site when the project began. Midcentury modern furniture suits the streamlined nature of the long, low home. 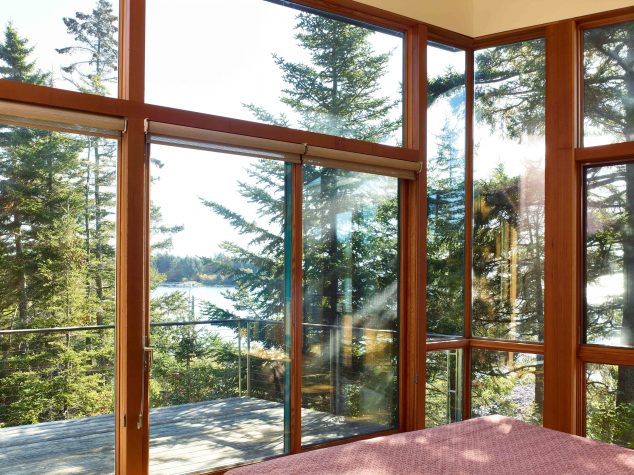 Rose used Maine-harvested and milled wood throughout the house, including this warm red vertical-grain fir. 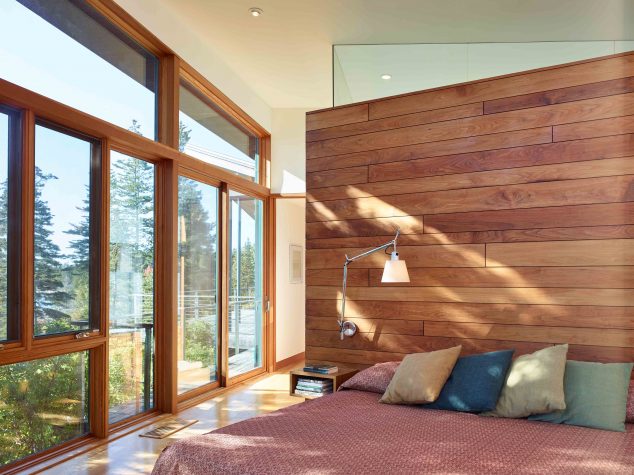 The layout of the house features two separate wings, joined by an atrium-like porch. The owners’ suite is on the more heavily forested end, while the guest room sits at the other end. 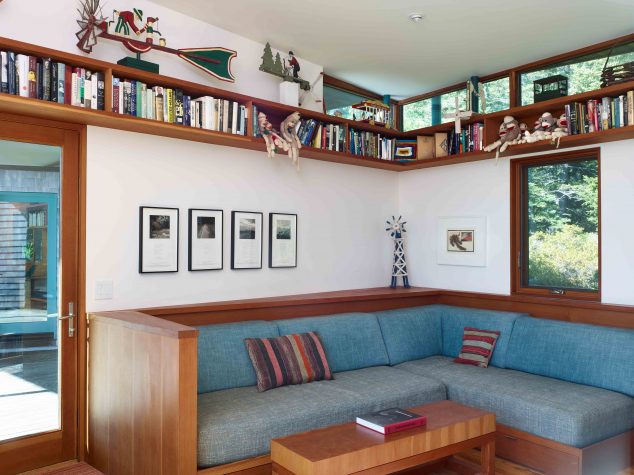 Built-in furniture made from fir helps bring the colors of the landscape inside. The transom windows add further light to the central living space. 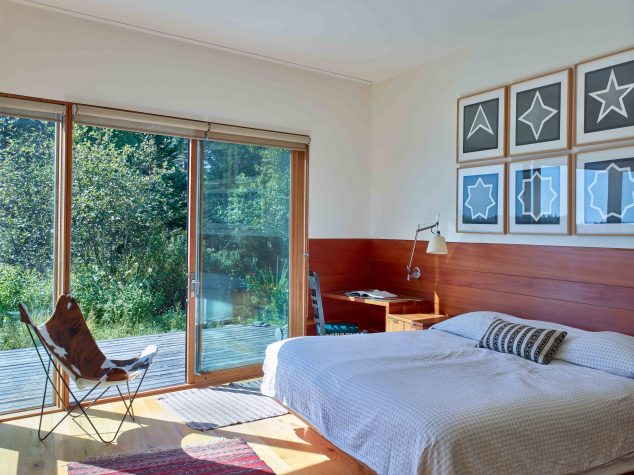 The owners have a substantial art collection, which fares best in indirect, filtered light—like the soft reflected light that comes through trees.

From above, the house looks like a piece of art. Its roof juts outward, angles sharp and bold. “It’s a sculptural thing,” says architect Charles Rose, who designed the home in 2017. He’s been fortunate enough to fly above his creation several times, and on each trip he finds himself struck anew at how the building sits in the landscape. In the midst of the evergreen woods, set back from the rocky shore, it runs north to south—the same direction as the surrounding “fingers of granite that extend into the ocean,” Rose says. “You see the grain of the landscape as Maine meets the ocean, these attenuating spits that go out into the water. The house runs with it; it looks quite crystalline.”

Known as the Edge House, this contemporary structure was created for two very private clients. They wanted a single-level house with southern-facing views of the ocean and gracious windows, but they also wanted a cabin that wouldn’t draw the attention of curious passersby. “It was important to them that, when you looked from the water, you could barely see it or notice it,” says Rose. “This house offers a profound psychological escape from the city,” says one of the homeowners, who in their earliest briefs stressed both their desire to “commune with nature” and their desire for complete privacy. If you happen to be sailing by the Edge House, you might see some aqua-painted blue steel columns (the only bright color used in the exterior of the home). You might see the windows or the cedar shingles. You could spot it if you know where to look, but you could just as easily glide right by.

If you approach from the opposite direction, from the driveway, you’re also likely to be tricked into ignoring the architectural design and focusing your attention on the water and the evergreens instead. From the front, you can look straight through the home down to the mercurial waters of the Atlantic, thanks to an open walkway that connects the two wings of the 2,250-square-foot private residence. “We also wanted to create a complete separation of the owners’ bedroom and study from the rest of the house for acoustical reasons,” explains a homeowner. “This led to the covered entry porch with its powerful view of the water.” The divided layout also creates a sense of openness before you even enter the structure—a sense that, no matter where you go inside, you’ll be drawn back out. It’s an interesting use of negative space. Rose created a house that is more about its openings than its enclosures. You’re not supposed to pay attention to the shingles, to the masonry. You’re supposed to pay attention to the windows, the porches, the decks, the very air that surrounds the Edge House and the nearby ocean’s ledge. “We wanted it to feel like a clearing in the woods,” Rose says.

“It doesn’t look complicated,” says the builder, who is being kept anonymous to protect the homeowners’ privacy. The builder has been working in this area for years, and he knows the waterfront well. “We work in a lot of beautiful places,” he says, “but for some reason this lot was special. It was always show-ing you something else with the view. The sea would go from stormy to calm. The sky would go from gray to blue to pink.” The house was never going to compete with this slice of Maine coast, so instead the builder set out to create a clean frame to highlight all that natural beauty. “For this kind of contemporary work to be not just acceptable but to excel requires a level of obsession and diligence that many normally fine carpenters can’t muster,” says the builder. “If one thing doesn’t fit, you notice.”

The builder credits himself for knowing what he could do himself as the lead carpen-ter and what he had to outsource. “I’m smart enough to know my skills,” he says. While he did much of the “finicky, fine work,” he also brought in a framing subcontractor to help put together “all those weird angles” and another subcontractor to work with the “big metal bits.” Perhaps the heaviest workload fell to the mason, Sandy Benne, who used granite blocks from the site to construct a fireplace and sections of an exterior wall. “The stone is curious,” says the builder. “The house is located near sites of several old quarries, so there was all this old granite down on the shore that had been there for almost 100 years.” These cut stones had been slowly washed by the ocean, smoothed and rounded. They were made by natural processes, cut by man, softened by erosion, and then, with the construction of Edge House, molded by man once again. In order to make each stone fit with the next, Benne had to spend hours on each piece, shaping and molding, sanding it to the right dimensions. Like the rest of the project, Benne’s work had to strike a delicate balance between rough and smooth, rustic and elegant. “We were lucky to have a mason who could truly craft things,” says Rose appreciatively. “I have to say, he really did a beautiful job.”

The emphasis on natural materials continues on the interior of the shelter as well. Behind the minimalist windows (no trim, painted turquoise to match the metal columns), you’ll find spacious rooms paneled in vertical-grain Douglas fir boards, which gleam vaguely red in the reflected southern light. “They were treated with a special oil stain to try and keep it looking very natural,” Rose explains. The floor is low-grade oak, chosen not entirely for its budgetary friendliness (though Rose admits that was a consideration in all the decisions they made). Just as important, “it gave the homeowners the effect they wanted,” says the builder. “The boards have all these interesting disfigurements and cracks.” The kitchen countertop was made from a single solid piece of locally quarried rock, sourced from Freshwater Stone in Orland. “It’s a beautiful item,” says the builder, who enjoyed working with so many iconic Maine materials. “We wanted to keep things very local,” says Rose. “The goal was to have a house with a modest price tag, a rustic feel, but also a very contemporary design.”

“Our office is very technology-forward,” he adds. This came in handy particularly when they were trying to figure out the orientation of Edge House and the placement of the windows. One homeowner explains that they wanted to make sure there was “always a place to sit on the deck in the shade, and always a place to sit in the sun.” They made this request early in the process, having fallen in love with the “breathtaking” views afforded by the site. This approach jibed with Rose’s ethos. “We’re trying to create environments that are very luminous,” he says. “These clients have a lot of art, particularly contemporary art, and it was important to get the right light to view that.” While many museums use cool northern light (or LED lights) to illuminate their pieces, Rose took advantage of both the wooded plot and the nearby salt water. “We were able to put into our programs the house’s longitude and latitude, and that it was forested. With this program, we could predict what the level of light would look like at any time of day or year.” He designed the long, lean house so that every room would have access to water views and be washed with soft “filtered, reflected light.”

“The light coming off the ocean is spectacular,” Rose says. “The house is really built right on the rock, right on the site. It’s integrated into the land.” Or, as the builder puts it, “That house looks like it belongs on that site. In some ways,” he says, “it was designed by the site.” 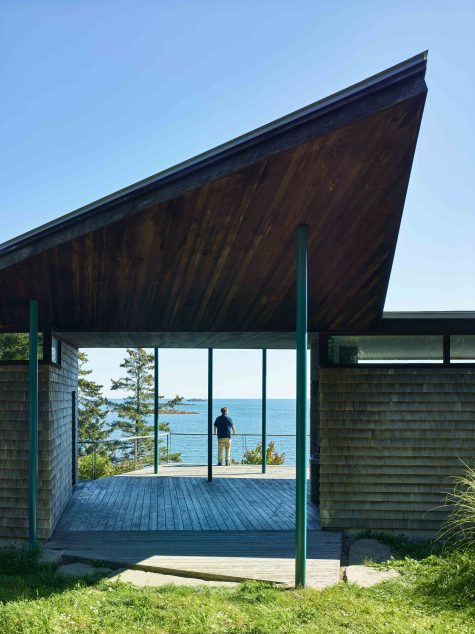 Visitors to Edge House don’t have to wait for views of the water. Massachusetts-based architect Charles Rose designed this contemporary oasis for private clients who wanted to embrace the natural landscape and highlight the ocean scenery. 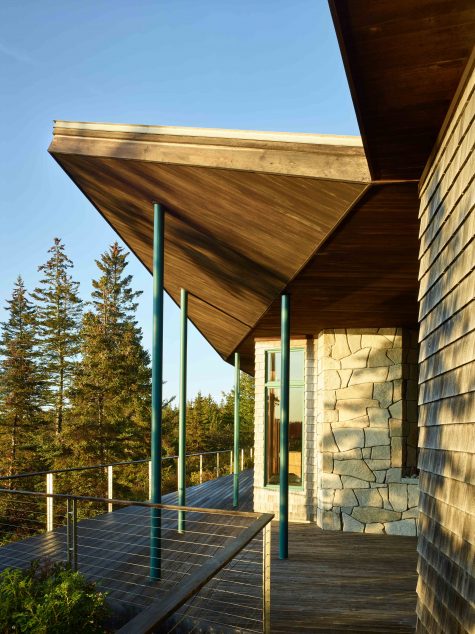 For a jolt of color, Rose treated the steel supports with a turquoise finish.