Lured by water and wildlife, a couple renovate a 1920s cottage poised between marsh and ocean 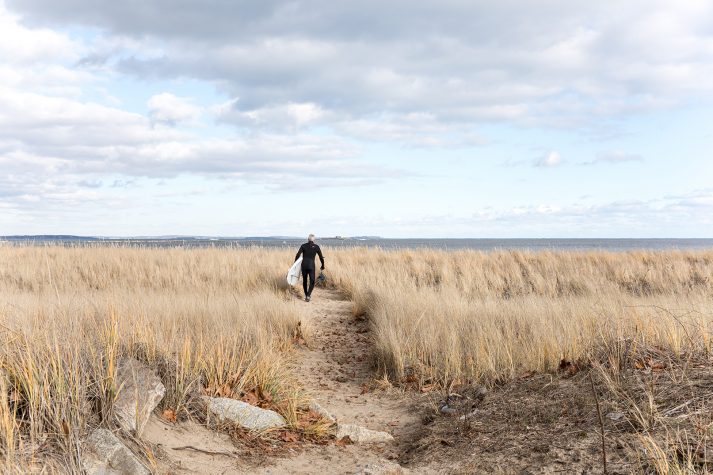 Eric Junker heads out to Hills Beach with his paddleboard. 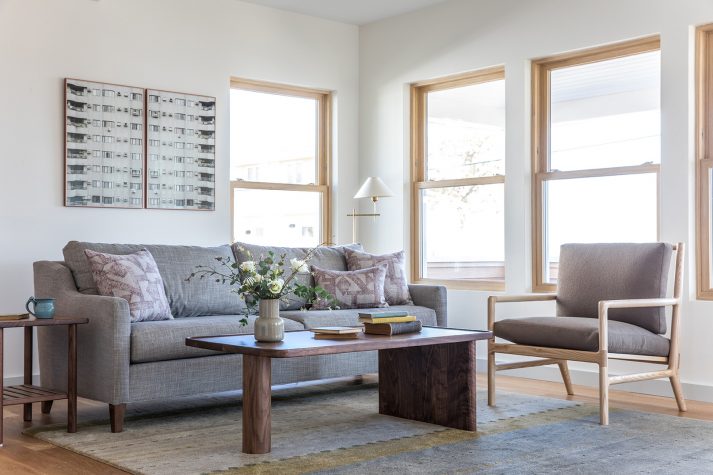 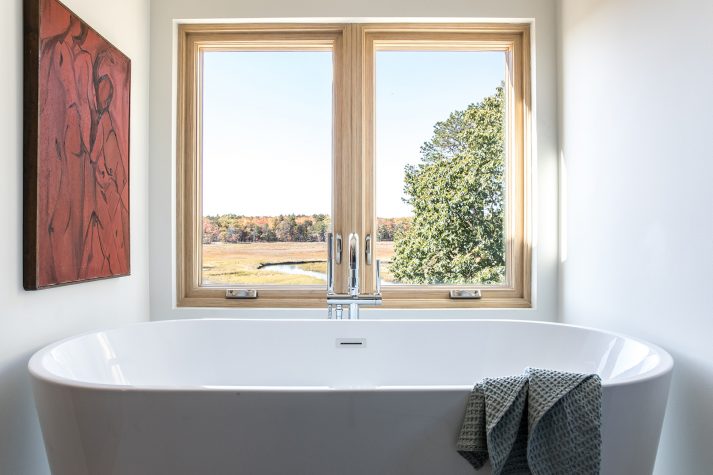 In the owners’ bathroom, the Kohler tub with Moen fixtures overlooks the marshes of the Rachel Carson National Wildlife Refuge. 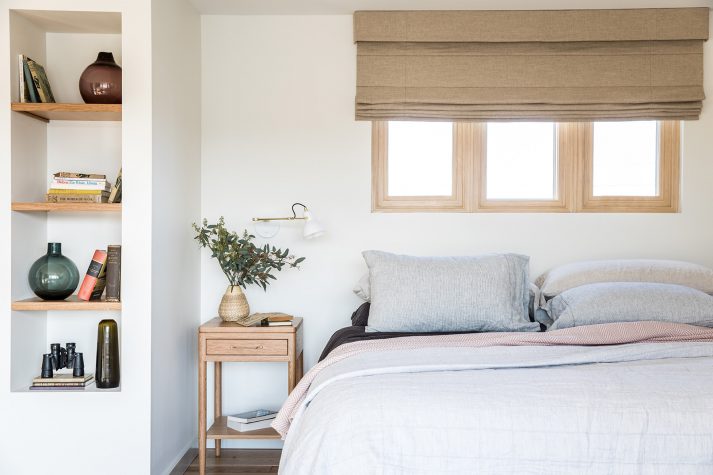 In the owners’ bedroom built-in shelving is reminiscent of Moroccan Tadelakt plasterwork. The Baxter nightstand is by Kidwell. 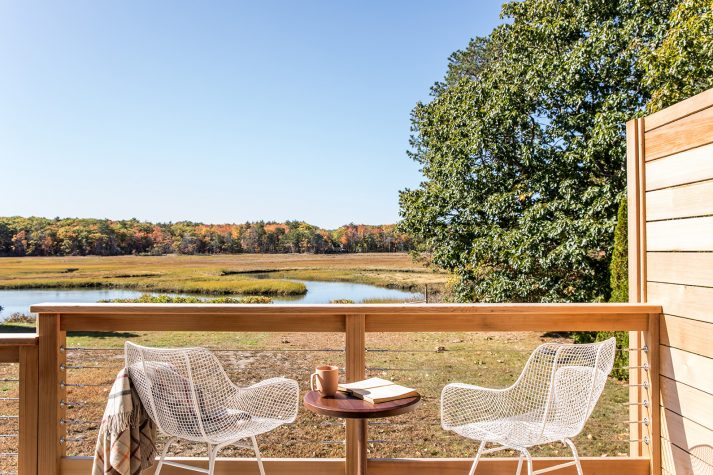 A pair of Sculptura chairs from Design Within Reach offer a perfect perch for birdwatching in the marsh.

We’re both pretty down-to-earth outdoors people,” says Denyse Wise of herself and her fiancé, Eric Junker. “Being around nature is important to us.” “I’m a big water guy,” agrees Junker. “I paddle board every day.”

Junker’s great-grandparents first bought property in Maine in the 1920s, and though he grew up in Massachusetts, he spent almost every summer of his life at Goose Rocks Beach in Kennebunkport. So when the couple found a cottage from that nostalgic era that was perched between Biddeford’s Hills Beach and a marsh near the Rachel Carson National Wildlife Refuge—where eagles hunt and gulls, egrets, and cormorants flock—they bought it on the spot.

“I can watch the Red Sox and the egrets fishing at the same time,” notes Junker, a retired shipping executive. For Wise, whose job with a healthcare services company can be busy and stressful, “the fact that I can catch a 20-minute sunrise or sunset at the end of the day is rejuvenating,” she says. “It offers me daily restoration.”

Their vantage point on nature’s spectacle, however—the cottage itself—was less than ideal. The couple lived in its “as-is” state for a few years before Junker called a family friend to help conceptualize a renovation. Walter Fuller of Cubic Architects in Massachusetts visited and took in the previous owners’ alterations done in the decade prior. “It looked like a chaotic, do-it-yourself nonsensical renovation,” he remembers. “The stairs were unsafe; very steep and narrow, with no railing, so they wouldn’t meet any kind of code.” The second floor, half the size of the first, felt cramped. There were also myriad posts on the first floor that broke up space and views and would have to be removed. “It was a quest to give Denyse and Eric an open plan,” he says.

Designer Tyler Karu, who the owners met through a mutual friend and who also has childhood ties to Goose Rocks Beach, enumerates other infelicities: “The old beadboard was stained, painted, or cracked, and the windows were old and drafty.” Finally, adds builder David Szeredy, “The house was all crooked and built as a cottage, not a year-round residence. It was a challenge leveling everything out.” Tearing it down and starting from scratch, however, was out of the question because zoning and building restrictions would demand an even smaller new house (this one’s around only 1,800 square feet) hoisted on stilts, and the basement would have to be sacrificed.

To remove the ground-floor posts, explains Szeredy, “We had to go to a specially designed steel beam that would support the second floor.” He then clad it in wood. The couple also wanted a large kitchen island topped with a weighty quartzite slab measuring seven feet by over six feet. So, Szeredy says, “We had to put in new floor joists to shore up the kitchen.”

In the initial design meetings, Karu says, she realized her clients “were passionate about the neighborhood and maintaining a small, intimate house that feels like them and is appropriate to the area. They wanted something that felt very clean, unembellished, and with a relation to its surroundings.” Junker and Wise were also on a budget, but, says Karu, “because they were approaching the project with such a thoughtful philosophy, that wasn’t a problem.” They would simply balance basic unpretentious items with very occasional splurges on materials and custom furnishings.

Take Karu’s decision to opt for simple wood windows. “We asked ourselves, ‘What do we remove that is unnecessary?’” she recalls. “These more freely connected the house to the outside because they didn’t have a lot of trim and detail for the eye to get through to see the nature beyond them.” She also kept the architectural palette minimalist and cohesive, specifying, for instance, white oak for all floors, paneling, and most furniture.

“I didn’t want competing tones,” she says. “Having it all be on the same tonal level allows the space to read as more balanced and seamless.” The application of wood also served another important function, points out Wise. “We have water all around us,” she notes, “so I really appreciate the wood elements because they ground you.”

Many of those elements were the handiwork of Portland woodworker Kyle Kidwell, whose furniture designs had appeared on Wise’s radar. “We started by thinking we’d get some chairs,” she recalls. “But once we started, we couldn’t stop. We have about ten pieces of Kyle’s furniture, and he also did all the paneling. Those pieces just naturally shine.”

Indeed, Kidwell’s furniture has an exquisitely crafted, yet simple, functional integrity, much like handmade Shaker furniture. But he channels this quality through a more modern lens. Some pieces are his designs (the dining chairs, the living room coffee table), while others were collaborations with Karu (the barstools and midcentury-like armchairs in the living room). The coffee table and the barstool backrests, incidentally, are made of walnut and thus are the only two variations in the otherwise all-oak palette.

Stone and tile choices are subtle references to the natural setting. Karu selected the kitchen island’s quartzite and the Jet Mist black stone used in the owners’ shower (for a bench) and for the sink backsplash for their veining. On both, it resembles the movement of coastal sands. “To me,” observes Karu, “the blue-green shower tile resonated with the tumbled sea glass I used to pick up on the beach during summers in Kennebunkport.”

Likewise, the handmade cerulean tiles of the kitchen stove’s backsplash, believes Wise, “are perfectly imperfect and they bring the water into the house.” Yet they don’t scream “nautical,” which was perfectly in line with the minimalist sensibilities of the clients. The paneling surrounding the kitchen, too, has a nautical connection: it is reminiscent of relaxed, no-nonsense beach shacks, albeit far more finished and refined.

Contemporary art also sidesteps the coastal home’s cliché seascapes, and lighting offers just the right amount of dressiness. A large Isamu Noguchi lantern over the dining area is classic (“my favorite piece of lighting in all of interior design,” enthuses Karu), and Aerin’s “Franca” pivoting light fixture “has a four-cornered quality that emphasizes the island’s square shape.” It also picks up the brass of the faucets and the cabinetry’s drawer pulls.

“We really wanted our home to be an oasis, a sanctuary,” says Wise of the place they now call their full-time residence. And it is. So much so, Wise adds, that “I stayed at the Ritz in Philadelphia the other night and I have to say I was underwhelmed. I kept thinking how I like my house better.” Clearly, comfort, livability, and being surrounded by a stunning year-round marine environment are luxuries Wise and Junker prize above all others. 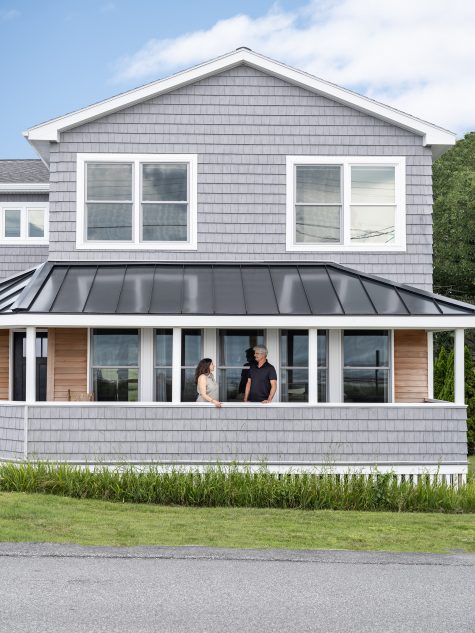 Junker and his fiancé, Denyse Wise on the front porch of their Biddeford home. 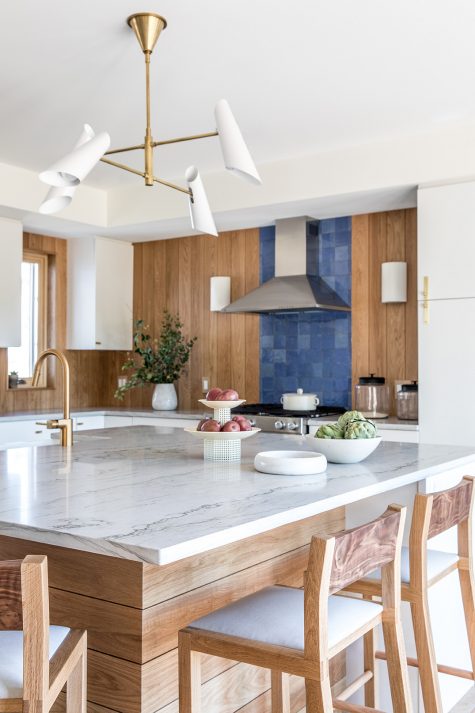 Aerin’s Franca chandelier illuminates the large kitchen island, which is topped with quartzite from Stone Age Design in Biddeford. The backsplash is made with Clé tile’s handmade cerulean-toned zellige. The barstools are Kidwell’s. 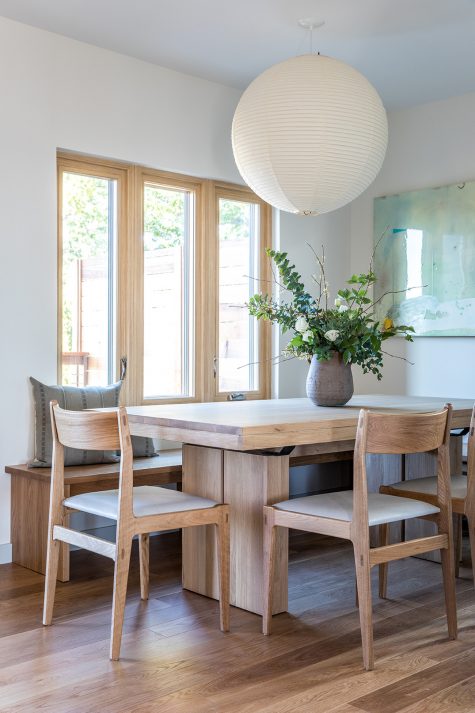 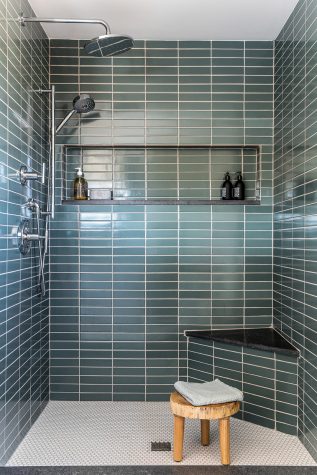 In the shower, Karu stacked Fireclay’s bluegreen tiles, which reminded her of seaglass she used to pick up on the beach. Jet Mist granite outlines the inset and tops the built-in bench. 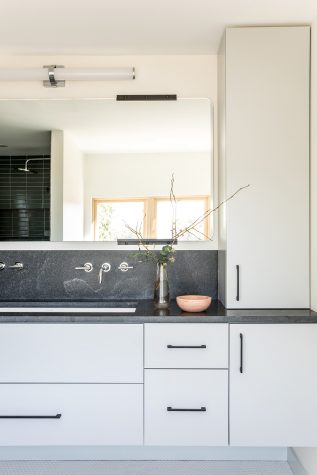 The counters and backsplash of the owners’ bathroom vanity repeats the Jet Mist black granite of the shower. 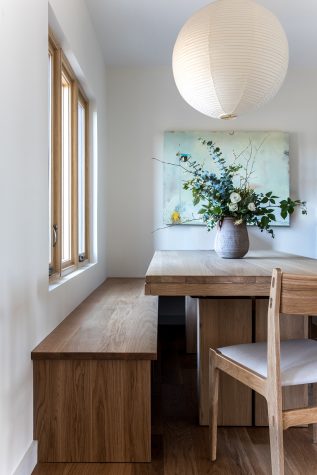