A family reunites at the Rangeley camp of their youth, creating a unique kind of family compound 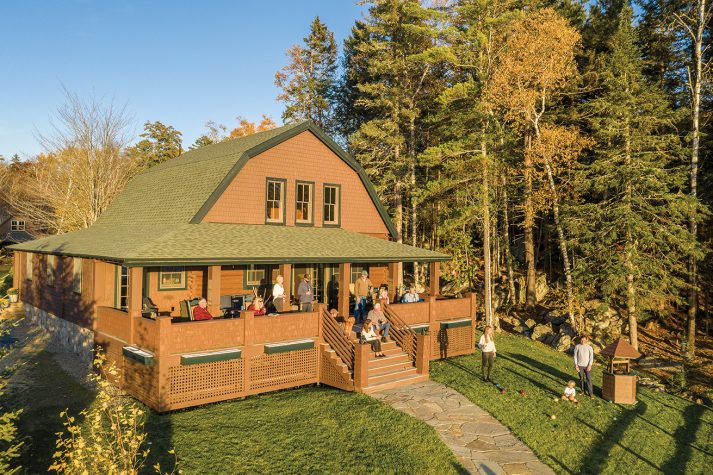 The Higgins clan on the porch of the restored 1908 house. 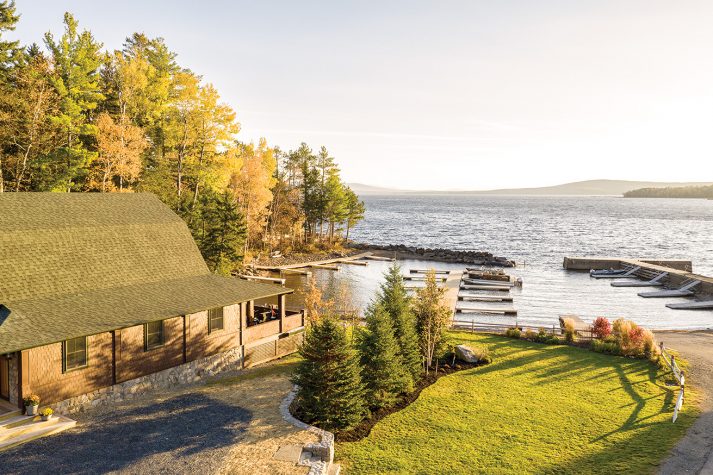 Rangeley Building and Remodeling rebuilt a porch on the side of the house that had been ripped off, then enclosed it in a subsequent renovation. 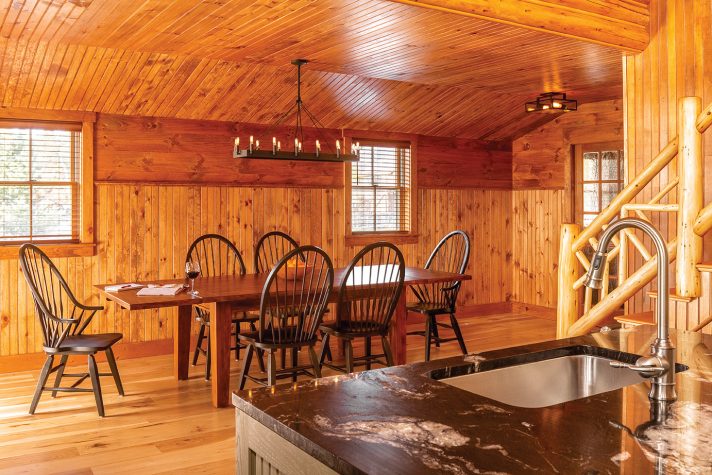 The house features plenty of spots for the extended family to gather. 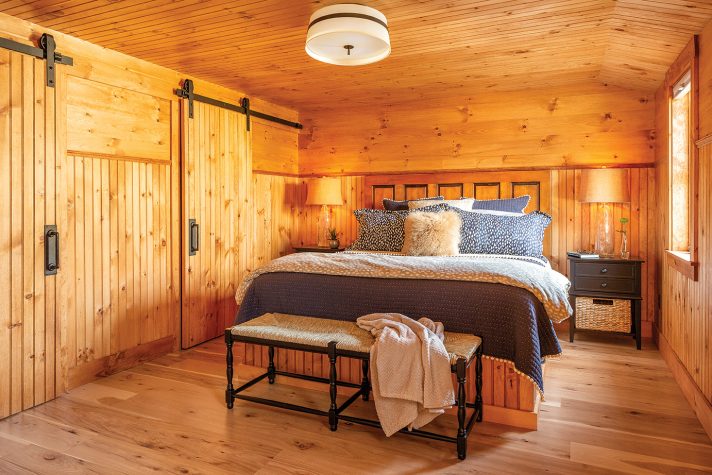 Carlisle wide-plank floors run throughout, including in the owners’ bedroom, which features space-saving sliding barn doors. 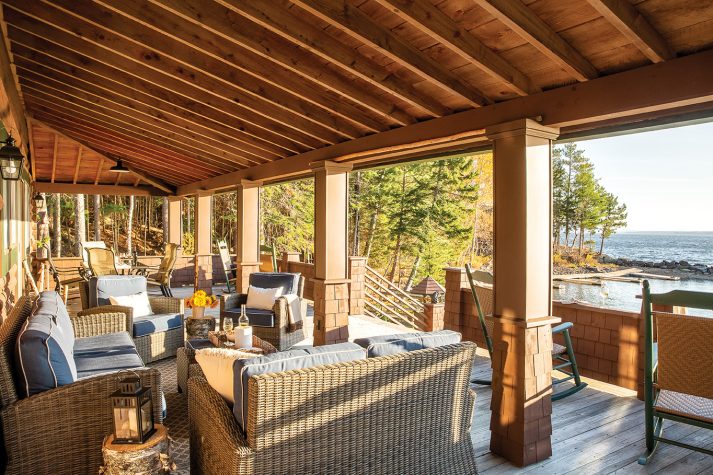 Lots of furniture on the porch accommodates the Higgins brothers’ families in summer.

One day in 1993, Dan Higgins got a call from his brother Jim. “Guess where I am?” asked Jim, his voice barely suppressing his excitement. “It looks just like it did when we were kids!” At that moment, Jim was standing on the banks of Mooselookmeguntic Lake at the Ridlon Camp in Rangeley. The place had made a huge impression on the Higgins boys (there are four), who summered there in the 1960s. Jim had been in the area on business and decided on a whim to see if it still existed.

It did, of course, though his perception that Ridlon Camp looked exactly as it once did was perhaps colored by his fond memories of life there as a boy. In reality, the big main house, built in 1908 by Frank Ridlon, had over the years been “Frankensteined,” to use Dan’s wife Debbie’s term.

A porch and chimneys had been removed, and the logs of the cabin were covered in soot and grime. Still, gripped by nostalgia, the three brothers’ families began renting cabins at Ridlon again in 1994, staying initially for two weeks at a time, then three, then four.

It all seemed wonderful until Debbie realized it was too stressful to manage five young children in this beautiful but semi-wild place. So the Higginses took a hiatus until 2006, when they bought one of the smaller cabins. “When we came back, it was the most wonderful, fun time,” Debbie recalls. “What a turnaround when the kids got older!” But she set her sights on the larger main cabin, telling the owner that if he ever wanted to sell, they’d be interested buyers. “I asked him for the next six years,” she laughs. One day he approached her at the grocery store and said he was ready to sell. The Higginses struck a deal, and it was theirs.

“The overarching premise was to go back to the way we remembered it, bring back that history and charm, but make it functional.” —Dan Higgins

“The overarching premise,” explains Dan, “was to go back to the way we remembered it, bring back that history and charm, but make it functional.” They did nothing for a few years but knew some things would have to change. For example, the entryway deposited the family right at the steps to the upstairs bedrooms, so this is where they dumped their gear and caused congestion. The logs would have to be blasted with soda to remove the dark buildup, and the layout was awkward. They also wanted to restore the porch that had been ripped off and hoped to add on a bedroom/bathroom suite for Dan and Debbie in the back.

In the first alterations, undertaken in 2013 by Rangeley Building and Remodeling, they moved the kitchen to the entry side. “I said no dishwasher because I thought the family would gather to do the dishes, and it would be a bonding experience,” says Debbie. “Never happened.” A second renovation restored the porch.

But the latest renovation is taking the cabin to another level. The Higginses had raised their children in Milton, Massachusetts, and Boston. Four are now married, and there are three grandchildren, with two more on the way. The city is changing and, jokes Debbie, “They hipstered us right outta there.” Dan’s work in the healthcare business could be done remotely, so they decided they wanted to relocate permanently to the camp.

Rangeley Building started by hiring jackers in 2019 to lift the structure so they could dig a new foundation. Once the home was back in place, company designer Jill Crosby appended the longed-for additional suite, expanding the square footage to about 2,700. She also changed the entryway, extending the porch to create a mudroom, then enclosed the whole thing to allow for a year-round dining space next to the kitchen.

Carpenter and production manager Brian Dube knocked out two walls that were beginning to sag and bow. “We took the old logs and milled them into two rounded pieces,” he says, “then we inserted LVL and sided it with the milled logs.” The engineered wood provided structural strength, but outwardly the log appearance remained unaltered. Crosby redesigned the stair, removing a landing and turn to create a straight shot up to two bedrooms, which remain largely the same as they were in 1908 except for the new Jack-and-Jill bath between them.

Dube revamped the rustic stair railing, which was crumbling into dust. “For cleaning purposes, Debbie didn’t want that,” he says, “so we rebuilt it with new cedar posts and branches. But we saved the handrails,” scraping them of any lingering bark and sanding them smooth.

Crosby maximized the new basement with a 1,300-bottle wine cellar, laundry, a family room, gym, utility room, guest suite, and Dan’s office. Still in progress is a craft room for Debbie. But the biggest challenge proved to be the new kitchen renovation. “It was completely redesigned,” says Crosby. They kept the marble-topped island, though it required steel beams underneath to support the weight. (Incidentally, there are now not one, but two, dishwashers.) Debbie wanted to continue the stone on the countertops, and that raised an issue.

“They’d redone the kitchen almost ten years before, and we couldn’t find more of the stone,” says Crosby. The quarry had been depleted of that particular vein, and what was coming out of it now was a darker coffee color that wouldn’t match. “When I say I looked high and low, I mean I looked high and low. I finally found one slab in New Haven on the internet. We went to see it, and it was perfect.”

Dube’s most intense ordeal, however, was the kitchen backsplash. Debbie desired a clean vertical surface set into the wall. Of course, that wall was made of convex logs, which Dube had to somehow level and smooth out. “I scored it with a skill saw and then chiseled out small pieces to make a flat surface,” he recalls. “I think I had to retire that saw after that.” Crosby only half-jokingly recalls making herself scarce during that process.

The team annexed a bath off the living room to create a wet bar that they swathed in stone veneer. Under the high pitch of the original cedar shake ceiling, they needed a beam strong enough from which to suspend a fan and lighting for the kitchen and living room. It looked like a telephone pole, and Debbie fretted it would be too massive. “I told her the ceiling was so high that once we got it up there, she wouldn’t even notice it.” Of course, this turned out to be true; it looks perfectly proportional to the vaulted space.

Crosby reused all the furniture the family had, which conformed to the rustic log cabin ambience of the home. The couple also bought taxidermy hunting trophies in keeping with this aesthetic. A 1940s moose head filled with plaster of Paris was acquired from a museum, and its weight necessitated all sorts of special machinations to hang.

Dan and Debbie moved here full-time last year. Their family comes up every weekend they can. Dan’s brother Jim is renovating one of the smaller cabins a stone’s throw away. Their brothers Bill and Matt purchased two other cabins, and the Higginses’ daughter owns an octagonal home that used to be the honeymoon suite of the old Mooselookmeguntic Lake House, of which these cabins were once a part. (The hotel burned to the ground in 1958, before the Higginses had set foot here.)

“This team did a fabulous job of preserving the history and feel,” says Dan with an ear-to-ear smile. In so doing, they also rekindled cherished memories for the entire Higgins clan. 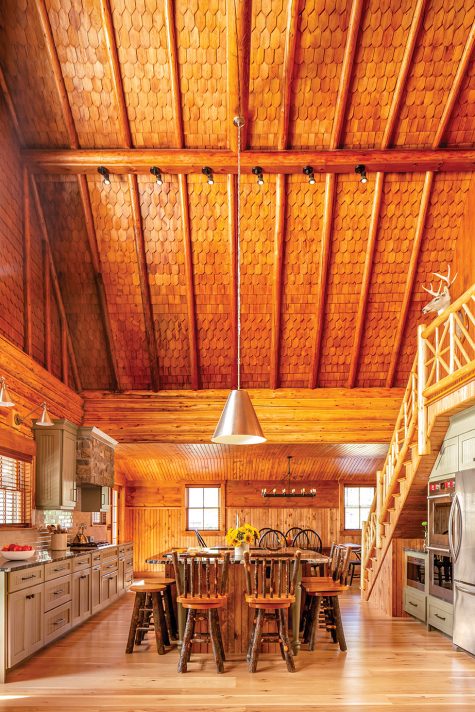 The shingle ceiling in the great room is original. 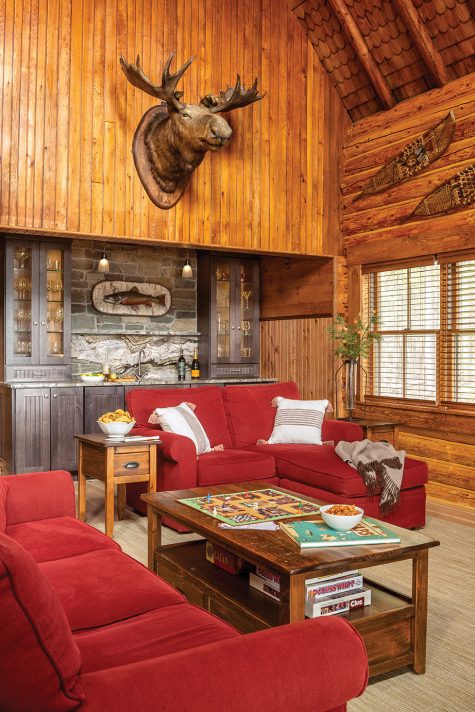 Rangeley Building and Remodeling appropriated the first-floor bath and laundry room to create a wet bar, over which hangs a 1940s moose trophy acquired from a museum. The great room furniture was the owners’. 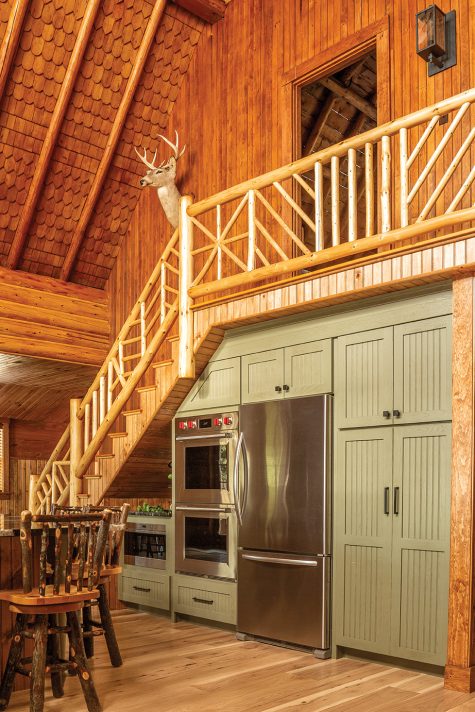 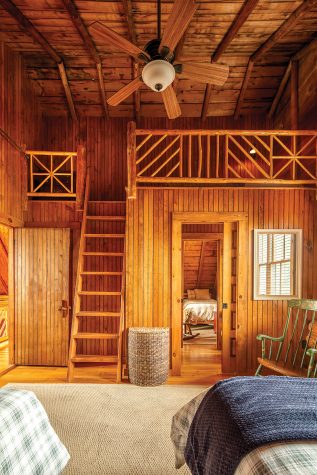 Upstairs, the bunk rooms were left intact, including the sleeping loft in one. There is now a Jack-and-Jill bath between the rooms for modern convenience. 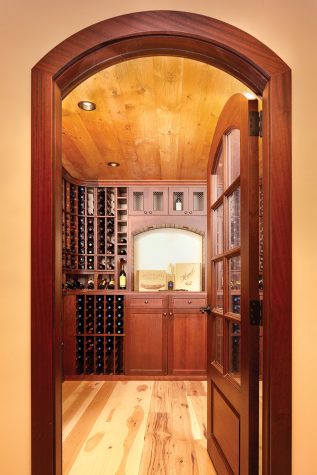 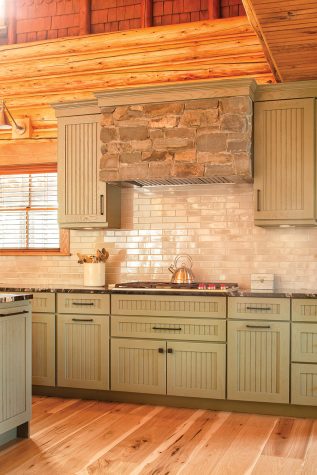 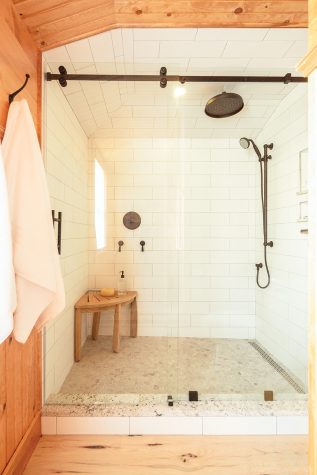 The white tile and stone shower pan in the owners’ bath came from Morningstar Stone and Tile. 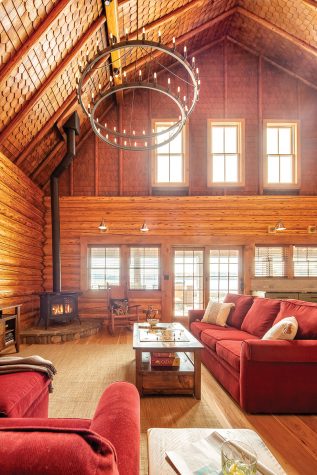 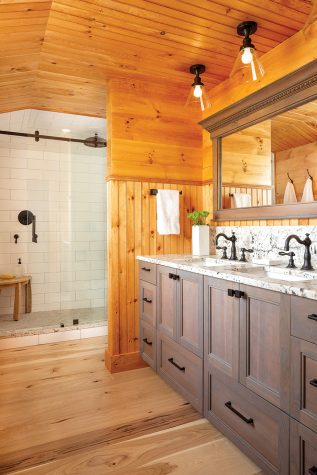 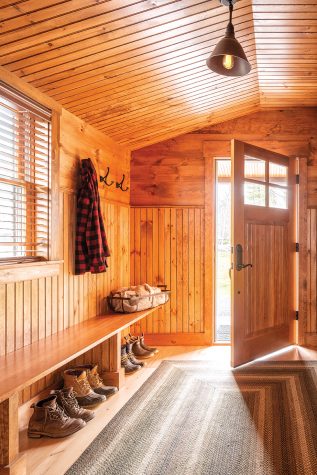 The enclosed porch became a mudroom entry and the dining room. 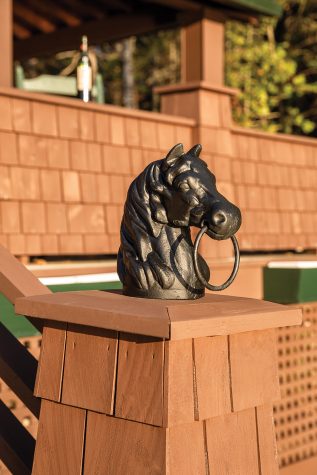 A newel ornament recalls the days when visitors hitched their horses to the porch.