In Yarmouth, Acorn Deck House Company collaborates with a couple on the custom prefab of their dreams 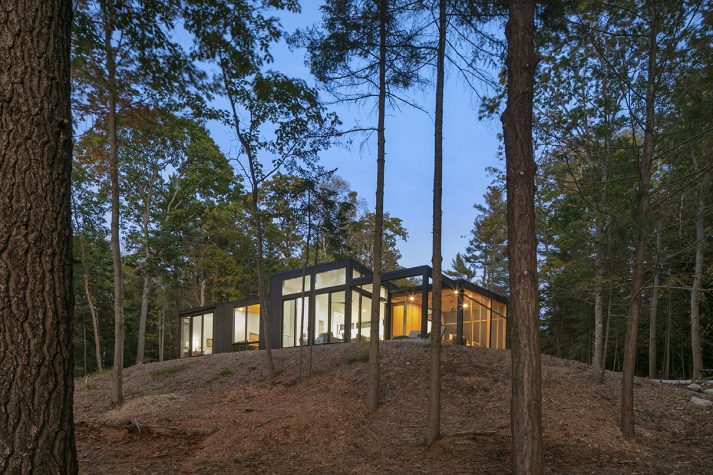 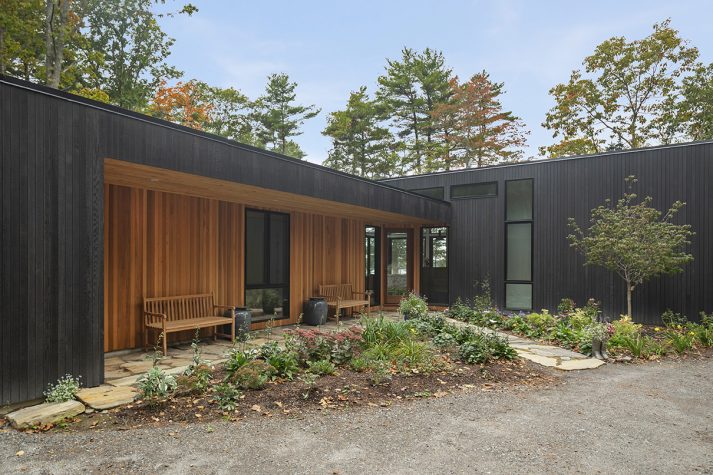 The exterior is clad in a mix of natural and charcoal-stained cedar. 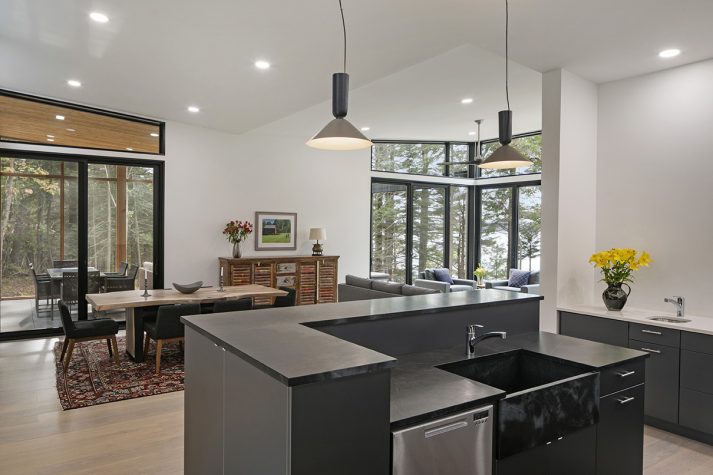 The couple tapped builder Mike Corson to erect the structure and build out the interiors. A simple, functional kitchen, which features storage by Metropolitan Cabinets and Countertops, opens up to both the dining and living areas. 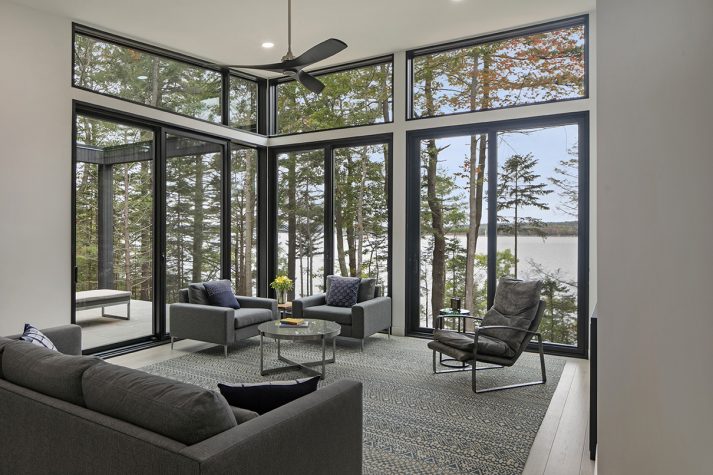 Expansive windows in the living area showcase the view. The sofa and cocktail table are from Crate and Barrel, the armchairs from Article, and the Nepalese rug is from Yayla. 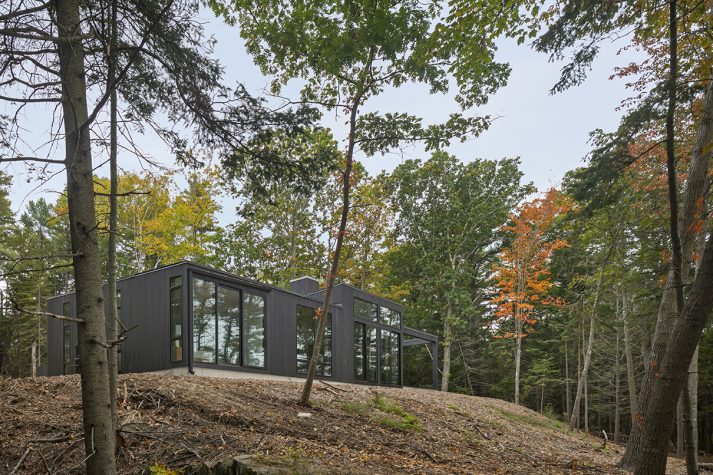 The high ceiling provides a sense of space, but it feels cozy, too,” he says. To give the structure a more minimalist appeal, Acorn Deck House Company designed the single-story, three-bedroom home without any overhangs. “Editing and reducing is hard for architects, but we wanted to keep it simple,” says architect Michael Hawkes. 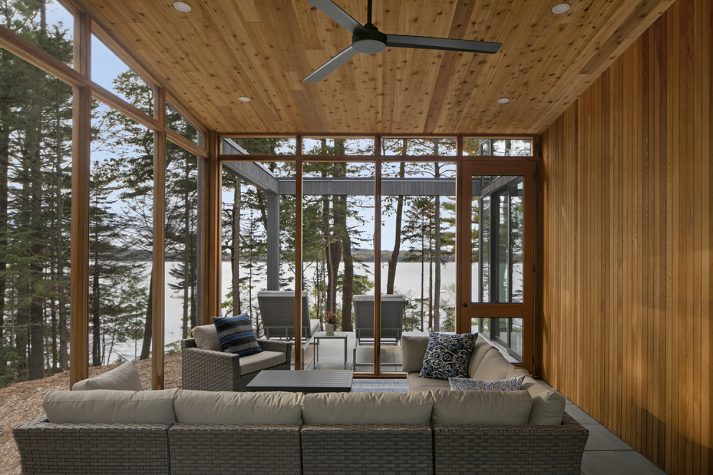 Murray’s favorite summertime perch is the cedar-clad screened porch, which opens onto a patio. The seating was purchased through Wayfair.

When you finally decide to move forward with the dream home you’ve been imagining for years, the finished product can’t come soon enough. Boston-based Georgia Murray and Mark Maloney first chose Yarmouth as their vacation spot for its proximity to their grandchildren, and now they love it so much that they plan on moving there full time—hence the recent decision to build their forever home. They wanted no part of a lengthy design and construction process with its inevitable delays, though, so they began researching prefabricated residences. Unfortunately, all the prebuilt manufacturers they found were too strict, according to Maloney, offering no wiggle room in terms of the design. The couple eventually landed on Massachusetts-based Acorn Deck House Company, which specializes in custom panelized prefabs (the estimated time frame wasn’t as quick as a modular home, but still less than traditional stick construction). “We’re both real estate junkies and had learned about Acorn a long time ago,” recalls Maloney. The company actually started as two different prefab companies during the 1940s and 1950s, Acorn Structures and Deck House, which merged in 1995. Its most recent iteration, concentrated on fully customizable prefabs as opposed to stock plans, took hold in 2009. While Acorn does the majority of its work in the Northeast, it ships across the country and internationally, having completed projects in Israel, Japan, and the United Kingdom.

For this project, Murray and Maloney worked with Acorn architect Michael Hawkes and project director Joy Fernandes. The couple had never built a house from the ground up, but they came to the table with plenty of ideas for their two-acre wooded site, which slopes dramati-cally down to the water that’s approximately 100 feet away. “The property is beautiful,” says Murray. “You’re perched way up on a cliff, but you feel as though you could reach out and touch the water.” The couple had even gone so far as to sketch out a floor plan themselves. They collaborated with Hawkes to tweak their original vision, resulting in a final design that still feels like them, only better. “Michael respected what we wanted but offered helpful suggestions,” explains Murray. “He found the flaws with our sketch and fixed them in a way that still made us happy.” For example, the couple had initially anticipated a long, angular structure with every room exposed to a killer water view, but unfortunately, the lot lines didn’t allow for it. In the end, Hawkes conceived a 2,215-square-foot three-bedroom residence that features a T-shaped footprint that puts the garage and both guest rooms perpendicular to the main living spaces and primary bedroom, which run parallel to the coast. In doing this, he was able to orient all the main rooms toward the stunning views, while the guest bedrooms—which aren’t used daily—are tucked between the garage and the living area and can be closed off from the rest of the residence when not in use. Mandates included single-floor living, high ceilings in the living room, an abundance of windows to take in the expansive vistas, a kitchen that’s comfortable for two cooks, a soundproof den, heated floors, and two owners’ baths. Design-wise, says Hawkes, “the clients wanted a modern, clean-lined residence that fits in with nature. It was also important to them that the house be inconspicuous as one approaches.”

Hawkes imagined a sleek charcoal-stained cedar structure that’s embedded into the natural topography of the site. The form appears even more minimalist thanks to the lack of roof overhangs. But there are a couple of unexpected touches that lend interest to the front elevation, including clerestory windows that bring in southern light and a carved-out entry that’s highlighted with contrasting naturally stained cedar. “It’s easy to overthink and overcomplicate a design and much harder to edit and reduce, like we had to do here,” explains Hawkes. And although the architect and clients didn’t have multiple siting options to work with (the shoreland setback restrictions forced them into a particular building area), the residence fits in seamlessly. “Even though the house itself is a bit dramatic, it sits into the land nicely,” says Maloney. “Georgia and I didn’t want it to feel obtrusive.”

The residence may look relatively simple from the road (passersby mainly see the garage and front entrance), but expansive glass walls on the entire water-facing facade bring the outside in while maintaining the homeowners’ privacy from neighbors. Inside, the main rooms are oriented toward the view, with the living area, den, and primary bedroom along the exterior wall, and the kitchen and dining room slightly set back yet open to the adjacent living area for easy entertaining. “We like to entertain in a laid-back way, enjoying fresh fish over a three-hour lunch with great friends,” says Murray, who confirms that the efficient kitchen functions well for two people, thanks to two sinks in the main area and a third in the adjacent pantry that’s used for prep. Off the living area are two more entertaining spaces: the patio and the screened porch, which is enveloped in natural cedar. It’s also Murray’s favorite place to unwind when the weather is nice. Maloney, on the other hand, has fallen hard for the den, which is soundproof and contains the only television in the entire house. “There’s a great view, and with the high ceilings there’s a sense of space while also feeling cozy,” says Maloney. Hawkes agrees, noting that it would be his go-to spot in the home, too: “You feel like you’re in the trees—especially with the cedar-clad ceiling,” he says.

Throughout the process, Acorn had the local support of Steve Grant, a structural engineer who has worked with Acorn on a dozen other projects, and the builder, Mike Corson, who had previously collaborated with the clients on their former vacation property, a pair of twin cottages in the area. “Sometimes a custom wood home can be more challenging to design than a commercial steel structure, but since this house is on one level it was pretty straightforward,” says Grant. And the actual construction went smoothly as well. All major structural components and wall panels (each piece typically measured six feet by ten feet) arrived at the site, where Corson’s team was ready to plumb the beams and lag-bolt everything together. “It went a lot faster than conventional stick construction,” recalls Corson of his first prefab experience. In addition to less time (and therefore less money) and less material waste, this type of construction has another big pro: stellar climate control. The building envelope is tighter, and fewer cracks and gaps are likely to form over time due to movement. “I was concerned about cold winters and lots of windows, and I wanted to be sure we could keep the house heated without it being too costly,” says Maloney. Both homeowners attest to how comfortable the home feels year-round. Once the building was enclosed, Corson worked with the clients to source finishes, kitchen and bath appliances, and cabinetry. Murray and Maloney took ownership of the furnishings, filling the house with contemporary pieces—mostly from the Boston area—plus a few vintage items and a custom rug made in Nepal. When all was said and done, the entire process—from the initial meeting to move-in day—took only about 15 months, and the clients couldn’t be more thrilled with the result. “The house lives much bigger than it appears from the outside,” says Maloney. Hawkes also counts the project as a great success, citing the clients’ shared vision and decisiveness as major contributing factors. “We ended up with something efficient, minimalist, and simple,” says the architect. “At night, when the lights are on, it reminds me of a lantern in the woods.” 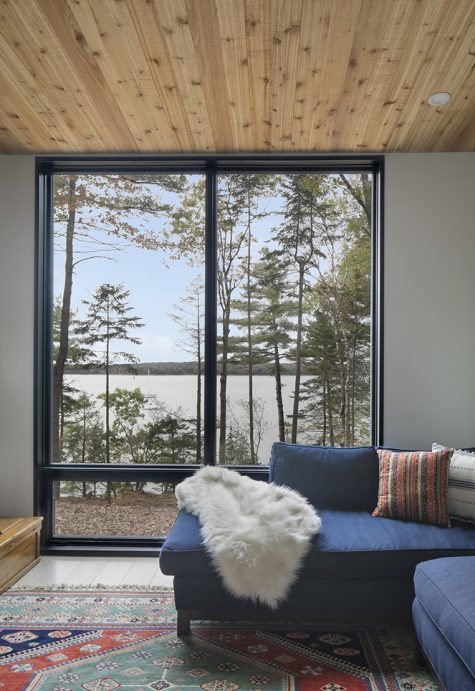 A soundproof den—complete with a cedar ceiling—is Maloney’s favorite room. 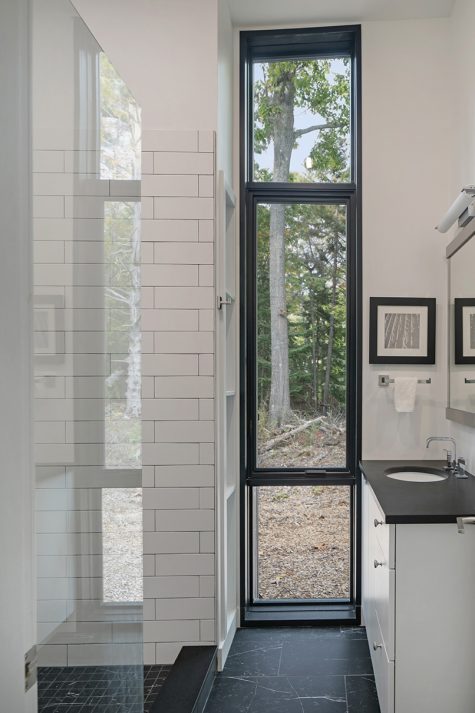 One of the homeowners’ mandates was separate primary baths. Maloney’s bath features a classic black-and-white scheme with all tiles sourced from Morningstar Stone and Tile. 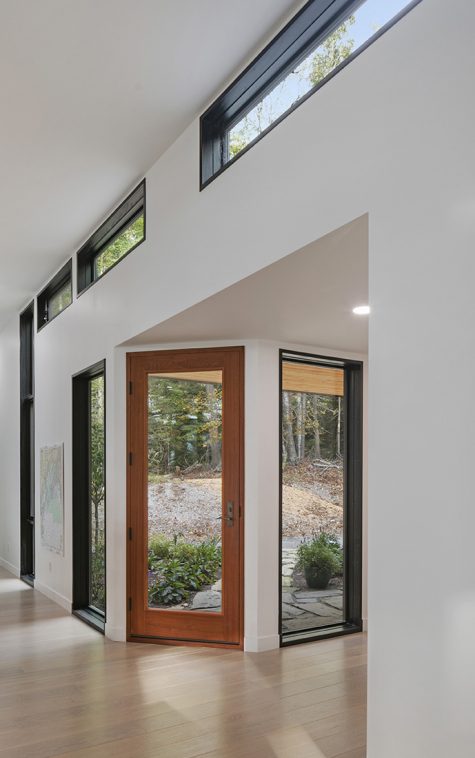 Clerestory windows allow southern light to flood into the residence.