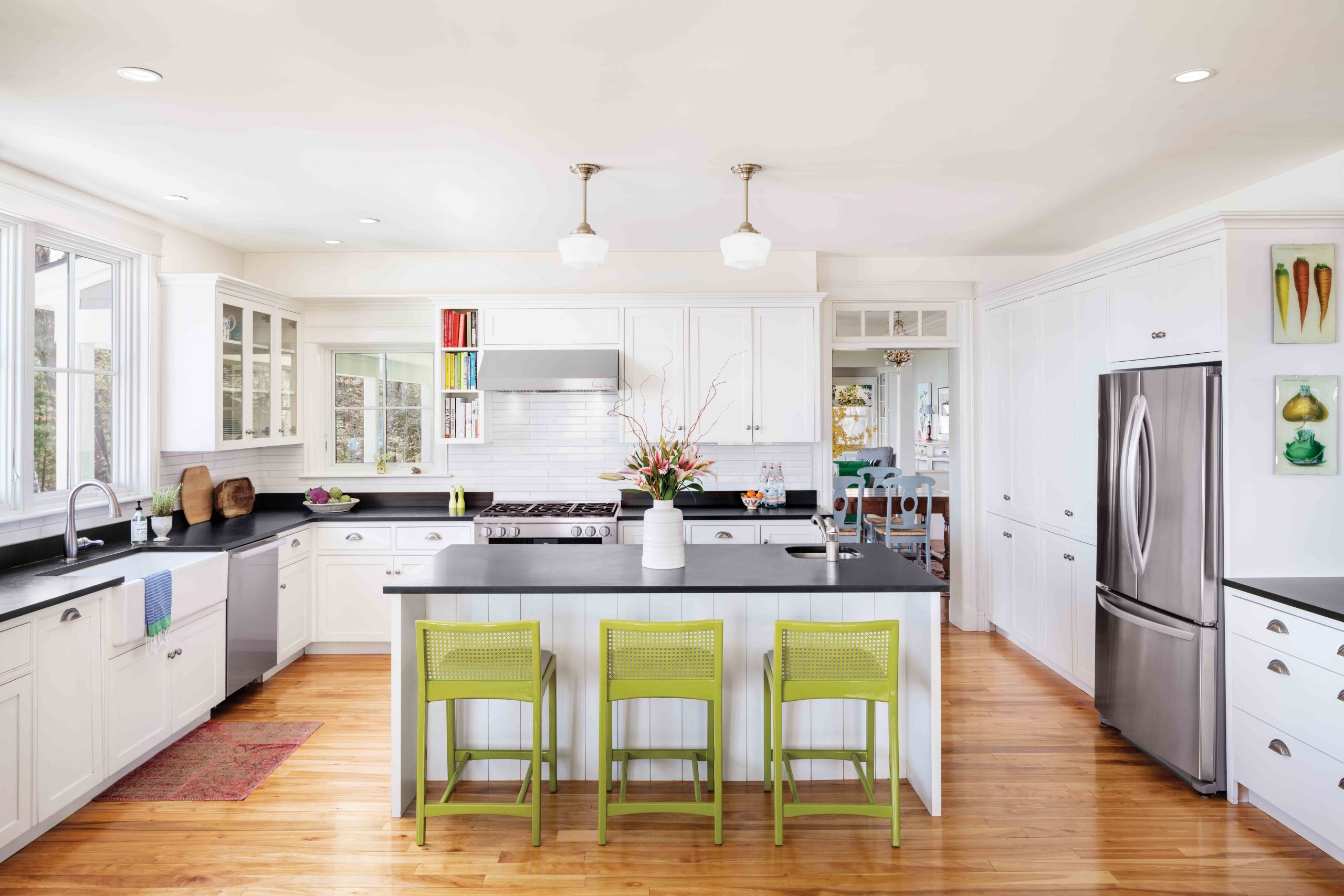 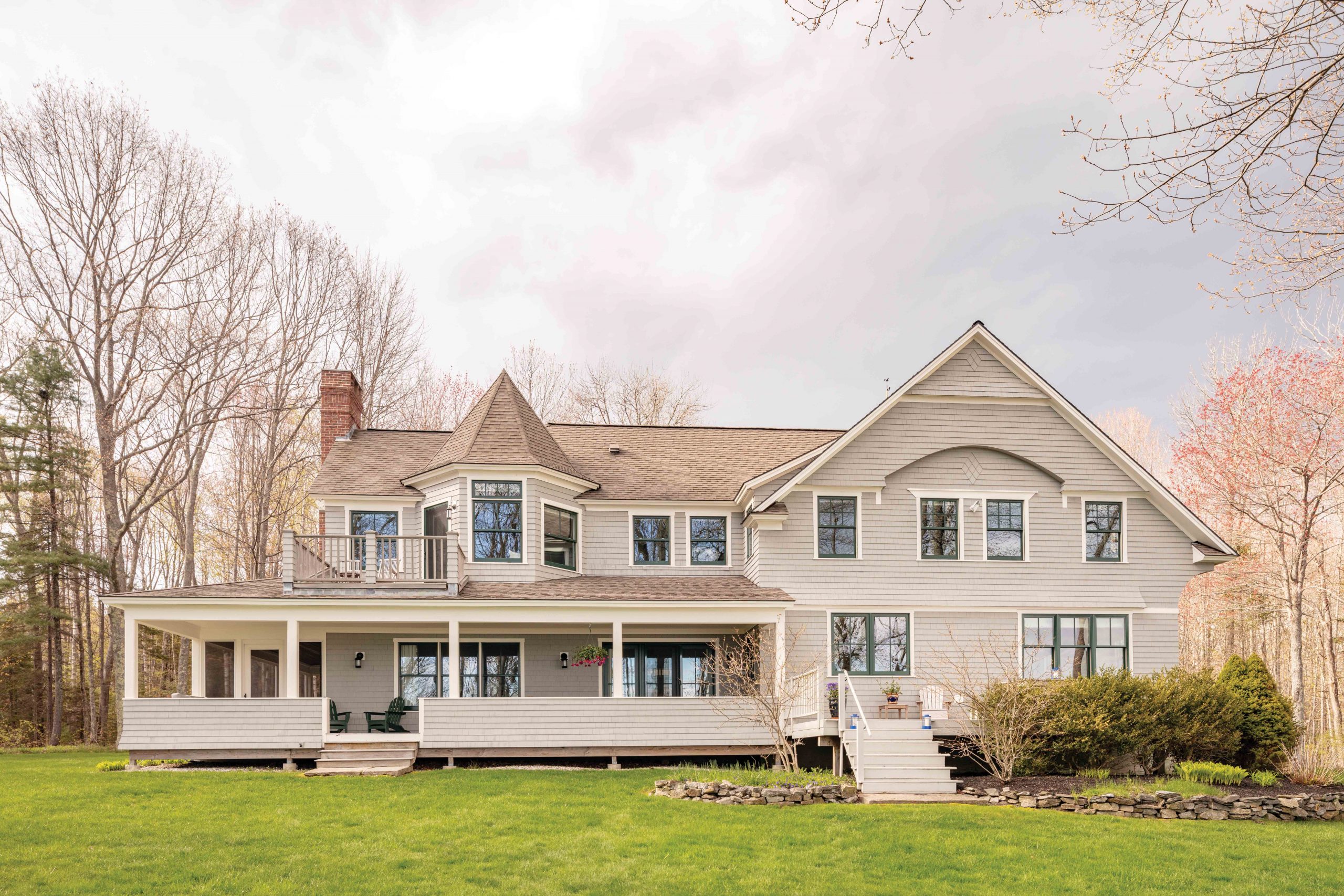 A wraparound porch and balcony off the owners’ bedroom capitalize on the bayside views. 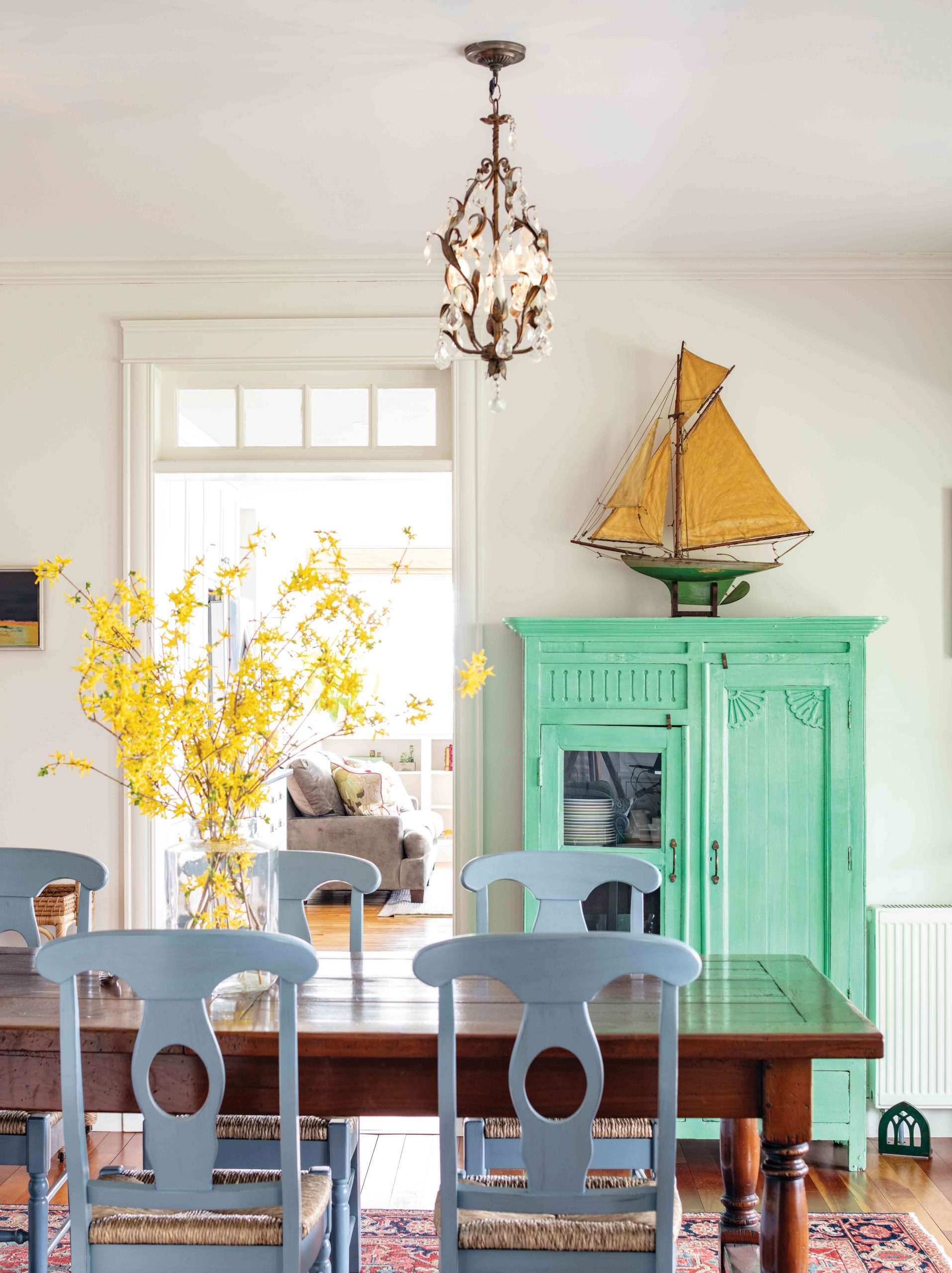 The interior design team from Huffard House helped the Birchbys unify new furnishings with pieces brought along from their former home, such as the dining table and chairs. “We made a conscious effort to avoid an obvious nautical theme,” says Emily Birchby, “but I couldn’t resist that antique boat.” The green cupboard is from Asia West in Portland. 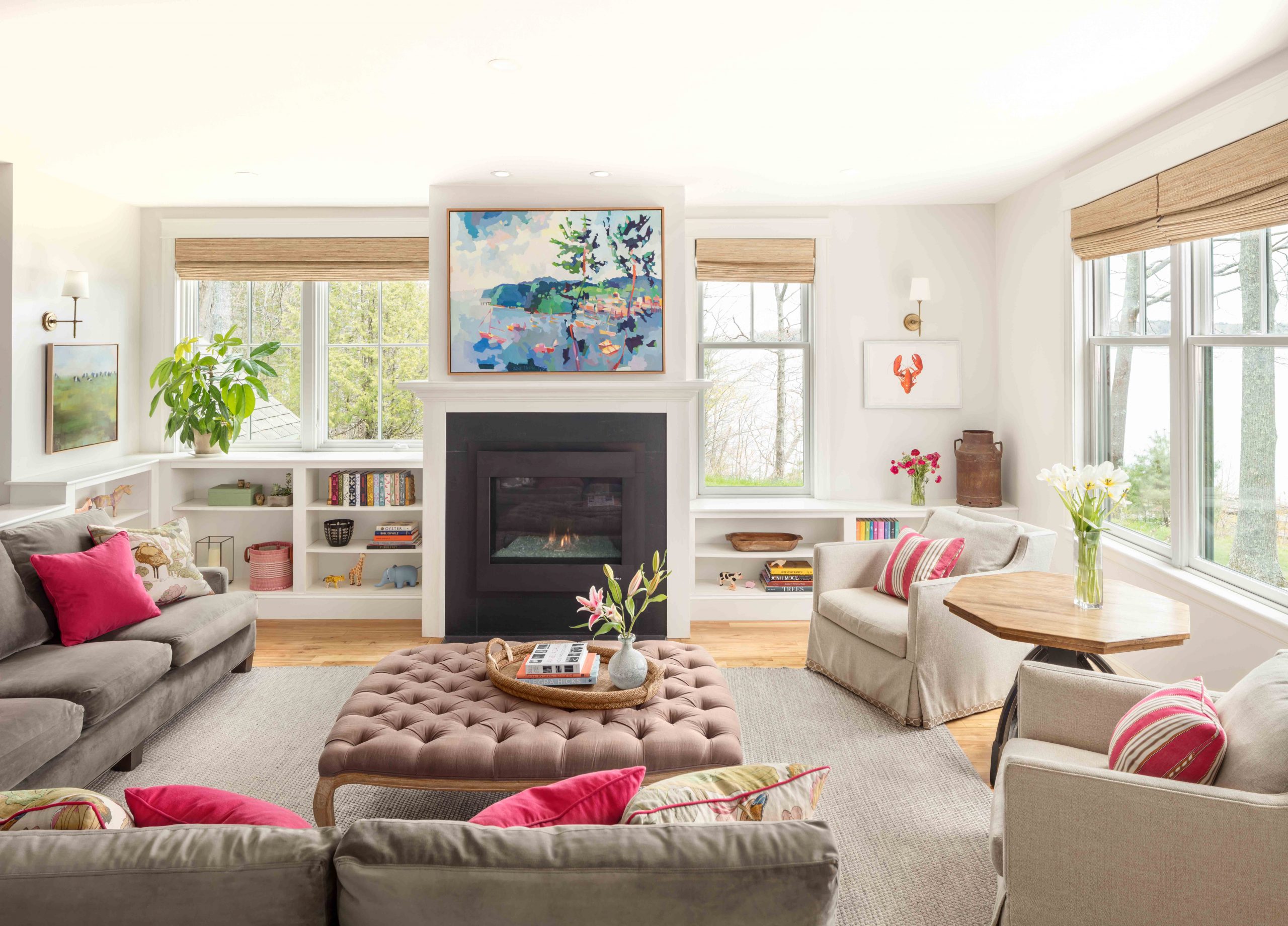 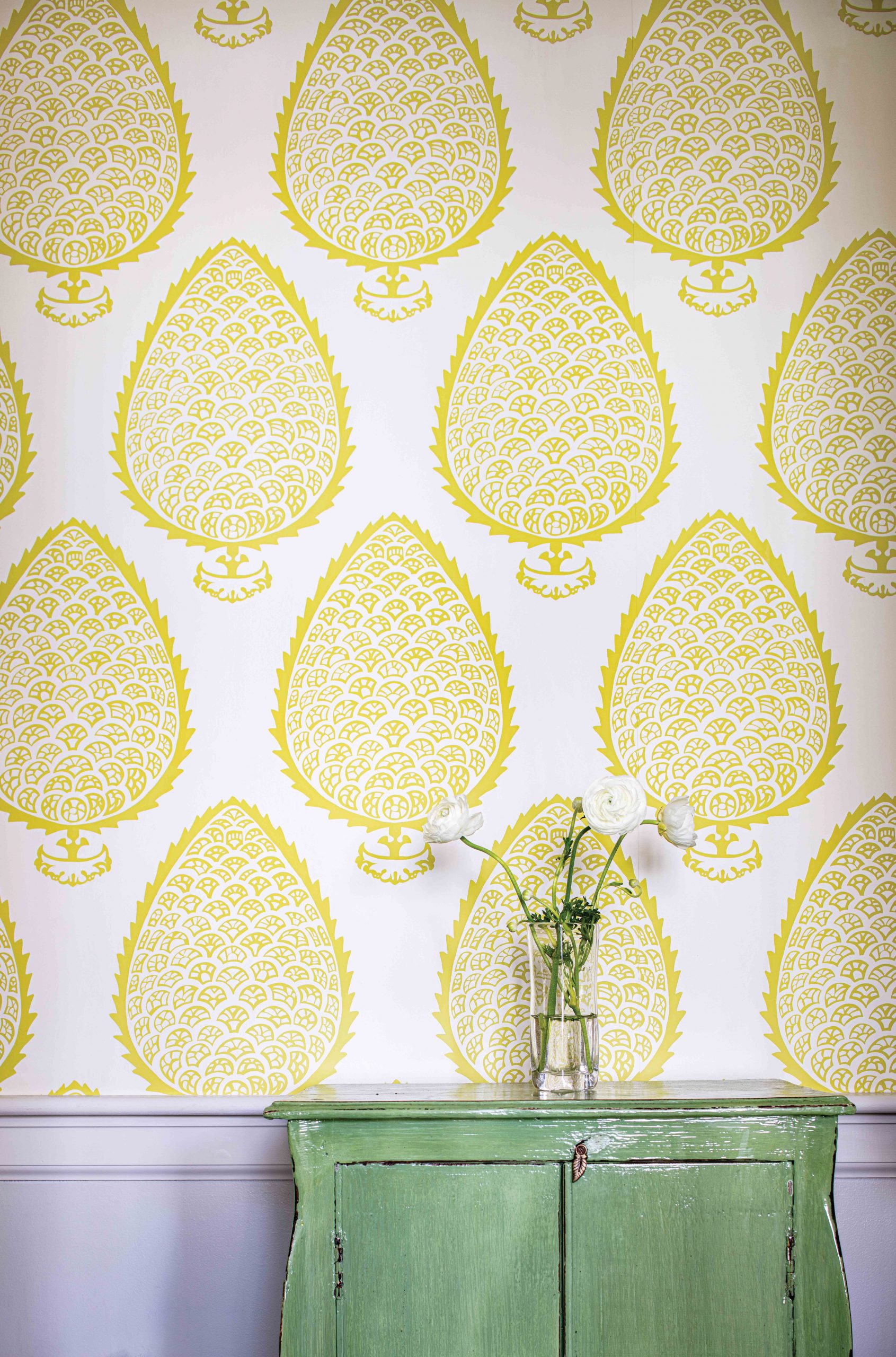 Bold wallpaper—like the Katie Ridder “Leaf” pattern that covers the upper wall of the private toilet room off the owners’ his-and-hers bath—introduces an element of fun in combination with luminous Benjamin Moore paint colors that seem to change with the light. 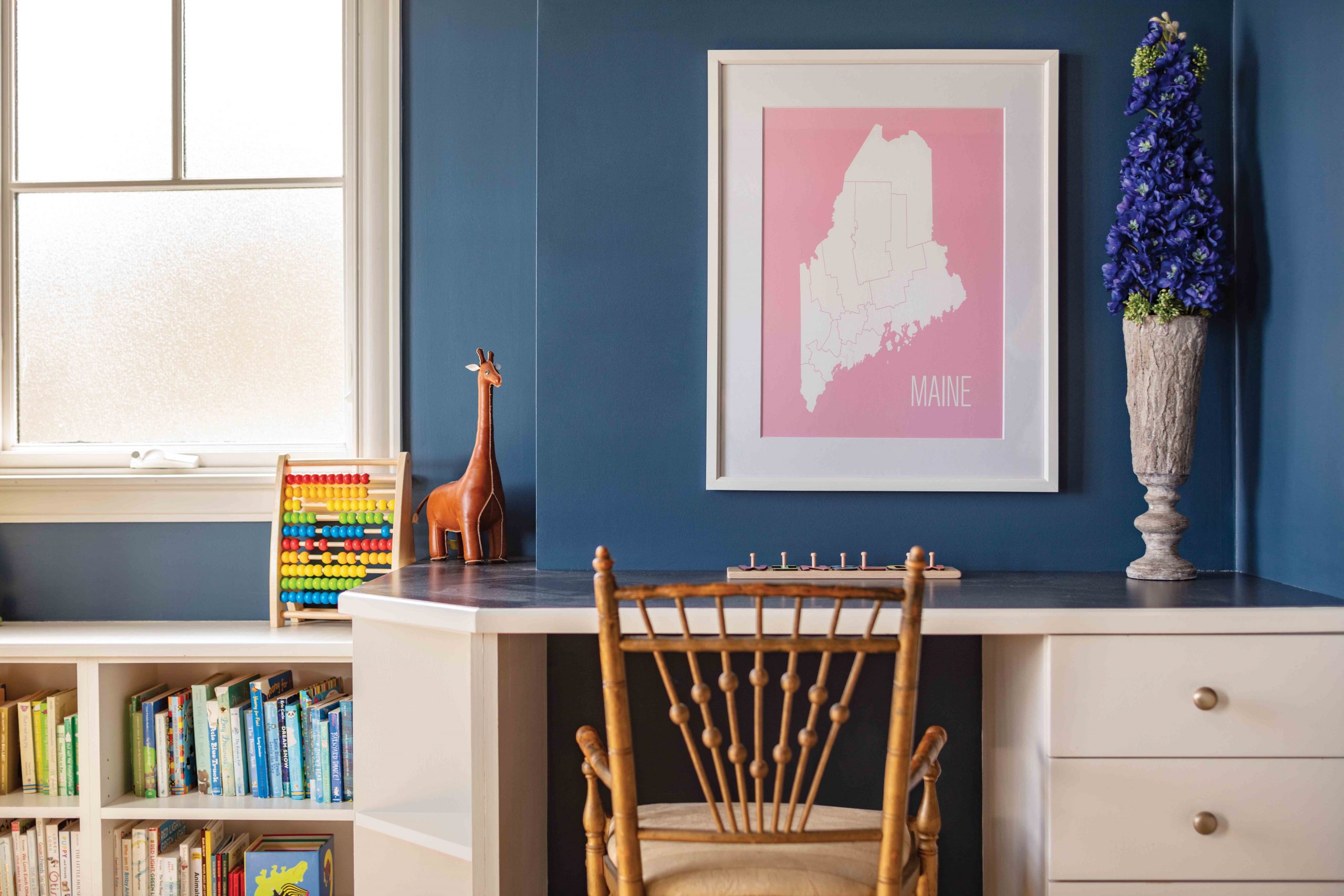 A vintage rattan chair pulls up to a builtin desk in a corner of the girls’ bedroom. 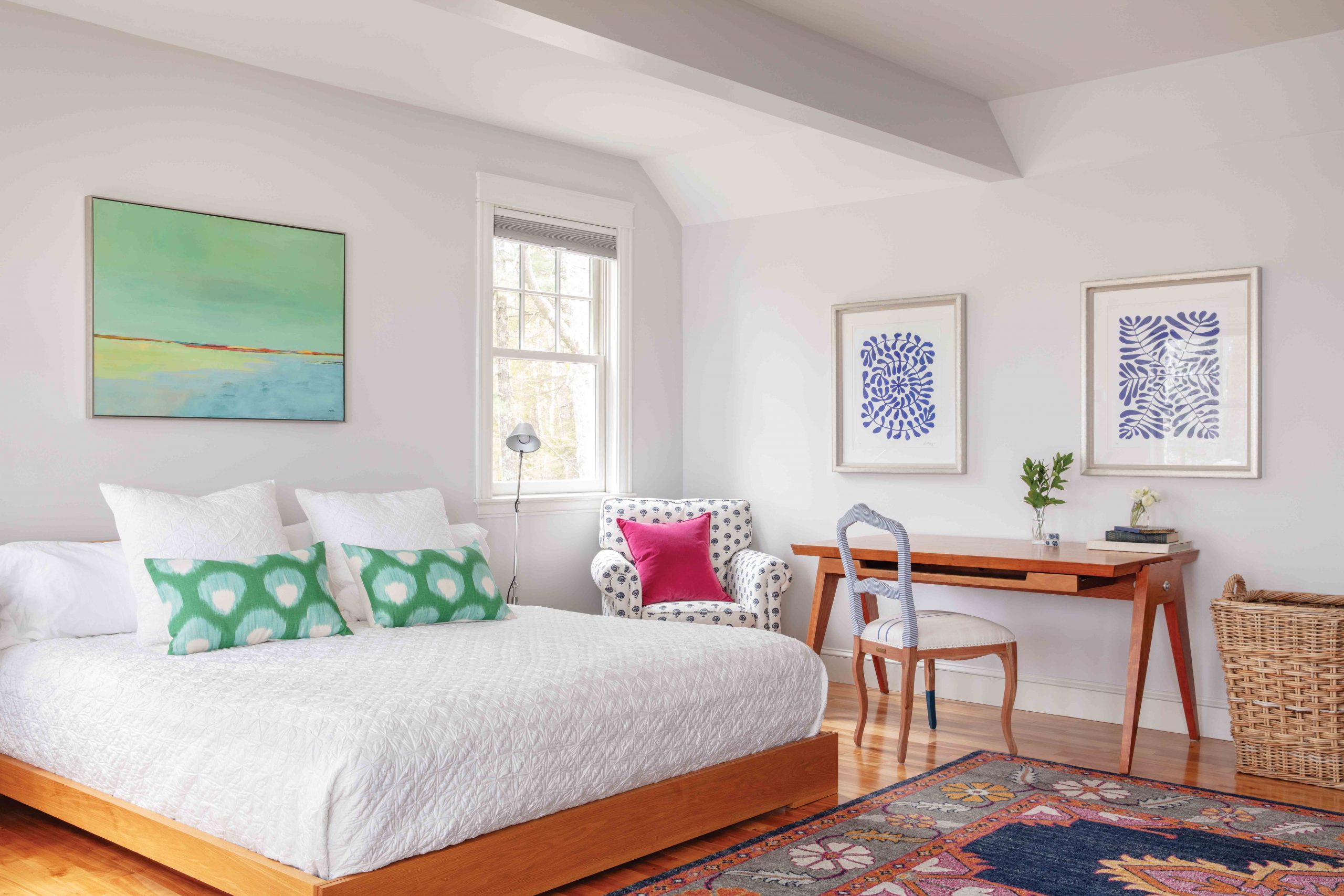 An abstract landscape by Ann Sklar hangs on the wall above the couple’s bed, which they brought from their previous home, along with the handcrafted cherry desk from Angela Adams in Portland. 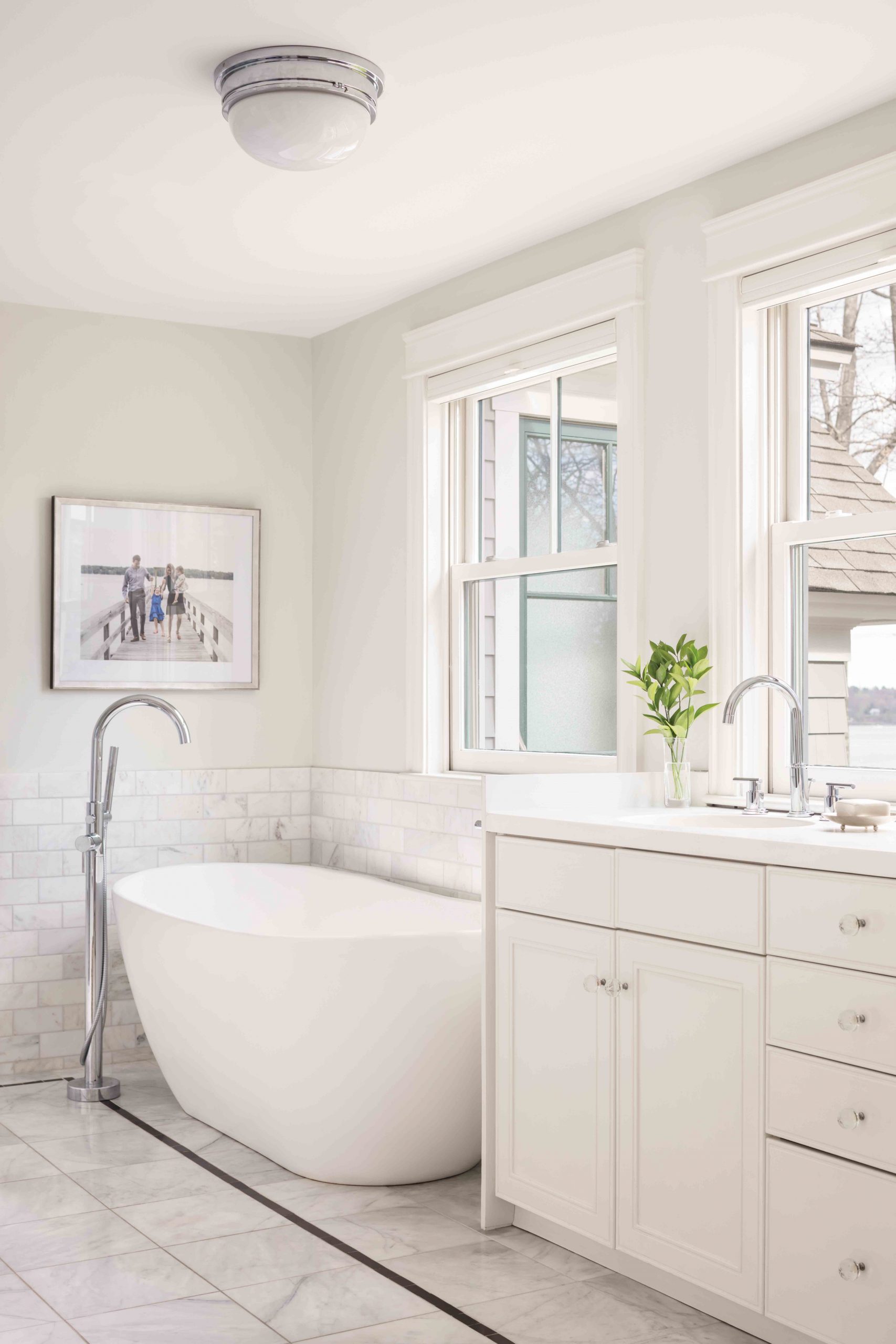 The couple installed a freestanding tub from Signature Hardware in the marble-tiled bathroom they share. 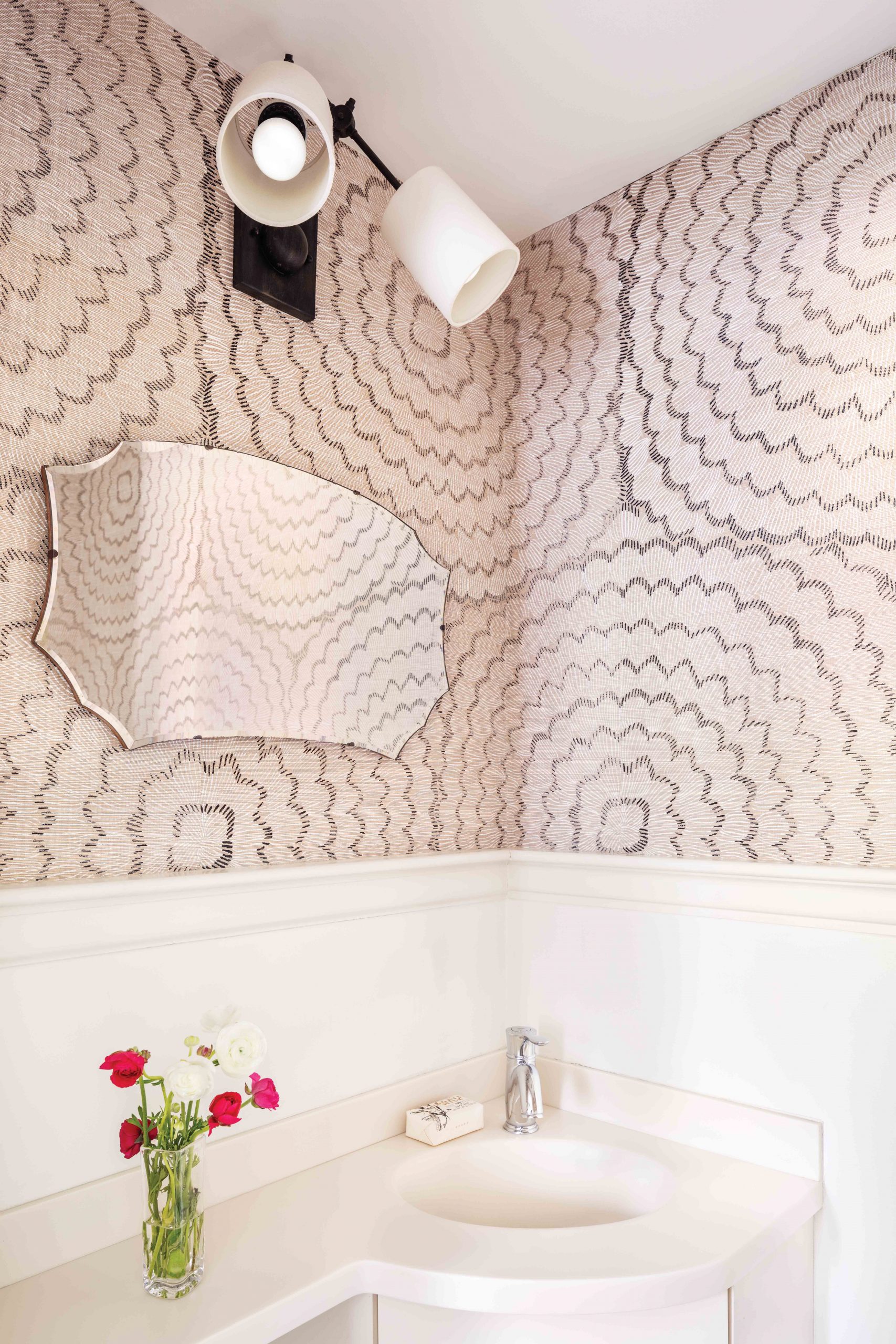 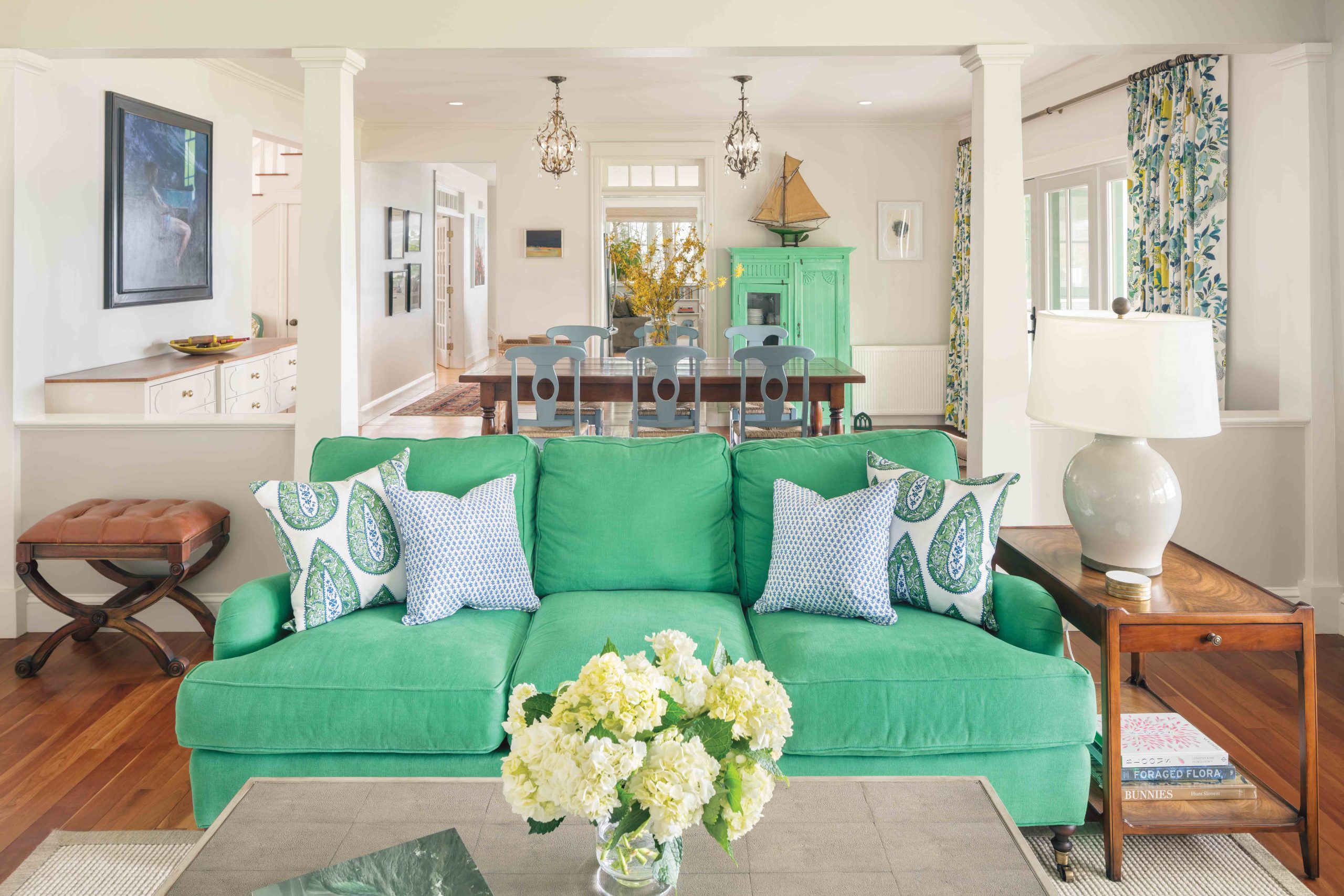 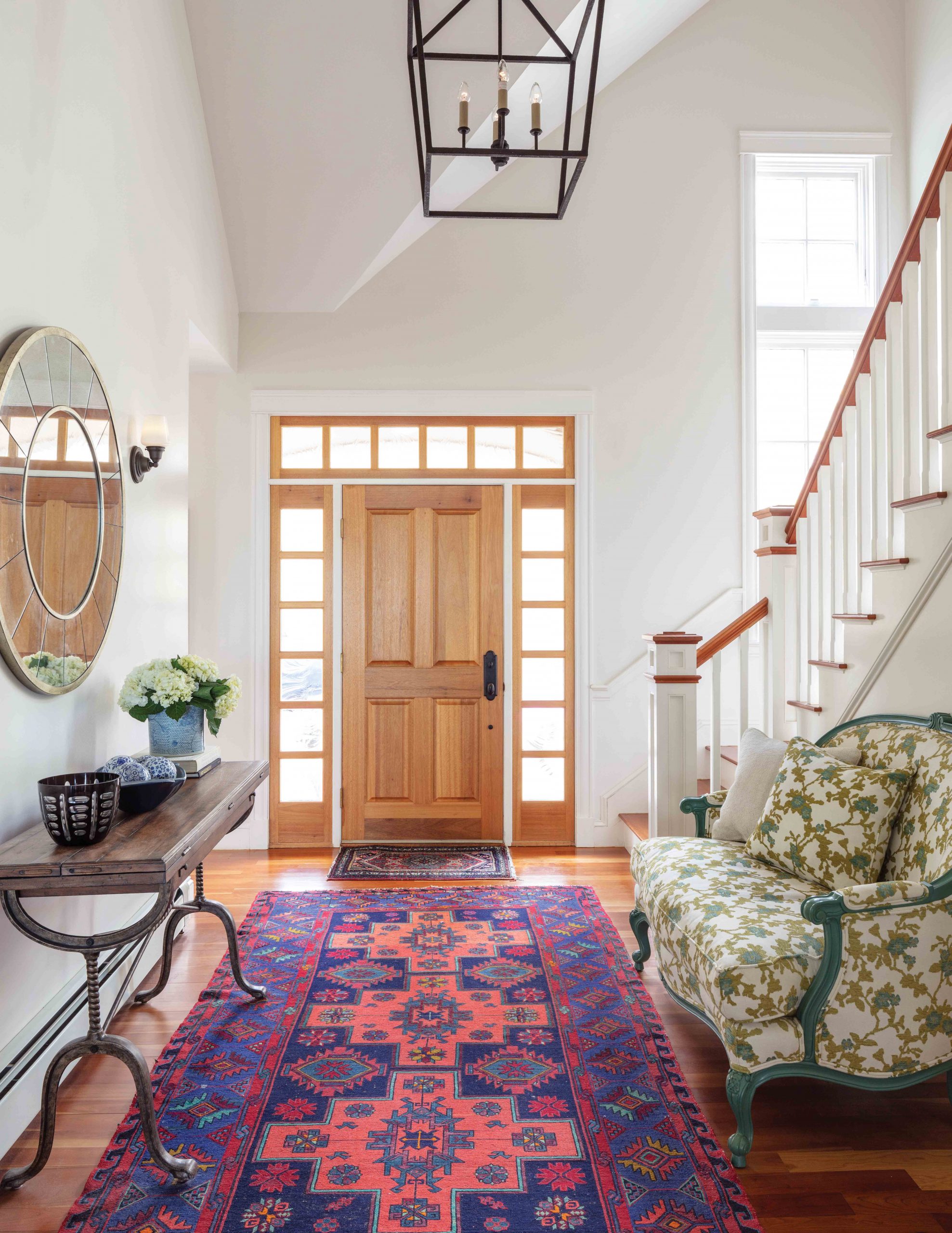 Patterns mix and mingle easily in the entry hall, where a rug from Lovell Hall Antiques pairs with a vintage upholstered settee formerly used in the couple’s Portland kitchen. 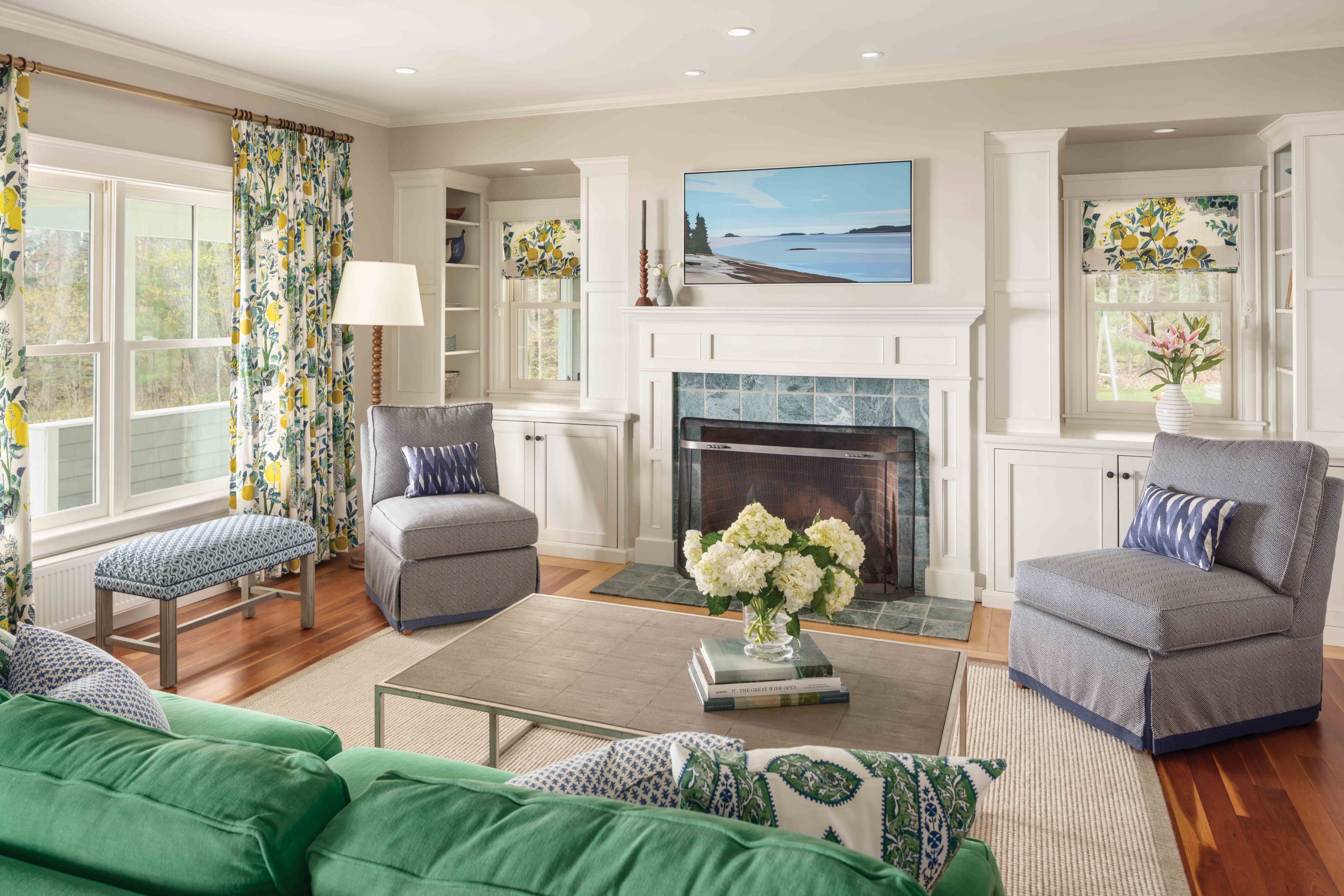 Interior designer Bronwyn Huffard’s talent for unexpected patterns, colors, and textures harmoniously is demonstrated in the living room, furnished with a Lee Industries sofa upholstered in “Ferris Jade” cotton, CR Laine slipper chairs upholstered in navy herringbone, and window treatments of Schumacher’s “Citrus Garden” linen—an archival Josef Frank print handdrawn more than 60 years ago. “I love that fabric so much I decided to use it in the living room and the dining room,” says Emily.

Buy a new house? Or build one? Emily and Matt Birchby carefully weighed the options when they began hunting for a larger home back in 2014.

Just a couple of years earlier, the Birchbys had completed a major restoration of a nineteenth-century home on Munjoy Hill, in Portland’s historic East End. “We enjoyed the challenge of that project and really loved that old house and our years in the city,” says Emily, “but my husband and I were starting our family, and we needed room to grow in a place that felt more open, a little quieter, and a little greener.”

The couple found all that just 15 miles away, in the form of a 1990s house situated on a scenic water-front lot, not far from where Emily herself grew up and went to college. As seasoned renovators, the couple easily identified the long-term potential of this four-bedroom, four-bath shingle-inspired home in Yarmouth. What’s more, they appreciated the beauty and rarity of its wooded waterfront property overlooking Casco Bay. With banks of double-hung windows capturing views in every direction and 4,500 square feet of living space ready to be reshaped at the new owners’ pace, this was a place the couple could envision living in comfortably for many years to come.

But first, another renovation.

To help them make the home’s classic ’90s interior function better for an active family with babies and toddlers on the horizon, the Birchbys returned to the team they had worked with to overhaul their first home: Rob Whitten, founder of Portland-based Whitten Architects, and the general contracting team at R.P. Morrison Builders in Windham, led by father-son partners Roland and Joshua Morrison.

“Matt and I knew, after the work they did on our Portland house, which was much more extensive, that they would easily be up to this challenge,” says Emily. Structurally, the house was in good shape and well oriented toward the scenic views, but the kitchen was on the side of the house that receives only late-day sun, and it felt isolated from the adjoining rooms.’’

Once the team worked out the interior flow and determined which rooms were going where, the Birchbys called in Bronwyn Huffard, owner and lead designer at Huffard House in South Portland, to advise on specifics ranging from paint color and wallpaper selection to furniture placement to window treatments and upholstery.

Together, Huffard, the Morrisons, and Whitten helped the couple pinpoint which goals they needed to tackle before their target move-in day in the spring of 2015, and what projects they could stretch out or save for further down the road, while making the most of their current budget, limited time, and precious views. It was agreed that the house on Casco Bay called for a gradual evolution, with additional improvements being made in stages, as the family grows and their needs change.

At the tip-top of the Birchbys’ priority list came a plan for a spacious new kitchen with plenty of pantry space and a clear sight line from kitchen to dining room to living room. Next, the corner of the house formerly occupied by the kitchen was transformed into a welcoming family room with a gas fireplace and custom built-ins fabricated by Rondeau Woodworks. “We wanted the house to be comfortable and a little less formal, and it was important for us to open up the views from room to room so we could easily watch the children while they’re playing. When the kids are little, you can’t take your eyes off them for a minute,” says Emily, now a mother of two daughters, aged five and three, with another child expected this spring.

Upstairs, the couple created a cozy sitting area in their bedroom and installed new doors leading to the balcony that overlooks the bay. In the owners’ bath, they swapped out the existing tub and substituted it with a luxurious freestanding vessel and faucet from Signature Hardware. “This renovation did not involve as much architectural planning as our first home, and we kept a lot of things as they were, but everything we did do made a huge difference,” says Emily.

The team from R.P. Morrison began gutting the first-floor living spaces in January 2015, adding extra insulation where needed. By May they had relocated the kitchen to the sunny side of the house, creating a flow of light and the desired views from kitchen to dining area to living room. A new family room with custom millwork and built-ins for books and toys took shape where the kitchen once stood. And the owners’ bedroom was fitted with new Andersen windows and doors, creating a cozy sitting area with easier access to the balcony overlooking the water.

Choosing finishes and furnishings for the new house has been the fun part. “But, to be honest, at the start, I was overwhelmed by the scope of this project. I found all the open space and the white walls overwhelming, and I didn’t know what I wanted or where to begin,” Emily admits. “This is where Bronwyn has been so helpful to me. She has a strong sense of what we feel comfortable living with—pieces that are traditional but nothing too formal or fancy. She helps me focus.”

Huffard found cues for the interior’s vivid colors and natural motifs in the Birchbys’ art collection, featuring paintings by contemporary local artists including Henry Isaacs (whom they commissioned to paint the family room’s impressionistic landscape of Northeast Harbor, their favorite summer place), Jill Matthews, and Greta Van Campen (a Bowdoin College grad, like Emily). “I enjoy meeting and knowing about the artists whose work we bring home,” says Emily, “and I tend more toward vibrant colors and patterns.”

Huffard helped Emily select subtle interior paint colors from Benjamin Moore that seem to change with the light, transforming the new rooms from sterile white boxes to serene backdrops for playful collections and personal memories. Practical touches include the introduction of performance fabrics, such as the family room sofa’s luxurious linen velvet upholstery, and multifunctional soft-edged furnishings, such as the family room’s tufted French-inspired coffee table/settee, which promise long-term comfort and functionality. Throughout, vibrant wallpaper patterns and textiles work with pieces the Birchbys collected themselves or brought along with them from their ﬁrst home to inject fresh personality into every room.

“These are clients who are adventurous with color and pattern, who know what they like, and who are willing to wait a little longer for something special of wonderful quality to be made, ordered, or saved up for,” says Huffard. “It’s such a pleasure to work with someone who has a good eye of her own and the patience to keep updating and adding over time.”

When deciding on major investment pieces or daring colors and patterns for the interior, like the vivid jade-colored living room sofa from Lee Industries or the new living room and dining room’s custom window treatments, fabricated from Schumacher’s timeless “Citrus Garden” linen, Emily puts herself to the test Huffard posed when they ﬁrst began working together: “She would ask me, ‘Do you think you will still love it in ten years?’ If you can say yes to that, it’s worth it.”

Patterns mix and mingle easily in the entry hall, where a rug from Lovell Hall Antiques pairs with a vintage upholstered settee formerly used in the couple’s Portland kitchen.

Bold wallpaper—like the Katie Ridder “Leaf” pattern that covers the upper wall of the private toilet room off the owners’ his-and-hers bath—introduces an element of fun in combination with luminous Benjamin Moore paint colors that seem to change with the light.

The couple installed a freestanding tub from Signature Hardware in the marble-tiled bathroom they share.