A Peaks Island cottage gets a thoughtful addition and update, complete with sophisticated midcentury decor and plenty of handcrafted touches 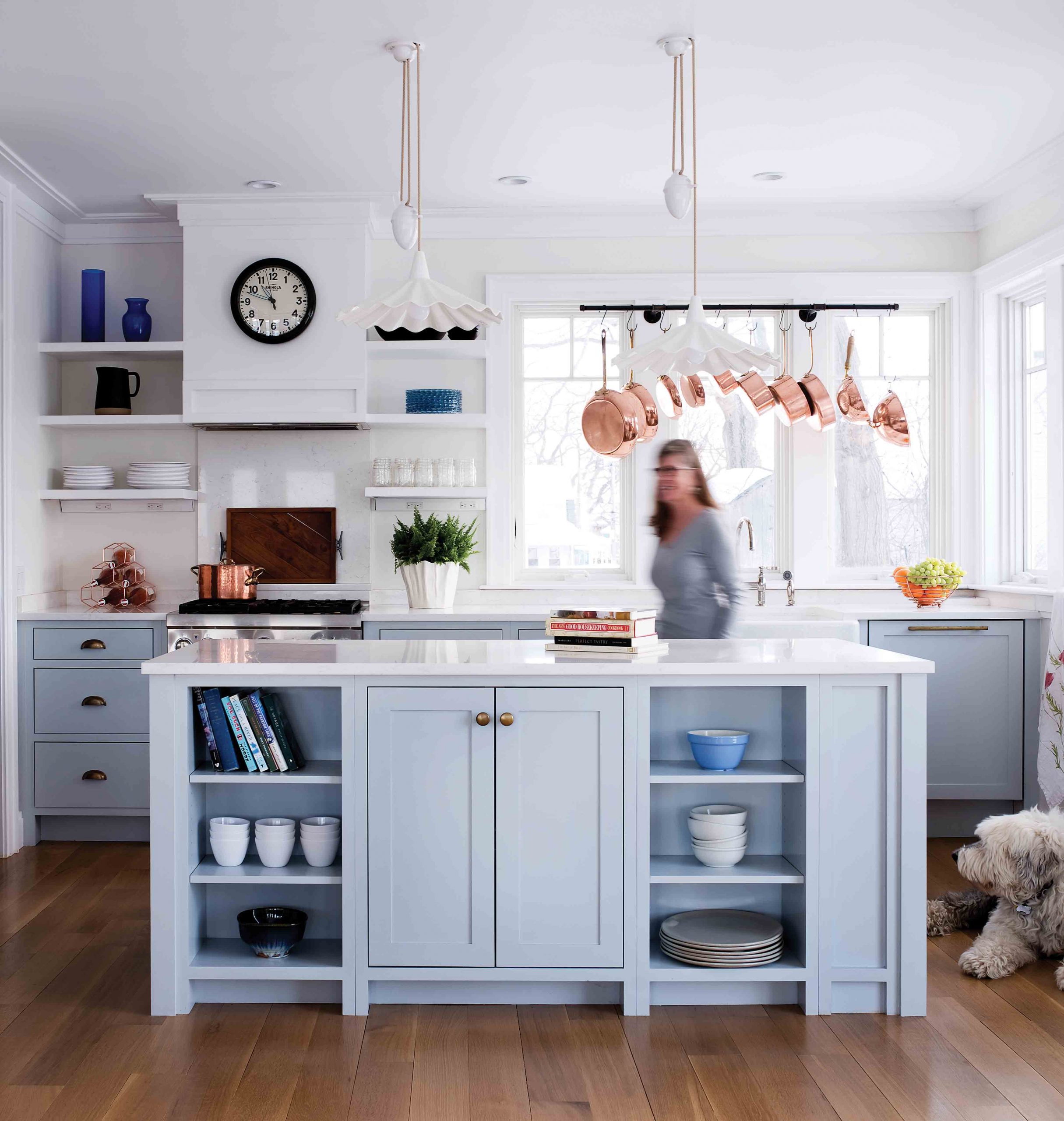 Anne and John Belden spent several summers in their Peaks Island cottage before deciding to renovate. With the help of architect (and neighbor) Jim Greenwell and builder Ben Trout, they knocked down walls, added rooms, and built a brand-new deck. The home is now lighter and brighter than ever, with even more ocean views. 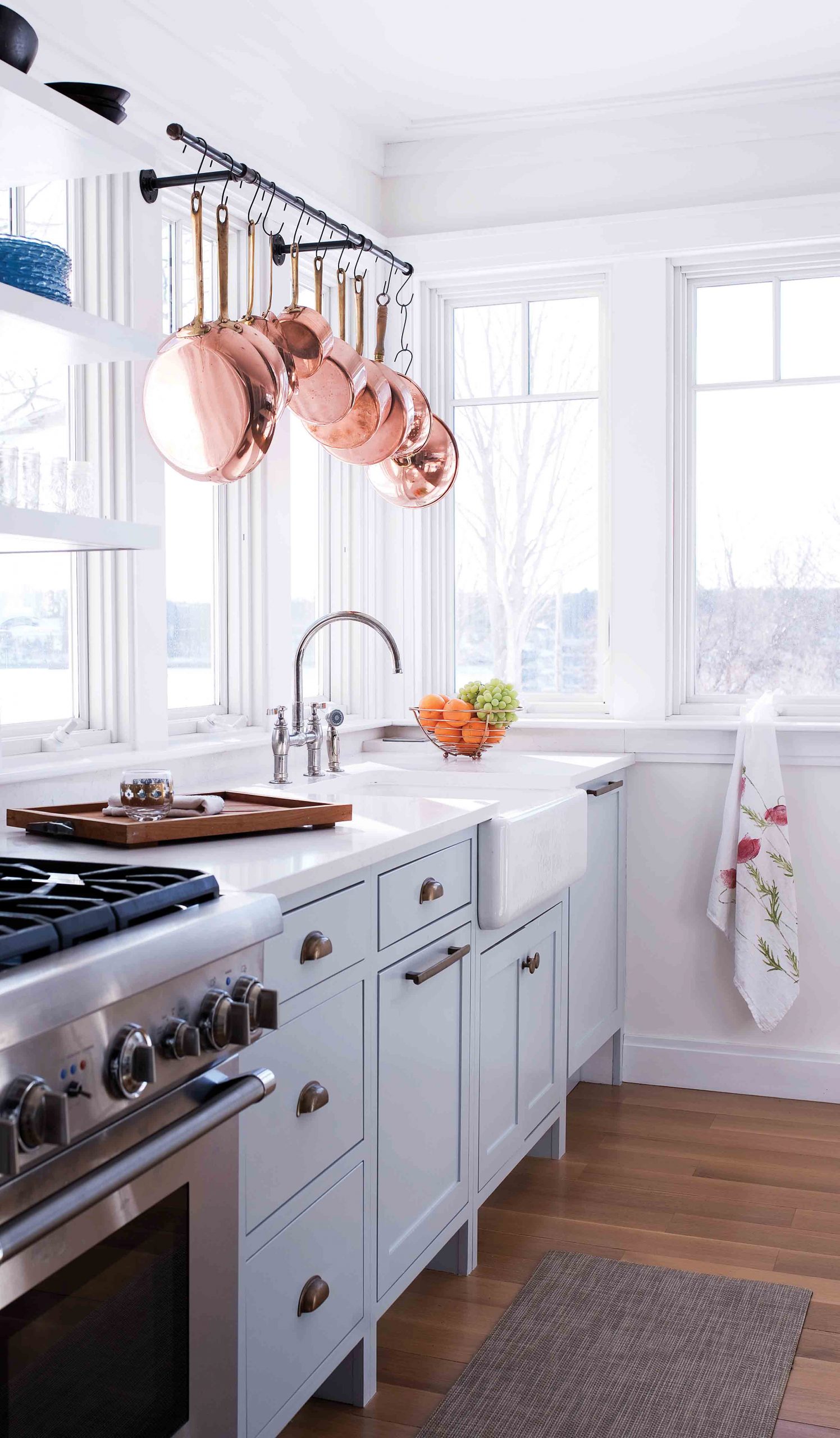 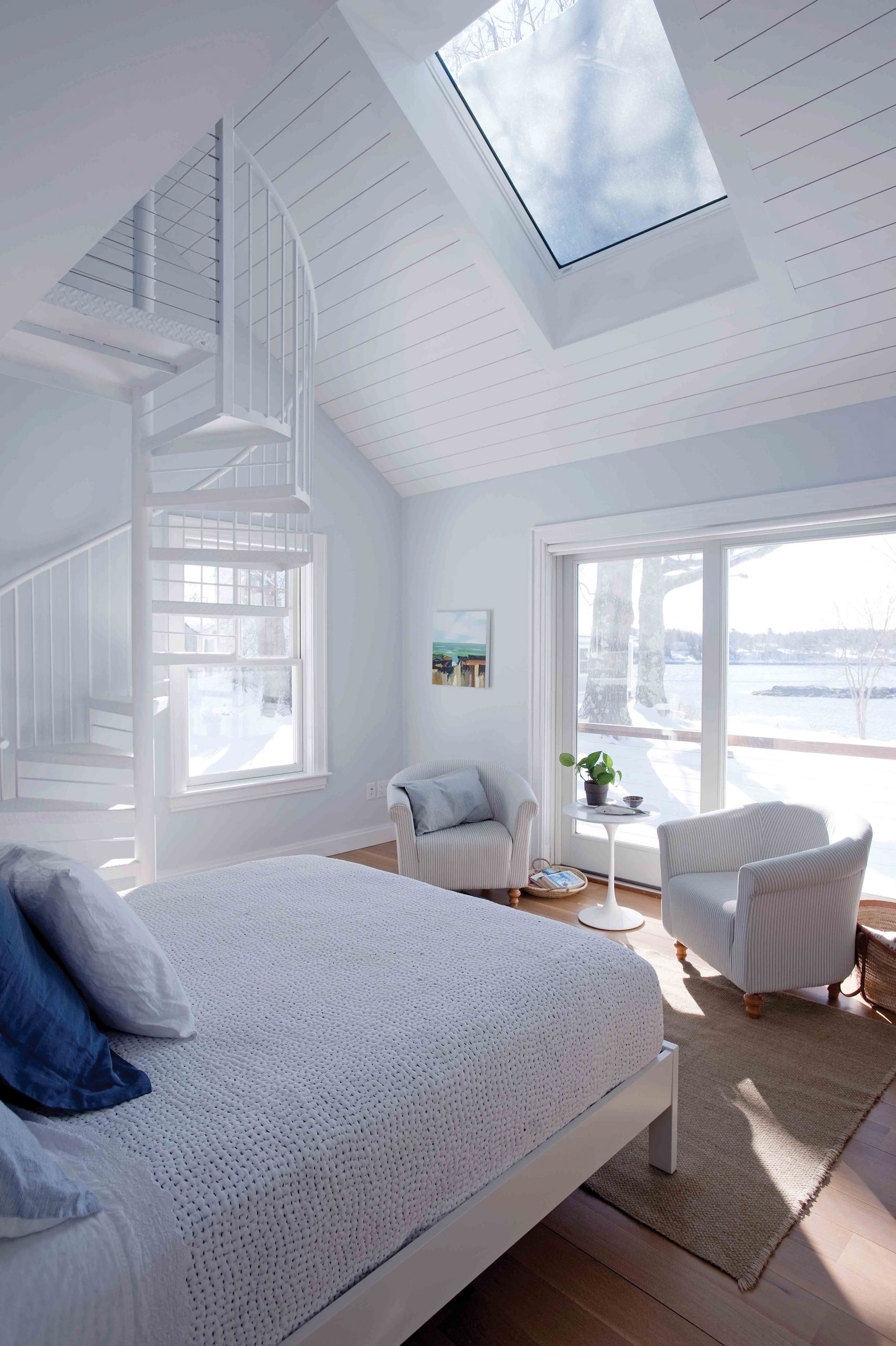 The new wing of the house features a skylight and a spiral staircase with extra sleeping space for kids in the lofted space. Lights are from House of Lights in Scarborough, and the window shades were purchased at Coastal Blinds and Shades in Scarborough. "Coastal Abstract" by William Crosby hangs in the corner. 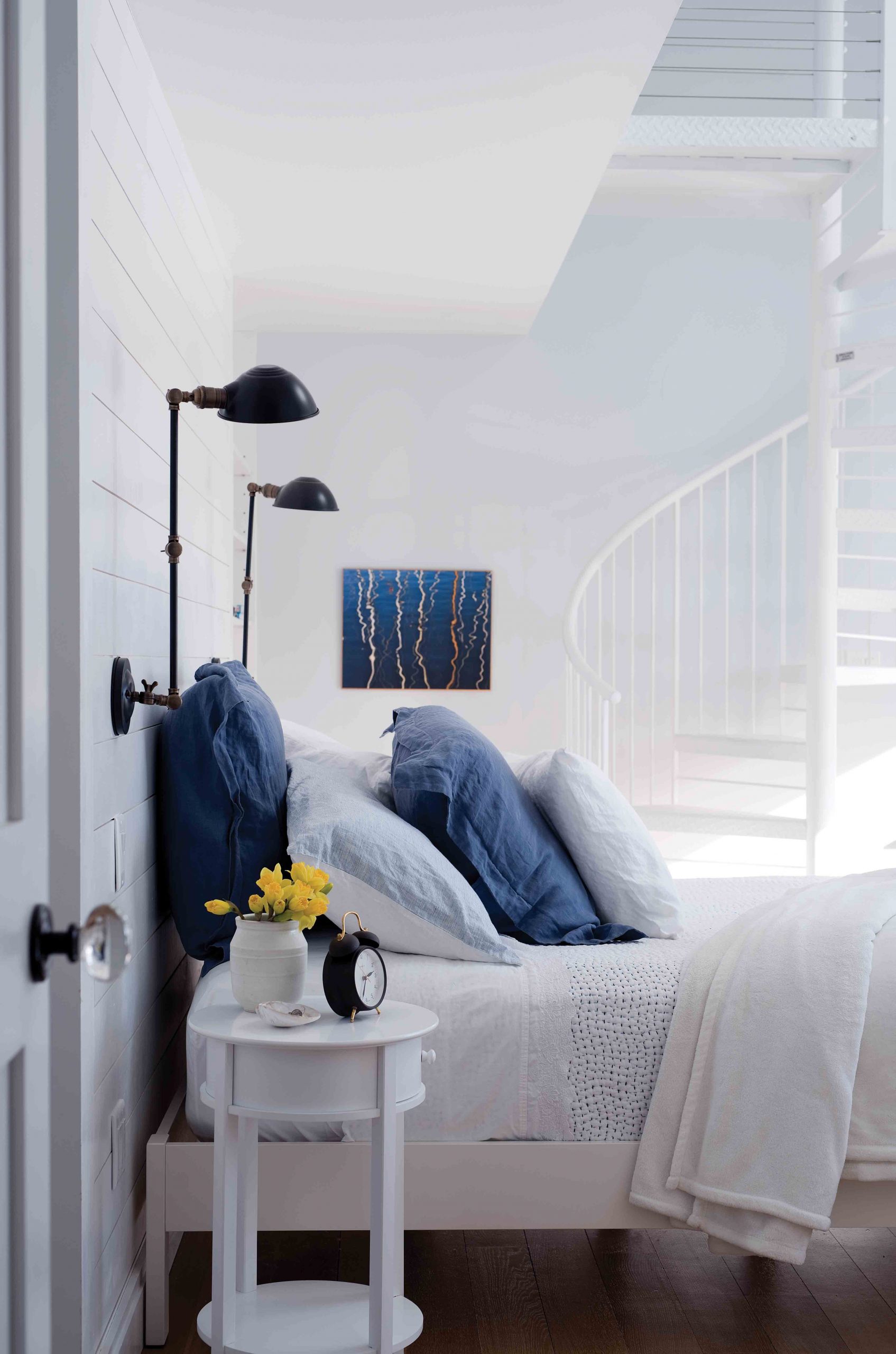 Anne sourced textiles from all over Maine, including this blue and white John Robshaw pick stitch quilt purchased at K Colette in Portland. She found the bedside lights at Olde Brick Lighting in Pennsylvania. 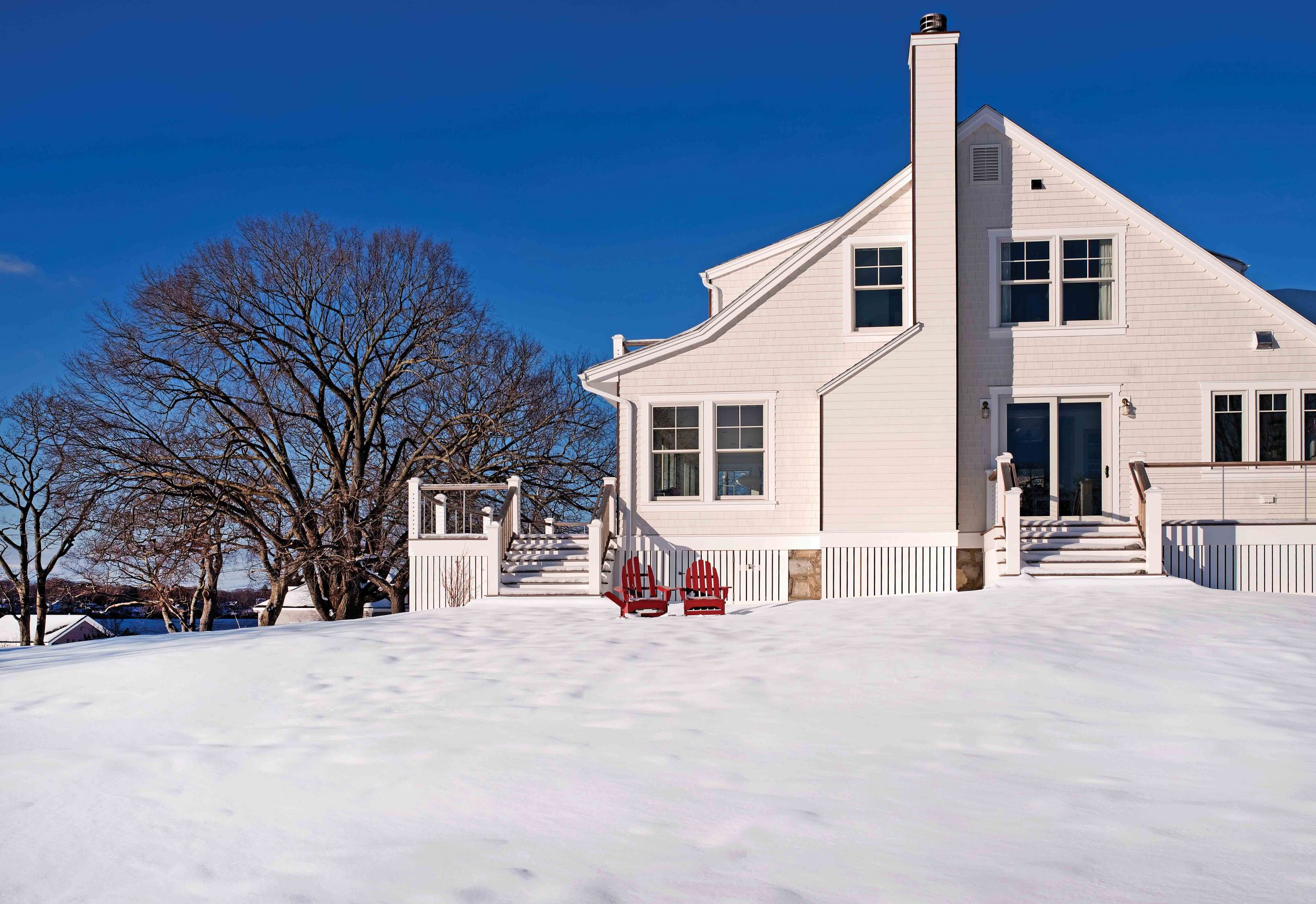 “If you add on too much, it becomes a mega-cottage, and that’s not what this is, or what they wanted,” says architect Jim Greenwell. “It’s not a good look or feel for Peaks, so I designed the addition to look like an annex”. 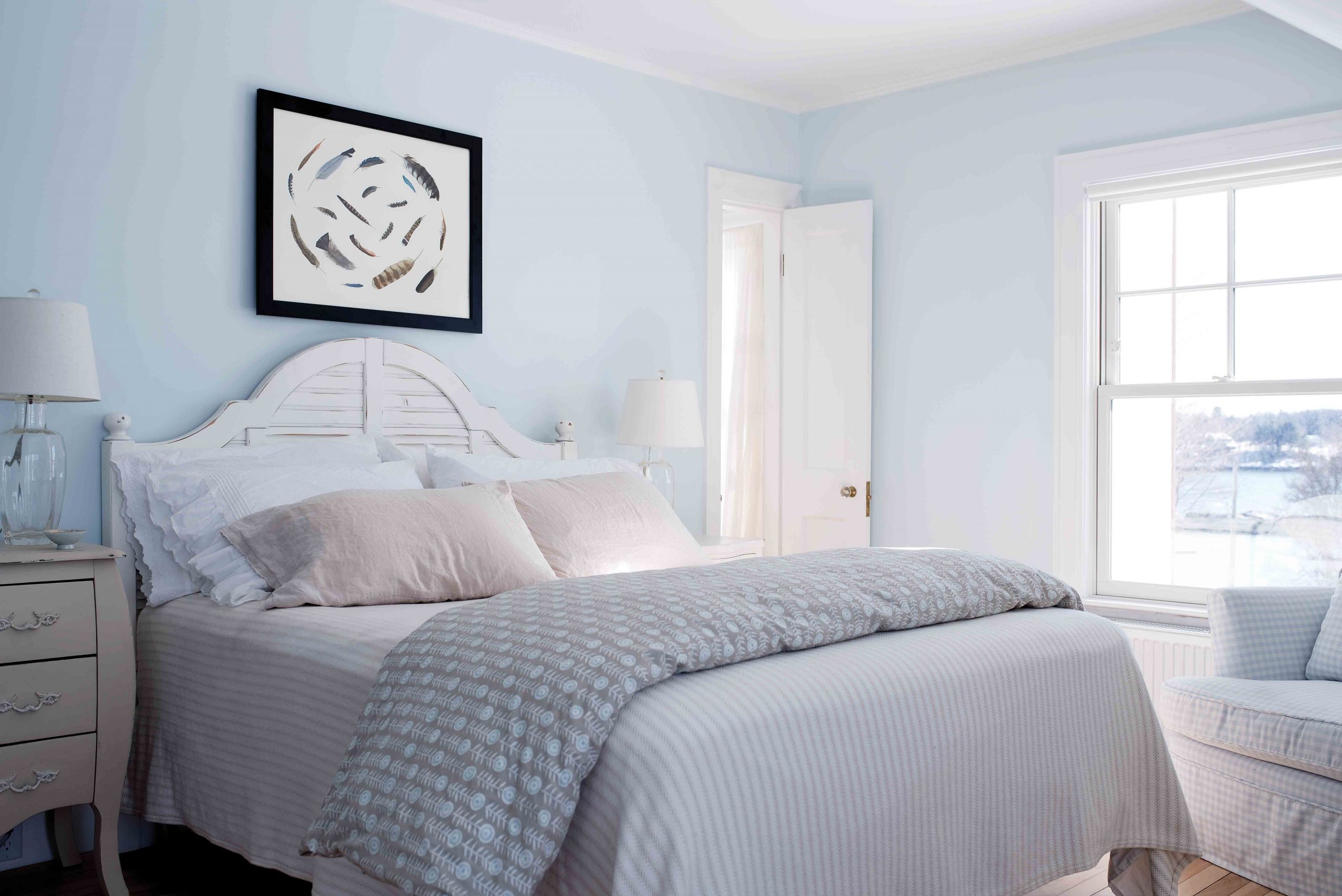 Upstairs, Anne continues the blue and white color scheme with linens from L.L.Bean and Maine Woolens. "Migratory Bird Treaty" by Missy Dunaway hangs over the bed. 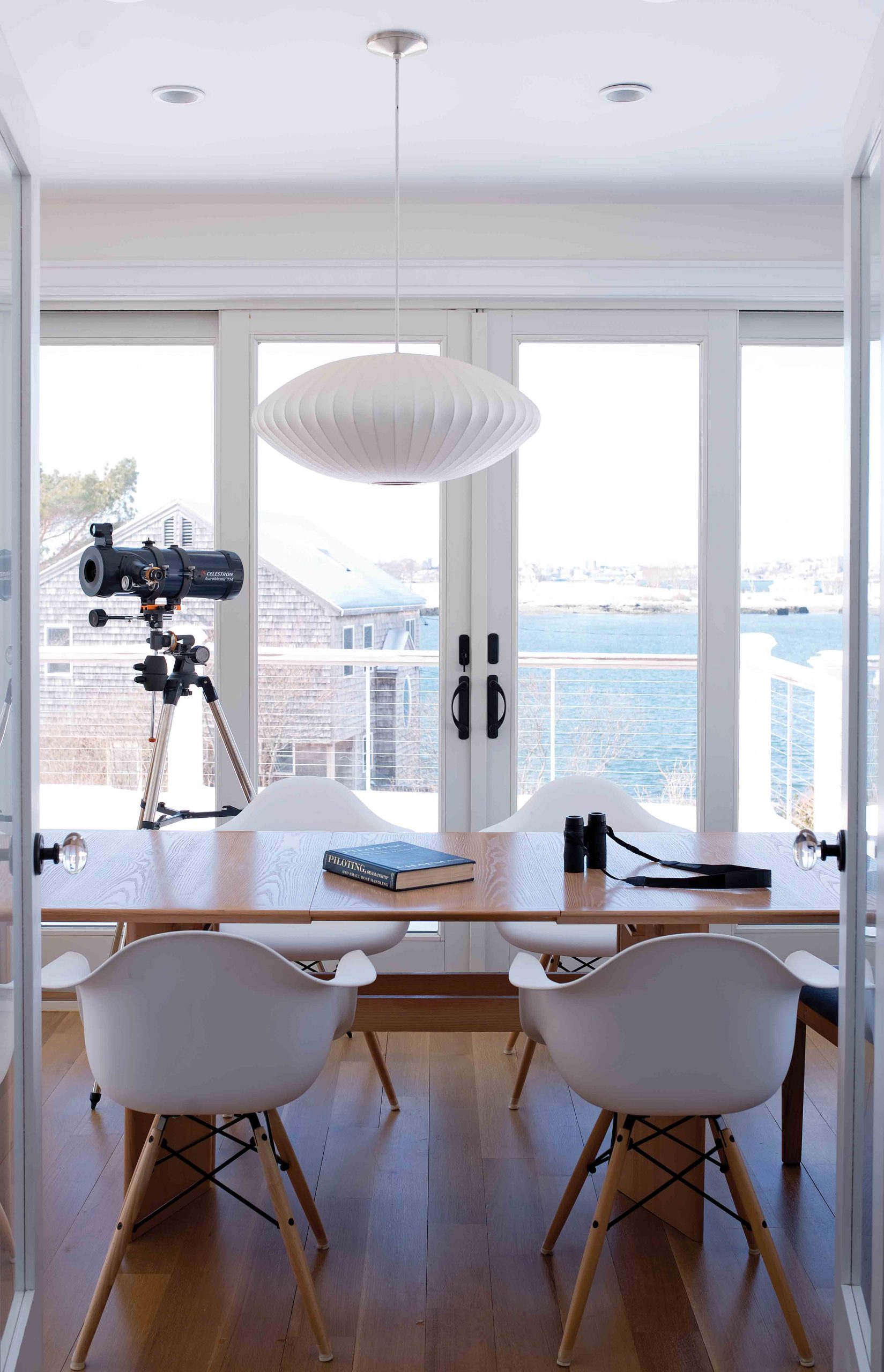 The midcentury modern dining table belonged to Anne’s brother-in-law Buz, who died unexpectedly several years ago. “He was here in this house right after we bought it,” Anne remembers. “He was in the ﬁnancial ﬁeld, but he always wanted to be an architect. He and I would sit here and dream about what could be done with this place. He would love what we did with it.” 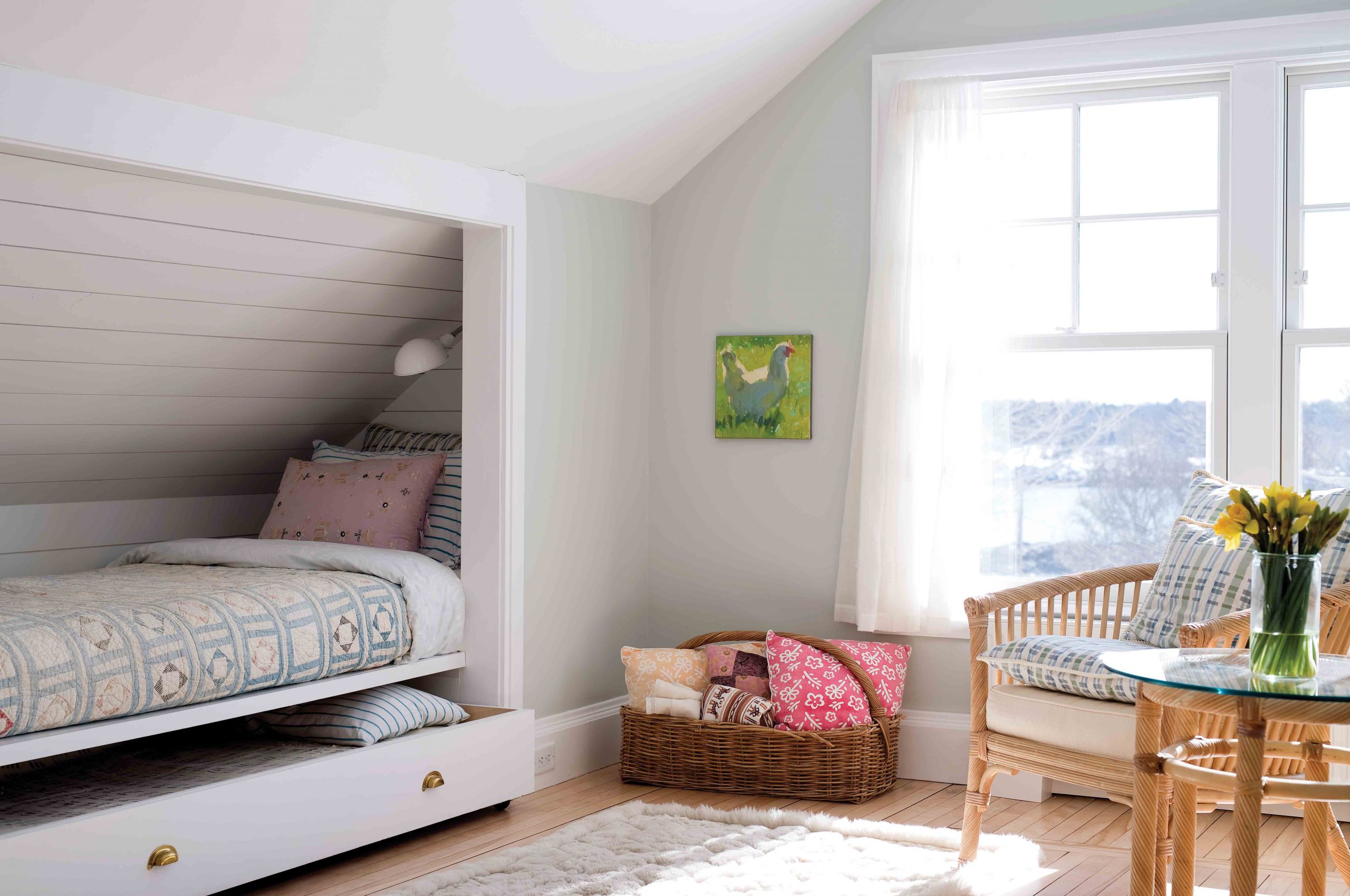 The cubby bed features a mattress custom made by Portland Mattress. 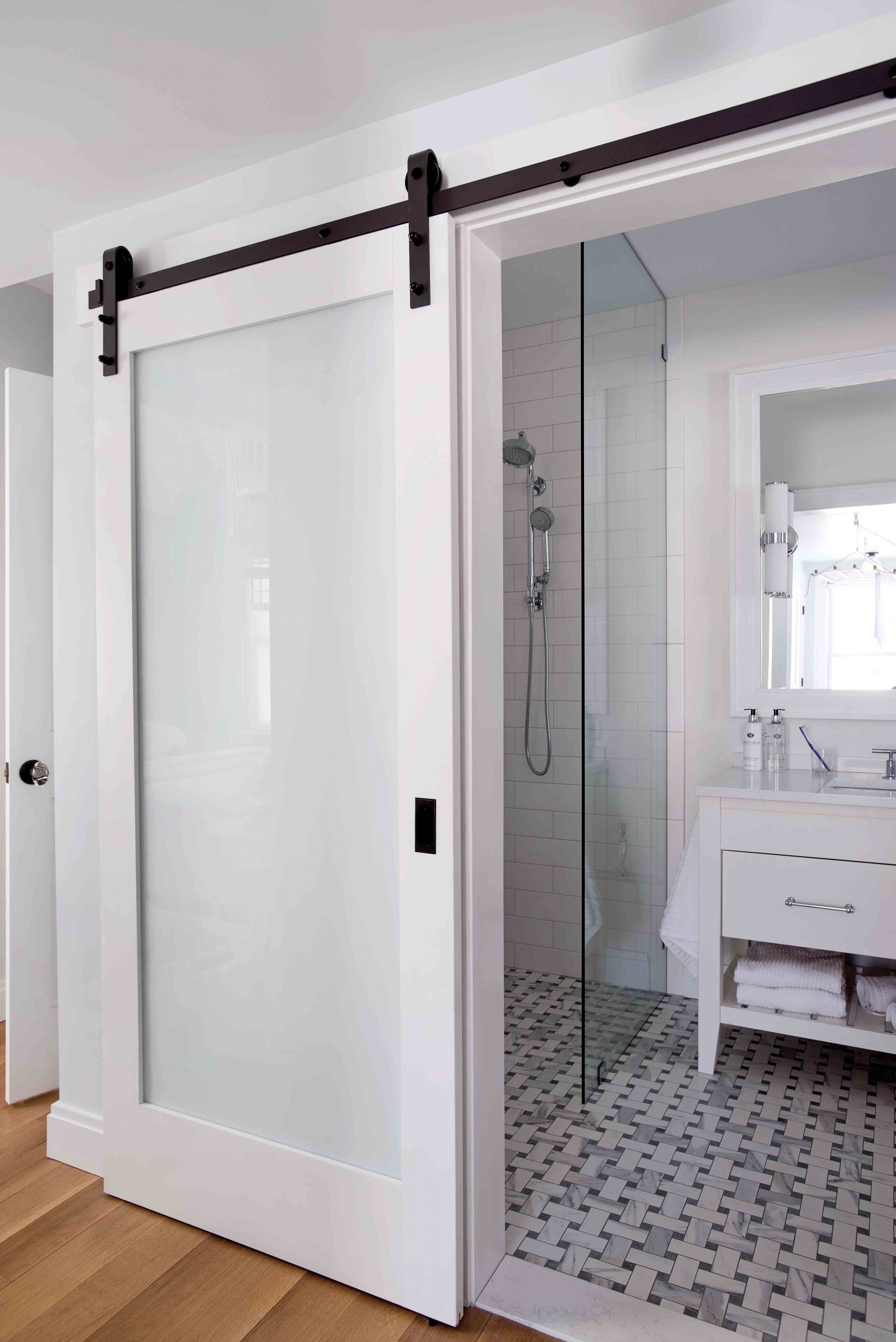 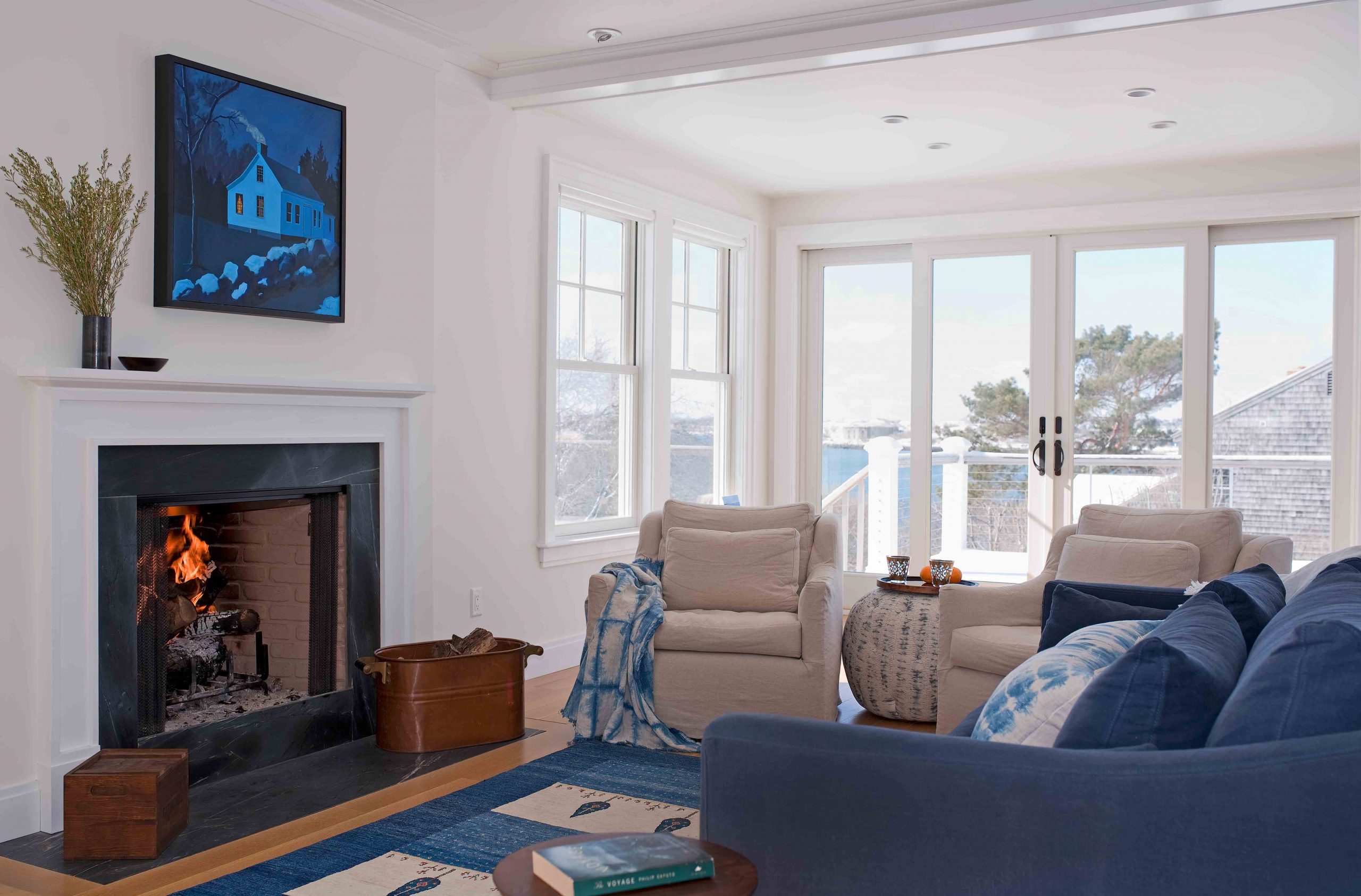 Above the mantel hangs a painting by Maine artist Douglas Houle. The sofa, chairs, and pouf were all made by Cisco Home in California, purchased through Young’s Furniture.

The house by the sea has a blue kitchen. This isn’t particularly unusual, but when you stand in Anne Belden’s blue-washed home on Peaks Island, it feels rather exceptional. It’s a deep embrace of blue, from the cobalt and azure painting over the living room mantelpiece to the turquoise glass sculpture displayed high on the built-in shelving to the soft, eggy blue of the custom cabinets. It’s blue in all its variations, all its melodic notes. Blue that moves from kitchen to living to dining room, blue that links it all together.

Anne and John Belden bought the house on Peaks Island after spending 14 years summering in the coastal community. Although they do not live here year-round—their house in Cape Elizabeth is the couple’s primary residence—they find themselves returning more and more frequently, particularly now that they’ve renovated their summer cottage into something slightly more spacious and sophisticated. “When I come here, it transports me back to my girlhood summer days in Michigan,” says Anne. “We would go out to the lake when school was over and come back on Labor Day. Part of the reason why I wanted to renovate this house was because I wanted to create something similar for my kids.” She calls this her “deepest heart’s desire.”

The Beldens spent five years vacationing in the three-bedroom, three-bathroom 1920s cottage before they began the renovation process in 2016. Their goals were fairly simple: Anne wanted to open the place up, add some extra bedrooms, increase capacity to accommodate an aging (and growing) family, and take better advantage of the lot’s wonderful ocean views. John added two more desires to the list. He wanted a full bathroom on the first floor (the original cottage just had a powder room downstairs) and a working fireplace in the living area. “One of the ideas we toyed with was building a guest cottage,” says architect Jim Greenwell. “But when we went through that scenario, we saw that it didn’t double- function for them enough.” It was important to the Beldens that their Peaks home be a place they could use well into their golden years, so they asked Greenwell to design an addition that would provide a first-floor bedroom with a handicap-accessible shower and a “nice, big dressing room,” says Greenwell. Above the new guest quarters/future owners’ suite, Greenwell added a loft area with overflow sleeping “for the grand-children, someday.”

Greenwell was aware that they were designing a place that would house “either two people or ten people,” depending on the weekend. When the Beldens have guests, they have lots of guests, but there’s plenty of time when it’s just the two of them. So the scale was kept relatively intimate. “Anne was careful with the budget,” Greenwell says. “She didn’t want to over improve the property. She was thinking about not just what’s happening now, but also what will be happening in the future.” The final consideration, one that struck home with Greenwell as a resident of Peaks Island himself, was ensuring that the addition would feel “aesthetically in line” with the surrounding structures. “If you add on too much, it becomes a mega-cottage, and that’s not what this is, or what they wanted,” he says. “It’s not a good look or feel for Peaks, so I designed the addition to look like an annex.” The gabled roof-line of the addition has the same angles as the main house, and builder Ben Trout of Trademark in South Portland worked to ensure that every element, inside and out, matched perfectly. “The biggest challenge of this build was in removing the west side of the house on the third floor and making it look seamless,” Trout says. “There was a ceiling transition we couldn’t change, but we matched the floor heights and used the flooring to connect the new areas.” He also notes that Greenwell designed clever coffers on the ceiling that were “laid out in such a way that it minimized the height change.” He adds, “I really like Jim. He’s good to work with.”

While the style of the exterior stayed largely true to the original house, the interior look got a major upgrade. Anne wanted to knock down the walls and open up the space. “We both have very small families,” she explains, “so our friends are very important to us. We love to entertain, and to nourish those relationships.” An avid cook, Anne wanted to be able to work in the kitchen and socialize at the same time. While the bedrooms upstairs were largely left as-is (save for some clever new built-ins), the first floor was entirely reconfigured to maximize ocean views and allow easy conversational flow among the kitchen (located at the back, next to the addition, with southern views of Cushing Island), the living room (in the middle of the house), and the dining area (which faces westward toward Portland and opens onto a roomy deck). When it’s just Anne and John, they will use the airy new suite, which has cathedral ceilings and a spiral staircase that leads to the second-story sleeping loft. “Sometimes, we’ll switch it up and have our guests stay there,” she says. “We feel like it’s this really cool and new private room. We get to experience both parts of the house that way.”

The rooms upstairs are cheery, light, and homey, but the downstairs is where Anne’s style shines most brightly. Both Trout and Greenwell agree that Anne was a “very interesting person to work with,” as Greenwell says. “She knew what she liked about the house, what she didn’t like, and what she wanted to get out of the renovation process.” Anne has a background as a textile artist, which has given her keen appreciation for handcrafted items and the labor that goes into them. Both men say it was a “true collaboration” among the builder, homeowners, and architect. But when it came to the fixtures, finishes, and decor, everyone agreed that Anne sat in the driver’s seat. For months she scoured websites like Etsy and Houzz looking for unique items such as urchin-shaped cabinet pulls made from white clay and egg-shaped glass doorknobs. Although she chose a variety of different knobs, pulls, and latches, they don’t look chaotic or even eclectic. They’re unified by the smart color scheme of slate blues and bright cobalts, of the indigo textiles and hand-woven rugs.

“I’ve always loved blue,” Anne admits. “And it’s right for the island. It was almost something I had to do, bring in blue and white.” Above the mantel hangs a striking painting of a nighttime scene by Maine artist Douglas Houle. Anne spotted the painting at Arabica Coffee House in Portland months before they finished the restoration process, and when time came to decorate above the mantel, she remembered that blue, that yellow. She called up the owner of Arabica and tracked down the piece, which fortunately hadn’t sold. “When I finally got it, after having thought about it for all those months, I was a little afraid to open it up,” she says. “But I did, and I still loved it. And so did my husband.”

While Anne’s taste largely shapes the aesthetics of the Peaks cottage, you can also see the presence of her family, the influence of the Beldens’ loved ones. Above the mantel sit three sea stones that her adult son plucked from the shore and placed there. “I want them to be there when I come home for Christmas,” he told his mother. “I want part of me in the house, too.” Nearby, looking out toward the sea, a light-and-long dining room table sits surrounded by chairs that were designed at Cranbrook, where Anne went to school and learned to weave. “A lot of things in the house are connected to my time at Cranbrook,” she says, including the George Nelson Bubble Lamp that hangs in the dining area and the Shinola wall clock that can be found in the kitchen. “In this house, I wanted to bring together all these elements that were important to my life.” John’s brother died unexpectedly a few years ago, and Anne and John inherited his midcentury modern dining table. “He had just got it, and he loved it,” she says. “I thought that we needed a place of honor for Buz’s table, so that he’s always here.” She points out a painting in the living area, saying, “That’s where that picture came from, too.”

By bringing in elements from her family and friends, Anne hopes to create a space that will see a lot of use, a lot of visitors and guests and parties. “My kids love coming here,” she says. Someday, maybe they will have their own families, and maybe their kids will love coming here. For now, Anne and John have their friends and their college-aged children. A place like this, or like her Michigan home, Anne says, “can be a touchstone as you go through your whole life. You always have one place. Maine is now that. No matter where my kids go, they can come back here.”

Anne sourced textiles from all over Maine, including this blue and white John Robshaw pick stitch quilt purchased at K Colette in Portland. She found the bedside lights at Olde Brick Lighting in Pennsylvania.

The midcentury modern dining table belonged to Anne’s brother-in-law Buz, who died unexpectedly several years ago. “He was here in this house right after we bought it,” Anne remembers. “He was in the ﬁnancial ﬁeld, but he always wanted to be an architect. He and I would sit here and dream about what could be done with this place. He would love what we did with it.”