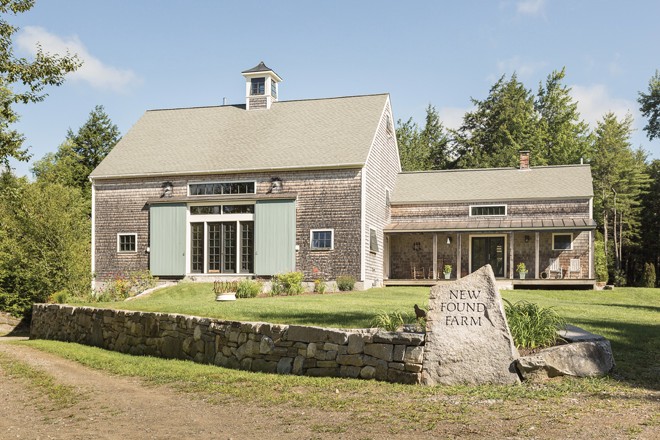 New Found Farm is the name of this new home designed to look like an old barn. Features include barn doors that work as shutters for glass doors, double transom windows, and cedar shingles treated with bleaching oil and left to weather to a gray patina. The home was built over the course of 20 years. In the first year of building, the homeowners lived in an RV on the property. In subsequent years, they occupied the wing of the house, which is now used for their dogs. 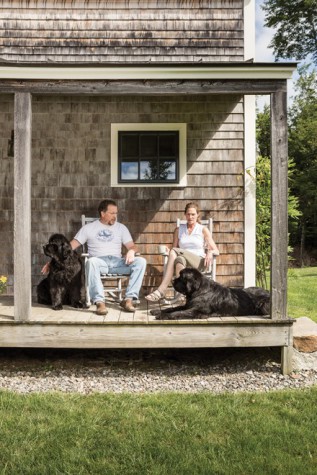 The homeowners with their prizewinning Newfoundland dogs. Behind them is the "dog wing" of the house, which has an oversized shower for washing the dogs. 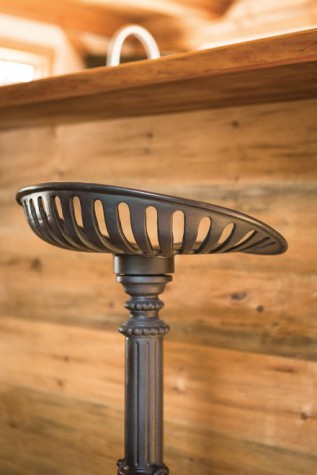 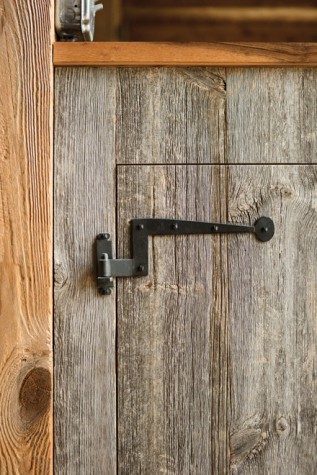 Blacksmith Joel Wentworth and his apprentice Gary Thorpe fashioned the hardware for the backside of the front door, including this hinge. 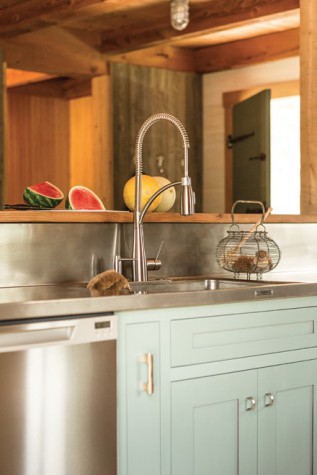 A Monel stainless-steel sink recycled from the home of one of the homeowners' clients. 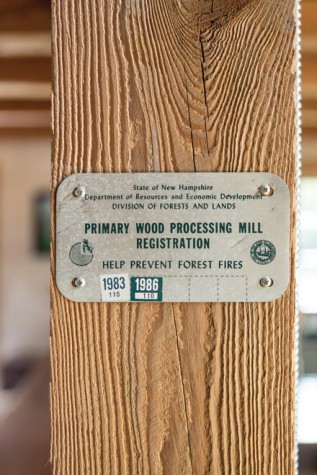 The metal plate is the registration for the sawmill (owned by the uncle of one of the homeowners) where the hemlock for the house was processed into timbers. 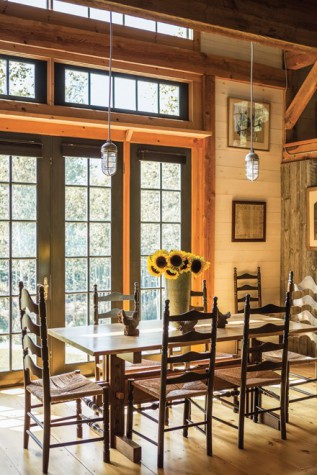 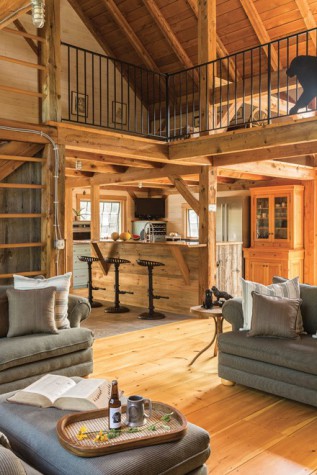 A view of the interior of the post-and-beam home with hemlock framing, kitchen, and master bedroom in the upstairs hayloft. The ladder to the left is made of hemlock and ash. The gray barn-board walls are from Carlisle Wide Plank Floors. The new kitchen hutch was built to look like a family heirloom. 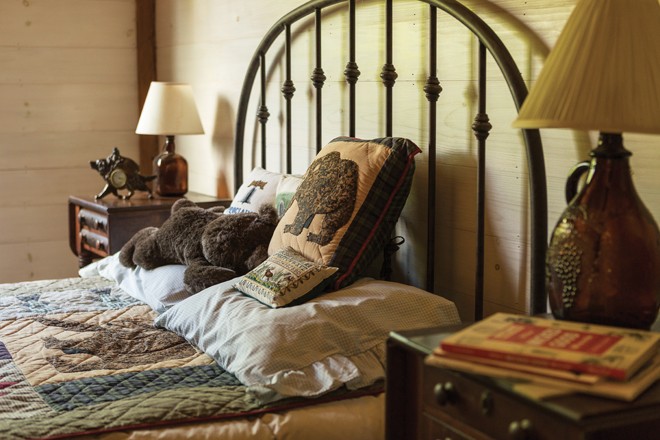 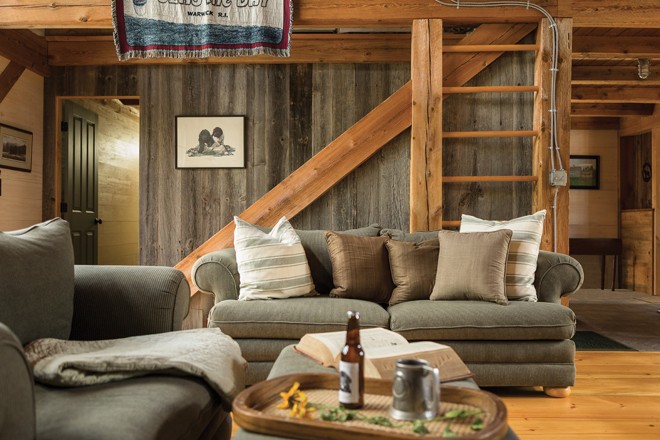 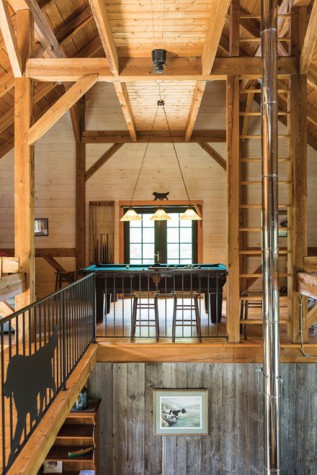 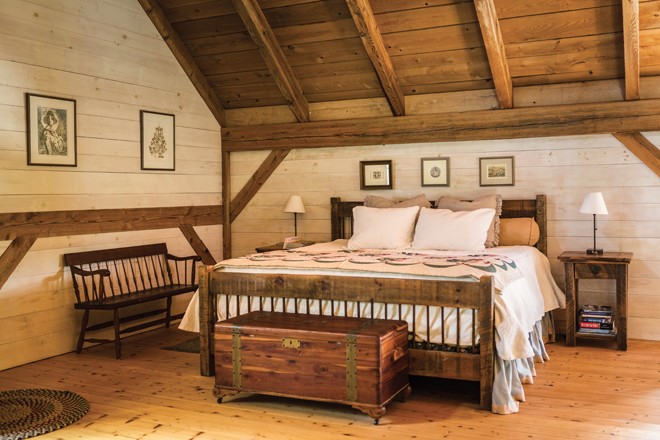 The master bedroom with family antiques and etchings, furniture made of timbers, and walls composed of boards that the homeowners whitewashed and installed themselves. 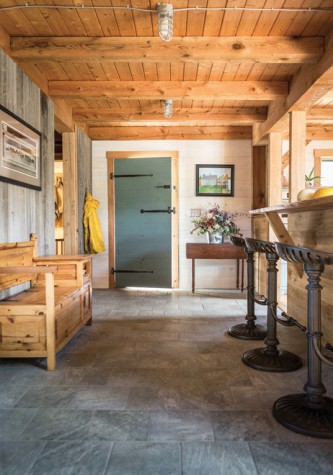 The front entry with the kitchen to the right and a pantry and entrance to the dog wing to the left. The floor is ceramic tile. The kitchen stools are meant to look like tractor seats, and the industrial light fixture is part of the Roughlyte Series from Crescent/Stonco. 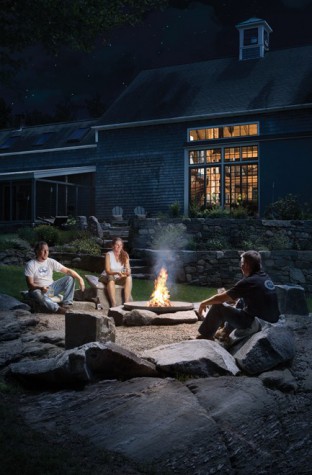 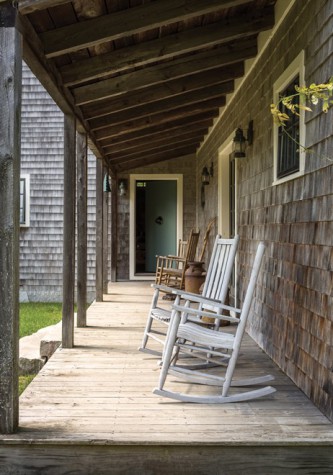 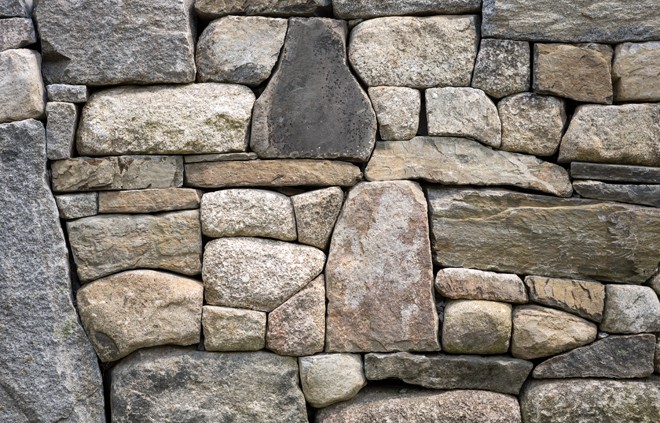 Stone work by Caleb Hall of Hall Landscaping in Warren. 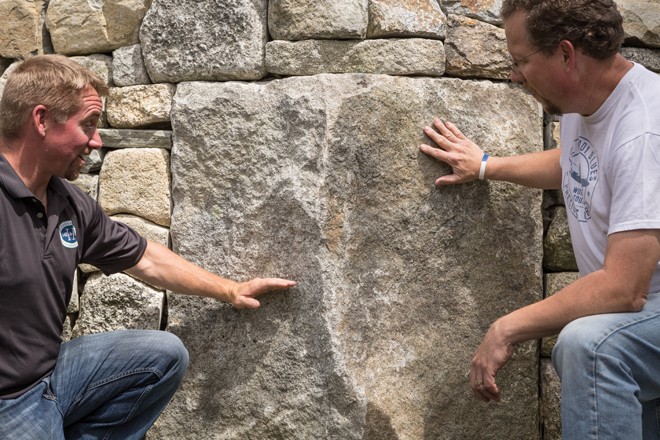 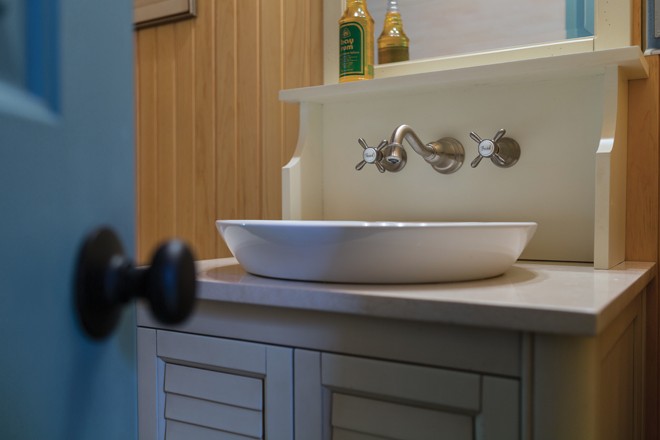 A shallow sink in the downstairs powder room is from F.W. Webb Company. 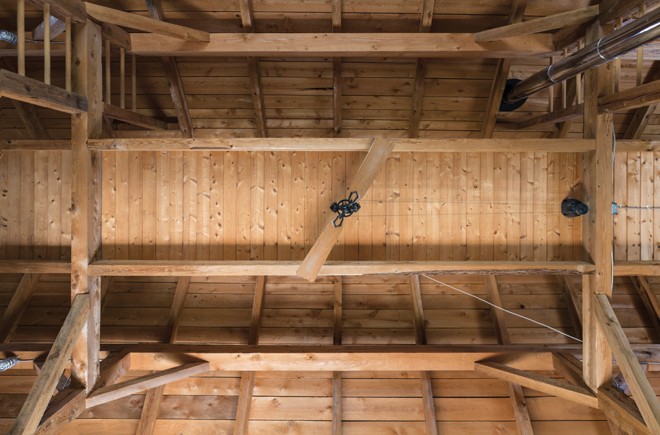 The underside of the catwalk with a fan by Lighting Concepts.

An architect-engineer couple build a home in an unlikely place

As a girl, I liked to imagine how I’d live in an unlikely place. It might be a clearing in the woods (I’d bury a metal box in the ground for food) or the upstairs bathroom (I’d put my sleeping bag in the tub, my cereal boxes on the shelf). Todd Bennett and Sue Mendleson’s home in Washington is the same kind of fantasy, writ large and improved by talent and ambition.  It’s a house in a barn, designed by architect Mendleson, wired by engineer Bennett, and built over the course of 20 years on land that Mendleson inherited from her family.

The idea of building a traditional barn/home came to the couple simply because they like barns. Mendleson had some familiarity with their construction, having worked at a post-and-beam company when first out of college. The couple consulted coffee-table books and took drives in the country, in order to figure out what features they’d most like. They settled on an English barn (a barn with sliding doors on the eave side rather than the gable end) with weathered shingles, a cupola, black window sashes, and a catwalk. (They saw the latter feature in a barn in Union.)

Decisions made, Bennett and Mendleson built as their pocketbooks allowed. One summer, they put in a road and utilities.  The next, they built the “dog wing,” the area of the house where Bennett and Mendleson lived during construction but which is now occupied primarily by their prizewinning Newfoundland dogs (one of whom took second place at Westminster in 2013). The barn itself was completed in several stages. Bennett’s uncle cut hemlock for the frame, but the wood sat for several years until Bennett and Mendleson were ready to build. Hemlock is often ideal for post-and-beam construction, but it grew hard during the wait, which made the timbers difficult to work with when the time came. Marc Lorraine of Lorraine Construction in Rockport built the dog wing and exterior shell, then Tim Fortune (previously of Lorraine) finished off the interior under the auspices of his own business, Tim Fortune Carpentry and Design in Camden. When the builders were done framing, they put a tree branch on the roof for good luck, a custom that is meant “to appease the god of the trees, since you are taking trees to build shelter,” says Fortune. (The practice is sometimes referred to as “topping out.”) “Everything was financially based,” says Mendleson of the building process. “We’d save money or refinance. I had the patience to wait to do what we wanted.”

And what she and her husband wanted was an open-plan post and beam, but not “open” in the way most people use that term, speaking of a house where the ground floor has a single dining room, living room, and kitchen space. The Bennett-Mendleson house is open because, with the exception of a guest room, office, and pantry, the barn consists of one space open vertically to the rafters. The ground floor has a living room, dining room, and kitchen. The second floor consists of two “haylofts” joined by a bridge. The master bedroom is in one loft; a game room with an antique pool table (made in the 1870s on Cape Cod) is in the other. A third level consists of a catwalk from which you can access the cupola.

“The design was always about what’s appropriate to a barn,” Mendleson says. She and her husband heat with a woodstove and in-floor radiant heat, because you wouldn’t see heating registers in a barn, but you might see a woodstove. The wiring for the lights is in exposed metal-case conduits, since a barn wouldn’t have electricity hidden in the walls. The office and guest room are set up in spaces that suggest horse stalls. Barn doors serve as shutters for large glass doors on either end of the living room.  Ladders made of hemlock and ash (hand-hewn by Fortune’s father) lead from the first floor to the second, from the second to the catwalk, and from the catwalk to the cupola’s interior. The stools that are drawn up to the kitchen’s bar countertop look like tractor seats. Everywhere, wood abounds: pine on the floors, reclaimed barn board for interior walls, and whitewashed pine for exterior walls. The door hardware, fashioned by blacksmith Joel Wentworth of Union and his apprentice, is based on a design from the neighboring family home. Because barns don’t traditionally have a plethora of windows, the majority of the light comes from the glass doors behind the barn doors. When the barn doors are closed, a transom window above the front entrance provides natural light and prevents the space from becoming too dark. Outside, a ramp, as if for farm equipment, leads to the barn door, which is sized to be big enough for a wagon full of hay.

Bennett and Mendleson picked furnishings that they thought might suit a barn: a bed and side tables made of timber in the master bedroom, an iron bedframe in the guest bedroom, and family heirlooms, which include a trunk, a bench, quilts, and etchings by artist Carol Lummus of Eliot, who is Mendleson’s maternal aunt. Other items have been collected, magpie-like, from here and there. The dining room chairs (which surround a live-edge table that Mendleson made while in architecture school) come from a former Boothbay inn. The kitchen sink came out of one of Mendleson’s clients’ homes in Greenville.

Bennett wanted the property to have a traditional rock wall as befits a barn’s surroundings, so he hired Caleb Hall of Hall Landscaping in Warren. What started as work for the front of the house—grading to repair the construction site and create a lawn bordered by a long, low wall—grew to include a stone ramp to the front door, retaining walls, a stone terrace, a fire pit, and a new foundation for the outdoor dog kennel. In keeping with the project’s overall goals, Hall created walls and foundations that “look like they might have been there 100 years ago,” he says. He used three types of rock: Blueberry Stone (which he sells to order and comes from blueberry barrens in Cherryfield), local granite, and local Heritage Valley. All of this is artfully laid with larger and intriguingly shaped rocks (one looks like a prosciutto) serving as focal points within the walls. Because there is a garage under the barn, Hall had to build a 10-foot retaining wall on one side of the house, a 6-foot wall on the other. Yet another wall had to be built to contain the soil for the terrace. The final design for the terrace and fire pit incorporates an existing stone ledge, as well as large pieces of stone that serve as seats. Hall also placed solid blocks of granite under the dog pen. Smith and May of West Rockport used St. George granite veneer for the visible part of the foundation. Now the granite and granite veneer give “the feel of an old farm as it wraps the house,” says Hall.

A typical barn might house a farm dog. Bennett and Mendleson have two Newfoundland dogs, named Lewis and Quincy, but the animals, with their tendency to shed and drool, don’t have access to the barn. They reside in the “dog wing,” which is a family room outfitted with a dog shower and kitchenette. Newfoundland dogs still have a presence, however, in the barn, as images of them are everywhere: on the bathroom tile, throws that hang over the hayloft railing, artwork, pillows, dishware, and more. Blacksmith Wentworth even incorporated the silhouette of a Newfoundland dog on the second-floor bridge’s railing.

There are, of course, a few items in the house that you would definitely not find in a barn: a kitchen, for example. But even here things were made to fit the aesthetic by eliminating upper cabinetry to keep the timber framing visible, building a hutch that looks like it could be a family heirloom, and using elm with a live edge for the bar countertop, an echo of the live-edge top on the dining room table. The kitchen was a collaborative effort with design input from kitchen designer Elaine Murdoch (who is a colleague of Mendleson’s at Knickerbocker Group in Boothbay and Portland) and Murdoch’s husband, Ray Menard of East Boothbay, who built the cabinets, bar top, and hutch.  Collaboration was significant throughout the project. Mendleson says, “Ray, Marc, Tim, Caleb, and almost everyone else involved offered far more than their sweat and materials. Now they’re all family, whether they like it or not.”

My girlhood fantasy abodes represented the whim of the moment, not a 20-year effort, but they still had names, “The Club House” being a particular favorite.  As for Bennett and Mendleson’s home, it is called “New Found Farm.” “It’s a pun on the dog breed,” Mendleson explains, but also apropos for other reasons:  “Because it’s a new ‘old’ farm. A new homestead.”