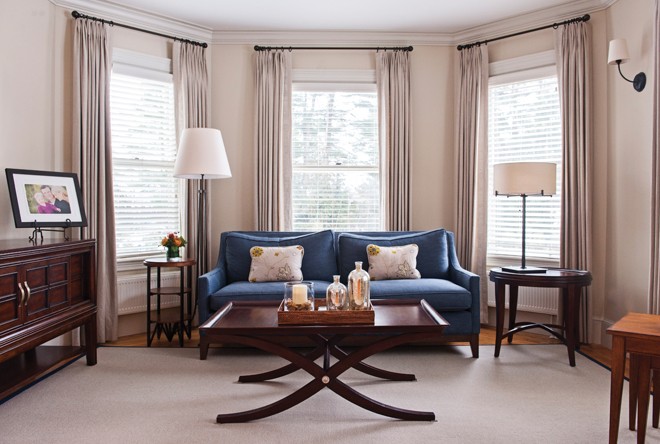 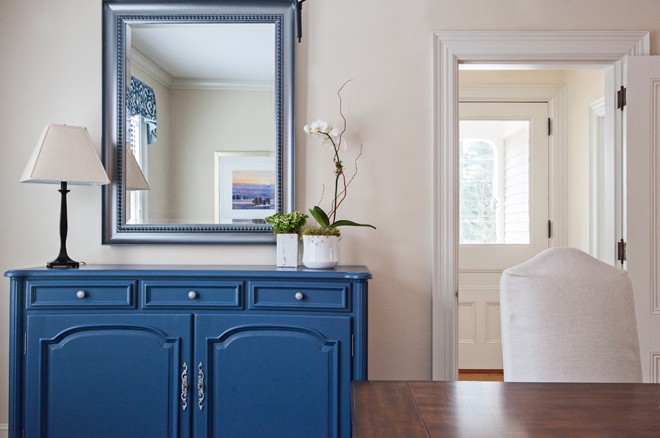 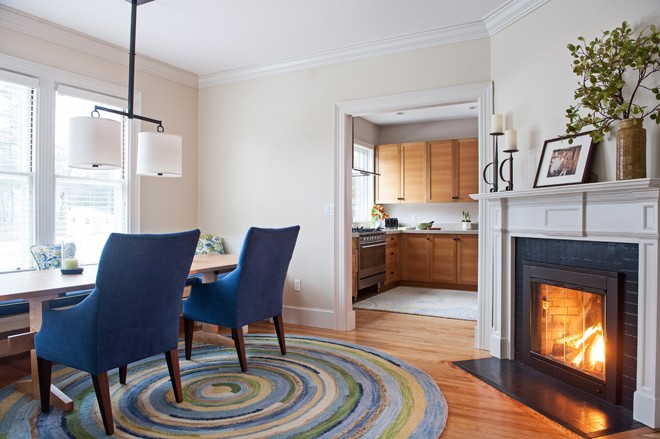 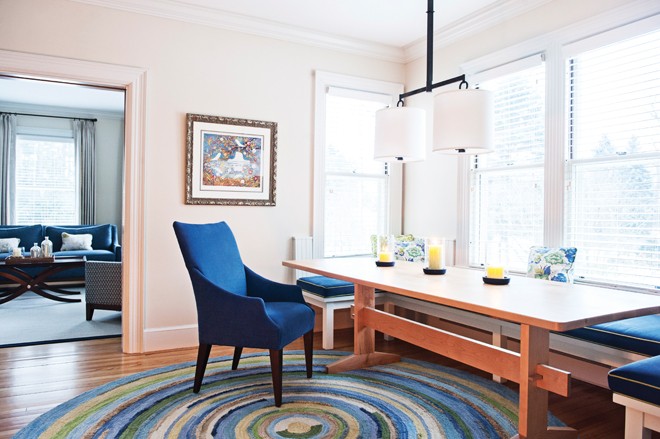 The informal dining area is a central hub around which the main rooms of the first floor connect (kitchen, formal dining room, and living room). The Hach family eats most of their meals together at this table, and their daughter does art projects on it, in front of the fire. 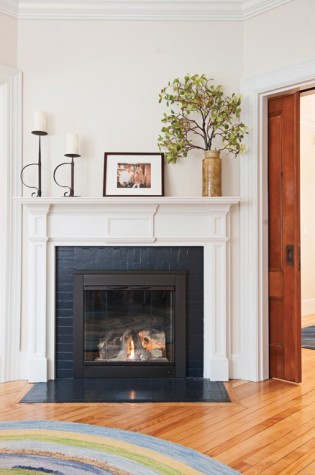 This fireplace is original to the house and was restored with a new damper and brick lining. Confirming a hunch by designer Brewster Buttfield, pocket doors were uncovered during the restoration. 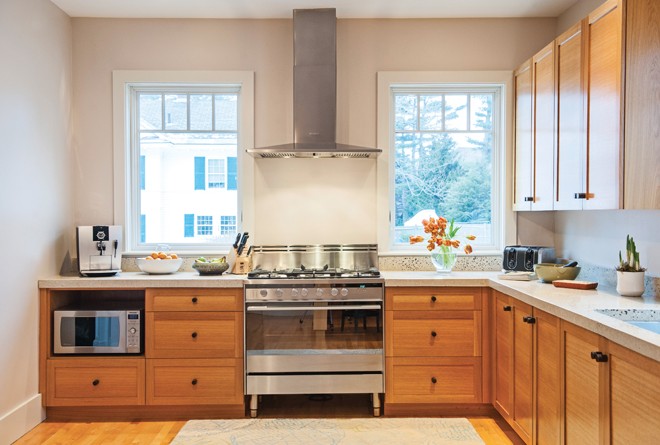 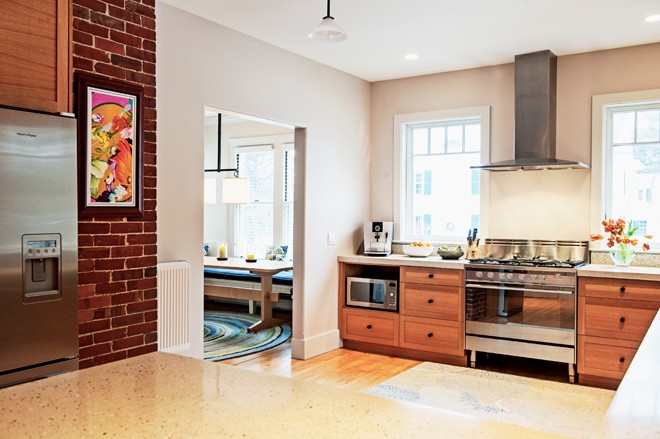 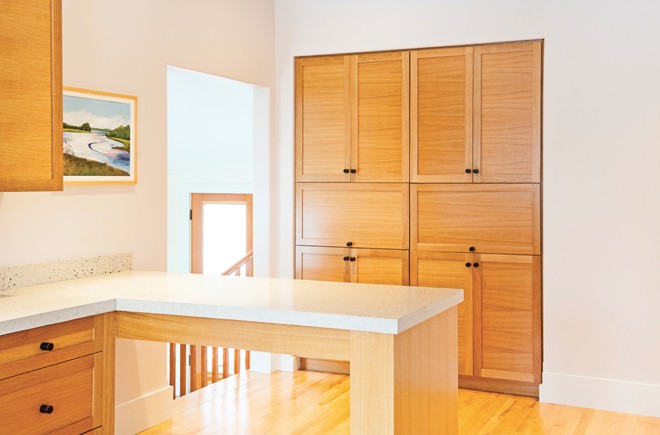 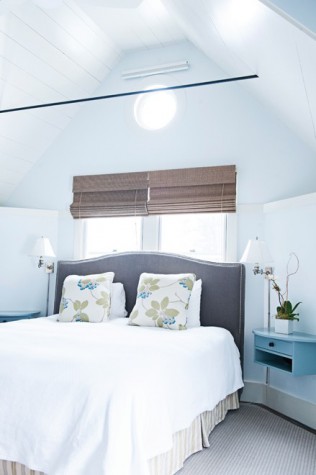 CornerStone Building and Restoration removed the original ceiling in the master bedroom and in its place created a shiplap-boarded cathedral ceiling that better highlights an original porthole window. Brett Johnson suggested the floating nightstands to save on space. 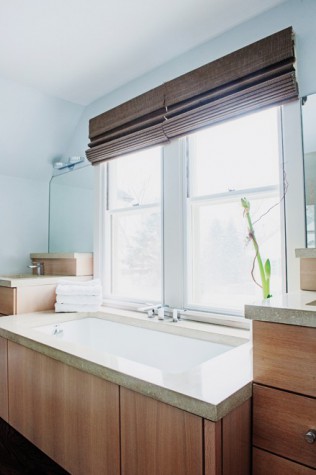 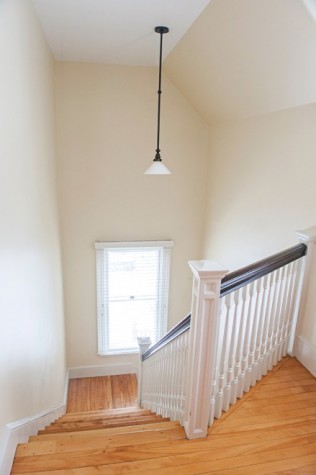 The original balusters and newels were left as found and received a classic paint finish that Johnson specified to fit with the timeless quality of the house. 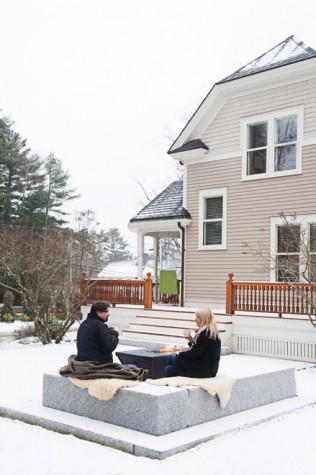 Outside, concrete seats surround a fire pit by landscape architecture firm Soren deNiord Design Studio. Coastal Landscape Construction installed the hardscape items, including the concrete blocks and patio. For plantings, Coastal Landscape created a screen of arborvitae along the front of the house to separate the yard from Foreside Road. They also planted rhododendrons, peonies, blueberry bushes, and winterberry bushes and installed a raised planting bed for a vegetable garden. 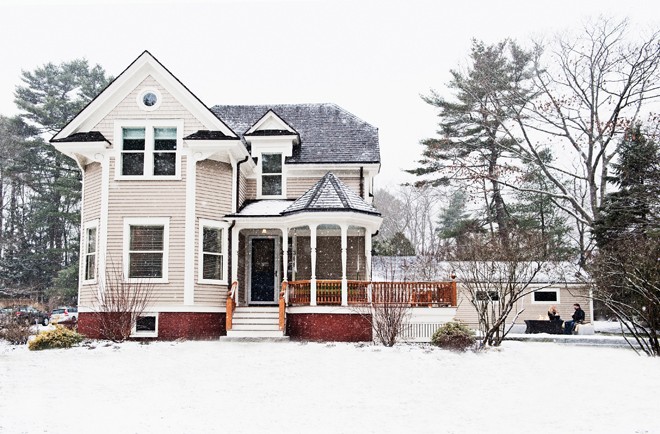 The restoration of this early-1900s Victorian home on the Falmouth Foreside was a team effort by CornerStone Building and Restoration, Prospect Design, and Maine Street Design Co., along with a long list of Maine craftspeople and artists who meticulously restored the house to its former splendor while updating it for modern living. 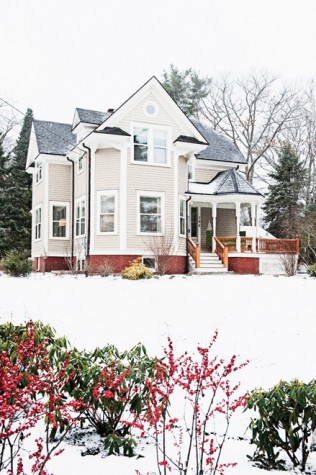 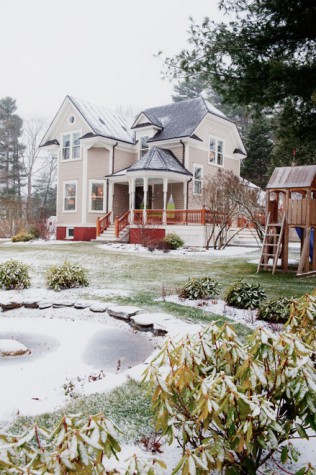 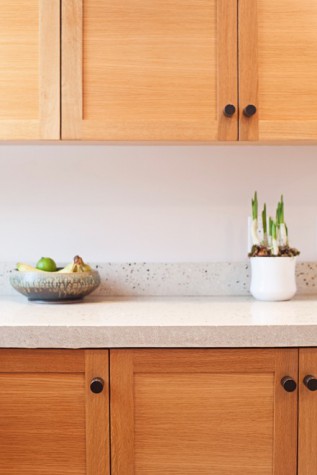 For the pragmatically minded, decisions are arrived at carefully, slowly, with a precise methodology. Options get weighed, pros and cons go head to head. For Sarah and Bryce Hach, the decision to uproot their family and move to Maine came to life in this way. It began on an Excel spreadsheet. Actually, it began even before that: at a Red Sox game on their anniversary. On that trip to Boston, they had wound up in Maine, a place they immediately loved, that stayed in the back of their minds long after they had returned home to Colorado. Their careers and education had taken them—both separately and together—all over the place: London, Minneapolis, Wisconsin, Pittsburgh, St. Louis, Florida, Mississippi. Their next move, however, would need to consider a third person: their four-year-old daughter. “We felt like this was our door of opportunity to really think intentionally about where we would like to live next as a family,” says Bryce.

And so they got to work on their spreadsheet. A list of characteristics they were looking for in a town took shape: Near the ocean. Near the mountains. A city with culture that isn’t a huge metropolis. Access to outdoors/nature. Great schools. They visited places that fit these criteria—everywhere from Chicago to Denver to Maine. Then one day, in a sandwich shop in Falmouth, they found themselves at the receiving end of a good tip: there was an old Victorian that had recently been restored for sale on the Foreside. When they pulled up, Sarah immediately recognized the house from an Internet search a few months prior. They peeked through the windows and called the name on the sign: Tom Landry of Benchmark Real Estate and CornerStone Building and Restoration in Portland.

It turned out that Sarah and Bryce’s rigorous planning was no match for spontaneity. They loved the house, so they purchased it a few weeks later based on that one happenstance visit. “We like older homes,” says Sarah, “but not the idea of having to do major maintenance. We were looking for a home that was close to turnkey but that could be slightly modified to fit our needs, and this was exactly that.”

Not only was the house a good match for their needs, so too was the team. Landry became Sarah and Bryce’s first friend in Maine, followed close behind by architectural designer Brewster Buttfield of Prospect Design and interior designer Brett Johnson of Maine Street Design Co. Later, when it came time to do additional work on the home, it made sense that the people who worked on bringing the historic house back to life, who knew its ins and outs, would be the same people the Hachs would hire to create living space in the basement for family visiting from Colorado and to outfit the home in furniture that suits the space.

The 1900s Queen Anne was filled with details that captured Sarah and Bryce’s attention—the same details that made Landry say “yes” when approached by the former homeowners to purchase and restore the house to its original grandeur. Among them were the striking rooflines, the front porch turret, and the beautiful interior woodwork. “Immediately the team and I fell in love with this home and its unique architecture, the lovely period details, coastal location, and attractive setting,” says Landry.

With interiors stuck in the 1950s, the house was in need of major upgrades. The team embarked on a careful restoration—blending in amenities of modern living while preserving as many historic features as possible. On the inside this meant retaining the original woodwork, doors, hardware, flooring, plaster, wavy-glass windows, wood-burning fireplace, and pocket doors. On the exterior, it meant installing new copper caps above the window and door trim, a new roof, and new downspouts. The original fir gutters were restored, and the chimney and foundation were repaired and repointed. The front/side porch—“a work of art,” according to Landry—was crafted to be an exact replica of the former porch. The handrail, baluster, and newels are mahogany, and decking boards are fir and secured without face nailing. The original front door was retained and restored, and new Simpson fir doors were installed in the rear. The house’s original wavy glass and wood windows with original hardware were restored, reglazed, and reinstalled, and all clapboards were removed and replaced with clear cedar siding. All of this required a thorough team of craftspeople, almost all of which are from Maine.

While the team worked to meticulously preserve and restore the home’s period details, the floor plan required a total revamp for today’s living. One of the biggest architectural challenges, according to Buttfield, was what to do with the house’s very long garage, which had been used for wooden dinghy construction by the former homeowner. “We didn’t want to do a big modern addition off the side, because we worried the house would lose some of its original charm. We wanted to keep it all about the beautiful lines of this gracious old house,” says Buttfield. The solution was to break up the garage into a two-car garage and a spacious great room with cathedral ceilings and radiant heating in the concrete floor.

In any historic home, age tends to show most in kitchens and baths, so those spaces were fully gutted. The new open kitchen features traditional materials in a classic yet contemporary design: rift-sawn white oak cabinetry by Westbrook-based R.G. Eaton Woodworks and concrete countertops by Jon Meade Design. A room with a fireplace between the kitchen and formal dining room is a functional extension of the kitchen with a table for meals when it’s just the three of them and for art projects in front of the fire. The first floor’s formal spaces—a dining room and living room—feature maple floors and repaired plaster, crown moulding, and new lighting. One of the primary architectural goals for the space, according to Buttfield, was opening it up. “We love how open this first level is,” says Bryce, “and the fact that you can look from the back of the house to the front in one straight line. Our daughter loves to run back and forth—the house has some real five-year-old utility,” he adds with a laugh.

Upstairs, a master suite features stained floors and a shiplap-boarded cathedral ceiling and original porthole window. Both Sarah and Bryce’s bedroom and their daughter’s were masterfully configured around some tricky rooflines, and Johnson of Maine Street Design Co. was integral to selecting and, in some cases, custom-crafting furniture that would fit the home’s uniquely shaped spaces. “Much of our furniture was from an Arts and Crafts bungalow-style house,” says Sarah, “so Brett helped repurpose it with lighter colors and tied it all together.”

It’s hard not to invoke Goldilocks when talking about the house’s size. At 2,600-square-feet, it’s what Landry calls “right-sized” for today’s living. “I think over the last five years or so we’ve seen a real shift in conscientiousness, an intentionality toward living—it’s not just about where we’re going to live, but how big we’re going to live,” he says. Bryce and Sarah are examples of such conscientious homeowners who don’t want a house filled with rooms they don’t use. “I think we were able to look at the landscape of this home and construct our lives around it so that we really do utilize almost every square foot,” says Bryce.

Not too big, not too small. Not too old, not too new. A house that’s just right.