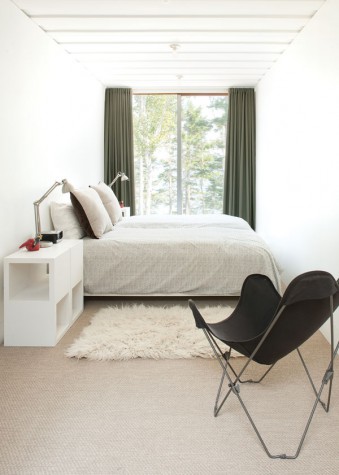 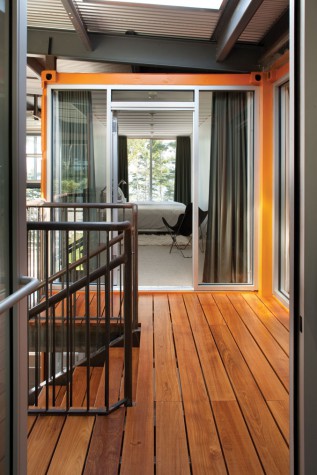 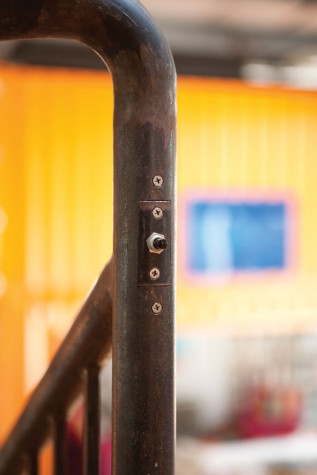 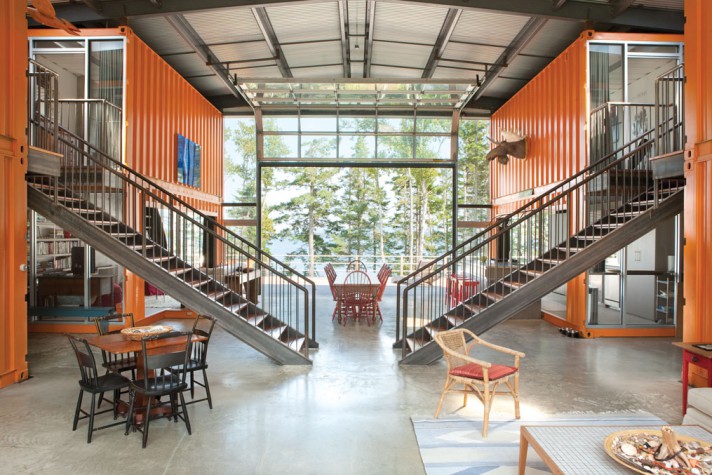 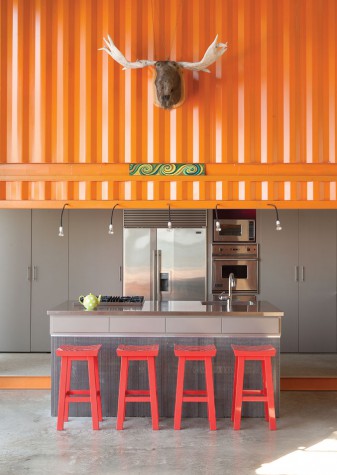 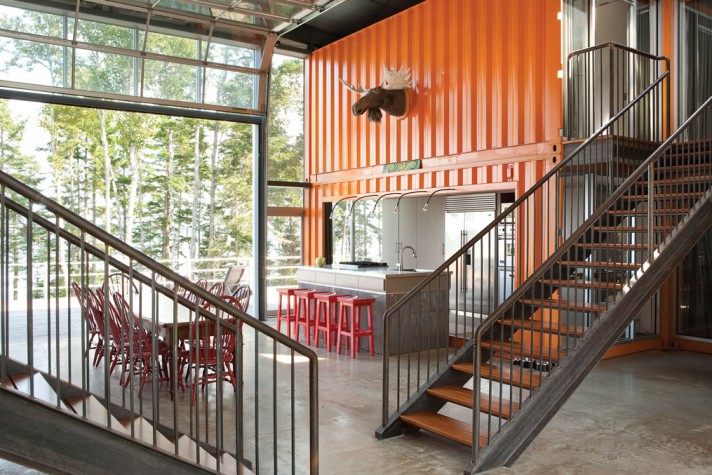 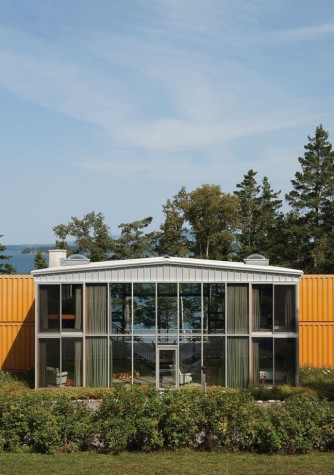 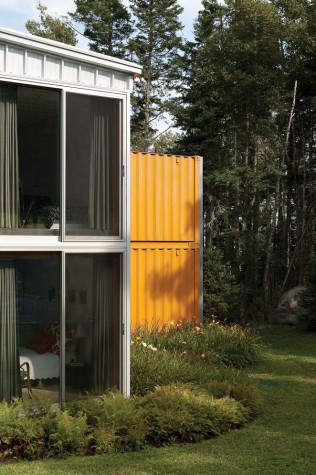 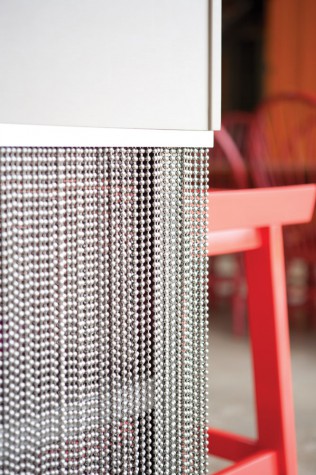 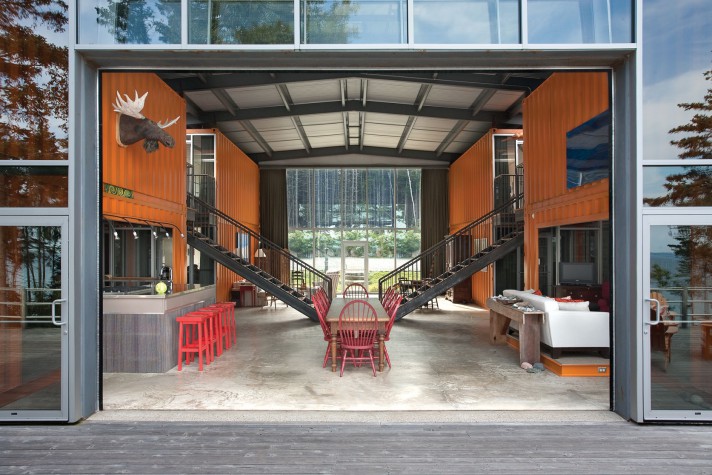 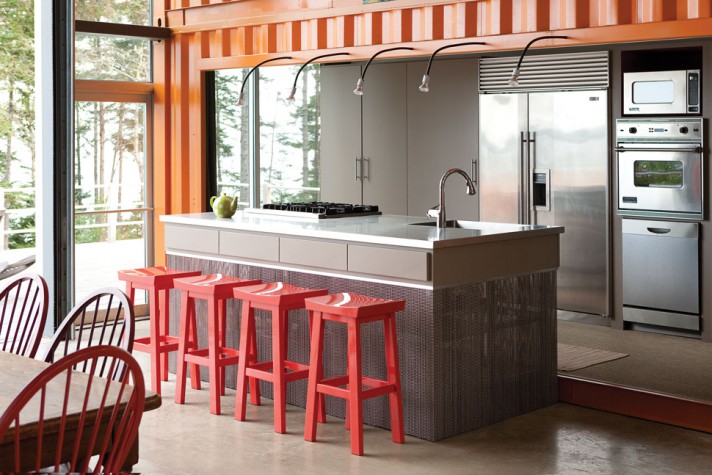 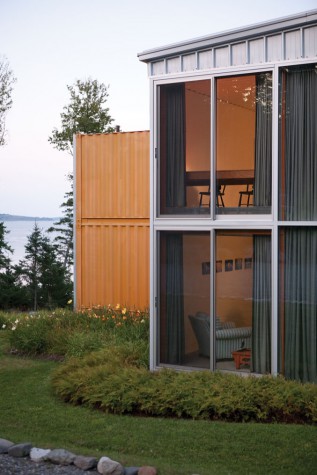 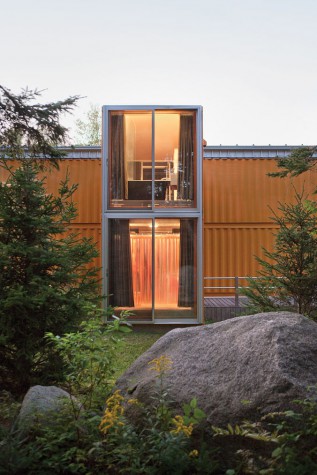 From cargo ship to container house

In a region filled with green-shuttered, white-clapboarded, quintessential New England homes, it’s a stunning sight to come upon a life-vest orange, corrugated-metal home with expansive glass walls. Made from twelve industrial shipping containers, the home is anything but traditional or expected, and yet the Adriance home somehow seems entirely in harmony with the rugged, rocky coastline. The home is built from twelve containers divided into two groups of six. The containers are stacked on top of each other like Legos, and the two container sections are connected by a glass-walled, open-concept central room with a ceiling that soars to 25 feet.

How did this example of cutting-edge architecture end up in a quaint town in Maine? Transfixed by the summers she spent in Blue Hill Bay during her youth, Anne Adriance wanted to continue the tradition as an adult, bringing her husband, Matthew, and their two sons into the fold. Adriance admitted that, when they initially purchased the secluded, 10-acre plot, she didn’t have a strong sense of what she wanted in a home, design-wise. Her only thought was that it would probably make sense to work with a local architect, someone who would have ready access to the site. But Adriance soon found herself consulting with her friend Adam Kalkin, an architect from New Jersey—where, ironically, the Adriances live in a classical Victorian home. Ultimately, it was Adriance and Kalkin’s creative compatibility that led to their partnership on the project.

Kalkin, a Vassar College graduate, is known for pushing the envelope in both art and design. He first became fascinated with containers in the 1990s while using them in his artwork. He has since made a name for himself in the emerging field of “cargotecture.” Kalkin completed the Collector’s House, another container structure, for the Shelburne Museum during the latter planning stages of the Adriance home, and the two structures share several similarities, including the bold use of vibrant orange transoceanic shipping containers. Renowned interior designer Albert Hadley also worked on both projects.

Working with the steel shipping containers requires skills more often found in commercial construction, so Kalkin contracted Sheridan Corporation, one of Maine’s largest commercial builders, to install and weld the metal containers. Then the Brooklin-based construction firm Prin A. Allen & Sons, Inc., completed the finish work. Sheridan’s foreman, Doug Cutchin, now retired after more than forty years, said that, looking back, the Adriance home was “the frosting on the cake—marrying a modern, utilitarian design to an old Downeast setting.”

Surry Gardens, another local company, created a soothing Japanese garden in the rocky soil, as well as a striking wall of Rosa rugosa (beach roses) near the driveway. In front of the house, they also planted an array of—you guessed it—orange lilies of multiple hues that bloom from spring to fall.

The outdoors is integral to Kalkin’s architectural vision for the home. One of the most magnificent features of the house is an enormous glass-paned garage door, which can be opened onto a back deck where glimpses of the ocean can be seen through the surrounding fir trees. The garage door remains open for most of summer, even during rainstorms, and the subtle sound of raindrops on the metal roof has become one of Adriance’s favorite aspects of living in the container home. Flowing, floor-to-ceiling microfiber drapes gently frame the glass ends of the house, simultaneously counterbalancing the rigid metal architecture and acting as a raincoat when drawn.

Early on, Adriance, herself an artist whose delicate watercolors adorn the walls, decided that the project’s success necessitated that she “just give over to [Kalkin’s] ideas and his vision and go with it.” She adds that “it was such a dramatic and bold kind of decision to design the house the way it is that anything I changed would sort of change the vision.” And with this single act of trust, the container house was born. “There’s this big open room where everybody can be together, and then there’s the privacy of having your own little container and being able to close the curtains and be in your own little space,” Adriance says. “Being up in these upstairs bedrooms is so great—you feel like you’re in a tree house.” In contrast to the bright-orange, corrugated-metal walls of the communal space, the sheetrock walls of the intimate containers seem conventional.

The decision to intensify the containers’ natural, rust-orange color surprised Adriance, who had originally envisioned a dark-green color that would blend into the landscape. But Adriance again deferred to Kalkin’s vision, and she now believes that the orange not only maintains the integrity of the containers, but that the color is in keeping with the structure’s overall authenticity. “Things are what they are. They’re not disguised…You see where things were welded. You see how things were put together. There is not an intent to hide where something’s bolted. It is what it is, and that’s part of the beauty of it.” Yet underlying this transparent approach to construction is the aura of mystery surrounding each shipping container’s history, about which Adriance admits to pondering. One almost wishes the containers came with passports, or the exotic labels of vintage
luggage, to document their global journeys.

The two teak staircases and upstairs hallways on each side of the house resemble the decking on a boat, further illustrating the seaside home’s connection to its seafaring past. The teak is coated with a clear varnish, allowing the wood’s natural radiance to shine through. Skylights let in natural light at the top of the staircases, where the metal ceiling starts its rise to the peak.

Located in the heart of the home, and accenting the teak stairs, is a rustic wooden farmhouse table that seats fifteen, facilitating large gatherings. The green microfiber drapes, a 12-foot-long custom couch, and large, overstuffed armchairs intentionally sized to compete with the scale of the massive room were all Albert Hadley’s inspirations. But it was Adriance who filled the home with local artwork, including Glimmer, an ocean scene painted by Tom Curry. Adriance also added whimsical wooden animal statues by Dan Falt, a former Wall Street trader who returned home to Maine and took up sculpting. Adriance is also responsible for what is perhaps the home’s pièce de résistance—the humorous (and fake) moose head installed prominently above the kitchen island.

Kalkin himself designed the two bronze lamps that bookend the couch. When Adriance was asked if the architect normally designs lighting or other accessories to go with his designs, she laughed and said that she wouldn’t say “normally” about anything the versatile, imaginative Kalkin dreams up. Adriance also says that this unconventional home is in many ways more functional than her family’s traditional New Jersey home. She loves the container home’s openness and ease of maintenance. The home’s cement floors are easily swept or vacuumed, and the radiant-heat system makes damp days and early winter mornings comfortable.

Adriance takes evident pride in her house—a pride that is clearly justified. She describes Kalkin’s design as one that “makes you stop and notice it. But it does it in a way that has you really consider your notions of What is house? What is home?” As for her own home, Adriance eloquently says that she sees it “as a work of immense creativity and art itself. It is our home for sure, but it has always been more than that for me.”