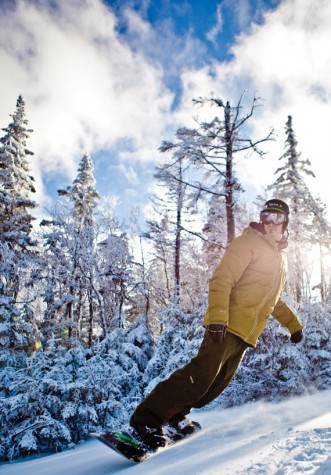 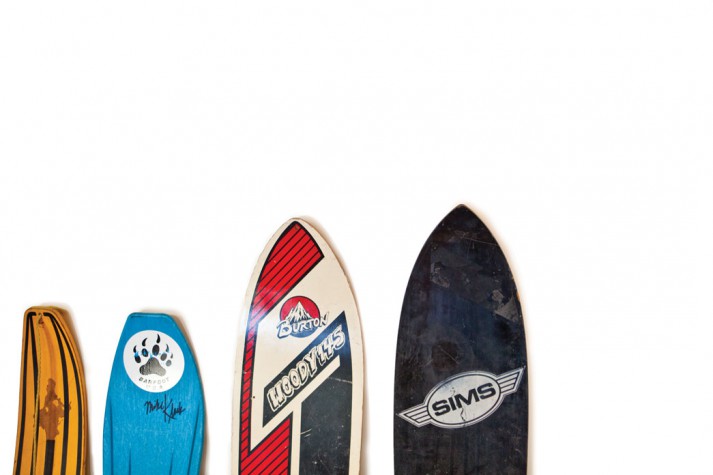 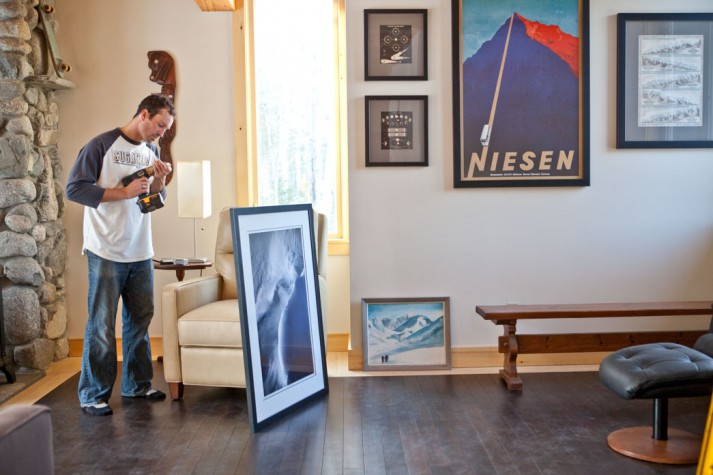 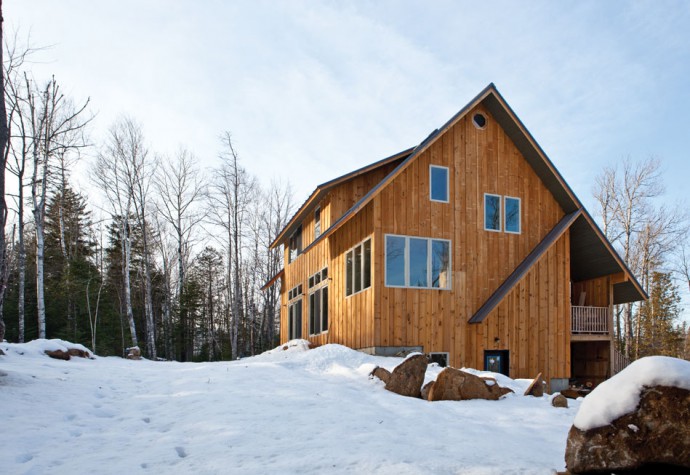 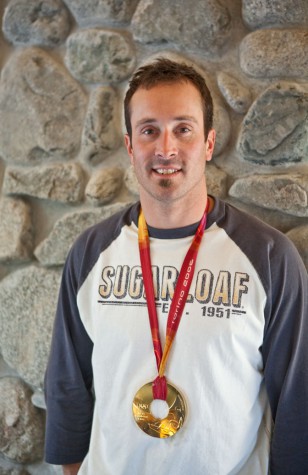 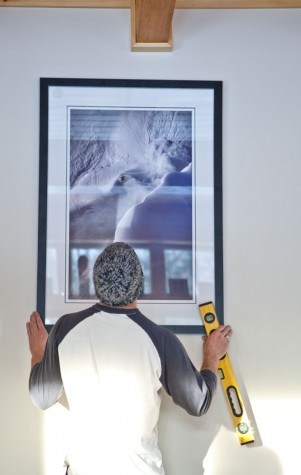 Like any small town with big pride, Farmington, Maine, boldly states its claim to fame on its welcome sign: “Welcome to Farmington. Hometown of Seth Wescott, 2006 Winter Olympic Gold Medalist.” Forty miles north up Route 27, cradled in the arms of Sugarloaf Mountain, the 33-year-old Wescott has just finished building his first house in time for the Vancouver Olympics. Before long, throngs of Loafers will begin arriving, but for now, the mountain is quiet and Wescott is happy to be home.

Ask anyone who has met Wescott and the first thing they say about him is how down to earth he is. Maybe that’s because of his rural Maine roots, or maybe it’s because he doesn’t measure himself by his medals. After all, when Wescott was a kid, skateboarders and snowboarders didn’t dream about the Olympics the way their friends on skis did. If they wanted to compete, they had to set their sights on other goals: the X Games or World Championships—the only places they were allowed to compete in a world reluctant to recognize snowboarding as a sport.

That’s partly why, in 2006, when Wescott stepped up to the podium in Torino, Italy, to accept his first Olympic gold medal, that “everything-goes-quiet” moment medalists often describe didn’t happen. Wescott heard the cheers loud and clear from the crowd around him; it had been the year before, at the World Championships, when he experienced his moment of soundless excitement. “That competition was almost bigger for me emotionally than the Olympics,” he says. “When I started in this sport, that was the ultimate goal we thought we could accomplish. I never dreamed we’d get to the Olympic level.”

That’s not to say Wescott didn’t savor his time in the Olympic spotlight. That day in Torino was marked by two major milestones. It was the debut of snowboardcross (SBX) in the Games, which Wescott had diligently lobbied for. And then, of course, Wescott was the first Mainer ever to bring home a gold medal from the Winter Games. Altho
ugh he was born in North Carolina, Wescott’s family moved to Maine when he was just fifteen months old; his mother is descended from seven generations of Mainers.

Like many kids who grew up in the mountains of Rangeley and Farmington, Wescott learned how to downhill ski in grade school, taking Tuesday trips with his schoolmates to Saddleback. When his family moved to Farmington, he began racing on the junior high ski team, and skied almost every day during the season. Then one day in sixth grade, he was night skiing when he saw a few high school kids putting on a snowboard demonstration. “I went back the next day and bought a board off one of the guys with my paper route money,” says Wescott. “From the first time I saw it, I wanted to be doing it.” From that point forward, he found every way he could to ride in between ski trips and lessons, even sometimes skipping races on weekends to ride at Sugarloaf instead. And when there wasn’t snow on the ground, he skateboarded.

While Wescott was doing what he loved, he was also earning serious points in the riding community. By the age of 13, he was already sponsored by snowboard manufacturer Burton. He later attended Carrabassett Valley Academy, a renowned proving ground for skiers and riders, where he began competing in New England Cup events, winning national titles twice. When Wescott graduated from high school in 1994, he wanted to postpone college, but his mother (a professor at University of Maine at Farmington) and father (a professor at Colby) had other plans. “I wound up going to Western State Colorado and basically used it as a hopping off point to the West. I would go out there and take off and go to Oregon or BC and be gone for three weeks—my parents had no idea.”

Out West, Wescott was contacted by a good friend from Maine who had just founded a snowboard company in Oregon. “I jumped right in. It allowed me to start traveling and really pursue what I wanted to do with riding.” After a year and a half of college, Wescott moved back to Maine and started postgraduate training at CVA. The first pro tour of the year was the biggest half-pipe event in North America, and Wescott placed third. He was 19 years old. “I was kind of like, ‘Okay, I can do this.’ That was the spark it took. Then it just continued to snowball.” He went on to compete in men’s half-pipe through the World Championships in 2003, and picked up SBX in 1997. After his Olympic victory, Wescott earned his first-ever World Cup victory in Arosa, Switzerland, in 2008, and went on to finish the year ranked number two in the World Cup standings.

AT HOME ON THE MOUNTAIN
After Wescott’s Olympic and World Cup successes, Boyne Resorts (the owners of Sugarloaf) offered him a contract. Instead of agreeing to a ten-year salary, though, Wescott wanted something a bit more practical: a house at the base of his mountain. It was a model not uncommon in the ski industry. Jackson Hole had given Tommy Moe a house after he won Olympic gold; Bretton Woods had done the same for Bode Miller. The owners of Sugarloaf agreed to the arrangement, and soon after, Wescott began taking a hands-on role in the construction of his 2,400-square-foot home. “I helped put ceiling boards in and did some framing. It was really neat to see it when it was a shell without any interior walls, and then to be able to change things around as we went.”
Having a home base on the mountain allows Wescott to immerse himself in the “job” dimension of snowboarding. Officially, his job is Sugarloaf’s ambassador of winter sports, leading the mountain’s learn-to-ski and learn-to-ride programs. Unofficially, he plays the role of consultant, spokesperson, fundraiser, and lobbyist for projects such as snowboard parks and half-pipes. In 2005, Wescott raised nearly $80,000 for the excavation of a new half-pipe venue. “I think at that point the owners of Sugarloaf started seeing that I could be someone who was tackling projects and facilitating the means to get them done,” he says.
That was only the beginning. In the past few months, Wescott has been at the helm of arguably one of the mountain’s most important initiatives to date: securing funding for a new gondola from the base to the summit. Supporters believe a $10 million signature lift would be the kind of draw that could reinstate Sugarloaf’s reputation as a world-class resort, a reputation it gained when the mountain’s first gondola was installed in 1965 (it was later removed in the mid-1990s). During a town selectmen’s meeting in October, Wescott made a passionate argument for a plan that would have the town of Carrabassett Valley purchase the gondola, in partnership with the resort owners, through a low-interest municipal bond. The plan is still in its early stages, but Wescott is hopeful. “It’s exciting. I really think we can pull it off. Sugarloaf is unique because we have an invested community of not only full-time residents, but people who have second homes here as well. Generations upon generations come back to expose their kids to skiing and snowboarding here.”

PASSION FOR THE PURITY
Throughout his life, competing has given Wescott a profound feeling of accomplishment, but his first and true love is for riding in purest form: the mountain, the snow, the rush. Wescott has spent every April for the past seven years free-riding in the untamed wilderness of Alaska. “It’s personal growth time for me. You’re in the deepest depths of nature and you get to go out there and truly challenge yourself mentally and physically to see if a goal you set for yourself is accomplishable—not in a four-year time period, but within half an hour. You go through the craziest emotional span you ever get to experience, from absolutely terrified to absolutely overjoyed in a matter of a minute and a half.”
In these big-mountain heli-riding environments, where even guides are sometimes reluctant to go, Wescott and his team assess conditions and make their own calls, particularly when it comes to analyzing snowpack. “It’s like reading a book on the season. You dig a snow pit and then look at all the different layers of snow to find cohesion. The Alaska coastal area has the world’s best snowpack as far as stability. Because it’s so close to the ocean, it has a much higher water content, so even if you get a bad layer, the snow has an amazing ability to heal itself and get those layers to bond again,” Wescott explains. “Working with Mother Nature is the hard part,” he says. “Dropping in to ride a line is easy.”

BEING FROM MAINE
Wescott has a few weeks to settle into his new house before he’s on the road again—this time for the Olympic Games in Vancouver, where he will be defending his SBX title. “I’m reaching a point where I’ve been traveling for nearly 15 years. That’s a long time. I still love it though. There’s nothing like experiencing a new place on the planet that’s incredibly beautiful. I look forward to doing some travel outside of snowboarding.” Before he begins traveling the world for reasons outside of snowboarding, Wescott first wants to become a three-time Olympian—after Vancouver, he hopes to compete in Sochi, Russia, in 2014.
Whether Wescott’s competing, helping Sugarloaf secure the next big thing, free-riding in Alaska, or surfing in South America, Maine will always be home. It’s a place that’s proud of him and that he’s proud of. “We’re challenged here on the East Coast. It’s not like the Pacific Northwest, which just gets huge amounts of snow,” says Wescott. “I like to visit places like Aspen and Sun Valley, but I couldn’t live there and deal with the pretense that sometimes exists with skiing out West. I like that people who come to Maine to ski and snowboard are coming here purely because they love to do it. It’s not a fashion thing for them. Our conditions aren’t always great, but you really see a true love of the sport in the people who are out here doing it.”
Inside his freshly furnished living room, Wescott stops to show me his first pair of tiny, red skis. They are delicate artifacts now, but it is easy to imagine him in the wintry backyards of his childhood, experiencing for the first time the feel of snow underfoot. His methods may have changed over the years, but one thing hasn’t: for as long as he could stand, Wescott has conquered snow.