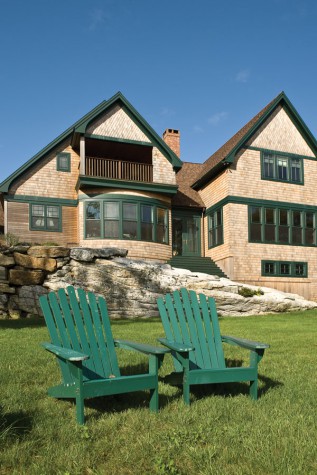 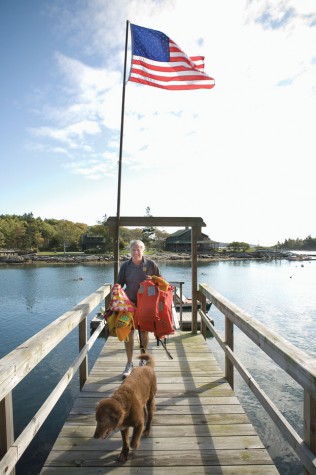 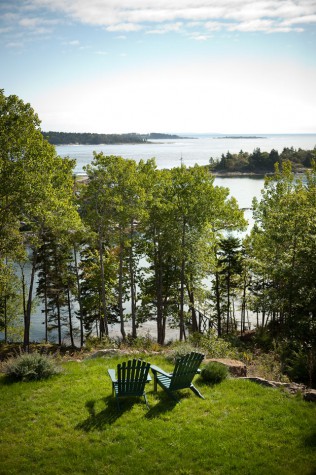 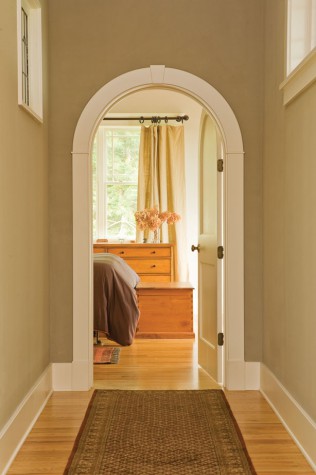 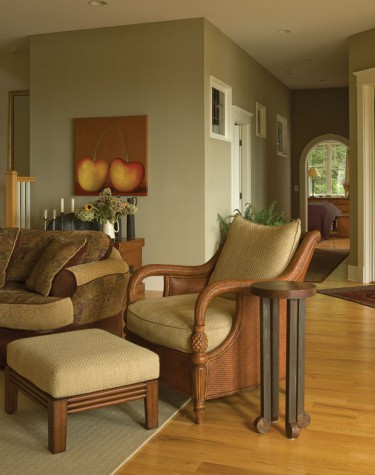 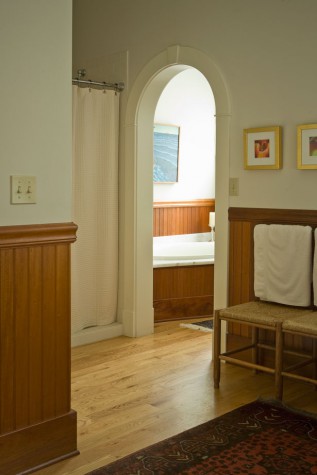 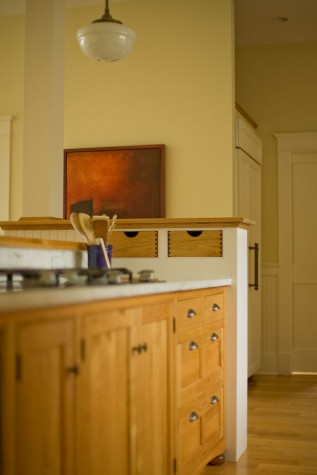 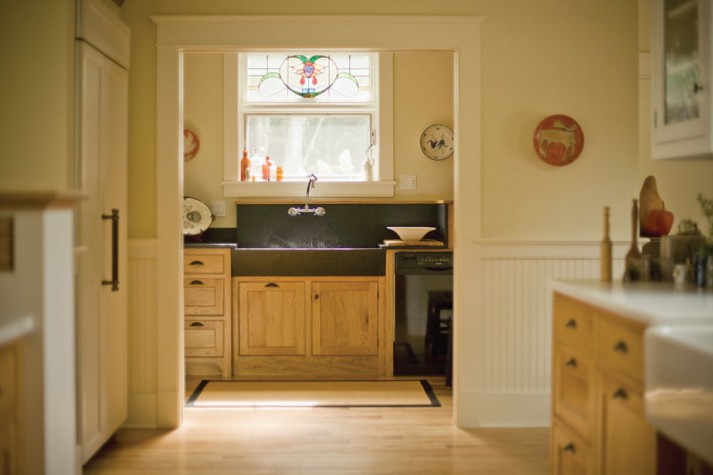 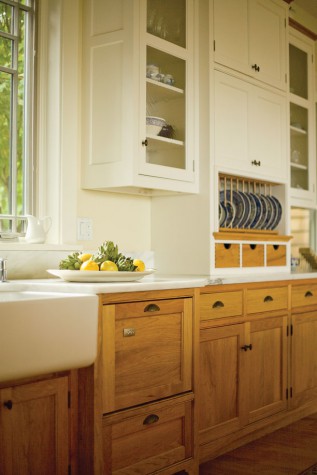 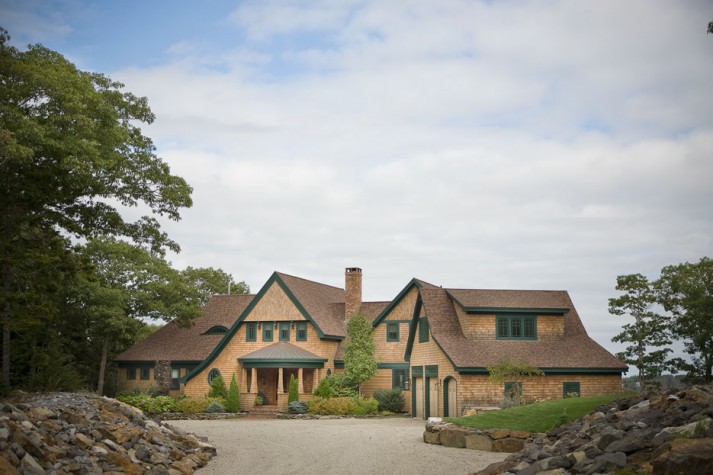 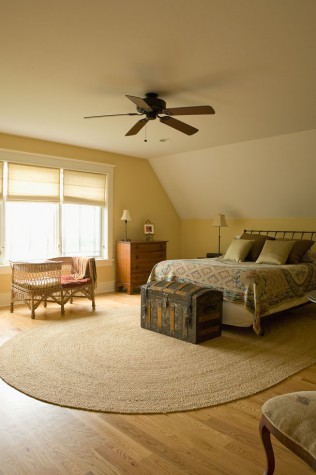 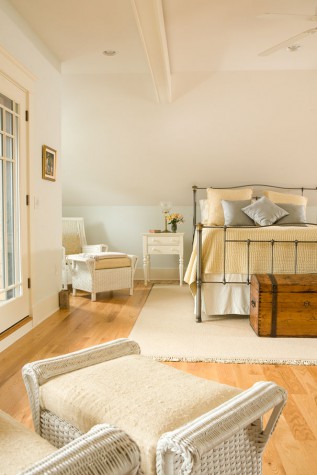 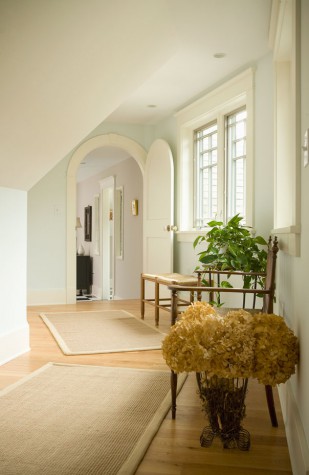 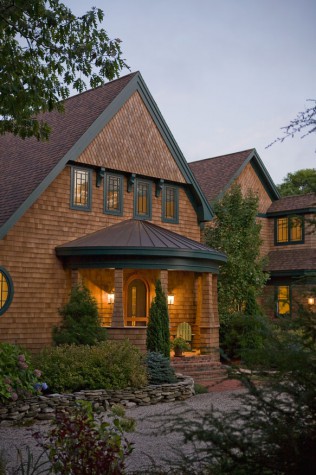 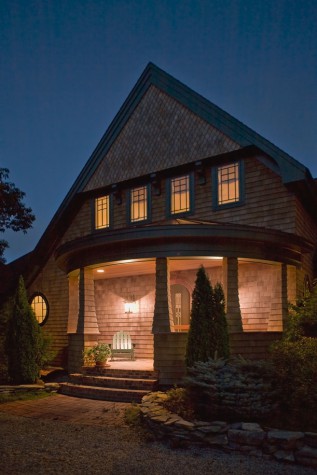 When it comes to her own home, realtor Connie Moss has something of a set design approach to real estate. After the stage has been set—her home constructed or renovated in as fine a fashion as possible—she lets the show of her life run for a few years, then it’s on to a new performance—a new residence and a new project. Since relocating to Maine in 1997, Moss has built and sold a home in South Bristol, renovated another on Pemaquid Point, and fixed up both a brownstone and an 1867 half-house in Portland. Her latest effort and current abode—an expansive Shingle Style home that sits on a ledge overlooking East Boothbay’s Little River—is currently on the market. She isn’t, she emphasizes, “flipping”—the real real-estate term for buying up properties for rapid resale—but enjoying the whole process of perfecting properties. “It’s an adventure,” she says. “I like to think that I respect the house. I like to do what the house needs in terms of material, and I like to feel that I add something to the house, that it is better off for my being there.”

The story of her present residence starts with a black-and-white advertisement that she saw in 2004. It was for property so dramatic—perched atop a wooded cliff with views toward the Damariscotta River and Monhegan Island—that she couldn’t believe someone hadn’t already built on it. “Sometimes in real estate,” she says, “you see beautiful property, but the house isn’t nice enough or vice versa.” She didn’t want to make the same mistake. From the start, her goal was to build a house that “really reflected the land.” And because she had spent time in Portland and familiarized herself with the work of John Calvin Stevens, she decided to build a home reminiscent of one of his cottages.

Of the final product, Moss says: “In my mind, everything started in the pantry.” And the pantry itself started with an antique black-slate sink, a find from Portland Architectural Salvage, around which she fitted butternut cabinetry, stained glass, and workman-like fixtures. “Everything was based on what design elements would be appropriate for a home that had a pantry like that.” To incorporate elements of John Calvin Stevens’s aesthetic into her own design, Moss relied on the expertise of Max Alan Arnold of Newcastle’s Stone Boat Architectural Design and Eric Marden of Boothbay Harbor’s Marden Builders. For the exterior, she opted for multiple rooflines, forest green paint, cedar shingles mixed with clapboards, and an assortment of leaded, oval, eyebrow, and stained-glass windows. For the interior, she selected oak flooring, mahogany and butternut cabinetry, and countertops made of marble and slate. Curved elements were repeated throughout the house, starting with the rounded front porch entrance with flared shingle pillars and continuing with the doorways, back porch, and central staircase. A large, gently bowed window of leaded glass dominates the home’s central space, a large combination living room, dining room, and kitchen.

In John Calvin Stevens’s day, one wouldn’t find a microwave oven or a dishwasher, so Moss decided to hide away many of the appurtenances of contemporary life. Televisions are tucked behind cabinet doors, a laundry basket is enclosed in a pullout drawer, and the refrigerator is concealed behind beadboard. Scooped-out cubby drawers hide clutter in the kitchen and bathrooms. Indeed, everything about the home has a tidy feel, with pocket doors for many of the rooms and a pull-out drawer that functions as a woodbox for the living room’s floor-to-ceiling, granite and sandstone fireplace.

For the kitchen, Moss worked with her good friend Bruce Swift of Bristol’s Bruce H. Swift Cabinetmakers, Inc. Here, only the stovetop gives evidence of twenty-first-century kitchen technology. The room features a handcast Shaws Original farmhouse sink that resembles a miniature bathtub. The marble countertop has a soft luster—“I’m not a big fan of shiny surfaces,” says Moss—and the cabinets are butternut, the fixtures oil-rubbed bronze. Moss chose bun feet for the cabinetry to give the impression of furniture.

Along with the pantry’s black-slate sink, Moss found many of the home’s windows at Portland Architectural Salvage. In some cases, she didn’t know where they would end up, and she and Max Arnold made placement decisions during the construction process. Much of the lighting came from Portland’s Nostalgia Lighting. Because of the home’s scale, Moss couldn’t necessarily buy items off the shelf, so lightsmith Burr Chase helped her find appropriate replicas of period lights. Other elements of the home—such as an unusual chaise lounge in the master bedroom—were found at auction. The photos of vintage sailboats ascending the central stairwell were printed off glass plate negatives, also found at auction.

Given all her moving, you might assume that Moss wouldn’t take much with her from home to home (and she does, in fact, leave some things behind), but there are certain possessions—a wood trunk that Moss likes because a friend refinished it, a unique, antique tiled stove that she and her husband have owned since before they were married—that always go with her. Not everything in the house is one of a kind and hard to find, though. The floor-to-ceiling brown curtains in the master bedroom are from Restoration Hardware, while the bedside tables in a guest room came from Pottery Barn. Moss bought Oriental rugs from dealers around the state, but she also purchased jute rugs from catalogs.

Beyond the home’s large central area, there are four master bedroom suites, each with a different feel. One seems ready-made for a child, with white wicker furniture, sleigh bed, and a whimsical Jane Dahmen painting of a fantasy castle with a creature floating above. A second bedroom Moss thinks of as more “masculine” with its dark furniture, wrought-iron bed, and walls painted a reddish yellow. For the accompanying bathroom, Moss used rust marble—“the flashiest piece in the house”—and Douglas fir. A third bedroom functions as a stand-alone apartment with a small kitchen, loggia, and bathroom/dressing room. Its palette seems inspired by the ocean outside. “I never used blue before,” Moss says, “but you could go in and out of this room and never remember what color it was.”

One aspect of the house that is definitively not drawn from John Calvin Stevens is the contemporary art, a collection culled from the two seasons that Moss and her husband owned The Firehouse Gallery in Damariscotta. Speaking of the art gallery and why she bought it, Moss says she once joked to an interviewer, “I have a marketing background, and we manufactured industrial adhesives, so it seemed like an obvious connection to fine art.” (Before moving to Maine, Connie and her husband, Michael, both worked for a Chicago company known for its head gaskets.) In fact, the Chicago job allowed the couple to retire early—she at 49 and he at 55—and begin their peripatetic Maine adventures.

Why move on from such a lovely space? “Oh,” says Moss, “I do feel attached, but I’m practical. We don’t need a 7,000-square-foot home, and I knew that when we built it.” What she wanted, all along, it seems, was the puzzle of the place. What house did the property need? The house that she built. Now that that house is done, she would like another problem to solve. She has purchased a Portland condo and will move there after she sells the Boothbay home, but it’s just a place to tide Moss over: a place to live, it’s true, but not a project.