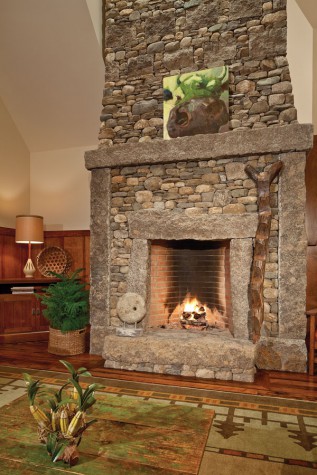 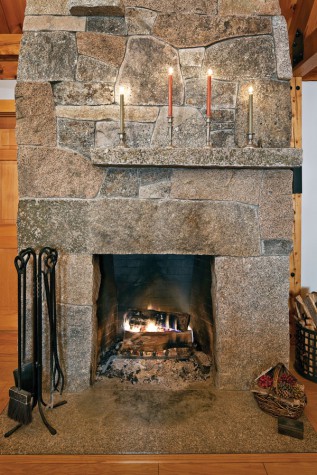 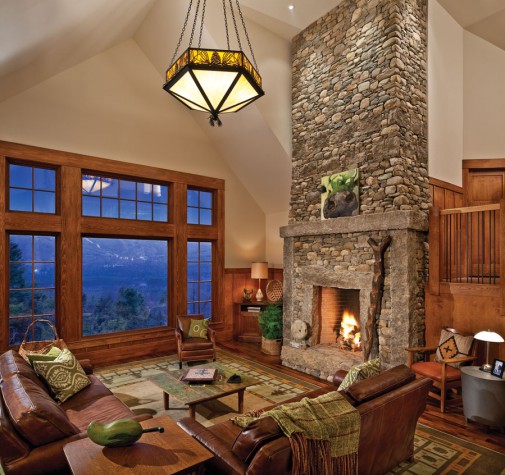 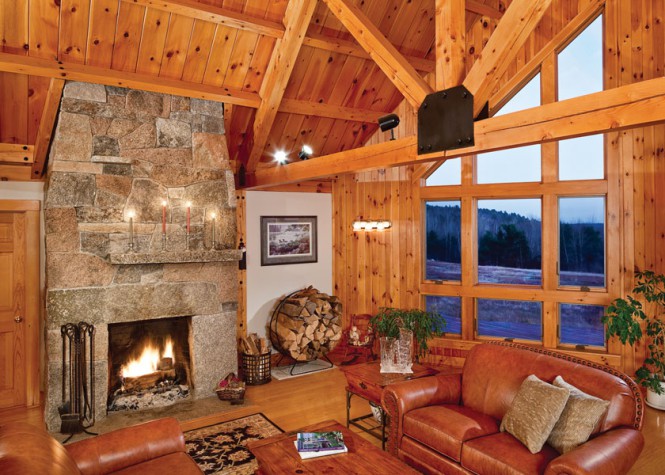 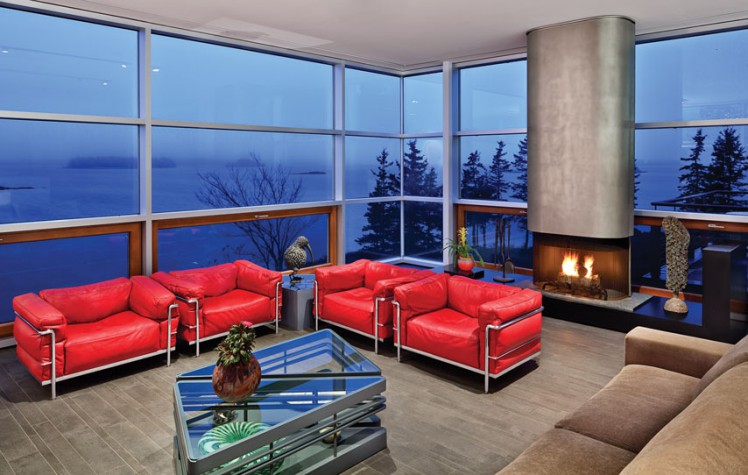 When it comes to heating a room, fireplaces aren’t always the most efficient option, but then there’s not much romance to snuggling under a blanket by the wood stove, even less in sipping wine around the monitor heater. Fireplaces offer charm, sometimes drama, certainly associations of comfort. Warm your hands around a mug of hot chocolate, toast your toes in front of the fireplace…this is the reward for a driveway well shoveled. Today, some Maine builders and designers are complicating our sense of what is beautiful, and even practical, by finding surprising new ways of constructing the home’s hearth.

Take the mammoth fireplace that Brian Fairfield built for a home in Newry. “It’s really medieval,” says Fairfield. “There should be a castle around it.” It’s not just the fireplace’s
dimensions—10 feet across and 27 feet high—that seem outsized. Fairfield spent six solid months devoted to the project. Homeowners Fred and Donna Trudo got the idea for the fireplace from a television show that led them to the book Stone Design: The Artistry of Lew French. When Fairfield saw the granite-slab fireplace on the book’s cover, he said to Fred, “I’ve got your stuff.”

One day, a little over three years ago, Fairfield was at a gas station when he struck up a conversation with a man who mentioned that Italian immigrants had once quarried his Arundel property. The quarries, the man said, had been abandoned for a hundred years. He then offered Fairfield the stone if he was interested. “I was in awe,” Fairfield says of the hand-split granite, but it wasn’t until two years later, when the Trudos approached Fairfield about working on his fireplace, that Fairfield had the opportunity to use the stone.

Architect Matt O’Malia faced a different sort of challenge when he set out to design a fireplace for a room surrounded on three sides by 10-foot, floor-to-ceiling glass windows. Though the homeowners wanted to be able to build a fire on chilly evenings, they didn’t want to obstruct their view of Penobscot Bay. So O’Malia, working with Bruce Norelius—both men were then with Blu
e Hill’s Elliott Elliott Norelius Architecture—designed a fireplace hidden inside a brushed stainless-steel tube. When in the up position, the stainless-steel tube hangs from the ceiling above a hearth of cast polished concrete with a soapstone insert. When in the down position, an enclosure drops from the tube to settle on the hearth and form the fireplace.

In designing a fireplace façade for a coastal Maine home, Jeff Gammelin, owner of Freshwater Stone in Orland, had the challenge of creating a pleasing overall composition in granite. Instead of paint and canvas, Gammelin uses natural color, the lines between adjacent stones, and the arrangement of rocks to achieve his effects. “We’ve had good luck,” says Gammelin of his company’s many fireplace projects, “with using stones from several quarries, since mixed weathered granite tends to blend nicely.” The puzzle-piece result, Gammelin adds, is “subtle, with lines and groupings that don’t jump out at you.”

The granite for this Newry fireplace (opposite) comes from a quarry in Arundel. The fieldstone, purchased from J.C. Stone Inc. in Jefferson, is called “Old New England,” because it consists of rocks reclaimed from old New England stonewalls. Nate Libby, of Nate Libby’s Masonry in Biddeford, was responsible for building the chimney, firebox, and fireplace for which Brian Fairfield did the stonework. Libby says that this firebox is shallower than a standard firebox and “more like what they used to build in the 1800s.” It is also, he says, “more efficient, since the design is better at throwing heat back into the room.”

The fireplace for this home on Little Deer Isle consists of a stainless-steel tube that hides a fireplace. “The strange thing about this fireplace,” says project designer Matt O’Malia, “is that it hangs from the ceiling.” A grab bar at the back of the tube allows the fireplace element to be lowered onto the hearth. The same bar is used to open the damper. The back portion of the fireplace is made of solid steel to prevent the sort of excessive heat transfer that would ordinarily cause the windows behind the fireplace to crack. The front portion has a screen that opens in the middle and can be brushed to the side when adding logs. A complex series of pulleys inside the tube makes it easier to move the fireplace element up and down manually. Portland structural engineers devised a way to safely attach the fireplace to the steel-framed house. Brewer-based metal fabricators were responsible for the actual construction of the fireplace and its stainless-steel casing.

Stonemason Tom Brennan of Freshwater Stone built this fireplace, which was designed by Jeff Gammelin, Freshwater’s owner. The granite comes from several Maine quarries, including Freshwater Stone’s own quarry in Frankfort, which is located ten miles from the company’s Orland headquarters. Gammelin designed this fireplace’s asymmetrical mantel to counterbalance the lintel stone, which doesn’t extend all the way across. The homeowners had no preconceived notions about this fireplace, asking only that Freshwater Stone produce something “natural and simple.”