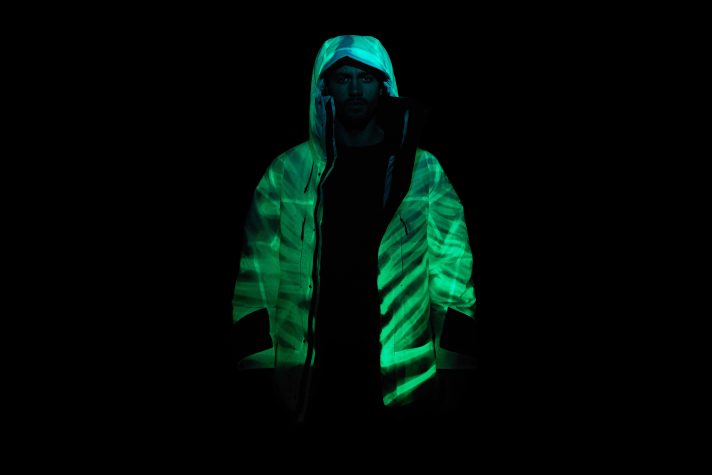 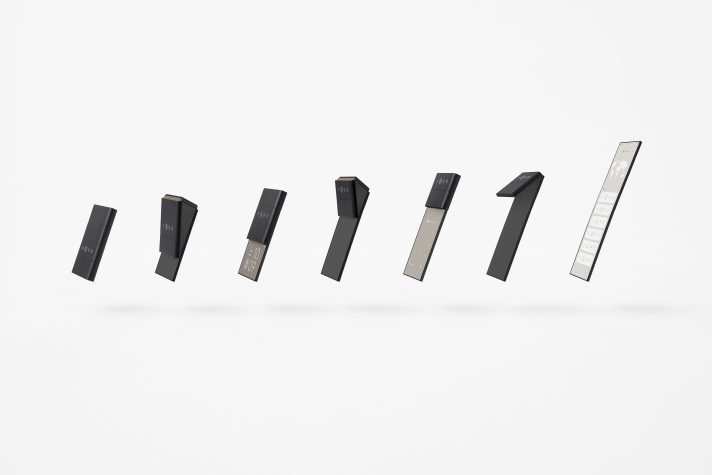 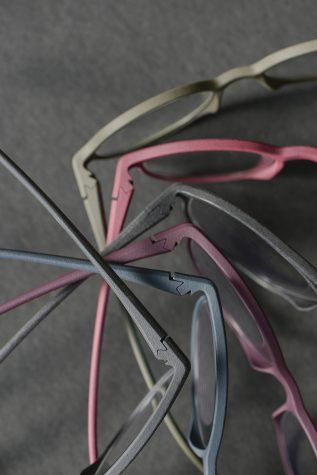 Rolf's 'Substance' glasses, made from powdered castor beans and water. 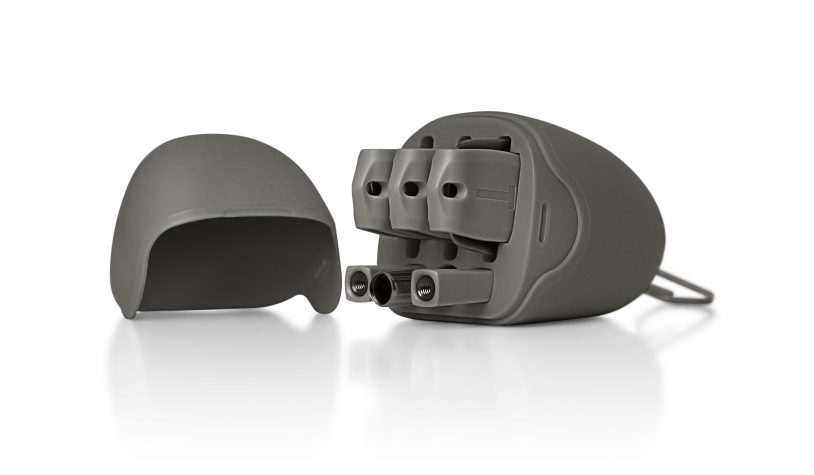 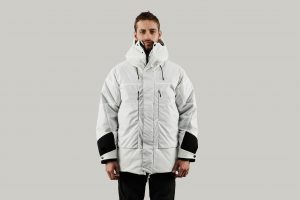 Twin brothers Nick and Steve Tidball of the futuristic clothing brand VOLLEBAK have created a solar-powered, glow-in-the-dark winter coat. The SOLAR CHARGED PUFFER ($1,295) contains an ultra-thin polyurethane membrane that, like a plant, rapidly absorbs any light it comes into contact with. As soon as the all-white jacket encounters darkness, it glows green like kryptonite, retaining a ghostly glow for up to 12 hours. The insulating layer is made out of synthetic fibers from plastic bottles, which mimic down feathers and have a 600+ fill power. Vollebak’s cofounders are ultramarathoners who believe it’s not enough to simply wear clothing; what we wear should play a role in how we encounter the changing climate. (Their heat-conducting graphene jacket saved tech CEO and adventurer Nikita Gushchin’s life when he got lost trekking in the Nepalese mountains.) The puffer can withstand temperatures as low as negative 40 degrees Fahrenheit and makes the person wearing it visible in the dark, a cool optical trick that also makes the jacket highly visible to search parties. 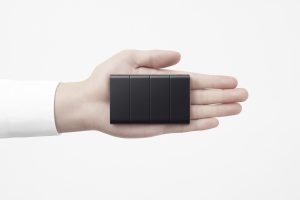 The trend for phone screens over the past few years has been the bigger the better, until people realized they could no longer fit them in their pockets. Japanese design studio NENDO has a solution: a seven-inch OLED touchscreen phone that can fold down “like an inchworm,” to the size of a credit card. Fashioned for the Chinese smart device manufacturer OPPO, the SLIDE-PHONE is more than an enlarged screen: When fully unfolded and positioned horizontally, it can be used like a game controller, with touchscreen buttons located on each side. Several apps can be displayed in a row, allowing the user to multitask more seamlessly and efficiently. The full-screen mode also allows for panoramic photography and video play. Each of the phone’s hinges are covered in lush suede leather and accented with calming earth tones. 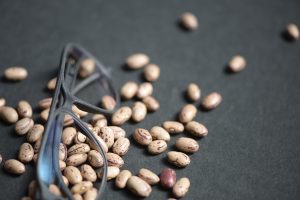 Eyewear manufacturer ROLF has produced a collection of 3D-printed glasses that are completely biodegradable. Called SUBSTANCE, the glasses are made from powdered castor beans and water. The toxic hulls of the beans are removed before the beans are ground into a powder and combined with water (the binding element), which is then used to 3D print the frames. The glasses have a unique hinge design that removes any need for screws or spare parts, and therefore any need for maintenance. Substance frames come in 23 different models in six colors. Castor bean plants grow quickly in tropical climates without genetic engineering— reaching up to nearly 20 feet in 6 months—and they don’t compete with food crops, making them an incredibly sustainable resource.

Israeli material designer SHAHAR LIVNE, who won the title of emerging designer of the year at Dezeen Awards 2020, has created a line of ocean-plastic jewelry for BALENCIAGA’s fall 2021 collection, AFTERWORLD: AGE OF TOMORROW. The pieces, including three different bangles, one ring, and two pairs of hooped earrings, are made from plastics recovered by the recycled plastics marketplace OCEANWORKS and calcium carbonate, which is a waste product from the marble industry. Livne mixes these substances, using heat and pressure, to create a clay-like material called Lithoplast that she then shapes by hand. The artist sees this repurposed waste as a valuable commodity for future generations when plastics may have gone away for good.

THE MAINE RAIL-TRAIL PLAN, a project recently put forward by the Maine Trail Coalition, would add up to 250 miles of interconnected, multi-use trails to the state. The plan proposes that over the next decade 13 rail-trail projects will be constructed, and at least five prospective ones will be developed in the decade following. According to a poll taken last year by the coalition, 86 percent of Mainers, regardless of political leanings, region, and age, support creating recreational trails on unused rail corridors as long as they can be converted back to railroad use if needed. Preserving and maintaining an active rail corridor, thus extending future Amtrak, commuter, or freight service from Boston through Maine’s population centers, is also part of the plan. If implemented, the project would sew up much of the northern end of the 3,000-mile-long East Coast Greenway, the most visited “park” in America. 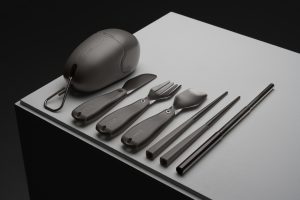 PHARRELL WILLIAMS has partnered with PENTATONIC, a design and tech company focused on developing products with a circular economy in mind, to produce a line of reusable, portable cutlery made from old CDs. The cutlery set, called PEBBLE, comes with a fork, knife, spoon, straw, and chopsticks. Each utensil folds so everything fits into a compact, pebble-shaped carrying case, which also has an attached lanyard for easy transport. Keeping the product’s end of life in mind, Pentatonic has also launched a trade-back program: the Pebble has a scannable chip that initiates the process for it to be returned to the company when you’re done. You’ll get store credit, and they’ll turn it into something new.

CAPE ELIZABETH is moving toward sustainability. A proposed seven-acre solar farm, to be installed next summer on the town’s capped landfill site near the recycling center, is under review with the planning board. The town council has authorized a lease agreement with Burlington, Vermont–based solar company ENCORE RENEWABLE ENERGY; the agreement states that Encore will pay the town $7,000 a year to occupy the space. The town expects the solar project to offset 75 to 80 percent of municipal and school energy costs, estimating that the electricity and income savings will reach $2.1 million over the next 20 years. 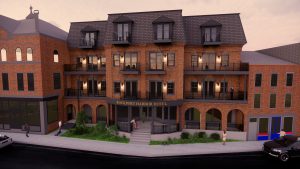 In February 2020 the ROCKPORT PLANNING BOARD approved a hotel proposed for a vacant lot between 18 Central Oyster Bar and Grill and Seafolk Coffee in downtown Rockport. Excavation for the ROCKPORT HARBOR HOTEL began in early fall 2020. The initial proposal planned for a 35-room boutique hotel, but the number of rooms has since been reduced to 26 (with a possible final total of 20 rooms, depending on the outcome of an appeal from a local citizen’s group). Although the project was unanimously approved, the planning board requires the developers to maintain off-site parking for guests and employees. Regardless of the number of rooms inside the building, the exterior footprint and overall structural and mechanical design will stay the same. Once complete, this will be the first hotel in downtown Rockport. 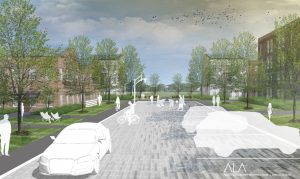 Cooperative housing isn’t a new idea, but it’s relatively rare in Maine. That is starting to change as the Portland City Council recently approved the development of DOUGLASS COMMONS, a 108-unit project on the 3.24-acre site in the Libbytown neighborhood where West School once stood. Co-ops are being embraced as a way to provide housing for what city councilors have called the “missing middle,” middle-class families who can’t afford Portland’s skyrocketing housing prices. Working with MAINE COOPERATIVE DEVELOPMENT PARTNERS and SZANTON COMPANY, the conceptual proposal includes a fourstory 56-unit apartment building and 52 co-op (or limited equity ownership) homes in 3 three-story buildings with 12 units each and 4 two-story buildings with four units each. (Credit: Aceto Landscape Architects)