A coastal compound created by a family of artists, makers, and architects 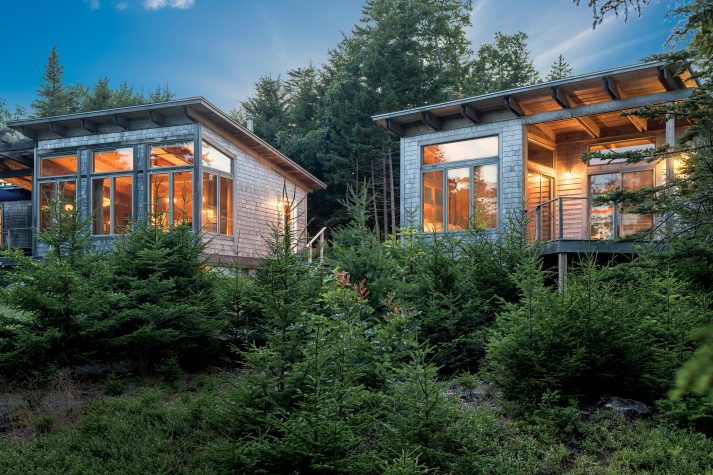 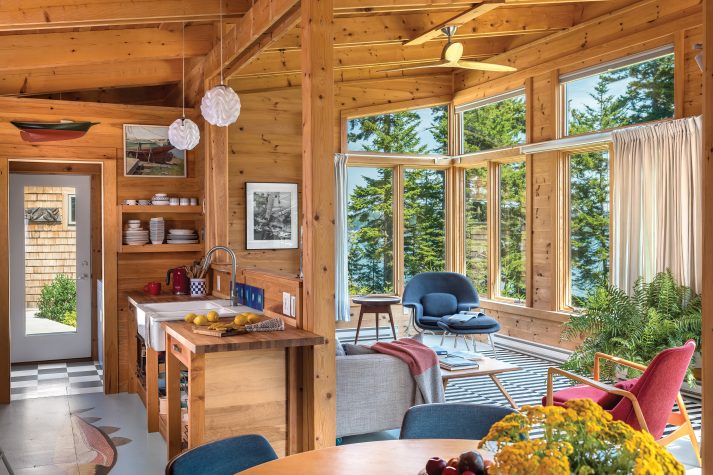 Austin and Rockwell opted for open shelving in the IKEA-sourced kitchen. The couple chose a modified primary color scheme for the house as shown in the living room, which features a Saarinen Womb chair, Ellen Lounge chairs by Latitude Run, and a handmade table from Joan's father, Dudley Rockwell. 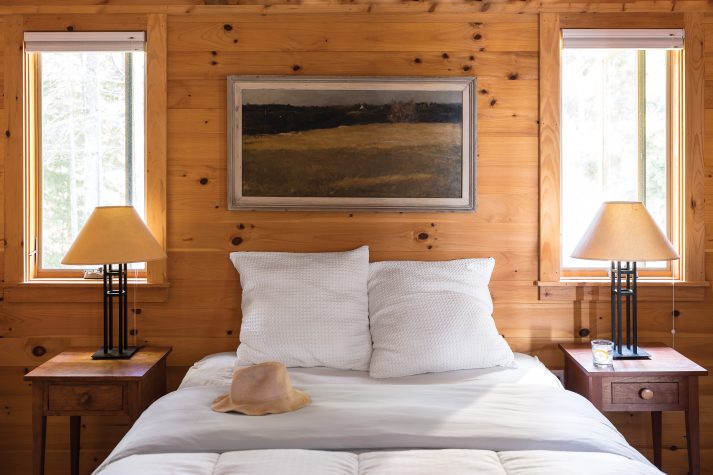 The master bedroom, featuring side tables made by Joan's father and a landscape from Joan's painter grandfather. 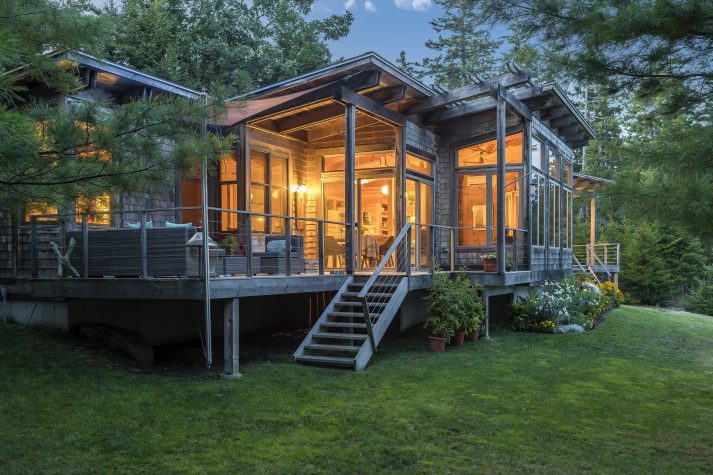 The dusk-into-nighttime view shows the house gleaming like a lantern. 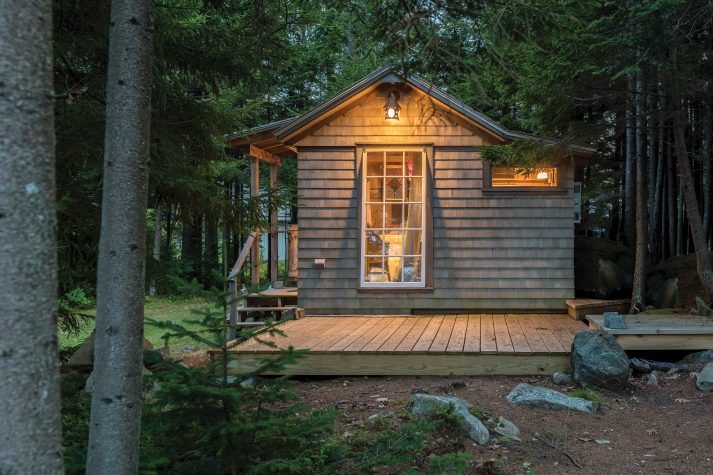 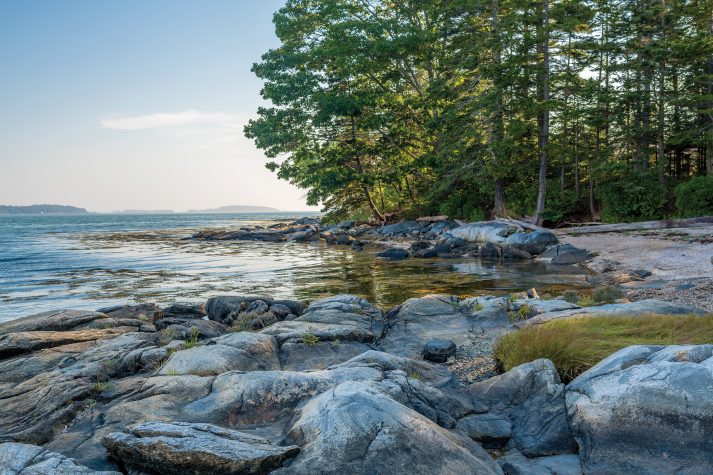 The heritage of the land and connection to Joan Rockwell's family was all-important in this project. 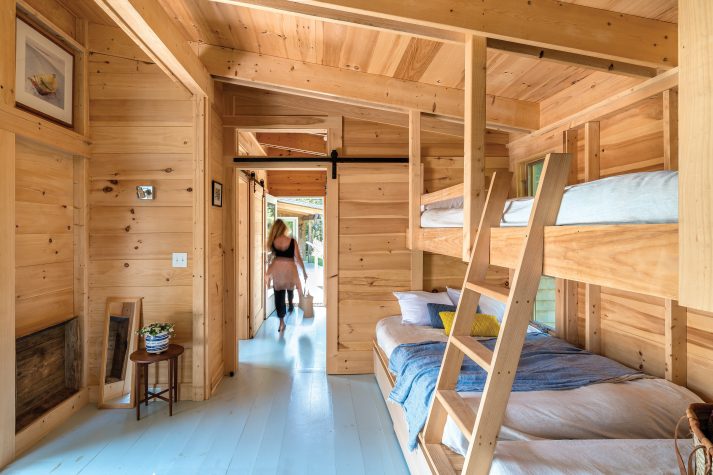 One of the bedrooms in the annex is the "bunk room," which allows for larger family gatherings including both Rockwell's and Austin's grandchildren. 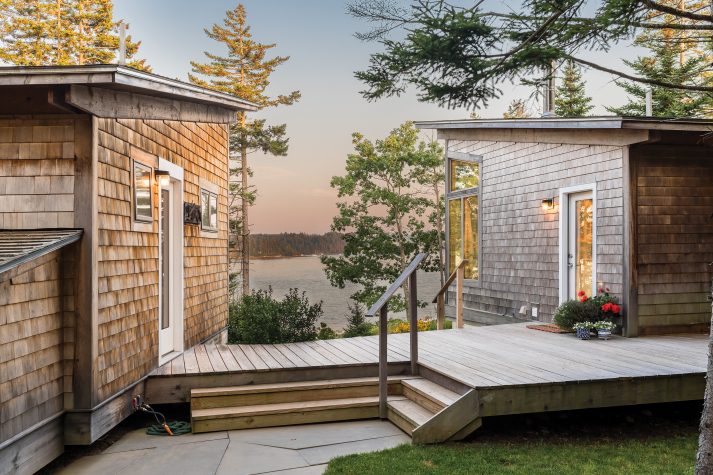 The two primary residences feature a straightforward midcentury shed-roof architecture and traditional shingled cladding. They are connected by a deck, bringing them close to each other while also offering an element of privacy. 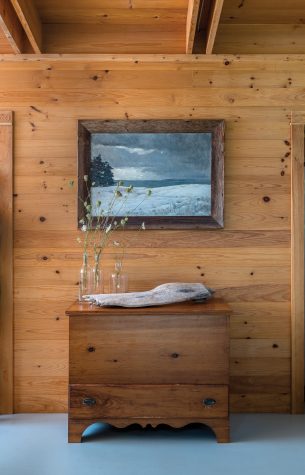 The compound features both newly sourced furniture and family heirlooms, including this chest, painting, and carved oil wood relief.

The town of Cushing is not even remotely on the beaten path, and yet it is a place—and a landscape—that is deeply enmeshed in the American imagination. It is where Joan Rockwell’s family has lived for well more than a century, and it is here that her uncle, Andrew Wyeth, painted his way into our culture and our psyche.

And it is in Cushing that Rockwell, a landscape architect, and her architect husband, Bill Austin, built by hand the house that they hope not just to live in but to pass on to generations to come. They call it the Point or, more officially, Bird Point. And in the past seven years it has grown from a single small cottage to a quirky compound of both old and new buildings, and it is not yet finished.

To say that this project is a labor of love would be to understate the case. Not only does it speak to Rockwell’s connection to this special part of Maine that has long been a part of her extended family, but it also embodies the philosophy that Rockwell and Austin embrace in their work and lives.

Rockwell grew up spending summers on the land, and her roots run deep. “The Point has been in our family for over 100 years,” she says. Her great-grandfather acquired it in 1904. “Both of my grandmothers were lifelong friends, so it would be natural for them to settle in this area later in life.” In turn, Austin, a Canadian by birth—his family moved to Massachusetts in 1958—has fully embraced the history and ecology of the land and the landscape that has for so long been part of the Rockwell, Wyeth, and Olson families.

To circle back briefly (and compress history): this part of Maine has long been the home (or summer home) of four families—Wyeth, James, Rockwell, and Olson. It was here that the painter Andrew Wyeth (whose family spent summers in Port Clyde, just six miles away) met Betsy James, who in turn took him to the Olson house on their first date (they married within a year). In the decades to follow, Andrew Wyeth painted the Olson house hundreds of times, but most famously in Christina’s World in 1948.

It was also here that Louise James, who was Betsy Wyeth’s sister and Joan Rockwell’s mother, met and married Dudley Rockwell, who would go on to become a well-known metallurgist as well as a fine furniture maker, painter, and Dixieland musician. To this day, Cushing remains the summer and year-round habitat of this sprawling extended family. “This place changed my world. As a child I spent my summers surrounded by art, family, and a beautiful landscape, and to this day it has an enormous impact on me,” says Rockwell.

In 1999 Rockwell and Austin acquired five acres of land along the mouth of the St. George River with the idea of creating a house that would eventually be their permanent home. Their landscape and architectural practices—they work both separately and together—are in Brattleboro, Vermont, and Greenfield, Massachusetts.

Together, they designed the house, and as might be expected, it went through several iterations. “But,” says Rockwell, “we had a clear motivation and an understanding of what we were doing and why we were doing it.” Adds Austin, “We knew we were going to retire here, so we concentrated on designing very simple sheds in concert with the tradition of the midcentury modern revival. We had the vision of something very straightforward and totally in concert with the land.” “We knew we wanted to use local materials and have it be completely energy efficient,” reveals Rockwell.

Then the adventure began: on May 1, 2013, to be precise. The couple arrived on the wooded, rustic, rocky waterfront site. They began to build, day after day, not missing a beat for wind or rain. To begin with, there were the trees that they would transform into their home—all from the site. They removed the bark and began building, moving in (giving true meaning to the Maine idea of “camp”) before there was even a roof. “We actually built the house ourselves, by hand,” says Austin. The two of them worked nonstop, and two young carpenters pitched in as they could on weekends.

“They were long days,” says Austin, “but it was fun.” They had originally envisioned a two-bedroom, two-bathroom house but soon determined that would put them over budget, so they constructed a tiny house of 850 square feet with just a single bedroom, a small office, a bathroom, and living and dining space. The house was thus conceived to function—especially in summer—as an “enclosed porch.”

Soon, however, the compound began to grow. The couple’s blended family includes four grown children as well as grandchildren. This is when the “annex” was conceived, with two more bedrooms (one with bunks to accommodate as many as six) connected to the main house by a deck. They also moved a century-old bathhouse—it had originally belonged to the Olson family—to the site, along with a small 1970s-era prefab garden shed called “Marianna’s cabin” (after Rockwell’s aunt) that they expanded and upgraded. Still to come is Austin’s workshop, which, he jokes, you might have expected to come first, not last.

“The concept of a family compound is to emphasize and support individual and collective needs to be both private and together,” says Rockwell. These ideas are manifested in the careful siting of the structures and the juxtaposition of each building to each other. “For example,” she says, “the annex is slightly angled from the main house and connected by a generous deck. We scrutinized the angle, distance, and window openings to provide privacy while feeling connected and still have a wonderful ocean view.” That water view is all important, and it is achieved in part by the placement of the buildings, which offer a certain amount of surprise to the first-time visitor. It’s really only when you go into the house that you get the full view of the water. The area has a robust lobstering industry, and there are seals and dolphins as well as sharks heading north (or south), seasonally.

Wood reigns, inside and out, as you might expect. There’s no wallpaper, no tile. The house and bunkhouse are made of old growth redwood, and the interiors boast tongue-and-groove Douglas fir and eastern white pine along with painted birch plywood floors. Rockwell says they “deliberately chose to have open storage and pullout shelving to recreate the feel of a casual summer cottage that I had known as a child, where pots and pans and dinnerware were visible and immediately accessible.” There are no closed cabinets. Many of the doors are sliding glass to reinforce the dual ideas of openness and rusticity.

The palette relies on primary colors. The furniture is intentionally simple and durable: pieces sourced from catalog sites such as IKEA and All Modern with the addition of such family heirlooms as a chest made by Rockwell’s father. There are watercolors from her uncle (Wyeth) and, in testimony to the family’s full artistic pedigree, works by Merle James (Rockwell’s grandfather and Wyeth’s father-in-law), as well as nautical models and bas-relief work by Rockwell’s father and pencil sketches from her aunt Gwendolyn Cook, the third of the James sisters.

Austin himself designed the round dining table, and it is not merely a work of fine craftsmanship but also a symbol of their larger vision for the Point. In their professional work both Rockwell and Austin place importance on “community, sharing, equality, and family,” and at one point they started a nonprofit planning and design entity called Community Vision. “The focus,” recalls Rockwell, “was on understanding what makes a town, village, community, etc., unique and how you could make changes in the future and still honor the special sense of place.” The land and structures connect them all with their past, present, and future. The art and design will continue to evolve.

It’s all very purposeful and personal. “Intimacy and warmth were exactly what we were after,” says Austin. “When people walk in, they say, ‘Oh my gosh, this is beautiful,’ and then they flop down on a chair. I consider that a grand slam home run. You can build a house, but you have to make a home.” 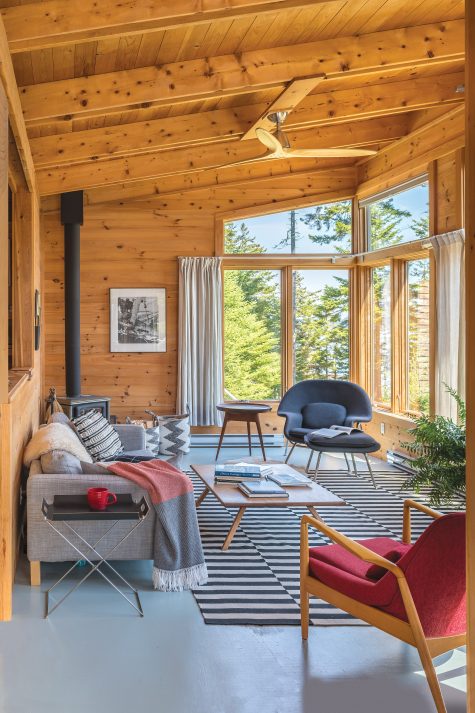 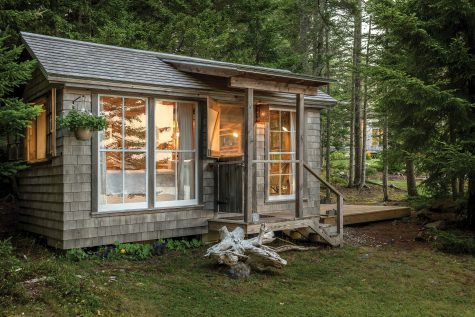 "Marianna's cabin," marked by a "found sculpture" of driftwood outside. 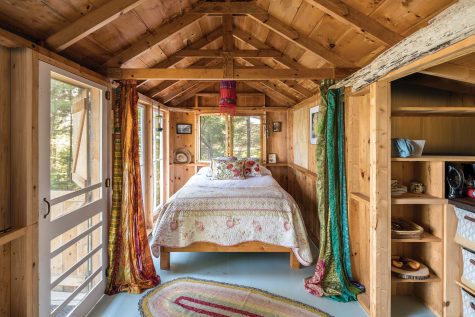 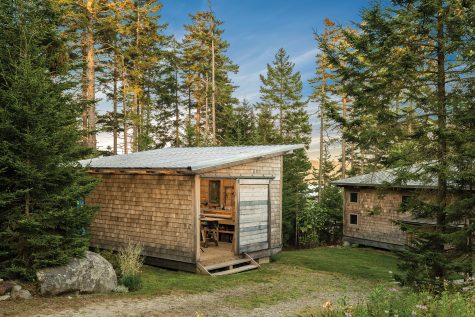 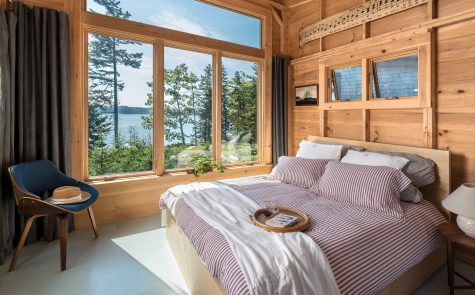 The Queen's Room in the annex, which features a glorious view. 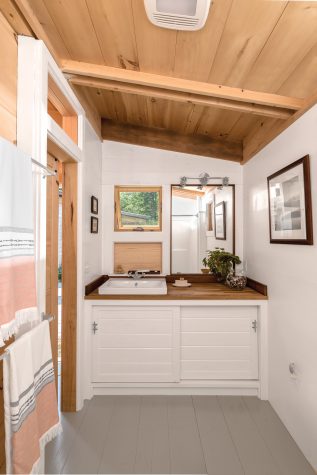 A small bathroom features both art and a view out onto the landscape. 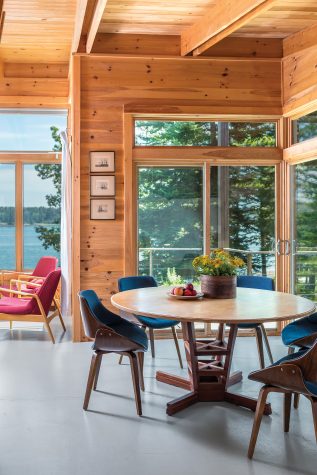 The round dining table, designed by Austin, underscores the philosophy behind the whole compound that focuses on family, community, and the environment. Surrounding it are Amo Modern Dining chairs from allmodern.com. 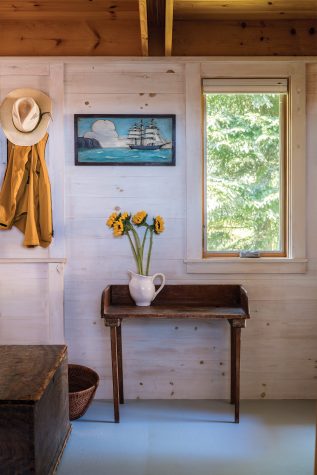 Family heirlooms can be found throughout the rooms, all reflecting Joan Rockwell's heritage. 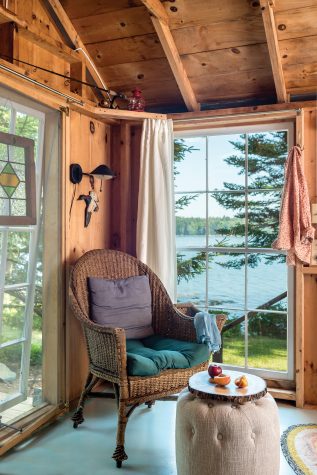