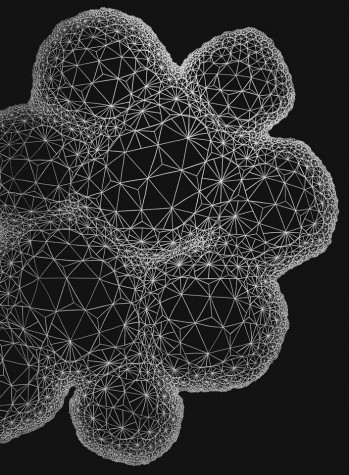 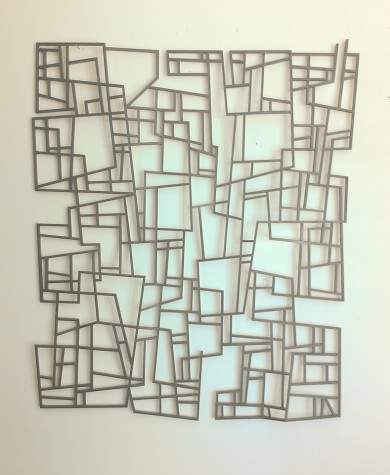 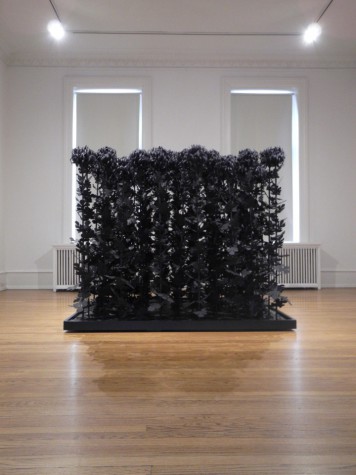 THE CANVAS – December 2014
By Jaime Thompson

Using two-dimensional drawing, linear sculpture, and large-scale installation, respectively, artists Clint Fulkerson, Leon Anderson, and Lauren Fensterstock explore the intersection of art and architecture. Their artworks engage viewers through traditionally architectural avenues such as geometry, structure, and scale in ways that move beyond mathematics and precision.
Clint Fulkerson: Fulkerson is most inspired by nature and technology. “I’m interested in how human culture seems separate from the natural world but is a product of it,” he says. “I look to nature for patterns that I can possibly reinterpret in drawing.” Fulkerson’s subtle geometric drawings seem to float off the page, with forms that evoke clouds, microscopic images, cacti, and spider webs. “I can draw purely 3D shapes, without illusions of depth, staying true to the flatness of the paper I’m using, but by making slight variations in angles and line lengths with a multitude of marks, I can create a sense of depth,” says Fulkerson. “It feels dishonest to create illusions of space on a picture plane, but I feel comfortable doing it with pure geometry.” His interest in geometry as it relates to “mapping, computer graphics, and Islamic mosaic tiling” imbues his works with layers of meaning, taking his art far beyond exercises in draftsmanship.
“Apart from trying to make art, I might be building sandcastles with my daughter or growing bean sprouts,” he says. “I go through cycles of production and inspiration.” He is often reenergized when he looks at his past works “and imagine gaps that need refilling.” Sometimes he will create many drawings in a short span of time, and then go for a bit without making any new art. But he is not idle during the lean times; he might discover new artists that inspire him or read a book that sparks different ideas before he returns to art making.
Fulkerson’s creative process is constantly evolving and shifting, encompassing many areas of his life. That freedom is evident in the organic shapes that populate his artwork. Case in point: the delicately drawn White Nebula #2, part of Fulkerson’s White Nebula series. Each of the pieces in the series “is the result of a gradual process of growth; it is a virtual organism,” notes Fulkerson. White Nebula #2 has exquisite texture, its gossamer lines like fragile lacework. The drawing’s beautiful simplicity acts as a kind of Rorschach test, in which viewers can find many interpretations and associations.
Leon Anderson: Anderson’s first encounter with art came at a very young age. He recalls his older brother following drawing lessons on a television program. Naturally, as a curious four-year-old, Anderson “wanted to do what my big brother was doing.” “It turned out that I was much better at it than him,” he says. “It was the first thing that I discovered I was good at, other than breaking the tips off fishing rods.” Anderson notes that growing up in Alaska in the 1950s didn’t expose him to much art. He remembered the first time he saw an “actual painting,” when he was 11. “It was a large Sydney Laurence landscape in the lobby of a bank in Fairbanks,” says Anderson. “I have to admit that it must have imprinted on me that that was what painting was, because from then on I wanted to be a landscape painter and make big paintings.”
Anderson has indeed built his career on making big landscape paintings. Recently, however, he has branched out into creating spare wooden sculptures, inspired by a series of drawings that he made. He limited himself to using straight horizontal and vertical lines. “Surprisingly, instead of feeling restricted by these limitations, I found it in fact to be quite freeing,” Anderson says. He wondered what the drawings would look like if they were dimensional, so he started building them. Although his paintings and constructions differ greatly in appearance, they are rooted in Anderson’s love of nature, and penchant for exploring patterns. “I love to be outdoors, and am fascinated by how nature organizes itself to create order out of chaos,” he says.
Chaos Theory 101 was inspired by a wild, overgrown garden, its unkempt state irresistible to Anderson. The sculpture’s myriad triangular, rectangular, and square shapes are slightly off-kilter. Tight groupings of smaller shapes are interspersed with larger areas of negative space, lending balance to the piece. With his sculptures, the artist also explores the interplay of light and shadow. Depending on lighting, the sculptures can appear flat, like drawings, or be thrown into sharp relief, with intriguing shadows adding to their depth.   Lauren Fensterstock: Fensterstock is a true maker, an artist deeply interested in the craft and committed to the tiny, but critical, details of her work. “I tend to spend time obsessing about very abstract ideas, and the act of making allows me to take the unknown and see it come to life in the palm of my hand,” she says. Fensterstock finds inspiration in history, often referencing specific historical styles and interpreting time-worn ideas with her own distinct élan. “It has been said that perhaps the only thing less predictable than the future is the past,” notes Fensterstock. “As our world changes, we see the past through an evolving lens. Past and present both continuously change and redefine one another.” Her recent work explores the dramatic changes in how humans perceive nature, specifically through gardens. “Every planned landscape reveals the particular philosophy of its maker and can be seen as an allegorical map to the world’s structure,” she says.

Kiku is an installation from her solo exhibition at the John Michael Kohler Art Center in Sheboygan, Wisconsin, which was shown from February to August 2013. The exhibition comprised four connected rooms, and each room represented a specific period of design. Kiku, which is the Japanese word for chrysanthemum, references the “ogiku, or single-stem, style, in which the kiku are trained into perfectly straight forms with a single enormous blossom on top,” explains Fensterstock. From afar, Kiku seems almost like a large “void,” as Fensterstock says, but upon closer inspection, the stunning details emerge. Fensterstock has created hundreds of thousands of tiny petals from black paper. “The form and material are physically similar to a living garden and yet, in their black tone, remain oddly unnatural,” she notes; similarly, in real- life kiku, natural forms are manipulated into rigidity. Fensterstock illuminates this contradiction, resulting in “an allegorical narrative that is at turns sinister, confusing, and seductive,” she says.