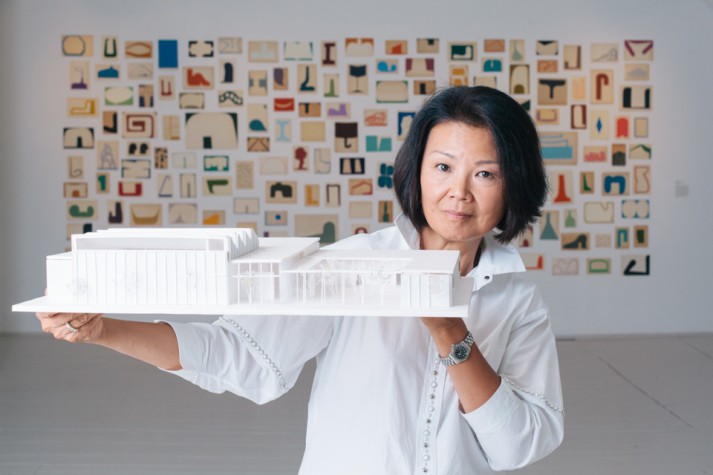 Artchitect Toshiko Mori standing in the original Center for Maine Contemporary Art in Rockport and holding a model of the new CMCA, which is slated to be built in Rockland. She is standing in front of Tom Burckhardt’s installation 173 Elements of a Painting, which was on view at the CMCA in the summer of 2014. 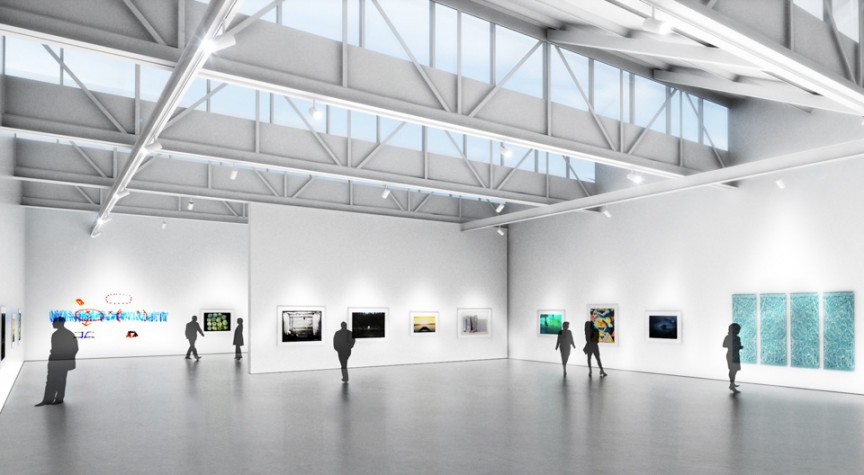 A view of the projected main exhibition gallery for the new CMCA (below) with a polished concrete floor and open steel structure. Natural daylight will filter through the clerestory windows.

A drawing of the exterior façade of the new Center for Maine Contemporary Art (left) with a view of the canopy and a courtyard that will be open to the public. A glass curtain wall will surround three sides of the courtyard. The building’s distinctive sawtooth roofline features four north-facing clerestory windows, which will allow natural light into the main exhibition space.

Sean Kelly, owner of Manhattan’s Sean Kelly Gallery, didn’t think he wanted his upstate New York house wrapped in sheets of aluminum foam recycled from tin cans. But he let himself be convinced. His architect, Toshiko Mori, had always wanted to use the material on an exterior, and Kelly liked the idea of giving Mori—who has made, in his words, “the most extraordinary buildings”—latitude for material choices. His own extraordinary home now reads as a glass volume on the ground floor with a cantilevered aluminum volume above. “Most people don’t survive their relationship with their architect or builder,” Kelly says, but he cherished his partnership with Mori and went on to become a repeat client. Mori later designed his Manhattan gallery and received a 2013 American Institute for Architecture (AIA) New York Chapter Design Honor Award in Interiors for her effort. She is in the process of designing a private gallery for Kelly’s personal art collection on his Columbia County property, as well.


Suzette McAvoy, the director of the Center for Maine Contemporary Art (CMCA), and her board looked at the new Sean Kelly Gallery when they were trying to decide who should design a building to replace the nineteenth-century livery stable in Rockport in which the CMCA is currently located. Since 1952 the CMCA has shown contemporary art by artists living in, or with a connection to, Maine. By 2013 McAvoy and her board had formulated the plan to relocate to a more visible space in Rockland that would be more conducive to showing contemporary art. Soon enough, McAvoy— who was the curator at Rockland’s Farnsworth Art Museum when Mori significantly renovated and expanded that space 20 years ago—joined Sean Kelly as a repeat client.
Mori’s credentials would impress anyone. A chaired professor at Harvard University’s Graduate School of Design, she is the principal in Manhattan’s Toshiko Mori Architect and has an international reputation, having designed many AIA-award-winning projects, as well as residences in the United States, Mongolia, and Taiwan and institutional and cultural projects such as the Syracuse Center of Excellence at Syracuse University and the Building for Environmental Research and Teaching at Brown University. As a socially engaged, environmentally sensitive architect who reinterprets modernism in a particularly interesting way, she has been chosen to lecture or participate in conferences around the world on topics such as scarcity-driven design, sustainability, and the future of urban environments. She has updated and added on to homes by signature twentieth-century modernists like Marcel Breuer, Paul Rudolph, and Frank Lloyd Wright.
Her credentials weren’t the only reason CMCA wanted Mori as its architect. Nor was it simply her familiarity with how best to hang a show, given her experience designing exhibitions for Cooper Hewitt, Smithsonian Design Museum, and the Museum of Modern Art. They wanted her for her connection to Maine, of which the Farnsworth Art Museum is only one small part.

Over 30 years ago Mori’s husband, artist Jamie Carpenter, was teaching at Haystack Mountain School of Crafts on Deer Isle. The painter Eric Hopkins picked the couple up on his boat and took them to North Haven for a visit. (Coincidentally, Mori’s first job after architecture school at Cooper Union was with Edward Larrabee Barnes, the architect responsible for Haystack’s famous design. What’s more, Mori first met Carpenter when he came to interview for a commission for a fountain outside Madison Avenue’s I.B.M. Building, also of Barnes’s design.) Mori and Carpenter’s North Haven visit with Hopkins lasted longer than they intended: they got fogged in on the island. One day, Hopkins’s mother, June, drove them around the island and pointed to a house. “That’s the perfect house for you,” she said. “It is a handyman’s special for young people with a lot of time and no money.” Mori and Carpenter agreed. They fell in love with the place and bought it soon after.

North Haven residents, even those who visit just in the summer, can’t help but be familiar with Rockland. The island ferry leaves from Rockland, and rough waters can mean an unplanned night or two in town. Over the years, Mori had seen Rockland transform—in no small part due to the engine of the renovated Farnsworth— from a city with barely any retail scene to a place with a Main Street full of shops, galleries, and restaurants. As such, she was uniquely positioned to design a new museum in dialogue both with the town in general and also with the Farnsworth and the Strand Theatre (with its art films, live performances, and lectures) in particular.

Mori’s personal style—her dress and speaking manner—tends to the elegant and reserved. But she quickly becomes voluble when speaking about design, her own or that of others. She’s circumspect about the four homes she’s designed in Maine and an upcoming project for Tomas Maier, the creative director of Bottega Veneta—she likes to respect her clients’ privacy—but she’s happy to talk about the design for the new CMCA.

Literature about Mori describes her work as driven by concept, not style, and as making unusual use of materials. What does this mean for the design of the new CMCA? “The biggest concept is the courtyard,” Mori says. “People will enter CMCA through a courtyard. There is a public portion of this entire enterprise, since CMCA shares an open space with the city.” The courtyard itself will be surrounded by glass, so even those who don’t enter the building can look in and see the corner of the gift shop, the main gallery, office spaces, and a lab classroom. “It’s a very clear organization, so people can see people studying art and viewing it. It’s very clear what’s happening behind the walls.”

McAvoy says, “You think of the old-style museums, and they present a formal, solid wall to the community.” You certainly can’t see inside most museums from the sidewalk. With CMCA, Mori says, the idea is “inclusiveness, transparency, and accessibility.” This sort of weaving of one institution to another and of private space to public space is of a piece with Mori’s interest in literal and metaphorical weaving in general. “What Toshiko has done with this design concept,” McAvoy says, “is integrate the industrial waterfront with the historic downtown.” This is evidenced in Mori’s choice of materials, as with the corrugated industrial metal that will be used for CMCA’s exterior walls. It’s an ordinary material, Mori says, familiar to people but detailed in a sophisticated way with stainless steel.

The new CMCA will have three gallery spaces, one bigger, one smaller, and one that is a flexible space that can be used as a performance space or lecture hall. Because Mori has experience installing exhibitions, she has a particular sensitivity to sight lines, the flow of the gallery space, layout, and lighting, but she is also aware of the less glamorous things, such as how the gallery spaces access storage and how to get art from the street into the galleries.

“Everywhere you travel, you remember the light,” Mori says. And the light in Maine is, of course, particularly beautiful. “I realized that in Rockland there is not a single place that really focuses and captures the quality of light.” The new CMCA design does this through its glass courtyard but also with a sawtooth roofline with north-facing clerestory windows. Picture a series of triangles where the vertical lines that are perpendicular to the ground are made of glass. Think, too, McAvoy says, of old textile buildings, where high lights are positioned to illuminate a workplace floor.

McAvoy says, “The quality of light that Toshiko speaks about is what attracts so many artists to Maine.” By the summer of 2016— the estimated date of the new CMCA’s completion—those artists’ rich body of work will have a home that is, in McAvoy’s words, as “of the present moment” as what’s inside of it. MH+D