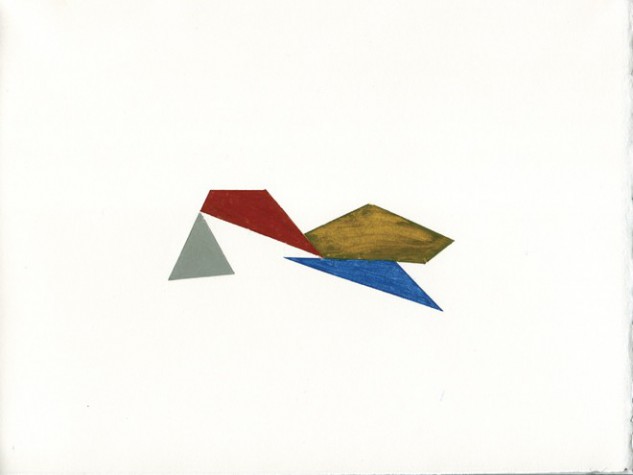 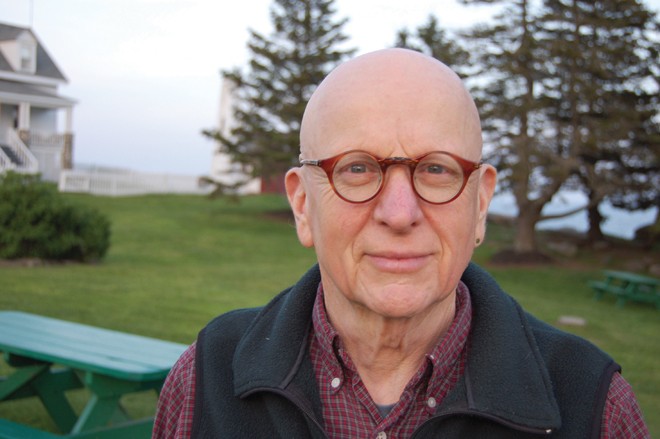 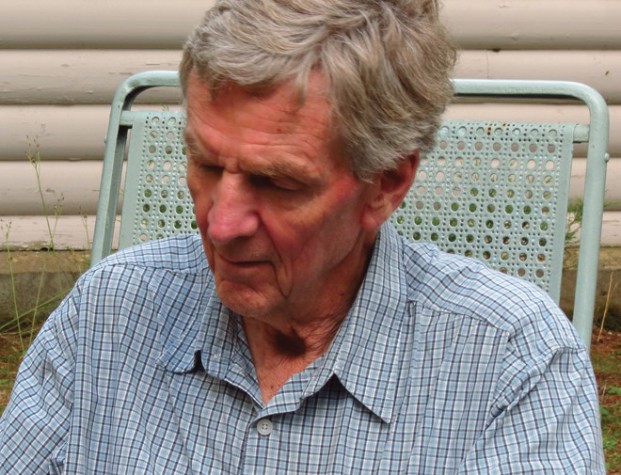 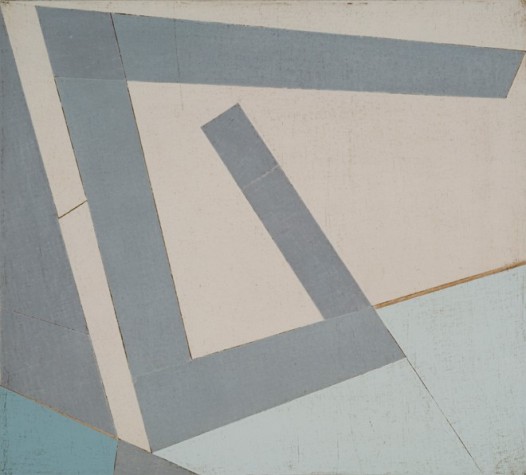 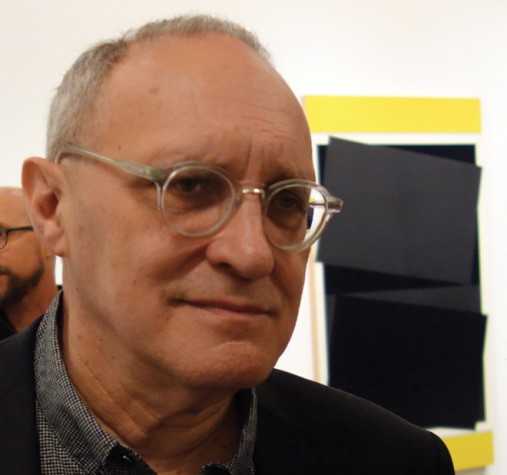 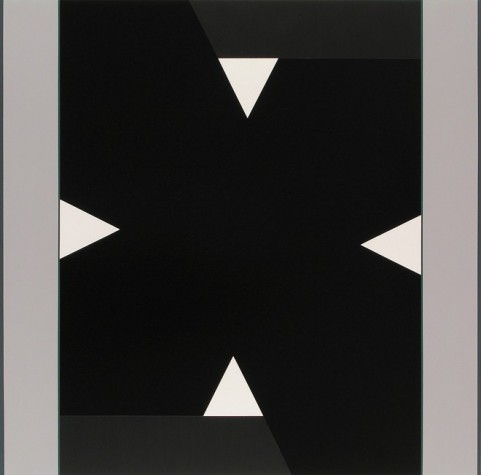 THE CANVAS – December 2013
By Britta Konau

Artists Ken Greenleaf, Duane Paluska, and Don Voisine create highly sophisticated two- and three-dimensional work that appeals to viewers’ perceptual understanding. Working with planes, angles, colors, and lines, their work is steeped in the tradition of geometric abstraction started by Russian artist Kazimir Malevich (1879–1935), whose 1915 painting Black Square revolutionized art’s possibilities. It is often at the points where the three artists’ formal elements join that forces of energy are strongest, calling attention to perceptual ambiguities.

A true “boomerang,” Ken Greenleaf grew up in Damariscotta and returned to Maine after having lived in New York for 20 years. He has had solo and group shows at various New York galleries, including Tibor de Nagy, and in 1994 participated in a two-person show at the Farnsworth Art Museum with Dozier Bell, who is now his wife. Recent shows include a 2012 solo at the Center for Maine Contemporary Art and group shows at the National Academy in New York and the Bottega Gallery in Kiev, Ukraine. When Greenleaf was living in New York in the 1970s and 1980s, his work was highlighted in writings by art historian and performance artist Laurie Anderson and poet John Ashbery and received additional critical attention in the New York Times, Artforum, ARTnews, and Art in America. Greenleaf’s work is in the collections of the Portland Museum of Art, Farnsworth Art Museum, Indianapolis Museum of Art, and the Whitney Museum of American Art, among others. Greenleaf also writes art criticism for the Portland Phoenix and Art New England. He is represented by Berry Campbell in New York.

Greenleaf was first introduced to making things by hand in the mid-1960s through an apprenticeship with a harpsichord maker. Later, fortuitously, he  assisted the sculptor Isaac Witkin, which in Greenleaf’s recollection “opened up a lot for me and set my artistic direction for a number of years.” Mass, scale, shapes, edges, color, and their interactions have since been the main focus of his work. Emphases have shifted over the decades, but these formal elements’ relationship to reality has remained at the core of Greenleaf’s investigation. The artist’s path of discovery has taken him from large-scale sculptures of metal, stone, and wood to intimate drawings on paper. Along with this move away from the sheer presence of mass toward more subtle statements, the viewer’s engagement has become increasingly important to Greenleaf. “It’s like a gift to see somebody else think,” says Greenleaf.

Since switching from three to two dimensions, Greenleaf has created distinct series of paintings and drawings to which he returns periodically. His paintings feature black geometrical forms on shaped canvases, suspending the shapes in a field of energy. The forms enter the viewer’s field of vision at unusual orientations, neither horizontal nor vertical; for their full impact they often also ask to be seen from the side to reveal the continuation of a shape. A series of linear charcoal drawings on collaged paper entitled Blackwork introduces an interesting tension between the suggestion of spatial layering and the flatness of the drawn lines themselves.

Greenleaf’s Gauge series, to which the illustrated piece belongs, is his first foray into sensitively chosen colors. Using oil pastel sticks, which add some texture to the drawings’ surfaces, trapezoids and triangles are arranged in intricate and resonant configurations of color and shape. Their interrelation introduces angles, intrusions, points of contact, and near-misses as the shapes precariously teeter or huddle into compact masses. There is a new joyfulness in this work, but also vulnerability and intimacy as interactions become concrete and transcendent at the same time. “I am aiming for a connection, a continuum of awareness between myself and the viewer,” says Greenleaf. Already well into his next series—paintings in shapes similar to the configurations in Gauge—Greenleaf continues to think like a sculptor, creating forms that invite not only perceptual and emotional engagement but also our movement in space.

Duane Paluska was born in Illinois. He earned a master of arts degree from Middlebury College in Vermont and a doctorate in English and American literature from Brandeis University in Waltham, Massachusetts. In 1967 he moved to Maine to teach English at Bowdoin College for five years. He began painting seriously in the early 1960s and has had solo shows at a number of museums and galleries in New England, such as the Mary Harriman Gallery in Boston and the McCoy Gallery at Merrimack College in North Andover, Massachusetts, in addition to a two-person show at the Center for Maine Contemporary Art in 2011. Paluska has participated in group shows throughout the Northeast and has been selected for the Portland Museum of Art’s Biennial twice (in 2003 and this year). His work is in the collections of the Portland Museum of Art, Bowdoin College Museum of Art, the deCordova Sculpture Park and Museum, and Merrimack College. Paluska is the founder and director of Icon Contemporary Art in Brunswick, Maine’s only gallery to focus exclusively on abstract art, both his own work and that of others. He is also represented by the June Fitzpatrick Gallery in Portland.

Paluska says that he learned about putting things together as a carpenter building houses during high school summer breaks. He continues, “When left to my own devices I gravitated toward woodworking and painting,” even while teaching English. Having received little formal art training, Paluska describes his process in his charming, self-deprecating way as “trial and error, lots of error, still.”

In fact, he is a highly skilled, disciplined, and forever curious artist, furniture designer and builder, and home designer and builder, and his practice is increasingly weighted toward the creation of sculptures and paintings. Initially, Paluska’s wooden sculpture deconstructed the relationships of furniture’s constitutive elements to dizzying effect. More recent smaller, angular tabletop sculptures traverse space as line, heading in unexpected directions and ending at odd angles, while enlivening the space they enclose and inhabit. Some of these pieces are covered with canvas and painted in rich colors and patinas, which connects them to Paluska’s paintings that, curiously, engage positive and negative spaces like sculptures do. Their forms are pieced together of canvas of varying density and texture and painted lightly so that the weave remains visible. Rich in dynamic tension, Pliers combines a dizzying array of directions and planes, alignments and angles, without ever resolving the perceptual conundrum of figure and ground.

Even in these spatially disorienting two-dimensional works Paluska uses joinery reminiscent of furniture making, as he applies his standard of meticulousness to all of his work. He uses the same formal language for both paintings and sculptures, with some of the former responding to the latter. “But I’m also trying to hide the sculpture in the paintings, creating ambiguous, contradictory spaces that expose and conceal at the same time,” Paluska explains. In a soulful way he plays with viewers’ visual expectations, keeping us on edge so that we never make assumptions but rather engage in seeing what is actually there. The formal restraint of Paluska’s work is thus suffused with a certain warmth and sensuousness. “It’s important that there is emotion in my work, like an electrical charge, but I don’t want it to hit you in the face,” he says.

Born in Fort Kent at the northern end of Maine, Don Voisine has been living in New York since 1976. After attending the Portland School of Art (PSA, now Maine College of Art) for a short while in the early 1970s, he switched to the Concept Center for Visual Studies, a short-lived program that broke away from the PSA. Many years later, in 2000, Voisine was awarded an honorary BFA from the Maine College of Art. The artist has had solo shows in galleries throughout the country, and in 2013 alone his work has been included in group shows at the National Academy Museum in New York, the Crocker Art Museum in Sacramento, and galleries in Vienna, Paris, and Berlin. Since 1997 Voisine has been a member, and for many years president, of American Abstract Artists, an artist-run organization founded in 1936. In 2010 he was elected to lifetime membership in the National Academy of Design. Among the museums that collect Voisine’s work are the Portland Museum of Art, the Corcoran Gallery of Art, and the National Academy Museum. Voisine is represented by Icon Contemporary Art in Brunswick, McKenzie Fine Art in New York, Gregory Lind Gallery in San Francisco, Alejandra von Hartz Gallery in Miami, and dr. julius I ap in Berlin, Germany.

Voisine credits his early employment painting apartments with giving him a sense of a room as architecture, as a space with boundaries, points of entry, and vistas beyond. It’s not surprising, then, that in 1980 he began using floor plans of places he worked or lived in as starting points for his paintings, thus grounding his abstractions in largely concealed reality and subject matter. Creating visual space has remained a central concern in Voisine’s work.

The artist uses a relatively stable set of formal elements for his paintings. “Once I set myself limits, I found more freedom,” Voisine explains. Each work’s central area features black hard-edged forms, like irregularly shaped rectangles and cross-like shapes, in various configurations against a white background. This motif is either symmetrical or nearly so, and is always bracketed by a band of color with thin stripes of additional colors running alongside it. Although the paintings appear to be simple, they have a powerfully complex effect. With so much black around, colors simply pop. The surface of that very black changes from matte to glossy in clearly delineated areas, suggesting advancement or recession relative to the picture plane, and can incorporate reflections into the image itself. Additionally, the black and white shapes continuously oscillate between absences and presences, negative and positive spaces, allowing for spatial openness and even confusion happening at the edges, where one shape, color, or surface connects to another, where illusion and the thwarting of it takes place. Voisine explains this tension as follows: “I try to bring space into this, not illusionistic space, but depth, and a sense that the viewer can enter that space.”

The near-monochromatic Dub Stride is activated by the alternating rhythm of lively black and white shapes and wide bands of gray that calm and ground the composition. Much of the painting’s intrigue derives from the fact that two arms of the black cross overstep the dark gray boundary, as if entering a space closer to the viewer, and we expect a certain torquing of the shape as a whole. However, there is no indication of that, no distortion; all is flat. These visual surprises in Voisine’s paintings depend on our viewing memory and perceptual phenomena happening in our heads, when all we are looking at are subtle differences in color, shape, and surface.