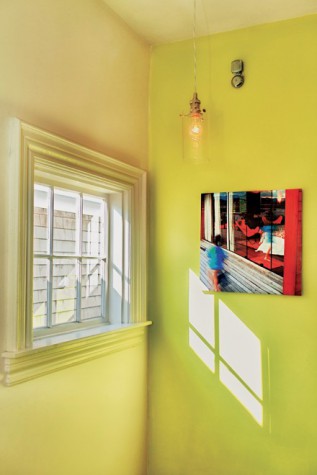 The landing at the top of the stairs to Rosa’s office at A4 Architects in Bar Harbor. The photo on the wall shows a little boy (the Rosas’ youngest son at their home in Brazil) darting between interior and exterior spaces. 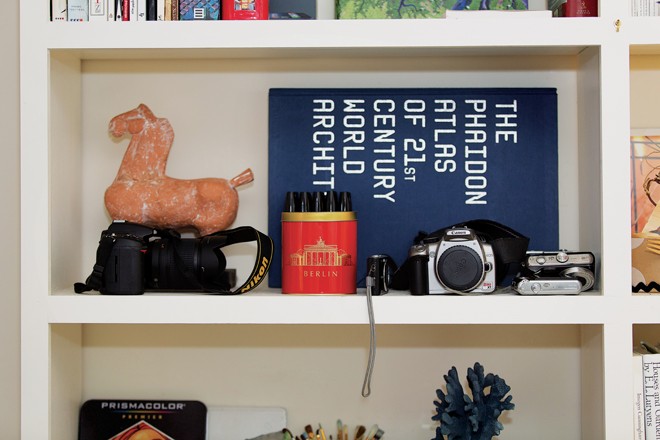 A book shelf in Rosa’s office. The horse sculpture is “gaucho art” from Brazil, while the camera and large architectural “bible” signal Rosa’s other interests. 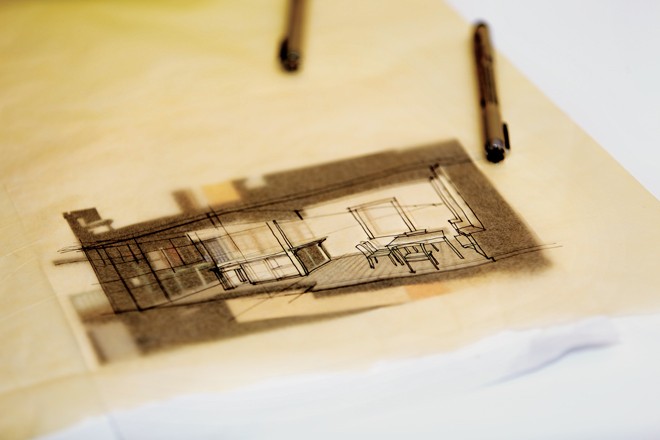 A sketch of a kitchen A4 Architects is renovating/designing for a house in Bar Harbor village. Rosa brings an artistic understanding to the firm’s practice and the ability to translate the client’s idea into beautiful hand-drawn sketches. 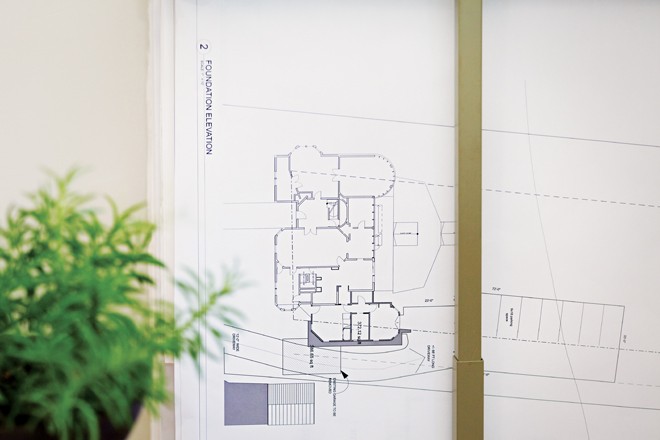 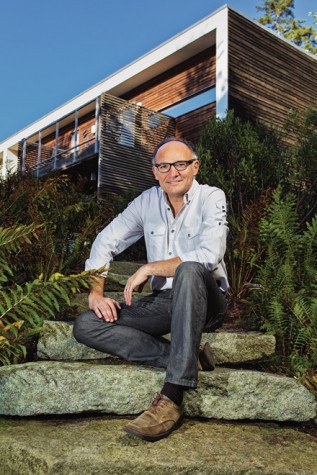 Augusto Rosa outside the Thomas Bay House on Mount Desert Island. The client asked A4 Architects to build a guesthouse while they worked on the “big” house. Ten years later, plans for the big house have been scrapped and the client loves living in the guesthouse. 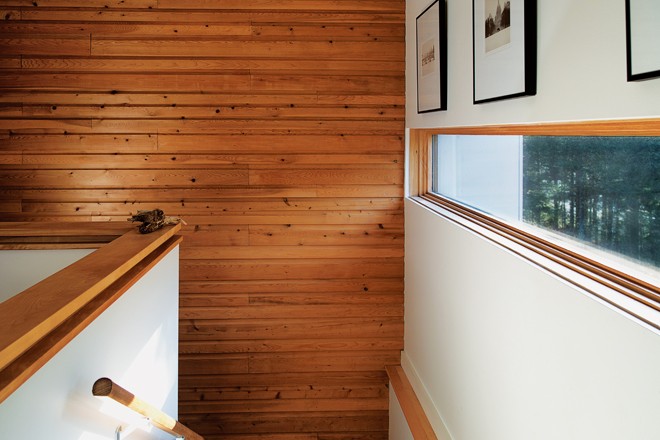 An interior detail in the Thomas Bay House on Mount Desert Island. Rosa’s narrow, eye-level window is a feature not only in the stairwell but also in place of a backsplash above the kitchen sink where it awards a focused view of the treetops outside. “Why look at tiles?” Rosa asks.

Augusto Rosa on shaping spaces from within

Augusto Rosa sits across from me in the A4 Architects space he shares with his wife, Kay Stevens-Rosa, in Bar Harbor, gesticulating—some might say—like the Brazilian he is. “I say 21 winters, not 21 years,” he laughs, referring to how long he’s lived in Maine. It’s a long way from Porto Alegre, the southern Brazilian city where he grew up. Above the desk in his office is a picture in the brilliant blue and sunlit tones of Ferrugem Beach on Brazil’s Atlantic coast, where he has kept a home for over 40 years. “So beautiful,” he says.

Beautiful, too, are the houses he and Stevens-Rosa design and renovate around and near Mount Desert Island. Although both are architects (Stevens-Rosa is licensed in Maine, and he in Brazil and Europe), Rosa has shifted more to the interior design aspect of their work. “When I was trained as an architect in Brazil,” he explains, “we were schooled in all aspects of structural design, including the interiors, their colors and textures. I was surprised when I came to this country to see the dichotomy between interior and exterior space. I’m an integrated guy!”

He is also multitalented. With degrees in architecture, historic preservation and intervention, and urbanism, Rosa brings special depth to the practice. “I’m lucky,” he says. “I graduated from architecture school, and at 23, I was already working on projects in Porto Alegre: skyscrapers, houses, banks. Inside. Outside.” One night he overheard a colleague talking about the exciting capital improvement program underway in Barcelona, which would host the 1992 Summer Olympic Games. “It was amazing,” Rosa says now. “Did I want to go? Of course!” In Barcelona he was exposed to the significant Catalan design movement modernisme, and he met Kay, who had also been drawn to the architectural opportunities there. When the Olympic building boom ended in the early ’90s, the Rosas had a young son and not much work. “It was either back to Brazil, where things weren’t going so well, or home to Kay’s Maine.” Thus the 21 winters. They’ve been here ever since, bringing a true cross-cultural approach to their firm, as well as raising what are now four children; the eldest is back in Spain for his education.

Rosa is reluctant to blow his own interior design horn. At the same time, he concedes he brings an unusual international experience and tradition to Maine. It’s interesting to note that neither South America nor Barcelona of the 1990s is Old World in the European sense. Each manifests a singular emergence from dramatic geography (the jungles, the pampas, the Pyrenees). We see something similar in coastal Maine: the age-old wash of the sea upon the eons-old stone of the shore.

Within this transcendent landscape, Rosa is a shaper of space and, in turn, of the people who enter it. “A space needs to embrace you as an experience on the first encounter. One can have a good or awkward first impression, but you belong to that situation and experience,” says Rosa. “Think about agoraphobia or coziness. As a supposed ‘manipulator’ or creator of spaces, I like the challenge of controlling the destiny of the experience—big, small, open, or closed. A space speaks to you and seeks a dialogue back through your experience of it.”

Rosa’s approach to interior design is grounded in his own experiences of what the philosopher Gaston Bachelard called the “intimate intensity” of domestic space. During a long-ago architecture class in the Spanish Pyrenees, Rosa visited medieval farm compounds. One of them featured a tall tower surrounded by low stone buildings “arranged to the landscape lines” for the animals. The tower, where the farmers had lived, was “a square, simple structure, also in stone, domesticated by a hip roof.” Each of its five stories had its own function. Entering the tower, Rosa at first felt claustrophobic, but then looked out one of the small windows. “I was completely fixated and hypnotized by the framed landscape.  I was part of it, but as a spectator, like looking at a piece of art,” an artwork, says Rosa, that was constantly changing with the day’s light. Instead of confining, the tower began to seem cozy. It was this space, Rosa says, that “gave me the experience of understanding the power of a dialogue between interior and exterior.”

Rosa’s background enables him to work on exterior and interior spaces together. “When I’m practicing architecture, it is almost impossible for me to design a space without thinking of its possibilities as to house furnishings. It is not only about the light and shadow playing with volumes, but also where you will be sitting or passing by to enjoy it, which art on which wall will create the right exchange between art and viewer.” Each of the architect’s decisions changes the field for the interior designer, and vice versa. He pauses. “I am fascinated by the use of walls, stairs, art, furniture, light, shadows, and humans as important or essential elements to create a narrative and a visual dialogue.” In fact, Rosa practices something that is more like interior architecture than interior decoration. “It feels good to get an empty space with white walls and to start to architect the narrative of this interior. Such walls look to me not only as surfaces but also as elements with layers, structure, and dimension, all ready to be part of a bigger play. Simply to decorate is not to design.” Big smile. “Decorating only feels like it gives a superficial look to a space, like makeup. I want to give it a voice and a personality, not only good looks.”