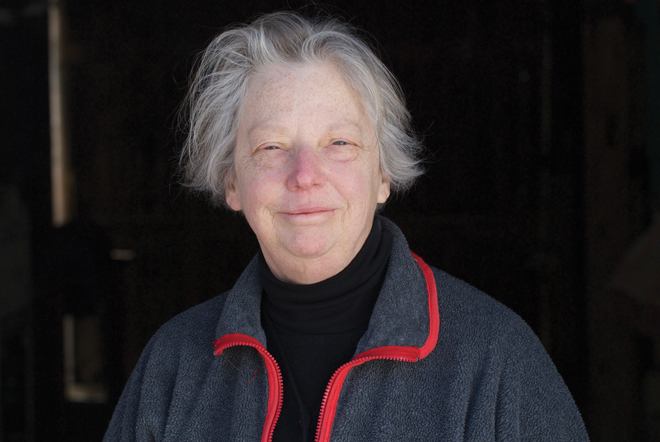 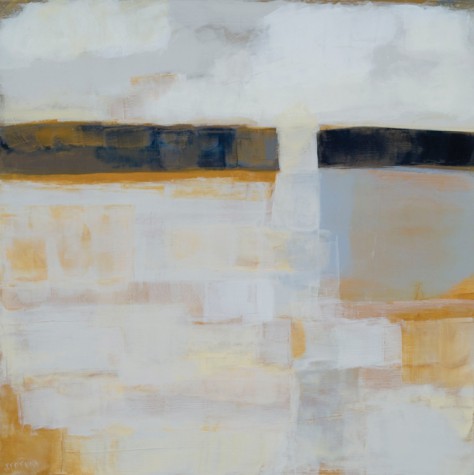 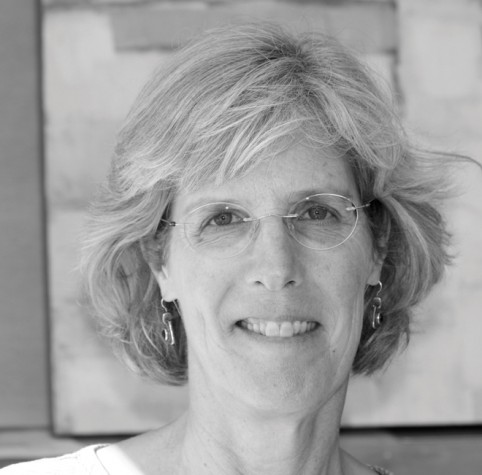 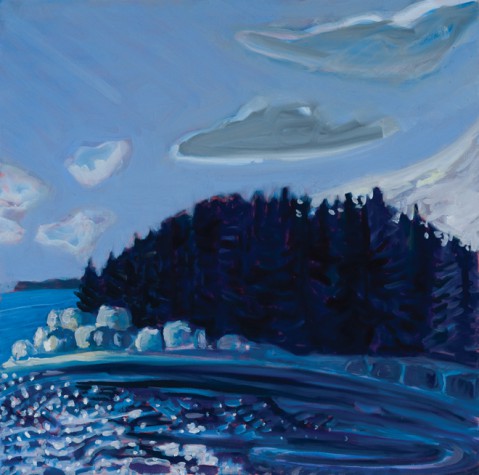 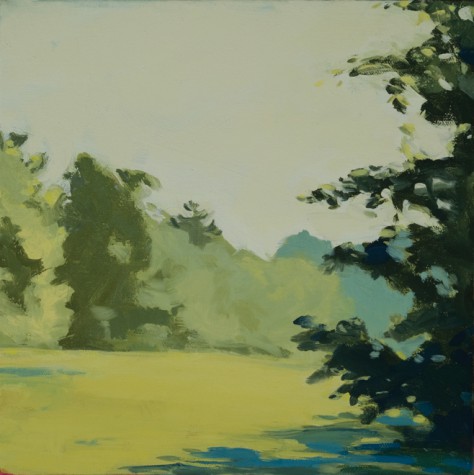 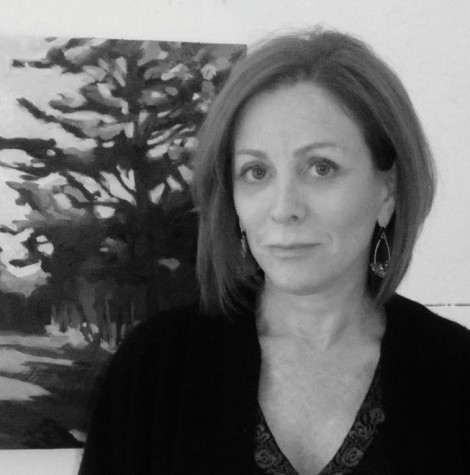 Artists Anne Ireland, Brita Holmquist, and Julie Freund use a gestural approach to abstracting the landscapes they paint.

The degree to which natural forms become shapes of color varies from artist to artist; however, they all pay close attention to atmospheric nuances. Their paintings beautifully and accurately reflect how the directional power of the wind, the haze of a humid day, or the sun glinting on the surface of water affect the environment and what we see.

Anne Ireland grew up near New York City, and after graduating from Bowdoin College, she returned to become an associate producer for CBS News. Having drawn and painted since childhood, Ireland took courses at the Brooklyn Museum of Art. After moving to Maine in 1985, she attended the Maine College of Art. She has had solo and group shows all over Maine, and in 2010 her work graced the cover of L.L.Bean’s spring catalogue. In 2012 she was awarded an artist’s residency at the Studios of Key West, Florida. Ireland’s work is represented by Gleason Fine Art in Portland and Boothbay Harbor, Thos. Moser in Freeport, and the Flat Iron Gallery in Portland.

From childhood on, Ireland has been spending every summer at her family’s 200-year-old saltwater farm in West Bath. The experience of Maine as a place of release and freedom has remained with her even now that she lives here year-round. Hay fields, pine trees, and the constantly changing water and sky are her most intensely experienced subjects. “My work is informed by the feeling of magic and mystery that I still feel in this place—like it always invites me in,” says Ireland.

“My familiarity with my surroundings allows me to invent and express with color what I am feeling about my subject or myself,” Ireland explains. Removing the particulars of a place and instead describing a more iconic landscape, the artist nevertheless retains intimations of specific atmospheric conditions. Paintings’ titles often refer to a particular season or month, or a certain weather or light condition, reflecting an essential feeling tied to the scene at that particular moment. Although Heat Haze depicts a hot summer day, its cool greens and blues suggest the artist’s state of contentment as she was sitting in the shade. The trees are reduced to summary shapes built up with feathery brushstrokes, and large expanses of color evoke grass and hazy sky. Painted in the studio after gouache and oil pastel sketches, it retains the feeling of a study in its expressive focus and tendency toward abstraction.

When exploring a subject, Ireland engages in a layering of colors until she has arrived at a combination of hues that evoke the atmosphere or emotion inspired by the scene. In this progression away from description toward expressiveness, Ireland’s vibrant paintings acquire a degree of independence from their subjects and become “a place to hang my paint, my marks, my color on.”

Brita Holmquist was born in New York City into a multigenerational family of artists and collectors. She attended the Moore College of Art and Design in Philadelphia and has shown her work in galleries and museums throughout New England and Pennsylvania. The Portland Museum of Art and the Farnsworth Art Museum have collected Holmquist’s work. In 1989 Holmquist cofounded 10×10, an artists’ group that held annual shows of 10 artists contributing 10 pieces each. Since 2005 she has organized an annual artists’ retreat at Long Ledge, her family’s home on Islesboro. Holmquist’s work has been featured in numerous publications on Maine art and has been the topic of many articles in newspapers and magazines including American Art Review, Art New England, and the 2012 Art Issue of Maine Home+Design. She is represented by Elizabeth Moss Galleries in Falmouth, Art House Picture Frames in Portland, and Camden Falls Gallery in Camden.

Since she was eight days old Holmquist has spent every summer at Long Ledge. Her artwork displays great familiarity with Maine’s varied shoreline along the coast and islands and a deep attunement to the effects the elements have on natural phenomena. With sweeping lines and dynamically abstracted shapes, the artist captures how the movement of water, wind, and sun affects colors and surfaces. Ripples, currents, and waves of water, crowds, dances, and chases of clouds, and glints of light and pockets of shadow populate and animate her landscapes.

Holmquist mostly works from her boat in Penobscot Bay. She uses oil on canvas and oil pastels on paper with colored pencil, finishing the pieces later in the studio. For the titles of many of her works Holmquist gives specific locations and atmospheric conditions. “I try not to lie about where I am,” she says. Light Collecting East of Great Spruce Head Island was painted two years ago, early one morning in the fall. The artist had been on the water for about 45 minutes when she encountered “these little fat clouds scuttling along,” as she describes it. “I was looking south and just loved the light coming up from the east.” The overall blue palette of Light Collecting East of Great Spruce Head Island conveys the ubiquity of water affecting everything in its vicinity. This impression of lively interconnectedness is intensified by the sweeping dynamism of the composition and every element in it.

Julie Freund grew up in Pennsylvania and studied photography at the Maine Photographic Workshops (now Maine Media Workshops and College) and the Portland School of Art (now Maine College of Art). She has had many solo shows and has participated in numerous group shows in galleries throughout Maine. Her work is held in private collections in Maine, Massachusetts, Pennsylvania, Florida, and California. Freund is represented by Elizabeth Moss Galleries in Falmouth and Thos. Moser in Freeport.

Freund feels strongly drawn to Maine’s shoreline, returning repeatedly to a handful of special places for inspiration. Islands in particular offer her many-layered tensions between solidity and fluidity, as well as a singular range of shapes, colors, and light nuances. “Living in Freeport, I see the islands every day; they have become a part of my visual language,” Freund explains.

Working on-site, she creates pastel sketches on paper prepared with a colored ground of gouache. “I am interested in capturing my emotional response to light and color,” says Freund. The pastels can become finished works of art in themselves or may later be reworked as paintings in the studio. What kind of support the artist uses for her paintings, whether paper, panel, or canvas, is determined by the level of fluidity and detail she desires. Using broad brushes and color shapers, which have variously formed rubber tips, Freund lays down and scrapes off shape-defining areas of color. Broad, horizontal patches of paint flicker like sunlight on water. Horizontal bands of darker color evoke islands on the horizon. In Multiples, the landforms are unspecified yet very real presences.

Freund’s background in photography still informs her painting. “It is part of the foundation of my work as I look for a composition and zoom in on particular aspects of a landscape,” says Freund. She also creates collages in her studio, using handmade paper in combination with gouache and acrylic paint. Additionally, studying and practicing landscape design has strengthened her leaning toward abstraction. “But applying paint is what I truly enjoy,” the artist admits.