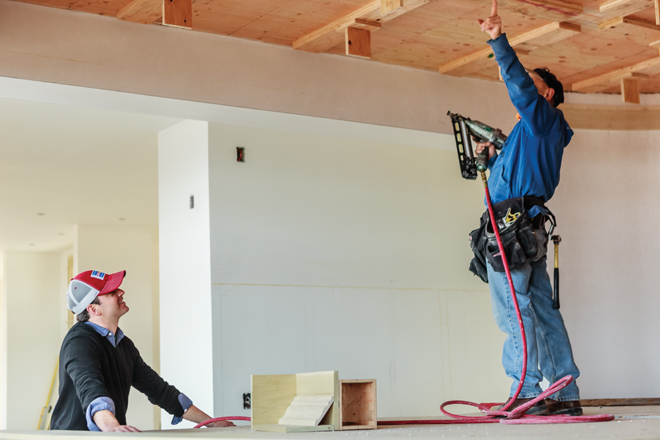 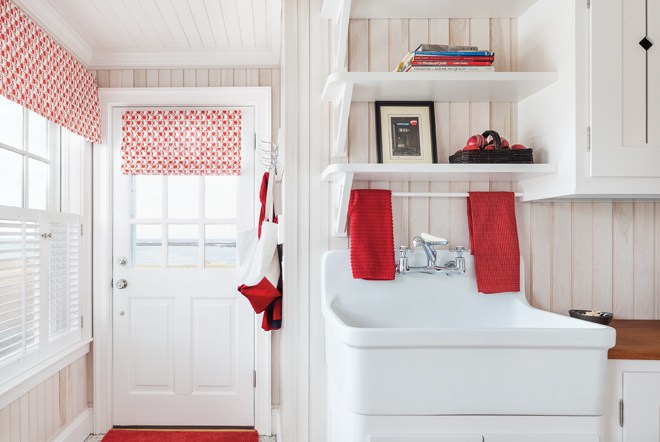 Red window treatments and accents make a striking statement in this sunny combination laundry room and mudroom in Cape Porpoise. 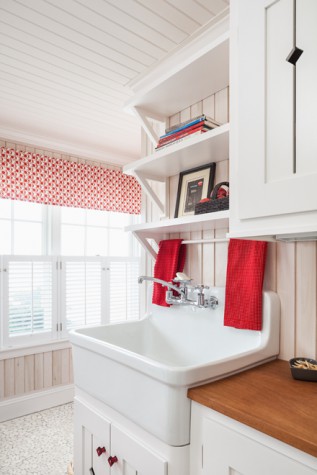 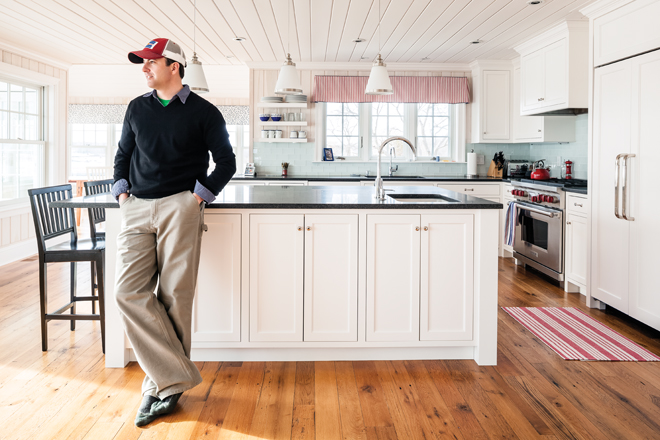 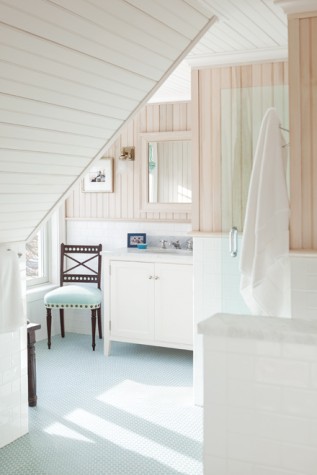 Pale blue circular tiles reflect the oceanfront vista in a guest bathroom, while the eye-catching geometric relief on a period dressing-table chair adds both elegance and whimsy. 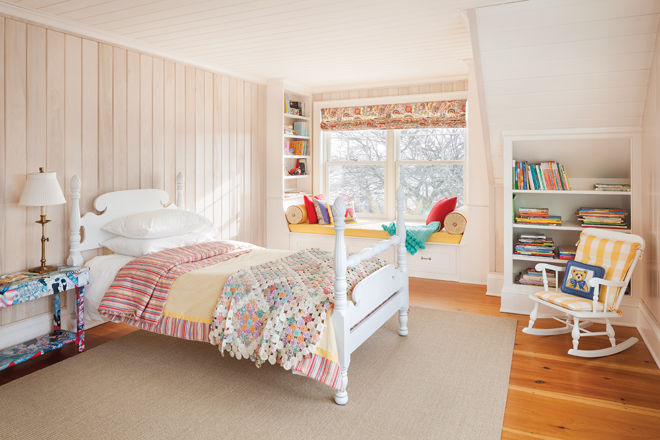 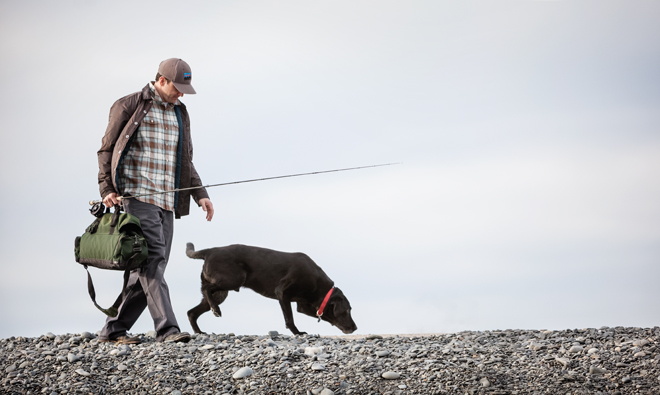 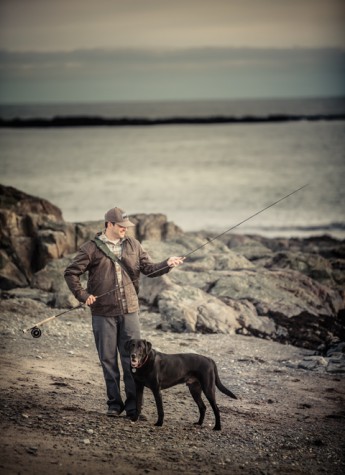 Geoff Bowley and Cash prepare for some fly-fishing at Rocky Beach in Kennebunk.

Geoffrey Bowley has no trouble remembering the day he started work at the family business: it was Monday, September 10, 2001. “To say that week was surreal doesn’t begin to describe it,” Geoff recalls. More than 10 years after that unsettled beginning, Bowley has effectively assumed leadership of Bowley Builders, the Kennebunk custom home-building firm his parents, Steve and Maureen Bowley, founded in 1972. Steve is a native Mainer, born and raised in Kennebunk. Shortly after graduating from the University of Maine, Steve and his new bride took out papers to incorporate Bowley Builders, whose portfolio now reflects 40 years of assiduous work, and includes some of the most impressive homes and estates on the southern Maine coast. While Steve and Maureen remain principals, and Maureen continues to work as the firm’s comptroller, the couple is quick to give credit to Geoff for his leadership role in the company today.

It wasn’t always apparent that Geoff Bowley would come into the family business. His parents didn’t try to influence this choice by any of their offspring. Geoff is the middle child in a family of three. His elder sister works out of Kennebunk as New England sales manager for a national corporation, and his younger brother is a chief resident in neurology at a hospital in Boston. Like his father, Geoff was born and raised in Kennebunk. He graduated from Kennebunk High School and attended Washington and Lee University in Lexington, Virginia, where he studied liberal arts and majored in English literature. He spent a year in Glasgow studying English. One teacher in particular encouraged his writing, and at one time, Bowley entertained the idea of attending the prestigious Iowa Writers’ Workshop. After graduation, Bowley moved to Massachusetts. He lived in Brookline and South Boston and worked for a public relations firm in Andover, cultivating clients in the high-tech industries sprouting up along the Interstate 495 corridor. After a couple of years, Bowley observed that most of his young Boston-area colleagues were striving in their corporate jobs just so they could spend one week’s vacation a year—in Maine. The irony wasn’t lost on Bowley. “I didn’t come back because I was expected to,” Geoff explains. “I came back because it felt right to me.”

Bowley is a youthful 36, with an engagingly modest demeanor. He plays in regional soccer leagues and is a passionate fly fisherman, both on Maine’s rivers and on the beach, where he surf-casts for stripers. Thoughtful and deliberative in his comments, it is not surprising Bowley sees his primary role in the company as a communicator. “In our business, you’re dealing with two of the most important elements in a person’s life: their family and their money. I’m very respectful of that.” He fully recognizes that all of his clients have experience and skills in other businesses and disciplines, and makes every effort to listen and respond to their ideas and learn from their areas of expertise. Richard Szuch, a New Jersey–based client, hired Bowley Builders to construct his home in Cape Porpoise. “Geoff is a very unusual young man,” Szuch says. “He uses his undergraduate degree in English well, oddly enough, in construction. His facility with language and communication meant no misunderstandings, not one.”

In my conversation with Szuch, Geoff’s career path provokes discussion of the recent wave of national pragmatism that has consumers and educators alike scrutinizing the value of a costly liberal arts education, measured against the demands of the current job market. Why should we study the great books, poetry, philosophy, or history, they ask, when what we need to earn a living wage is expertise in IT, global finance, engineering, or medical technologies? Client Szuch says that, while the workmanship and final product were exemplary, he most appreciated Bowley’s thoughtful manner. “Geoff really listens. He hears and considers what the client wants,” Szuch says. “His parents gave him a wonderful upbringing, but he is also exceptional in his own right. His education, his ability to think and articulate give him a real leg up in business.” Chalk one up for the English department.

Having grown up with the family business, Geoff Bowley takes very seriously his stewardship of the firm his parents built “out of the ether” and the role he’s chosen to play in its future. Working primarily on the southern Maine coast, Bowley thinks the company is presently at a good size for staying focused and ensuring quality control. “Good builders do that. We don’t want to overreach or dilute the quality of what we do.” Nor does he have any interest in micromanaging or, in his words, “micro-building.” “My job isn’t to know how to play all the instruments,” he says, “but to be more like the conductor—making sure all the parts come together as skillfully and smoothly as we can make them.”

Bowley recalls the family’s three or four moves, all within Kennebunk, when he and his siblings were growing up. “My parents worked every free minute on their current home project. They were tenacious about building sweat equity,” Bowley recalls.  It made an impression on Bowley, and he too seems bitten by the renovation bug, having recently finished refurbishing a classic small Cape on a cul-de-sac in Kennebunk, where he lives with his black lab, Cash, and his orderly bookshelves of English literature. A sketch of Ernest Hemingway hangs in his study. He’d like to take on another home renovation soon—maybe a duplex.

I asked Bowley about changes in home design and styles he’s witnessed over his years of custom home building in the area. Bowley says he is happy to see some movement toward more modern lines and perspectives. “For the past 10 years, we primarily built traditional shingle-style homes with cottage-style interiors. We’re seeing some more innovative architecture now—clean, geometric lines and shapes; bolder designs, materials, and finishes.” Geoff says he learned a lot just driving around with his Dad pointing out building features over the years. “My father has a great eye for scale and proportion,” Bowley says. “He knows what works.” Bowley also acknowledges that much of the past decade was about resale, which led homeowners to play it safe, making very conservative choices. “I think there is a way to incorporate unique and cost-effective designs that can bring more personality into a home, without slashing thousands of dollars off the bottom line if someone decides to sell in 10 years,” Bowley says. “Like everything else, it requires a bit of balance and a willingness to move away from what people envision ‘a house on the coast of Maine’ is supposed to look like.”

Bowley spearheaded renovations of the company’s headquarters, located in an unassuming office complex behind a lighting store on Route 1. The office suite, like his own home, suggests Bowley himself has a keen eye for this evolving aesthetic. Graceful Asian-inspired lines blend with spare Craftsman finishes in natural materials. The walls glow with rich color—a deep pond-lily green, a warm mango gold.  Simple but whimsical accents and artwork add to the clean, modern feel, which is welcoming and comfortable. I compliment the senior Bowleys on their attractive offices. As if on cue, they both raise their hands and shrug—“it’s all Geoff,” they say almost in unison.