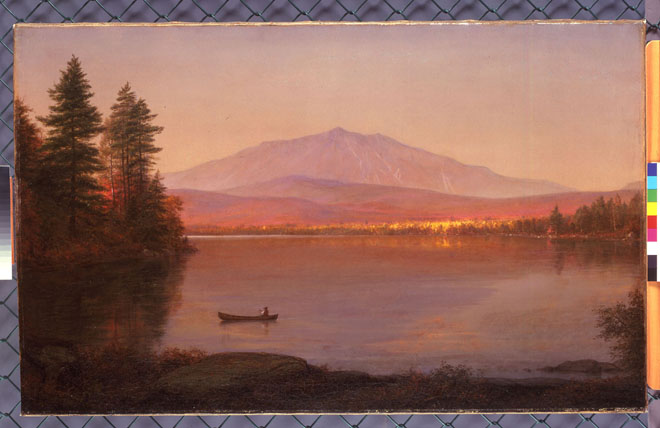 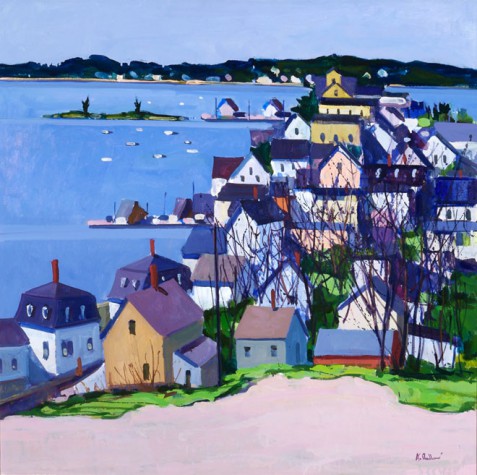 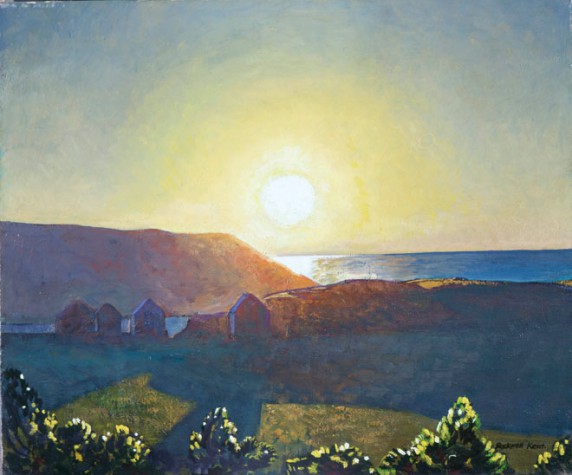 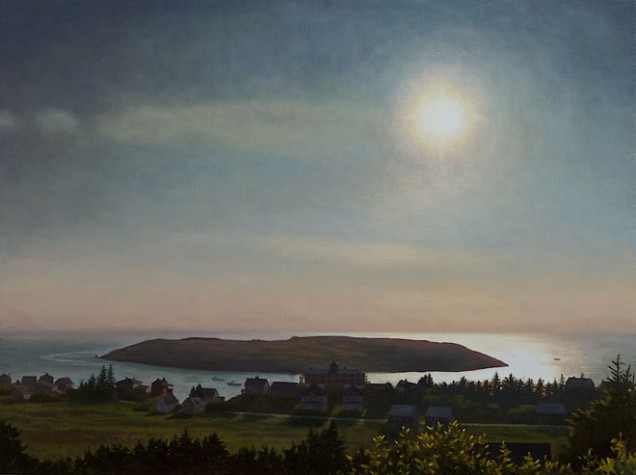 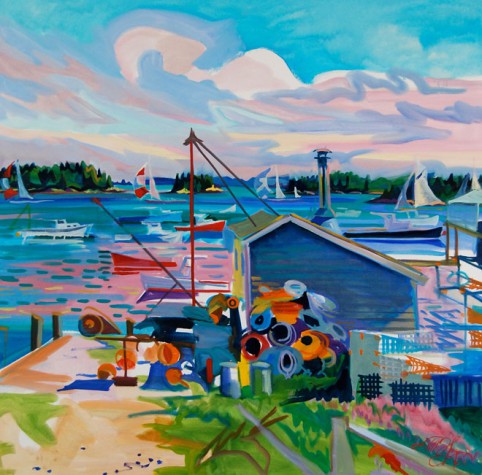 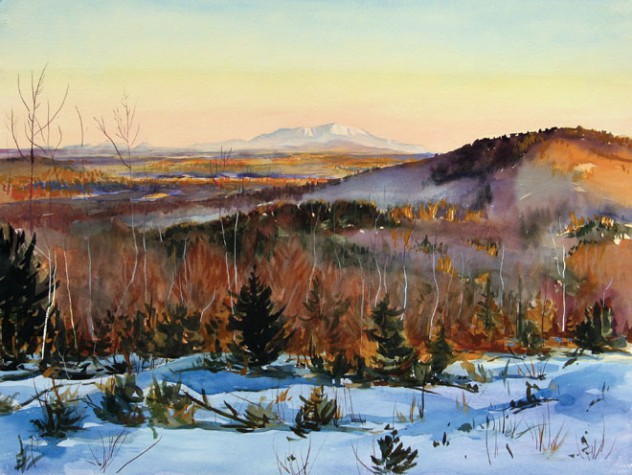 These icons of the Maine landscape cast a special spell on their artist admirers.

How does a particular place compel generations of painters to apply brush to canvas? The answer is evident in the grandeur of Mount Katahdin, Monhegan Island’s bold contours, and the sparkling expanse of Stonington harbor.

These three places have held many an artist in thrall by their special scenic qualities. Upon their discovery, an imprinting takes place that ties the individual artist to the specifics of the landscape. The artists find their muse, and that muse—mountain, island, waterfront—woos them.

To highlight this holding power, consider the following artists who have experienced long-term relationships with these three places in Maine. Their images underscore the iconic status of their subjects as they illustrate the intimate ties that bind painter to place.

The great Hudson River School painter Frederic Edwin Church (1826–1900) made his first trip to Maine’s north woods in 1852; he took his last in 1895. In the nearly half-century interval Church made numerous visits to the Katahdin region and even purchased a property on Millinocket Lake in 1878 so that he could spend extended time in the wilderness.

Mount Katahdin from Millinocket Camp (1895) represents a kind of curtain call to Church’s performance in the north woods. He presented the painting to his wife, Isabel, on her 59th birthday, with a note that read in part, “I am happy in the belief that owing to your generous, unselfish, and cheerful nature the Autumn of your life will be beautiful in its brightness and color.”

This sentiment makes a lovely accompaniment to the glowing canvas with its lone canoeist paddling the still lake waters. In its current home in the Portland Museum of Art, the painting evokes not only Church’s love for his wife but also the devotion of philanthropist Elizabeth Noyce to the state. Owen and Anna Wells gave the painting to the museum in Noyce’s memory so that it could be shared with the people of Maine.

Since Church’s time, Katahdin has attracted a multitude of landscape painters to its mighty flanks. As showcased in the new book The Art of Katahdin by David Little, the mountain and surrounding Baxter State Park are experiencing a flourishing of artistic activity. Painters of many different aesthetic stripes are finding their way north.

Painter and North Light Gallery owner Marsha Donahue is at the forefront of this vibrant flowering. A Maine College of Art graduate and seasoned art dealer (she worked for Bayview and Greenhut Galleries in Portland before establishing her gallery in Millinocket in 2004), Donahue is among Maine’s preeminent watercolor painters.

A recent commission, Katahdin Lights, depicts the mountain as viewed from 50 miles away, from the Granite Street Bridge on the road to Ellsworth. Even at such a distance the mighty snow-covered mountain draws the eye northward across the bright winter landscape.

The Katahdin region provides Donahue with more than a livelihood: she finds spiritual sustenance in the woods, rivers, and mountains. The mountain itself has transcendent powers, she says. “No mistake,” the painter notes, “that one of the trails is called Cathedral.”

STONINGTON: BY THE NAPE OF THE NECK

In a letter written to his New York City dealer Alfred Stieglitz on September 11, 1926, the painter John Marin reported from Stonington: “This place has gotten me by the nape of the neck. Once I get here I forget other places, which is a failing I have that I am perfectly aware of.”
Marin (1870–1953), who spent the better part of 10 summers in Stonington before finding his way downeast to Cape Split, was part of an extraordinary line of artists who have fallen under the spell of this picturesque town with its steep streets and busy waterfront. The roster has included the likes of William and Marguerite Zorach, William and Emily Muir, and Stephen Pace.

Among Stonington’s greatest aficionados was Alfred “Chip” Chadbourn (1921–1998). Born in Turkey to American parents, Chadbourn came to Maine in the early 1970s at the suggestion of artist John Muench. He loved the coast; he painted views of South Bristol, Five Islands, Lubec, Yarmouth, Christmas Cove, and Portland, among other locales. In the overall inventory of his art, however, Stonington took the prize.

In his 1987 book, Painting with a Fresh Eye, Chadbourn recounts how he would drive “endlessly up and down the coast, covering every inch of each peninsula,” searching for new material. “Then I discovered Stonington,” he wrote, “a small fishing village on the tip of Deer Isle,” a “favorite spot for painters ever since John Marin immortalized it in the twenties and thirties.”

Jill Hoy has been finding similar pleasure in this place since her childhood. She grew up summering on Deer Isle. Her father, an English professor at Wesleyan College, first rented Lazygut Island, off the town of Sunshine, and then in 1965 bought a ship captain’s house on King Row. She became a painter at that point, “with an appreciation,” she has written, “of architecture and gardens, as well as light, energy, pattern, flow, and the documentation of place.”
Hoy attended the University of California, Santa Cruz and spent a dozen years in New York City before moving to Somerville, Massachusetts. When her father’s Deer Isle house was sold, she rented places in Stonington until she and her husband, painter Jon Imber, purchased a place of their own in 1994.

In Regatta on Stonington Thoroughfare (2012) Hoy juxtaposes billowing sails with piles of lobster warp and wire traps, an acknowledgment of the coexistence of seasonal and year-round cultures. She strives to capture the “hard-driving port” that is, in her words, “charged with work, light, and energy.” Hoy has learned to paint “as fast as possible in situations that require it, in order to record an essence.”
Here is the harbor that has mesmerized so many artists—and grabbed them by the napes of their necks.

NO GETTING OVER MONHEGAN

Rockwell Kent’s first appraisal of Monhegan, as recorded in a letter dated July 5, 1905, to his teacher Robert Henri in New York City, was effusive. “This place is more wonderful and beautiful than you told me it was,” he wrote. “I’ve been here almost three weeks and haven’t gotten over my amazement yet. It seems to me now that I’d like to paint here always.”

As so many artists before and after him, Kent (1882–1971) was discovering a place custom-made for the landscape painter: a handsome working harbor with its guardian Manana Island, the deep Cathedral Woods at the center of the island, and a series of bold headlands. Kent was so taken with the place he moved there, to paint and make a livelihood from carpentry and lobstering.

Kent’s Monhegan paintings stand among the most authentic such representations of island life, even as they capture the romantic nature of the place. In his view of fish houses with Manana edging into the horizon beyond, the sun casts an eerie glow over the scene, throwing shadows on the land and lighting up the tops of foreground trees.

David Vickery, from Cushing, first traveled to Monhegan as a Carina House artist in residence in 1993. A College of the Atlantic graduate, he had embraced a style that he has come to call “precise realism”: a close reading of motifs, including architectural subjects that often have a psychological edge.
Since that fateful first trip, Vickery has returned many times to Monhegan to find fresh inspiration. In the 2012 painting Descent, he chose a view of the island village from Lighthouse Hill, with Manana forming a backdrop—a classic Monhegan panorama. Like Kent, Vickery adds atmosphere to the scene by way of filtered sunlight, heightening the otherworldly quality of this picturesque outpost.

As iconic as Monhegan, Stonington, and Katahdin have become, they continue to attract artists seeking new perspectives. Every summer, and sometimes in winter, too, painters travel to these places with their easels and come away with fresh work. They renew their vows and their visions.