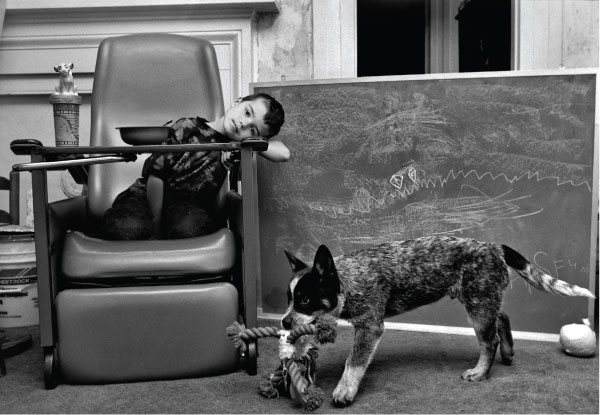 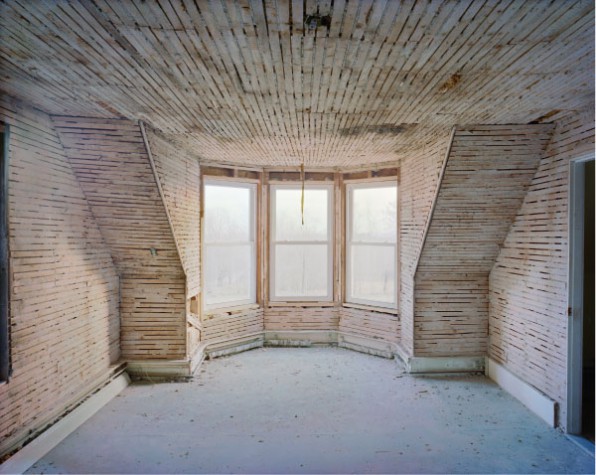 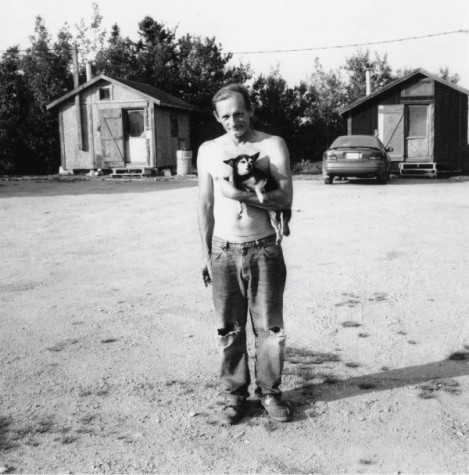 Photographers Melonie Bennett, David Brooks Stess, and Thomas Birtwistle document what many people may consider the “true Maine” that often remains hidden from view. At the same time, their documentary impulse is tempered and strengthened by their aesthetic eye and personal involvement. The work of all three photographers is characterized by a deep empathy that is augmented by a great sense of humor and appreciation for community.

Melonie Bennett found her proper subject matter through a class assignment, but she has been living with it all her life. The formally astute and emotionally riveting documents of her Gorham family grip us with a sense of wonder and empathy. While some may suspect that the scenes we have the privilege to observe are staged, they were not. Sitting on his unmade bed surrounded by torn-out images of pinup girls, Uncle Roger’s slightly zany grin (over having regained his radio) is genuine. A group of boys, young and not so young, suspend a game of cards and try on bras to experience having cleavage. A pregnant woman’s exposed belly is compared to those of her male companions. Many images focus on Bennett’s father, “a real Mainer,” who is depicted making creative use of what he has, including duct tape, to make a hernia belt. The artist’s photograph of her nephew Wyatt, who was not feeling well that morning, is full of tenderness and compositional correspondences.

The consuming needs of the family’s dairy farm required staying close to home most of the time. Consequently, Bennett’s tightly knit family developed their own role-playing games, ways of coping, and screwball sense of humor. “They don’t care about what people think,” Bennett says. “Everybody in the family is really open and at ease with themselves.”

The camera helps Bennett deal with her concern for her family’s health and well-being, and it allows her to concentrate on the unusual, quirky nature of her family’s interactions in a respectful way. A similar passion for witnessing the connection between people informs Bennett’s second ongoing series of photographs, Memory Lane Music Hall Series, in which a more ritualized behavior of entertainment and courtship is enacted. Whether she is focusing her lens on family or on friends, Bennett’s images display an incredible poignancy.

Little did Stess suspect that, on the last day of a photography trip through Maine in 1988, he would find the focus of a 20-year-long obsession: Maine’s blueberry harvest. Every year since then, he has returned to document and participate in this demanding seasonal ritual. It is Stess’s goal to immerse himself in the lives of his subjects, be they migrant harvesters or a wedding party, whom he lovingly documents rather than prettifies. For Stess, photographing people is personally enriching. “I build trust,” he says. Maybe that is why his images of children in particular are full of life. He captures them totally oblivious, doing incredible physical and imaginative feats.

When Stess rakes on the Blueberry Barrens, his camera is always nearby. “It is almost an extension of me,” he says. Over time, his images have captured a change in the demographics of harvesters, as the industry has moved away from local workers to migrants, whose lives are in perpetual limbo. Stess’s frank images convey the emotional and physical toll the work takes on his subjects, but they also evoke the strong sense of a community that tries to maintain a degree of continuity and normalcy—children doing their homework on upturned plastic bins, men carrying laundry baskets through camp, and everybody gathering around fires at night. These individuals may live at the margins of society, but they retain their pride and sense of identity and connectedness.

Lot 19 was taken in the rural, unorganized territory of Township 19 in Washington County. Stess was particularly drawn to the human–animal relationship he observed when he stopped to chat with the man. The shacks in the background are equipped with woodstoves or electricity, and they are usually occupied by up to six people. Each year, Stess gives away hundreds of photographs to his subjects. “Looking at these images is very illuminating for them because I am shooting with real respect and a sense of dignity,” he says. He believes it opens a window, allowing his subjects to see themselves in a different way.

Thomas Birtwistle conceives his photographs in distinctive groupings, some more tightly focused than others. His images are shot at Maine fairs, museums, schools, and demolition derbies, and he has loose collections of landscape and interior photographs. What ties them all together is Birtwistle’s unerring eye for the slightly absurd couched in a vernacular aesthetic that may or may not be intentional. His portfolio includes studio shots of hauntingly pale and dismembered animal forms used in taxidermy, large-scale images in saturated colors that turn jars of canned goods into abstract compositions and indices of somebody’s care, and lovingly decorated apple pies that assume monumental significance when photographed without context. “Photography allows me the opportunity to slow down and pay attention,” Birtwistle says.

Because his father taught drama, Birtwistle saw a lot of theater while growing up—which may explain why so many of his images resemble a stage set for a performance that has either just taken place or is about to happen. While the artist makes great use of his slightly offbeat sense of humor, he doesn’t distance himself from his subjects through irony. His enjoyment in what he photographs is palpable, and his subjects are often taken from his personal or professional life. He came across the scene in Bedroom while working his other job, carpentry. The quality of light and monochrome color palette extending to the barren trees outside liken this view to an abstract sculpture with volumes and lines dominating the composition. Emphasizing a symmetrical recession into space, only the bare bones of this room remain, deprived of any family’s touch (apart from the flypaper, perhaps). This space is clearly in transition and emotionally abstracted, yet it contains hope for the future. “My pictures, though very realistic, can be less concerned with the practical details than they are with the idea of something,” Birtwistle says.