A cantilevered cabin in the woods with a luxurious design 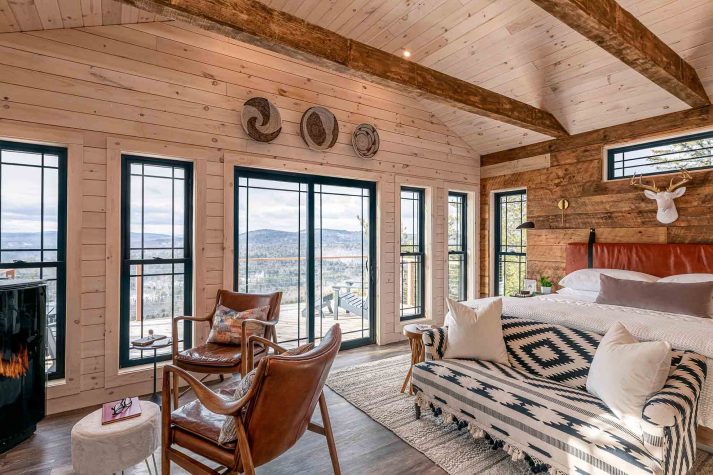 This project in Norway is part of one of the best-known New England wedding venues: Granite Ridge Estate and Barn. People travel from all over the world, including California, South Africa, Chicago, and South America, to get married here. This fall, a mountaintop cabin was built on the 200-acre property. The owners wanted to make something really special for brides and grooms. They wanted a place for couples to get away and have their own private area during weekend-long wedding festivities. The owners and I wanted the experience to be similar to that of a boutique hotel, so I spent quite a bit of time researching top hotels and special getaways in mountain locations for inspiration.

“I really liked the style of European hotels and Scandinavian design with white woods and black accents, but most importantly, I wanted to keep everything simple and bring in warmth through texture. The clients also own a 250-year-old farm, which provided some reclaimed wood to build a feature wall, and we made the bathroom and closet doors from barnwood as well. It created a nice balance between old and new in the space. Halfway through the project, the owner requested a kitchenette, so we had to do some rearranging because the interior is only 400 square feet, but it came out really cute. There’s a fridge and a microwave, an espresso machine, and a two-burner cooktop. There’s a modern European-style fireplace to help keep cozy on chilly nights, and I made sure the bed linens were crisp and sumptuous—the kind of linens that just make you want to cozy up and stay forever. A deck that has a ton of space opens it to the outdoors, and the views are really breathtaking. You’re 1,000 feet up, so it’s incredibly private.

“The contractor for this project is someone I’ve worked with for years. They’re always able to think outside of the box with me and understand my vision. I sketched up an overhang for the front entrance, because people need shelter as they’re walking in, and they built exactly what I imagined—it’s perfect. They also helped transition the cabin into something that could be used year-round. When wedding season is over, Cliff Cabin is used as an Airbnb. The owner wanted this to be the most Instagrammable cabin ever, and by the end of the project, I think we were able to deliver just that.”