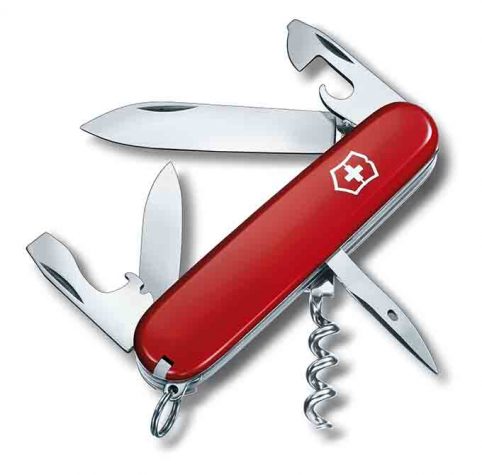 During the late-nineteenth century, the Swiss army issued its soldiers with a gun that required a special screwdriver to dismantle and clean it, while at the same time tinned food was also becoming common in army rations. In 1883 the army put out a call for a small tool that could perform these tasks while on the battlefield. Karl Elsener owned a cutler’s workshop in Switzerland that specialized in surgical and kitchen knives and received word about the army’s request. “It was a very simple thing,” explains his great-grandson, Carl Elsener Jr., head of the Swiss knife manufacturer Victorinox. The first prototype was made by Elsner in 1891; it had a black oak handle, one big blade, a tin opener, a reamer, and a screwdriver. It received the name Schweizer Offiziersmesser (officers’ knife) but that proved too difficult for American soldiers to pronounce during World War II, and thus it became known as the “Swiss Army knife.” Elsener created his own manufacturer in 1921 for the knives, Victorinox, after his mother Victoria, and inox, a shortened version of the French word for stainless steel. The knife was mass-produced with its iconic bright red handle bearing the Swiss national symbol, a white cross in the center of a red shield, outlined in white.

Elsener continued to tinker with the design and added a second blade using a revolutionary spring mechanism. He also strengthened the housing. The addition of a second blade created extra space for the spring, which also opened up more room for other tools. The multitool can now be found in the pockets of boy scouts, travelers, soldiers, building contractors, and presidents; the knives are even issued to NASA astronauts. The popular TV show “MacGyver,” from the 1980s and early 1990s, often showed its title character using the knife to help defuse a bomb or perform a tracheotomy.

Today Victorinox is still family-owned and operated by the Elseners and has five product categories: Swiss Army knives, household and professional knives, watches, travel gear, and fragrances. More than 34,000 Swiss Army knives are manufactured every day, and every recruit in the Swiss army still receives a knife upon entering the service. Victorinox supplies the army with about 50,000 knives each year. There are over one hundred models of the officers’ knife today, which can include more than 80 different features, but the core implement remains the stainless-steel knife, just as sharp and handy as it was more than a century ago.