Ogunquit, with its pristine beaches and beautiful rocky cliffs, was an in-vogue destination for up-and-coming turn-of-the-century painters, and it’s time the “women of the brush” get their due. 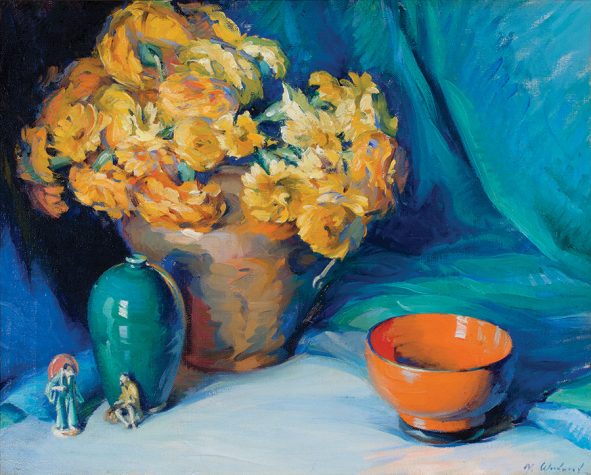 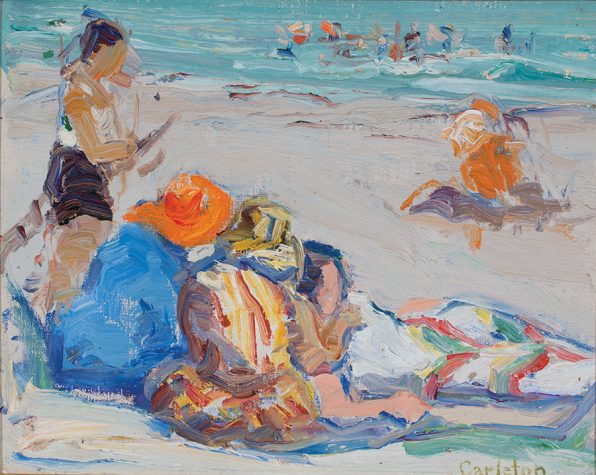 Just before the Second Continental Congress in Philadelphia, in a letter dated March 31, 1776, Abigail Adams wrote to her husband, “I desire you would remember the ladies and be more generous and favorable to them than your ancestors.” As one can deduce—since the movement toward women’s rights reform did not begin until many years later—John Adams dismissed his wife’s request. Abigail’s statement is one Ruth Greene-McNally, curator and collections manager at the Ogunquit Museum of American Art, returned to again and again when contemplating the question of why, with Ogunquit’s rich artistic heritage, the many turn-of-the-century female artists who stud-ed at Hamilton Easter Field’s “Summer School of Graphic Arts” and Charles Herbert Woodbury’s “Summer School of Drawing and Painting” had not been given a central place in the museum’s exhibitions and programs. Why, in other words, had the ladies not been remembered?

At least half of Ogunquit’s summer session students were women, many young, and many had studied art in Boston under Edmund C. Tarbell, Frank Weston Benson, and George Hallowell, among others. Many of these women, like Gertrude Fiske, Nellie Knopf, and Susan Ricker Knox, would go on to become influential painters, teachers, and civic leaders. They were suffragists, activists, and abolitionists. Greene-McNally took a deep dive to find out why this place and time produced these pioneering “ladies of the brush.”

“It was right there waiting for me when I started to do research about the succession of widespread social and political reform during the Progressive Era,” Greene-McNally explains. “In 1870, the Massachusetts Drawing Act made provisions for free drawing classes for men, women, and children through a variety of programs. And in that same year the Massachusetts legislature passed an act authorizing the teaching of drawing in all public schools. So that really was the beginning: education and legislation.”

Via Instagram, Greene-McNally then connected with Darin Leese, a Michigan collector who had a rather vast array of art, including paintings, etchings, and sculpture by Gertrude Fiske, Anne Carlton, and Mabel May Woodward. Greene-McNally invited Leese to collaborate on the exhibition, which runs in the Long Gallery through July 16. The show is not comprehensive in that it does not include every female painter in Ogunquit between 1900 and 1950; rather, it’s an exhibition that examines some of the major players’ personal and artistic histories, alongside their art.

Mabel May Woodward, for example, who studied at the Rhode Island School of Design and later at the Art Students League in New York under William Merritt Chase, had a sparkling approach to the social scene in Ogunquit, particularly during the Great Depression. She shows many beach scenes in which people are involved in conversations. “You can feel the gossip,” says Greene-McNally, “the mothers and fathers tending to their children. There’s a strong sense of what it might have been like to face uncertainty at that time, and to find in this small beach community a sense of how important art was to maintain focus on outcomes. It was a very bad time socially for everyone, including people who had lost jobs and income.” Woodward became a long-time faculty member at RISD, where she pioneered the “Action Class,” a study of the human figure as a machine rather than a stationary object.

Katharine Seymour Day, in particular, demonstrated true allegiance to her community. She was the grandniece of Harriet Beecher Stowe and the granddaughter of Isabella Beecher Hooker, who was a key figure in the American women’s suffrage movement. In addition to being a very fine painter, Day was also a prime mover in the campaign to save many of Connecticut’s—particularly Hartford’s—historic buildings, which included the Harriet Beecher Stowe House museum and the Mark Twain House and Museum. She became a member of the Connecticut Hall of Fame in 1994 for her many civic responsibilities.

Gertrude Fiske, one of Greene-McNally’s favorites, who was known as one of the “Pine Hill Girls” for the period in which she, Elizabeth Sawtelle, and Charlotte Butler roomed together in cottages on Pine Hill Road, became the first woman appointed to the Massachusetts Art Commission, which has been in effect for over a century now and is now staffed exclusively by women.

As visitors move through the gallery, they will notice that these women were paying attention to the landscape as well as to society. They were also experimenting in a variety of media and developing many kinds of techniques, responding to their legal standing, and venturing toward greater freedoms and expression in their art. “We tend to think that today women have more opportunities than ever before, and that’s true,” says Greene-McNally. “But we also have passed through eras where women have made their mark and struggled to do well. It’s just that we need to remember the ladies.”