When it came to siting a home on North Haven, Nate McBride and his clients discovered that individual parts would be greater than the whole. 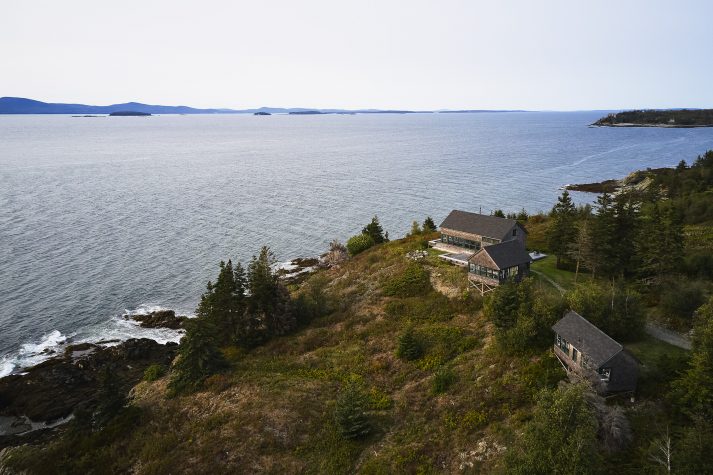 Architect Nate McBride describes breaking up the home into three distinct buildings as an episodic design that looks to have been developed over time. 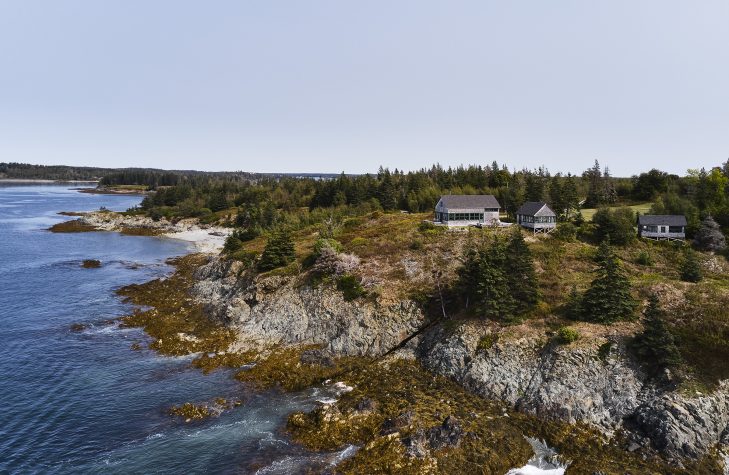 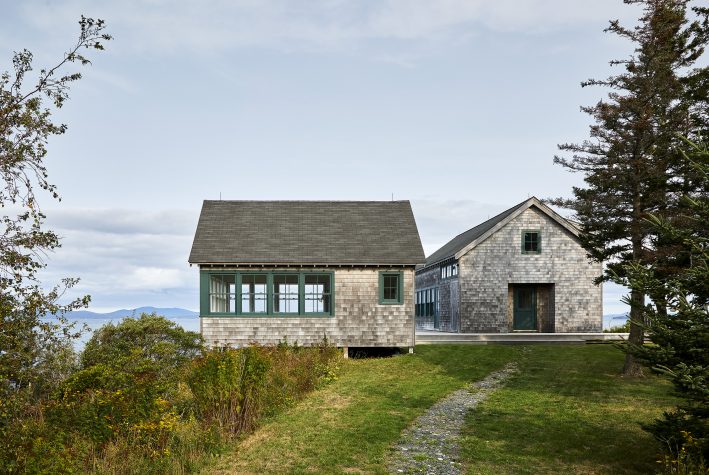 A footpath leads from the parking area, past the bunkhouse and the primary bedroom cabin, to the incised entrance of the main house. 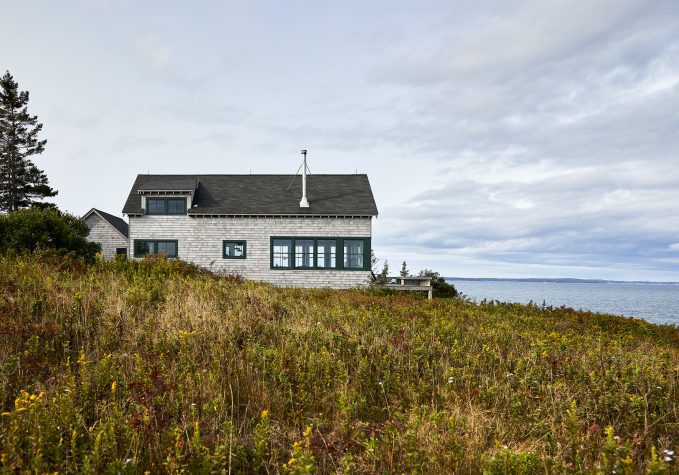 McBride added a dormer to the second floor to capture the view and to bring light into the loft even though it belies his belief that disrupting the roofline spoils the form. 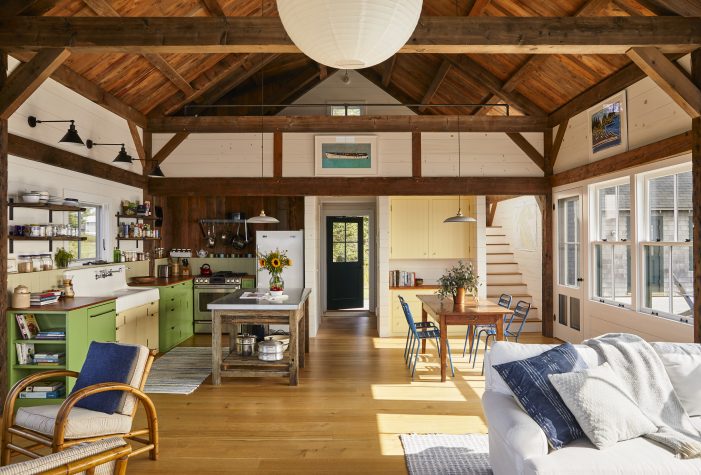 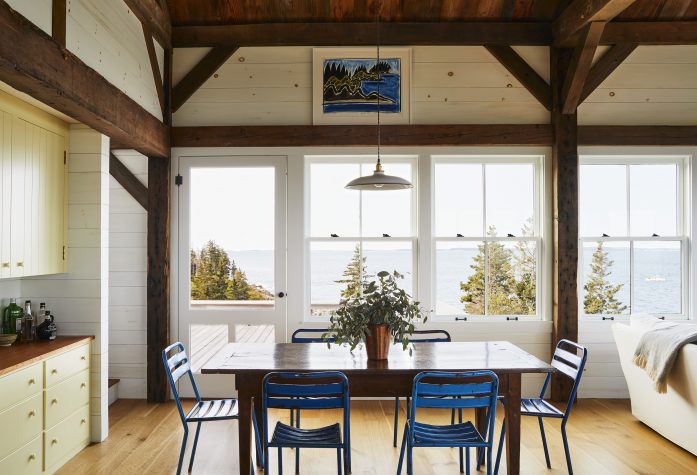 The vintage dining table and metal chairs hail from an antique mall in Stamford, Connecticut, and the pendant is from Barn Light Electric. The owners acquired Three Points by Rockland, Maine artist Eric Hopkins at Barridoff Galleries in South Portland. The door leads to the deck that both wraps around to the main-entry side of the house and connects this building to the couple’s bedroom cabin. 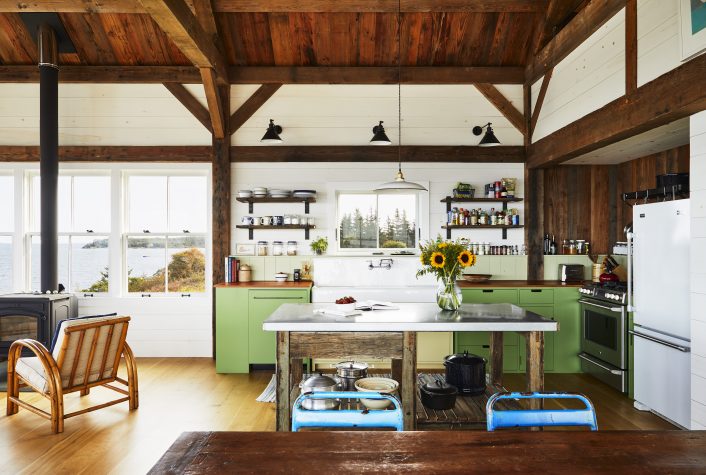 The zinc-topped kitchen island looks antiqued, the rough wood shelves with steel brackets are unfussy, and the fir countertops infuse warmth. The back ledge, which offers extra storage, is painted Farrow and Ball’s Apple Green; the cabinetry is painted Benjamin Moore’s Buckingham Gardens; and the sink base is finished in Benjamin Moore’s San Pedro Morning. The handmade rag rug is from Maine Island Rag Rugs in Rockland. 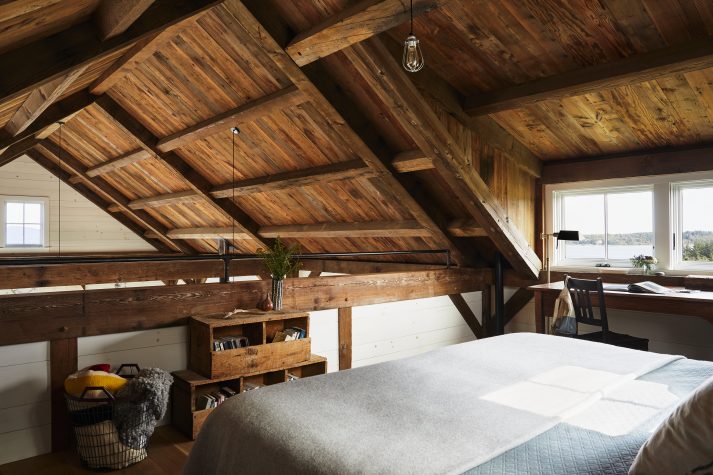 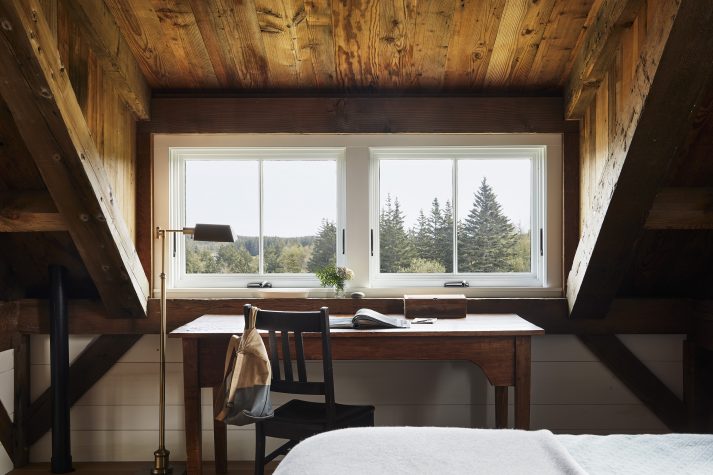 Bill’s desk, tucked into the dormer in the loft of the main house, is a favorite lookout for spotting ships and wildlife. 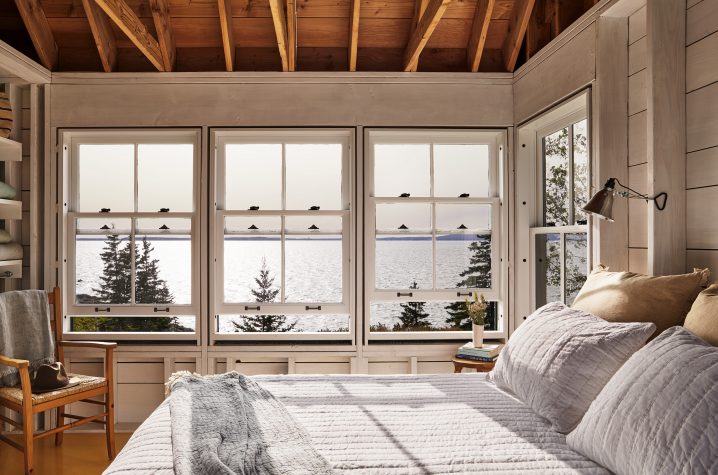 Rather than add trim around the windows in the bedroom cabins, McBride says, “In the spirit of utilitarianism, we let them be what they are.” 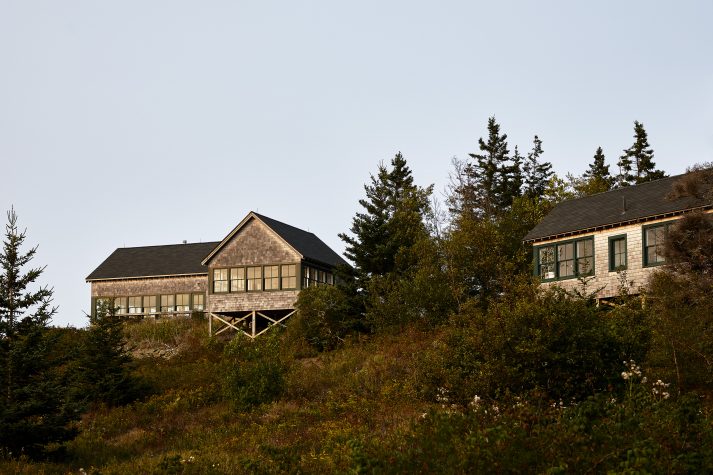 Structural cross-bracing under the cabins allow them to be cantilevered over the hill and reference docks on Maine waterfronts.

Architect Nate McBride knows when to go all-in. While homeowners Amy Davis and Bill Ambrose’s first inclination was to use restraint in every aspect of their project, including its siting, McBride challenged that perspective. Ultimately, he persuaded them that the most obvious spot to build their home was also the best one.

The couple had hired McBride to design a getaway on North Haven, a 70-minute ferry ride from Rockland through Penobscot Bay. The site? Six acres on Crabtree Point adjacent to the property where Davis and her sisters had enjoyed quintessential Maine childhood summers. In keeping with the island’s no-frills atmosphere, Davis and Ambrose didn’t want “a huge castle on the point,” but rather a rustic cabin that would blend into the landscape. McBride, who doesn’t do overwrought splendor, was an obvious partner. “Building a big house would be antithetical to the spirit of the place,” McBride says, referring to the island that Boston Brahmin “rusticators” claimed as a summer colony in the 1880s. “It would have illustrated man-over-nature instead of man living with nature.”

Nevertheless, McBride argued for siting the home on the precipice in order to capture every stunning view the land presented. The couple was skeptical that a house could be both discreet and perched, as it were, on top of the world. “Bill said, ‘Do we really need 16 lobsters?’” McBride recalls. “With a feast of outstanding views no matter where you stand, he wondered if siting it on the precipice would be too much of a good thing.” McBride didn’t think so.

Starting with the notion that their house must simultaneously revere the landscape and take advantage of its beauty, McBride delved further into the family’s needs. He learned that in summertime Davis and Ambrose’s grown children and their partners would join the couple for extended visits. Friends would make their way to the island as well. In the off-season, Davis and Ambrose would journey up from Massachusetts for long weekends à deux. Soon a concept that embraced the land and offered both privacy and flexibility took shape.

McBride proposed a series of three structures: a winterized main house as a communal gathering place for living, cooking, and eating with a sleeping loft where Davis and Ambrose would stay in the off-season; a rustic primary bedroom-suite cabin where they would sleep in the summertime; and a rustic bunkhouse with two bedrooms that share a bath, for the kids’ summertime stays. The setup affords privacy in the summer and saves on energy costs in the winter. It also provides a camplike experience, with the main house as the lodge. “There’s a good dose of connectivity to nature with everyone walking outside to and from the common space for meals,” McBride says. “Fragmenting the house into three pieces was the eureka moment.”

The structures nestle into the landscape, with the main house sitting on the summit and the cabins tumbling along the ridge. “The landscape informs where each is located, rather than the hand of the designer,” McBride says. The arrangement also reflects the manner in which old-timey homesteads evolve. When a family needed a new barn, they built one; another year a chicken coop might have gone up. McBride points out that the way the compound is organized mirrors that, at least in looks. “Elements intentionally appear as if built, repaired, and added to over time,” says the architect, who applied the approach through the interiors too, particularly in the kitchen.

As for materials and form, the structures are amalgamations of the island’s vernacular architecture. The late-nineteenth-century shingle-style “cottages” built by the rusticators, now often owned by their descendants, inform the buildings’ green window frames and Alaskan yellow cedar shingle siding, while the utilitarian barns that dot the rural landscape inform the buildings’ uncomplicated, shedlike shape and inexpensive flat-tab asphalt shingle roofs.

The reclaimed Douglas fir post-and-beam structure of the main house, which McBride jokes was erected like Tinker Toys, also invokes the feel of an old barn. The white-washed tongue-and-groove boards that line the walls bring to mind a classic farmhouse. “The reclaimed beams and ceiling planks cost more but really add to the character,” Ambrose says.

That character reveals itself just a few feet beyond the front door. McBride explains, “You progress from the vast infinity of the outdoors to a compressed, cozy space where you do intimate things like take off your boots. Once you move through the rabbit hole, the ceiling explodes in height and the view explodes in width. It’s the wow moment.”

Indeed. A band of windows wraps the house on three sides, presenting a 180-degree view of the bay. It’s akin to being on the prow of a ship, a sensation Ambrose, an avid sailor who grew up on the water, very much appreciates. Davis, who likes to experiment with the bounty of gorgeous produce from the island’s local farms in the zippy green kitchen, welcomes the room’s open layout. “I can cook and be part of the conversation,” she says. “We live in an old farmhouse with a separate kitchen, so I’ve never had that.”

Behind the dining table, a staircase with an iron plumber’s-pipe handrail leads to the sleeping loft in the eaves where, in a move that prompted interoffice debate, McBride added a dormer window looking north. “The purist architects thought it would ruin the line of the roof,” Ambrose says. “It has the best view in the house.” His wife concurs. “Bill spends a lot of time staring out the window when he’s trying to work at the desk up there,” she says. “The birds, seals, porpoises, and boats are very distracting!”

When it comes time to venture to their bedroom via the deck that links it to the main house, the couple sometimes must brave the elements, which can be harsh up on that cliff. “If it’s raining, I’m thinking, ‘Why isn’t our bedroom connected?’” Davis says. Ambrose tells a different tale, admitting, “I love the gale winds and rain that makes going between the two cabins like being on a ship’s deck during a storm.” His wife says with a laugh, “It’s his ‘Bill on the High Seas’ fantasy.”

Unlike the main house, which looks like a barn but is actually quite comfy with its radiant floors, Norwegian woodstove, and overstuffed sofas, the sleeping pods are pretty bare-bones, just as the couple requested. “The property has a very rustic two-room cabin with open framed walls that we call the fish house. We’ve developed an affection for it and hoped Nate would draw inspiration from it,” Davis says. He did.

McBride describes the cabins’ aesthetic—their conventional stud framing, whitewashed walls, unfinished wood ceilings, and painted plywood floors—as utilitarianism meets modernism. “Letting the structure and mechanical systems express themselves is a maxim of modernism,” the architect asserts. “It’s about letting them be what they are.”

At the end of the day, it’s the island’s natural beauty that shines brightest. The trails that weave through woods and pastures around the rocky point; the bald eagles that alight in the trees; the piles of wild raspberries, blackberries, and gooseberries that the land yields; the drama of the ocean; and yes, the lobsters. “I’m very happy Nate convinced us to do it this way,” Ambrose says about the compound that they’ve named the Three Cabins. “Sitting at the top is amazing.” 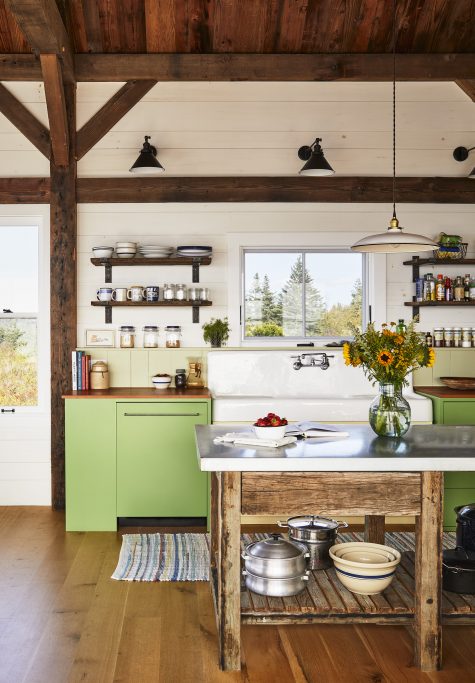 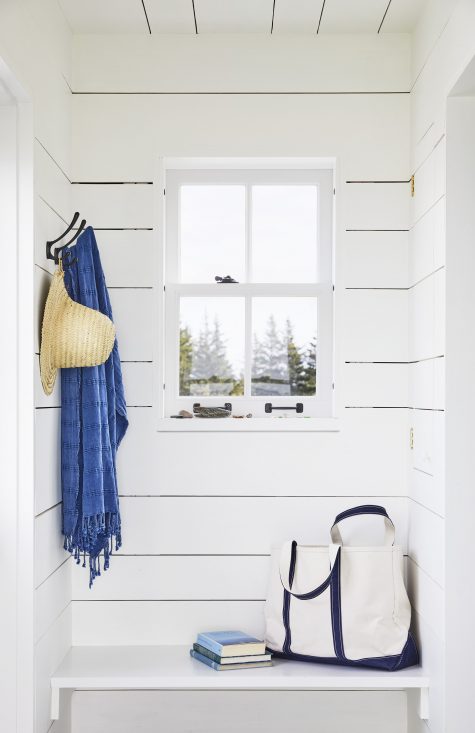 The windowsill in the entrance vestibule of the primary bedroom cabin holds treasures collected during walks around the island. 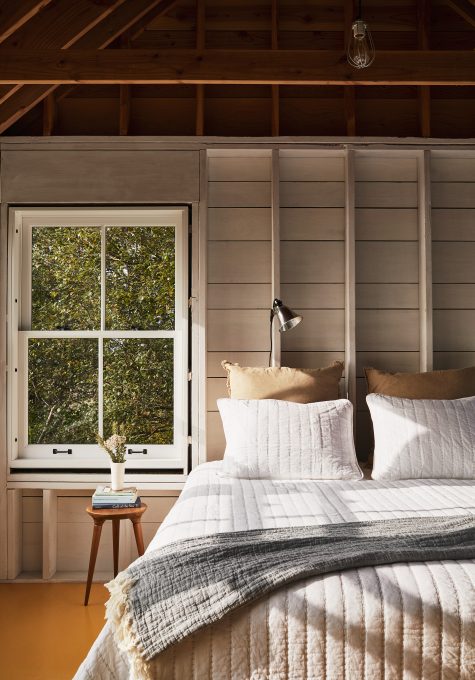 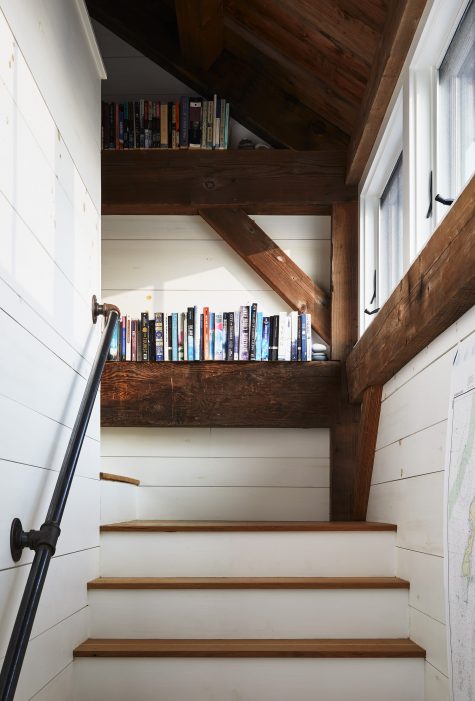 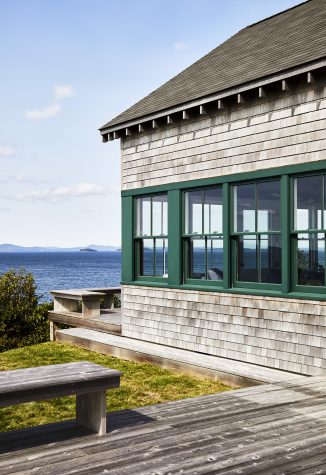 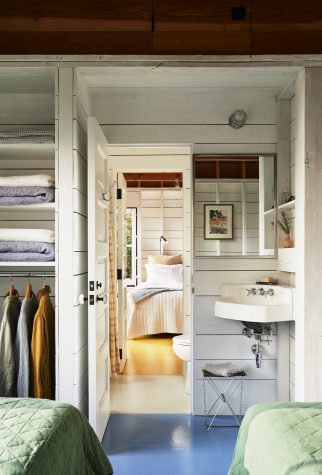 The bunk cabin rooms have corner sinks reminiscent of servants’ quarters; the plywood floors are painted Benjamin Moore Lazy Sunday and Happily Ever After. 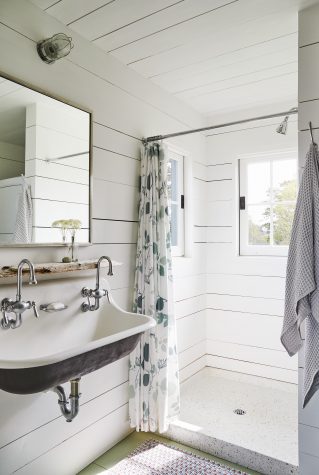 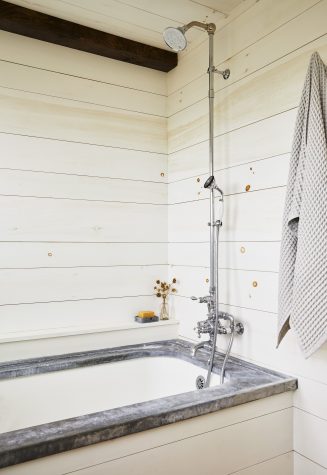 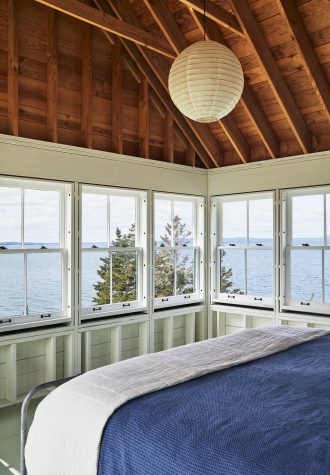 Painting just the lower portion of the walls in the primary bedroom establishes a human scale in the soaring space. 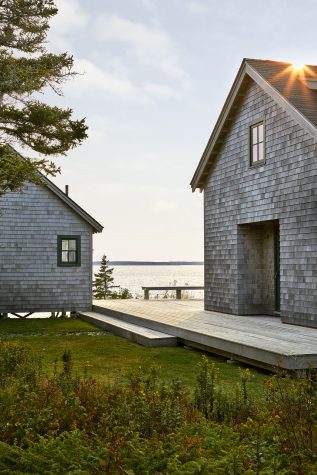