“Flying Woman: The Paintings of Katherine Bradford” opens at the Portland Museum of Art on June 25. 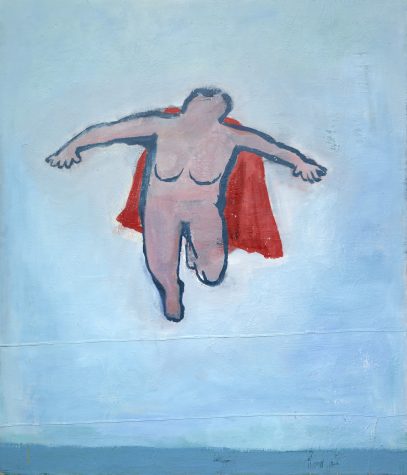 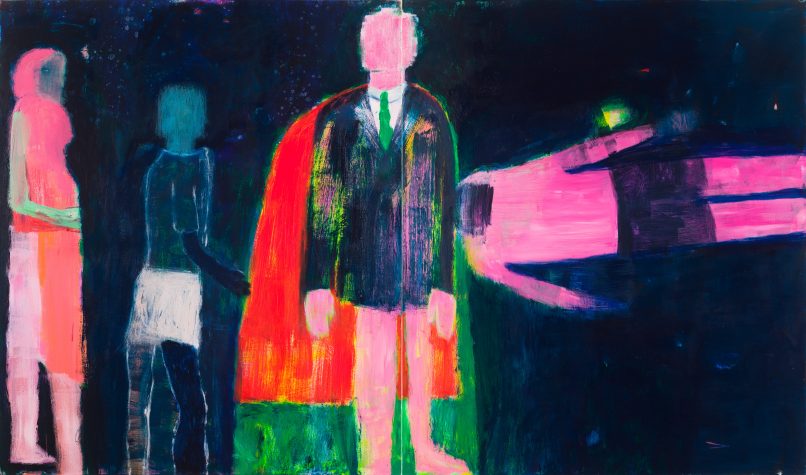 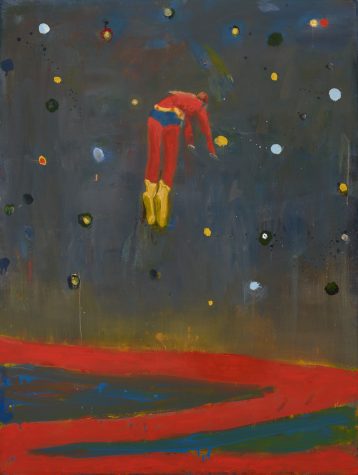 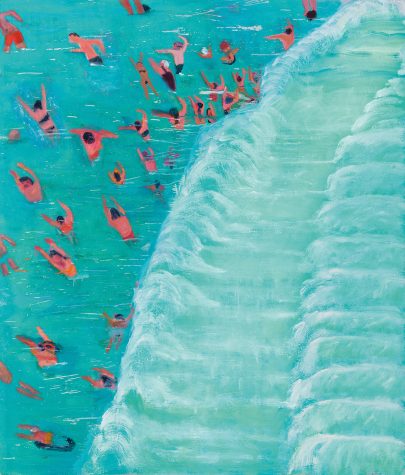 How does a superhero become superhuman? Friedrich Nietzsche can offer some guidance: “He who would learn to fly one day must first learn to stand and walk and run and climb and dance; one cannot fly into flying.”

Portland Museum of Art (PMA) curator Jaime DeSimone quotes the German philosopher in her essay printed in the catalog of Katherine Bradford’s new exhibition Flying Woman: The Paintings of Katherine Bradford, opening at the PMA on June 25. The title of the show is a play on the title of one of the Maine- and New York City–based painter’s most recognizable works, Woman Flying, which was a breakthrough piece for the artist when she completed it in 1999. It was the largest painting Bradford had ever done and depicts a woman with a red cape hanging, somewhat uneasily, in midair. Not only did the PMA accept the painting to be featured in its 2001 biennial, but in 2012 they acquired the piece. Bradford recognizes the PMA’s encouragement as a significant milestone in her career. In her essay, DeSimone quotes Bradford as saying, “It was the first time my kind of awkward painting was given the ‘okay.’”

Today, it’s hard to imagine Bradford ever thinking of her work as awkward. Demand for the 80-year-old artist’s color-saturated canvases—thought-provoking paintings that explore her biography as an artist, woman, mother, and lesbian—has continued to grow over the past 20 years, as has her list of accomplishments. Last August Bradford received the 2021 Rappaport Prize from deCordova Sculpture Park and Museum in Massachusetts; she also has been awarded a Guggenheim fellowship as well as awards from the Joan Mitchell Foundation, the American Academy of Arts and Letters, and the Pollock-Krasner Foundation. Last year New York City’s MTA Arts and Design commissioned Bradford to create glass mosaic murals for the L train’s First Avenue station in Williamsburg (arguably one of the hippest subway stops in the city). And in March of this year, Bradford’s top auction record was set when her acrylic-on-canvas work Couples Swimming (2015) sold for $50,400.

But it took years for the artist to begin receiving her due recognition. Bradford, who grew up in Connecticut, moved to Maine with her husband Peter Bradford in 1968, and a year later she gave birth to twins Arthur and Laura. While Peter worked as an assistant to the Democratic governor Kenneth Curtis, Bradford raised their children and began pursuing painting, an art form she had become passionate about in her youth but one her mother had disapproved of. “Her mother was like, ‘Oh, I have friends. Why don’t you paint their portraits or their pets?’” says DeSimone.

Bradford became involved with a group of artists and poets centered around the painter Carlo Pittore and began using her barn as a makeshift studio. When her children were toddlers, she registered to attend Portland’s Concept School of Visual Studies, where she painted one day a week. She also helped to found the Union of Maine Visual Artists and began regularly attending lectures at the Skowhegan School of Painting and Sculpture, which was about an hour’s drive from her rural home.

In a 2017 interview with Allie Biswas in Glass magazine, Bradford reflects on those early years: “When I started painting, I was living in Maine, which is such a rich place for the history of modern American art. I’m thinking of artists such as Marsden Hartley and John Marin. I think that I was influenced, not so much by looking out to sea, but by the great paintings that came out of that area; by the many painted representations of sea and sky.”

But her husband’s political pursuits and their domestic life together did not align with Bradford’s desire to become an artist, and in 1979 the two divorced. Bradford packed up her ten-year-old children and moved to New York City, with the plan of returning each summer to her Maine studio to paint and to reconnect with the artistic community that had become a vital form of support.

Her New York City years were equally difficult. Bradford felt like a newcomer dismissed by the older, more established art crowd. “When I started out, I had to think about my dream of living as an artist, but I was also raising two children,” she says. “I didn’t find a lot of time to paint. I just took one step at a time.” Bradford’s first show was not at a prestigious gallery but at Corsican Pizza in Brunswick. “I loved having that show,” she says. “I started out very small as an artist, but one thing led to another.”

When Bradford’s children were young adults, she began teaching to support herself. It wasn’t until she got to be in her 60s and 70s, teaching less and with her children launched, that she was finally able to throw herself into her work. It was 2015 when she started showing at Canada, a sophisticated Lower East Side gallery known for its original, contemporary art exhibitions. “That’s when her visibility took off,” says DeSimone. “Not that her painting practice wasn’t prolific before that, but a gallery can help an artist gain recognition, visibility, accolades, and sales, that’s kind of the tipping point. That’s where we see her more active in New York, getting solo shows.”

When the chief curator of the PMA at the time, Jessica May, and DeSimone first sat down with Bradford a few years ago to discuss the possibility of this show, they were using the word “retrospective.” “What does that mean, thinking about an artist who’s going to turn 80, who got into painting later in life?” says DeSimone. Bradford was clear that she wanted the show to start in 1999, that her work from the ’80s and ’90s barely existed anymore and was not indicative of what she thinks of as her signature style. “The paintings that showed at the PMA in 2001, including Woman Flying, are the body of work that cemented her style and gave her the confidence to keep painting,” says DeSimone. Bradford calls Woman Flying her “superhero painting.” In the exhibition catalog that accompanied the 2001 biennial, she wrote, “I have presented her as barely able to fly, more in a state of longing than of accomplishment. Because she is seen as trying to do something for which she is unequipped, we catch her in a state of vulnerability and exposure.”

Today, the title flip suggests the woman no longer awkwardly hangs, but soars. She has broken free from old-fashioned ideas of what it means to be a woman, of what a woman is allowed to do or to accomplish. “More and more, as we get to know artists who have been marginalized over the years, particularly women artists who have come into an art world later in life because of social demands like being a mother and having a career, Kathy’s story is a part of that,” says DeSimone. “She’s this very brave woman who through this community of artists builds confidence to become what one might say is both an abstract and figurative painter, but really pushing what each of those definitions means.” Flying Woman: The Paintings of Katherine Bradford is on view at the PMA from June 25 through September 11, and will then travel to the Frye Art Museum in Seattle in winter 2023.