Drawing from the “forest primeval,” Evangeline offers blankets and throws made from pure plant and animal fibers 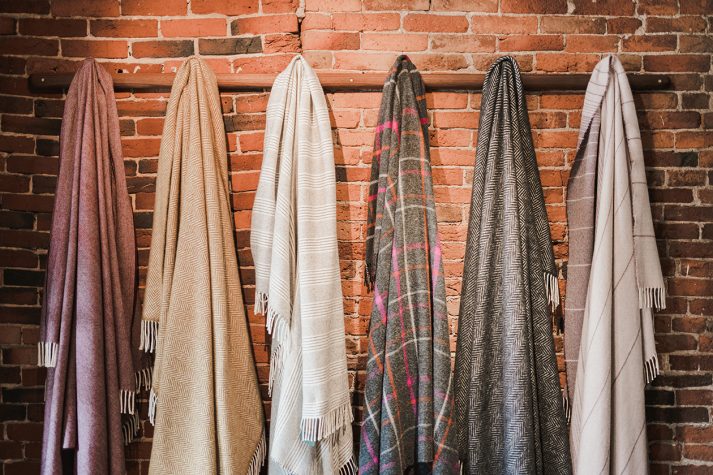 Some of Evangeline’s luxurious throw blankets, in herringbone weaves, stripes, and plaids. 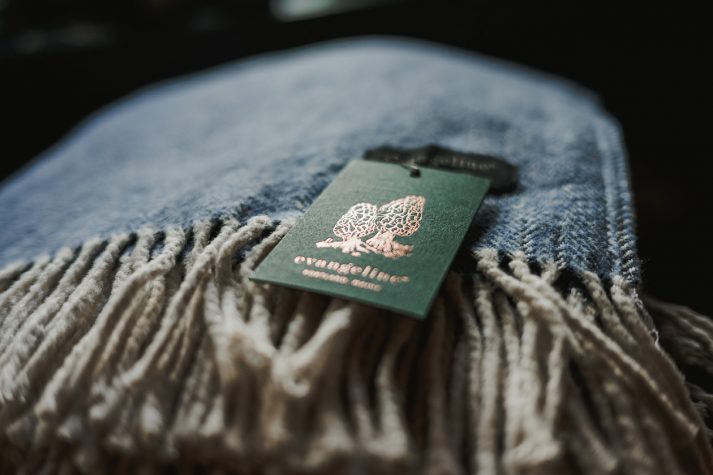 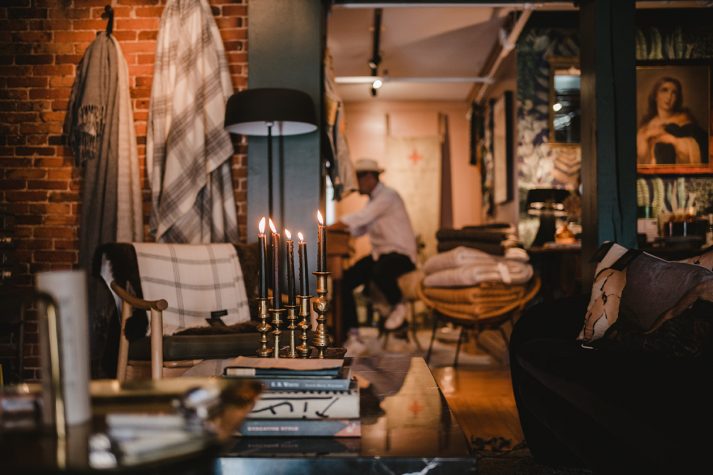 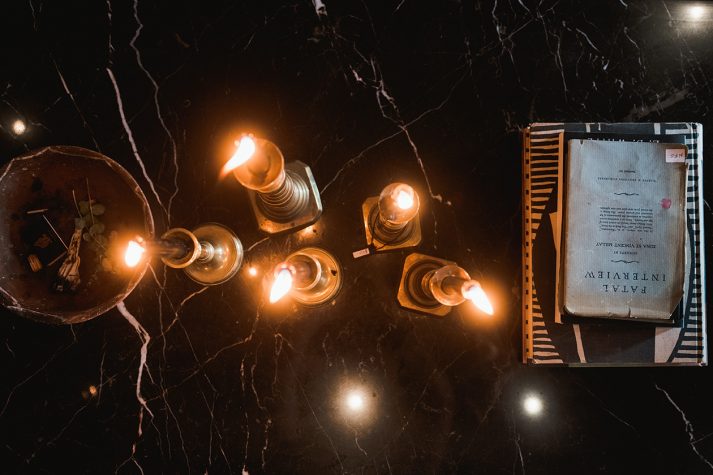 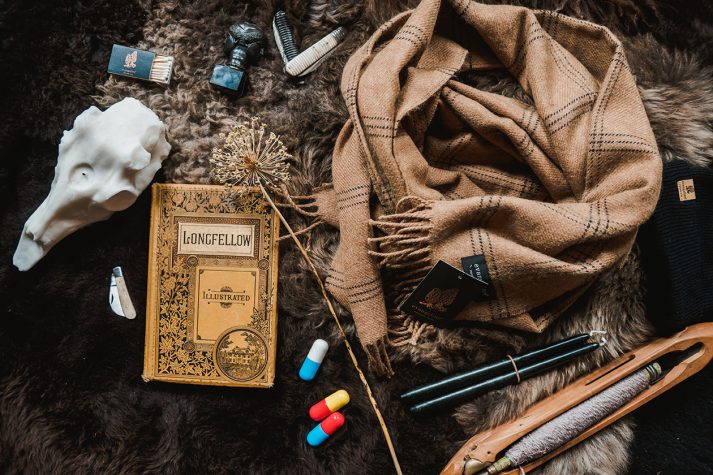 Against a background of sheepskins, some of the treasures to be found at Evangeline: the soy skull candle Ray makes himself, a wearable wrap made of merino lambswool, and, of course, a volume of Longfellow’s poetry. 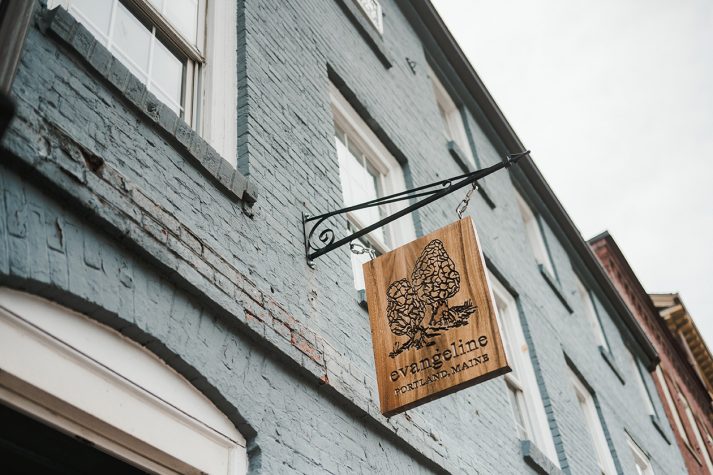 Stepping into Evangeline out of the sunshine of a bright fall day is like walking into a cool, shady grove during a summer hike. As the visitor’s eyes adjust to the darker environment, contrasting textures swim into view: exposed brick walls and dark wood ceiling beams juxtapose antique Persian rugs and velvet seating. An aging Vespa scooter perches on an old brick hearth. And everywhere, draped on every surface, are textiles: throws and scarves, pillows and blankets, all beckoning to be touched and felt. This is a deliberate choice on the part of Evangeline’s founder and head designer, Ben Ray: “I like feeling things. I’m a texture person,” he explains. “Textiles are something that I’m passionate about.”

A native son of Lewiston, Ray began his retail career soon after graduating from college, when he opened outdoor apparel stores in Bar Harbor and Portland with a friend. He then joined the team at Angela Adams, the famed Portland rug designer, and later spent a few years working for French lighting manufacturer Objet Insolite, followed by time at legendary Maine blanket maker Brahms Mount. “Brahms was terrific,” Ray recalls. “When I was working there, it was a family-owned business; it was great.” But in the back of his mind was always the thought of his own venture, and when Brahms Mount sold to a big conglomerate, he knew it was time.

“Evangeline is only five years old,” says Ray. “We started in 2018, and this is just our second year in this space. Before that, everything was at our house. I was working in my living room, shipping from the dining room table. But we work with some really large companies, and they would say, ‘We’re going to come to Maine and see your setup!’ And I was thinking to myself, ‘Yikes, don’t peek behind the curtain!’” When he got the chance to move into a storefront on Fore Street in Portland’s Old Port, he seized it. “The history of the building and the vibe very much fit us,” he says.

Housed in one of the Old Port’s oldest buildings (built in 1792, it survived the Great Fire of 1866), Ray’s shop reflects his vision in every detail. “Evangeline is named after the Henry Wadsworth Longfellow poem, ‘Evangeline: A Tale of Acadie,’ which represents everything that Maine is to me: the moss and the woods and the cliffs and the ledge and the sea. We want everything to sort of flow from that,” he says. The deep, rich green paint on the columns and shelves (Benjamin Moore’s Hidden Falls), for example, is also the color of Evangeline’s hang tags. “This color always reminds me of the forest. It’s a happy green,” says Ray. It’s complemented by his choice of wallpaper, Burke Decor’s Green Sanctuary, whose pattern of delicate ferns and flowers creeps up a back wall.

“When we first took over the space, it was right when everything was locking down for COVID. The first thing we put in was this bar, and my wife and I came down here to start working on the interiors. That was our big night out!” Ray recalls with a laugh. “But you know, this is a just nice place to hang out.”

An antique table laden with bottles and glassware stands in front of the back wall. Ray found the table on Craigslist, as he did many of his furniture selections for the store, and they’re all available for purchase. “Everything is for sale,” he says. “It gives me an excuse to change things up. So if you wanted this couch, you could take this couch home.” There are also books, many with a Maine focus, scattered around the shop, and Ray’s signature deer skull soy candles peer out from shelves. (He used to make them in his kitchen; now he has a devoted candle-making area downstairs from the retail space.)

But the real stars of the space, of course, are the textiles. Generous-sized throws are available in wool, alpaca, cashmere, and cotton, while blankets of cotton and wool range from baby to king size. Ray feels strongly about using only the finest natural fibers (see the opposite page for details), and he values working with people who understand them. “We have some terrific folks that we work with who are always able to create what I’m thinking,” says Ray. “We have a list of folks that we work with whose families have been running mills since the early 1800s. They’ve inherited the mill from their parents and still keep up that tradition.” The locations of these mills span from Italy to the United Kingdom and from Ireland to Portugal (where Ray’s latest creation, a linen blanket, will be made). Many of Evangeline’s cotton throws and blankets, however, are woven much closer to home, here in a state that has its own storied textile production history. With his company taking its inspiration from Longfellow’s melodious phrases about the “forest primeval” and the “murmuring pines,” Ray likes having some of his goods produced in Maine. After all, as he points out, “Our whole thing is a Maine story.”

As chief designer, Ben Ray loves choosing all sorts of natural materials for Evangeline’s blankets and throws. “We run the gamut. We do cottons, we do merino wools, we do alpaca. Obviously, we do cashmere! And we’re introducing a new linen blanket,” he explains. For fellow fans of pure plant and animal fibers, here’s a selection of what awaits at Evangeline.

• One of Evangeline’s best sellers is an ample throw blanket woven for them at a family mill in Ireland. “This is 50 percent alpaca, 50 percent merino wool. So nice and light. This is what’s on my couch at home,” says Ray.

• Stacks of fuzzy mohair throws in muted colors fill several shelves. Ray notes, “Mohair is still having a moment. It sheds, you know, but it stops shedding after a little bit. We also brought in bouclé mohair, and its loop pile keeps the shedding down.”

• Of course, for the ultimate in throw blanket luxury, there are 100 percent cashmere throws in Ray’s favorite neutral shades of beige and gray. (“I always say I’m allergic to color,” he laughs.) Woven in Italy, these cashmere throws are almost ridiculously soft. “When I brought in the cashmere, I thought, wow, these feel almost fake. But that’s because they’re so thick; it’s four-ply cashmere,” explains Ray.

• For lovers of local goods, there are the cotton blankets woven right here in Maine. “We did a throw blanket for the Canopy Hotel. It’s a 100 percent cotton, something very New England,” says Ray. “Every week, we must have two or three visitors from the Canopy Hotel that have slept under them, and they come in and ask, ‘Do you have these? Can we get them to take home?’ It’s a great partnership.”

• “We’re a blanket and throw company, but you know, we’ve dabbled in other things,” says Ray, “and our beanies have done terrifically. I was thinking to myself, you know, did I really want to get into apparel? But beanies made sense.” Made of soft merino wool and available in several colors, thanks to wool’s insulating qualities, they will keep their wearer’s head cozy and warm in all weather. 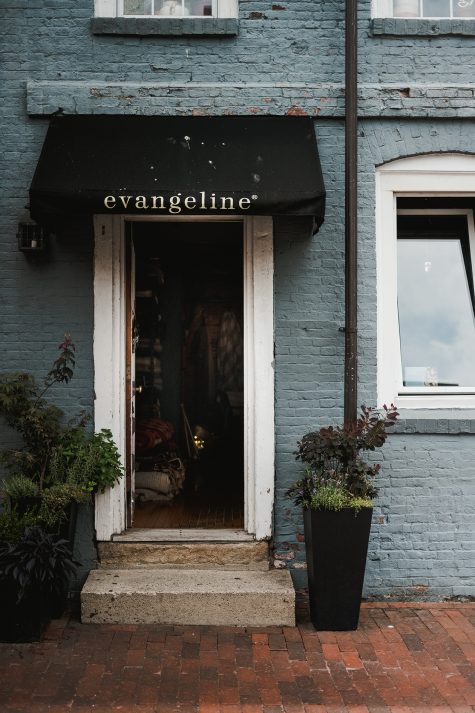 The entrance to Evangeline, in an Old Port building that survived Portland’s Great Fire. 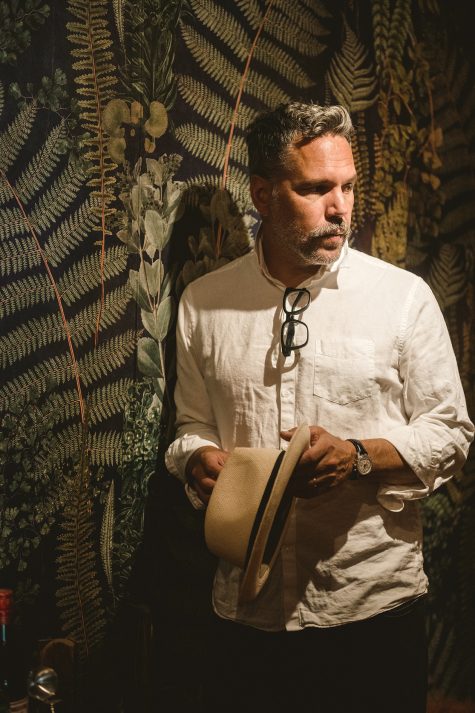 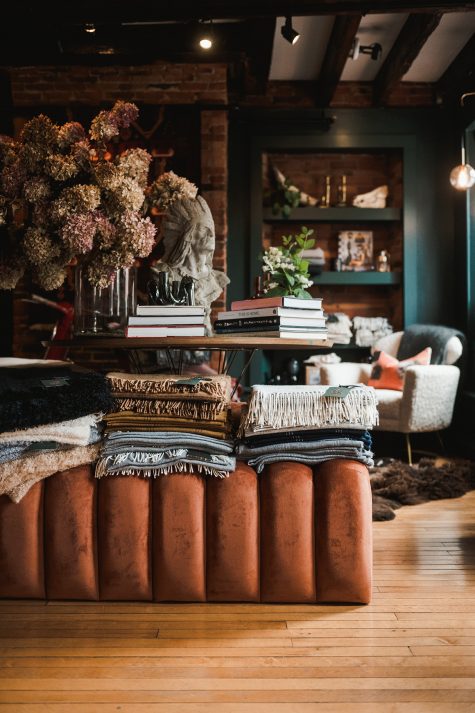 Textiles cover almost every surface inside the shop. 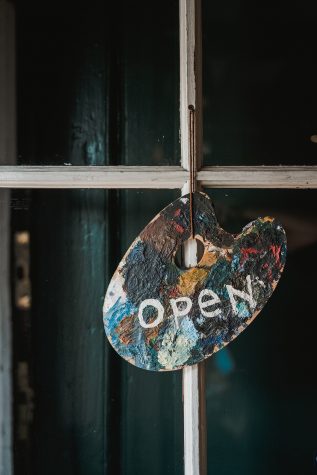 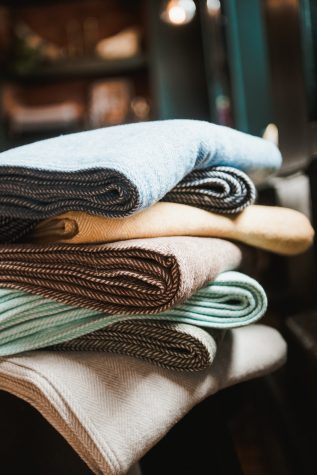 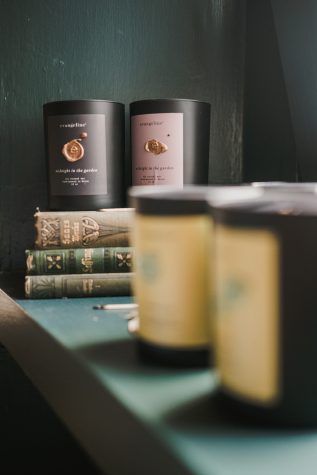 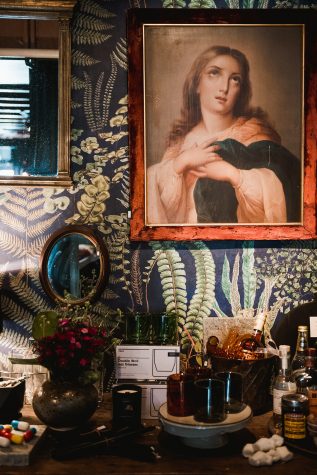 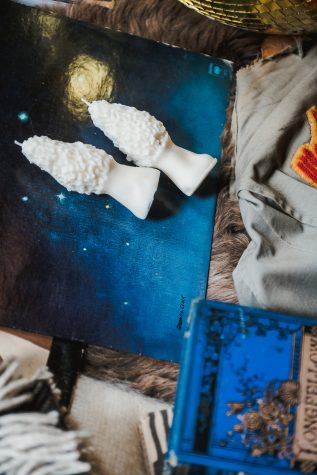 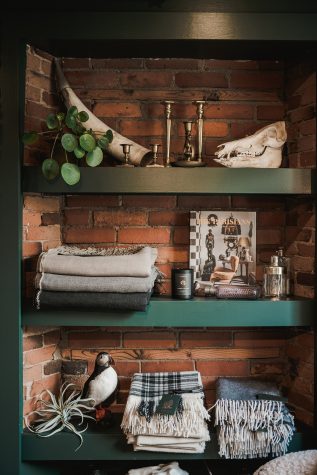 Ray collects all sorts of beautiful objects to adorn the built-in shelves, including a deer skull, the inspiration for his handmade candles. 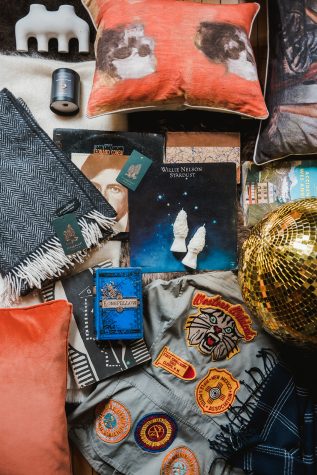 Screenprinted pillows and velvet pillows mingle with vintage finds and a disco ball. 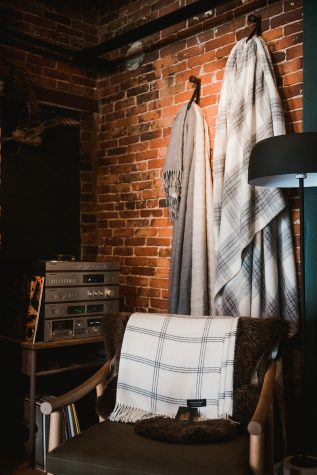 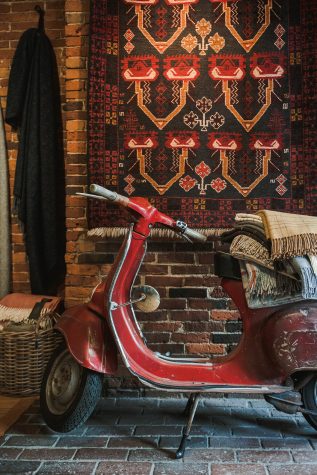 Ray has a record player tucked in a corner and a nice collection of vinyl to spin. A vintage Vespa scooter holds more blankets. 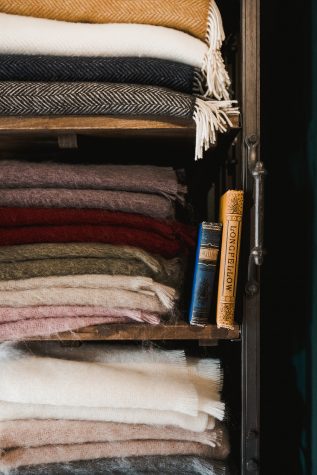 The mohair blankets are as light as air.