Visiting a stone artist in his natural, fantastical habitat 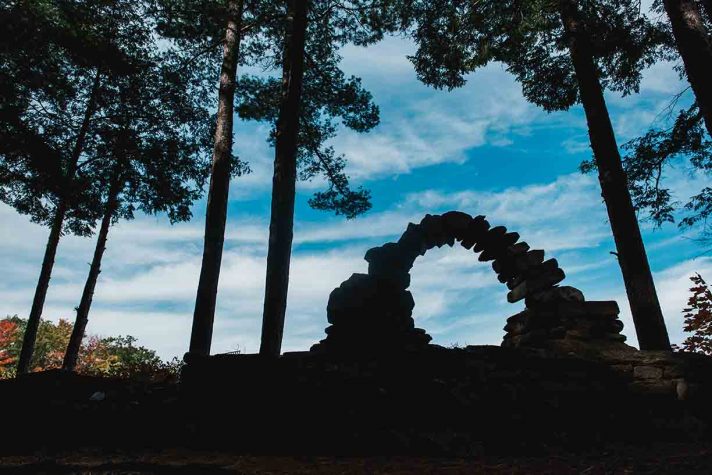 “The thing about this place is that, one of the driving forces for both my wife and I, nothing is more important than our kids,” he says of his home. “We always wanted our kids to know where they came from.” 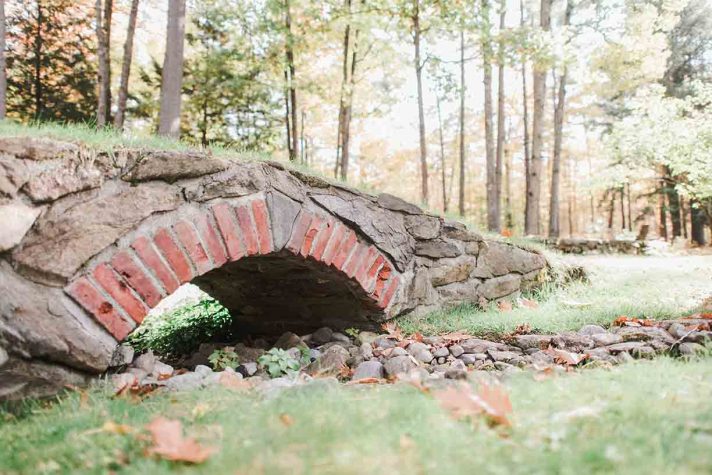 Watson doesn’t accept payment for his art. “Stonework is about the joy of doing it,” he says. “I do social work for money.” 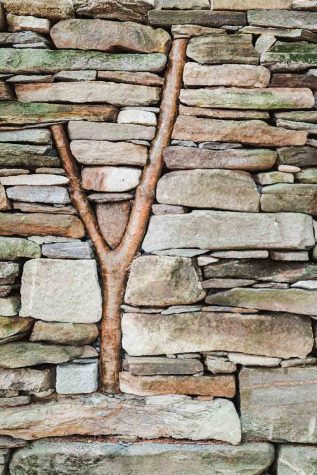 Sometimes, Watson incorporates pieces of wood into his large-scale stacked-stone pieces. He covers the branches with marine-grade varnish for longevity. 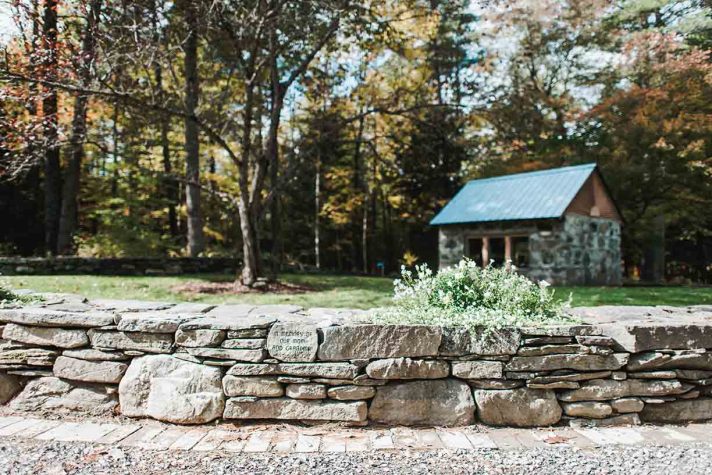 Watson’s work is heavily influenced by his family, including his two kids Hannah and Taylor, and his wife, Kathy.

In Mount Vernon, down a gravel road on the edge of a kettle pond, there sits a large stone arch covered with lichen and dusted with fallen pine needles. On the longest day of the year, as the sun sets over the water it sends a few of its last rays through the circular sculpture. The light falls through the trees, through the woods, over the moss, and onto a circle of stone plinths. It’s not magic, how this happens, but it’s close. It’s art.

You won’t find Richard Watson’s art for sale in any gallery, not in Maine nor in New York nor anywhere else. His sculptures aren’t for sale, nor does he sell his labor as an artist or his know-how as a builder of chimneys, breaker of rocks, and stacker of walls. “I only charged for stonework once,” he says. “I got a call from someone who wanted me to build a stone wall on their property. I decided I would never do it again.” It felt too transactional. The entire time he was working, he was thinking about hourly rates and watching the clock. It felt wrong. “The beauty of stonework is that, when you’re doing it, you have no awareness of time,” Watson says. “You just pay attention to the stones.”

Watson is an unconventional artist in many ways. He has never had any sort of formal training. In fact, Watson doesn’t create art for money because he “does social work for that.” His art-making history started in the late 1980s. He had just moved to Mount Vernon with his wife, Kathy, and their growing family. They had 15 acres of land. Like many parts of Maine, the Watsons’ woods had “a lot of flat stones.” Watson says, “I would walk around and think, there’s a stone. What could I build? I could build a stone wall. That’s how I started lifting up rocks.”

Watson also describes his work in unexpected terms. He doesn’t talk about great artists who influenced him, and he doesn’t reference important movements or drop names. Watson is straightforward. He lifts stones, he puts them down. At the start of each piece, he gathers up all his materials, then he builds the structure, then he carts the extra rocks away. It’s simple, the way he works. But it involves a lot of effort and a lot of preplanning. He’s harvested rocks from all over his land and the surrounding woods. When the drought hit a few years back and the water level sunk down and down, Watson took advantage of the opportunity. He dragged rocks up from the bottom of the kettle pond and placed them on the far shore. Patiently, he waited until winter weather froze the surface, then he dragged them over to his yard in a toboggan. When he’s working, he explains, he doesn’t really think about it. He just does it. What kind of stones does he prefer? “Nice big flat ones,” he says. What kind of color does he look for? “The color takes care of itself. It’s mostly gray up here.” What kinds of sculptures inspire him? “Old stone walls are always intriguing.

That’s not to say his pieces are unsophisticated. They are balanced and thoughtful. They’re also quite whimsical. Personally, when I viewed it as a whole, Watson’s body of work left me feeling a sense of childlike amazement, like I’d stepped out of my Subaru and into a fairy tale, complete with little stone mushrooms and a Tolkein-inspired potting shed. (A gift for his wife, he explains, who is a huge fan of the trilogy. “Our license plates are BAG END and SHIRE,” he adds.) As we walk around the trails of his property, he reveals that his pieces are often about big ideas, big themes, and big moments. The miniature Stonehenge is about “mystery, curiosity, and wonder.” (“Stonehenge itself is a mystery,” he adds. “We don’t know why it’s there, what it does.”) A pair of stone circles is about motherhood, he says, because it “always reminded me of a mother and a child.” The stones that mark the path to the water are “about security, because they let me know where I am going.” Some pieces he built for his wife, others he built for his kids. Sometimes, he builds art for his friends. He’s also auctioned off a few pieces for charity. Once, he donated a piece to the Augusta Arboretum. It stands amid the trees, a pyramid made of local sedimentary rock, gray and flat.

But that’s the only public place you can see Watson’s art. Other than the one at the Arboretum, all his pieces are located on private property. “I guess you could call me up for a tour,” he says, but that’s not something he’s ever done before. He creates these pieces because he likes how it makes him feel, and he likes wandering the woods, building cairns, taking the lower limbs off trees, clearing the area for a new sculpture. He’s composed his surroundings to create an outdoor museum where nothing is for sale and everything is constantly moving. It’s meditative work, he explains.

“There’s another factor,” he says after we’ve been talking for some time and circling around the idea. “People often ask the question, ‘Why do you do stonework?’” Once, he tells me, he was at a cookout with a friend, and instead of waiting for Watson to answer, his friend jumped in: “He does it to deal with his own mortality,” the friend said.

“He was right,” Watson tells me. “Stones have been here forever, but they are always moving. The earth is always swallowing them up and spitting them back out. Every stone wall that has ever been built, including the pyramids, will go away some day.” But still, he finds the idea that his rocks will outlast him rather comforting: “It’s making a literal mark on the landscape. It’s a nice illusion of permanency.” 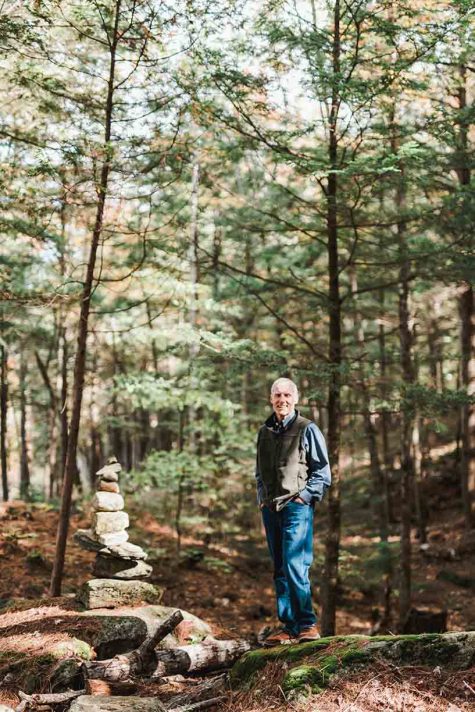 Over the past 33 years, artist and social worker Richard Watson has created a forest playground packed with sculptures on his land in Mount Vernon. 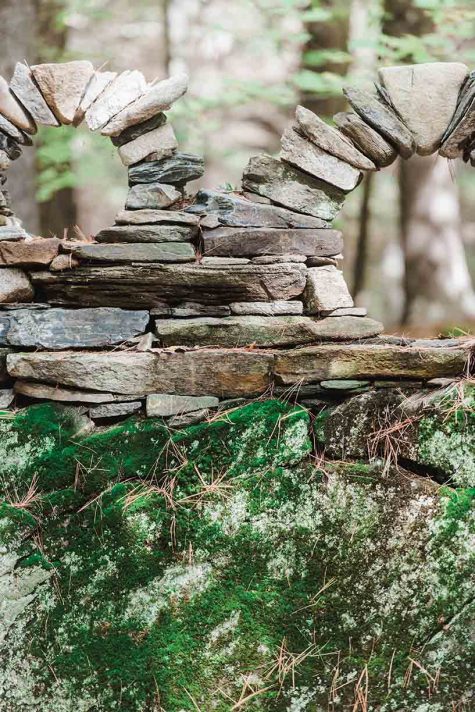 To create an arch Watson uses a wooden mold that is removed at the end of the process. He refers to this piece as the “mother and child.”