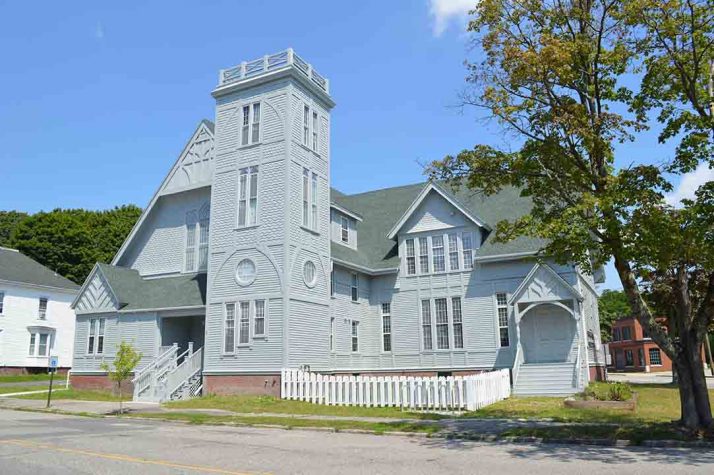 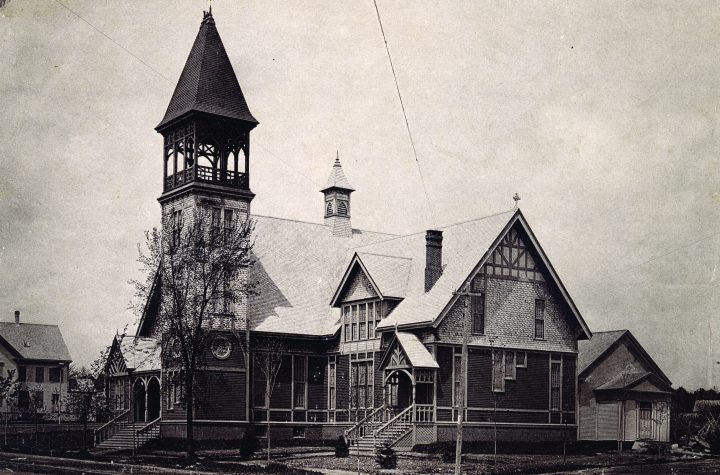 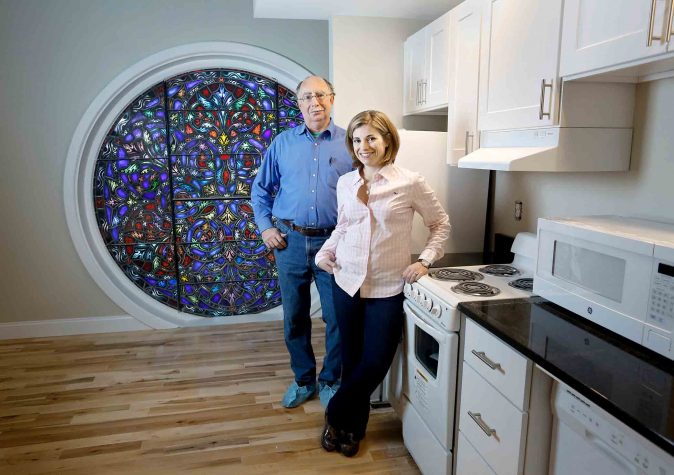 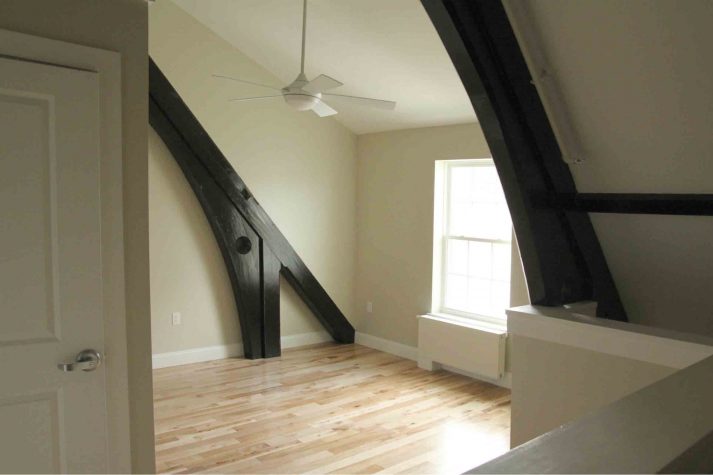 Some of the apartments include distinctive elements of the old church sanctuary, including buttresses. 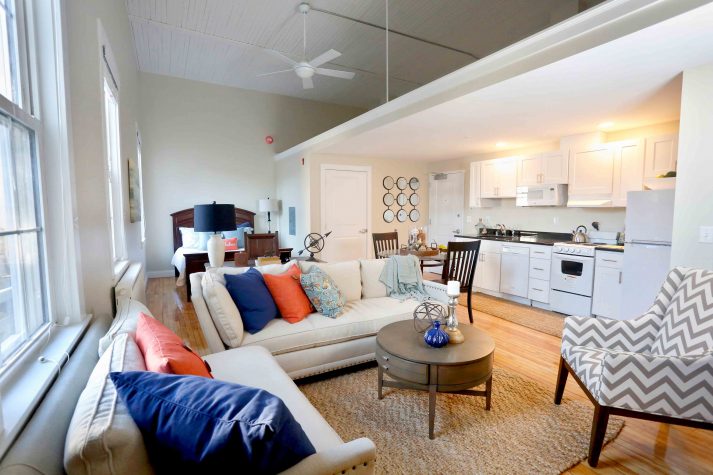 Most of the welldesigned apartments at the Clark on Pleasant include a loft storage area, made possible by the high ceilings.

When the Methodist Episcopal chapel on the corner of Forest and Pleasant Avenues welcomed its first congregants in 1857, the Woodford’s Corner neighborhood then belonged to the town of Deering. Designed by prominent Portland architect John Calvin Stevens, the Queen Anne–style church featured half-timber framing and a sharply pointed steeple above a latticework bell tower. By the time Deering was annexed by the city of Portland in 1899, the enlarged chapel had been renamed Clark Memorial Methodist Church in honor of local physician Dr. Eliphalet Clark, who cofunded the addition.

A century later, the dramatic steeple and bell tower were long gone, and Clark Memorial’s congregation had dwindled to a fraction of its once robust size. In November of 2014, the building was listed for sale. “There is too much overhead,” the pastor, Rev. Dr. Margaret Sheffield, told the Portland Press Herald when the sale was announced the following April. The buyer was Bob Gaudreau of Hardypond Development, who saw the possibility of reimagining the church for residential use. He turned the project over to his daughter, Deirdre Wadsworth, who had recently become president of Hardypond Construction, the business he founded in 1990. Working with Maine Preservation, Greater Portland Landmarks, and Cumberland-based architect John Shields, Wadsworth and Gaudreau developed a plan for 25 apartments. They filled in the three-story sanctuary to create three floors, while keeping the architectural integrity of the space intact, including the round Tiffany stained-glass window, wood beams, and buttresses, all of which have been incorporated into the new apartments. “The place is rock solid; it was really well built, and for a lot of years was really well taken care of,” says Wadsworth. “We removed the less desirable additions that were not characteristic of the original building and we kept as much of the personality of the structure as we could.”

The transformation took about a year and was completed in early 2018. A glassed-in vestibule with what Maine Preservation dubbed an “unsympathetic” front door was removed. The parish house was separated from church, updated, and sold as a single-family home. Dormers were added along the roofline to bring in light, and the vinyl siding that covered the entire building was peeled away, revealing a pleasant surprise. “The beautifully detailed wood shingles underneath were really well preserved,” Wadsworth says. “To bring the exterior back to its original look we just had to clean it up and paint it.”

The apartments, all except two of which are efficiencies or studios, are bright and inviting, and each one is unique. All have hardwood floors and open kitchens arranged along one wall with white, Shaker-style cabinetry and sleek black quartz countertops. “We kept the original hardwood on the first floor, and the distinctive architectural elements, but we also wanted you to be able to recognize what’s old and what’s new,” says Wadsworth. “We mixed the modern aspects—the kitchens, light fixtures, and bathrooms—with what’s old, so that the look is distinctive and eclectic, not cookie-cutter.” In some units, half- or three-quarter-height walls add privacy to bedroom areas, and most have loft-like storage areas, an important feature since the building doesn’t have storage elsewhere. “Knowing that people didn’t have that much space, we wanted to make sure that all aspects of living could fit,” she continues. “Where we had the ceiling height it was easier to build in a mezzanine, so that people could have their stuff accessible.

Now known as Clark Lofts on Pleasant, the former church has been painted dove gray, which accentuates the exterior details. A white picket fence surrounds a community garden tucked into a sunny corner. Once again a landmark of which the neighborhood can be proud, the building received a 2018 Honor Award from Maine Preservation. “There hadn’t been anything like this in Portland before, and we got to think about everything for the first time,” says Wadsworth. “There were some cool things we were able to do, and it came together beautifully.” The following year, having sold the Clark Lofts on Pleasant to real estate investor Suzanne Hanson (brokered by Vitalius Real Estate Group), Wadsworth and Gaudreau received a second Honor Award for another, very similar project, the transformation of Notre Dame de Lourdes Church in Saco into the Cutts Avenue Apartments, which has 19 units. “On one side of it we’ve built a modern apartment building, and the plan is to build another one on the other side,” says Wadsworth. Renderings show the restored church centered between the new buildings like a vintage jewel in a modern setting. It’s a juxtaposition that works because of thoughtful design and mindful construction practices, both of which are characteristic of Wadsworth and Hardypond’s ethos. “Portland needs housing, and it’s a drop in the bucket, but it’s something, and we didn’t tear down a beautiful old structure,” she says of the Clark Lofts on Pleasant. “It’s been well received, and we’re gratified to be a part of it.