The Art of Illumination

Designer Julie Morringello makes lights that are nimble, sculptural, and, of course, practical. 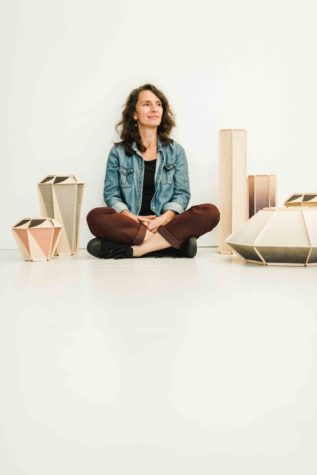 Designer Julie Morringello lives and works in a barn-turnedstudio next to her Stonington farmhouse. 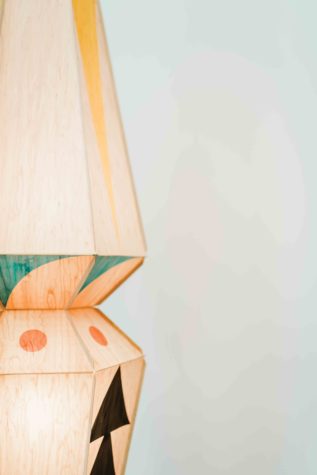 The patterned light fixtures are part of her Light Totems series created for an exhibition at the Society of Arts and Crafts in Boston. 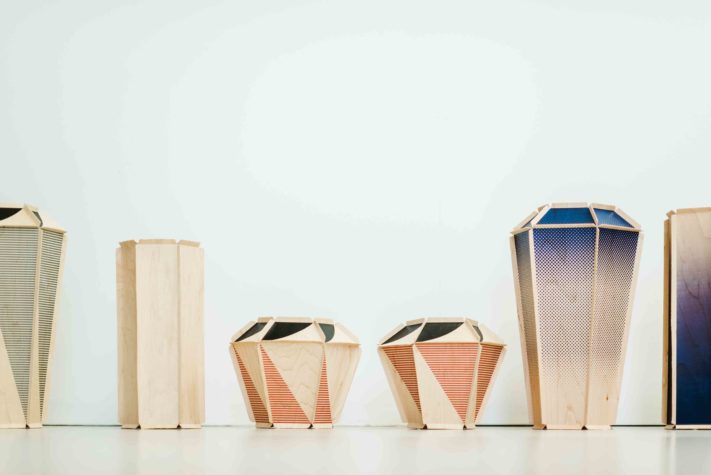 Morringello’s light fixtures are made of three layers of maple veneer laminated onto a whisper-thin sheet of plastic, a material that allows her to explore the sculptural and geometric possibilities of design. 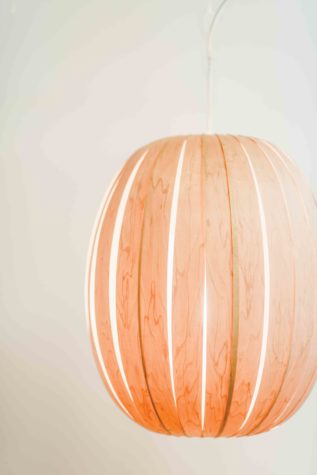 Morringello named this particular design Kiwi, recalling the shape of the fruit. 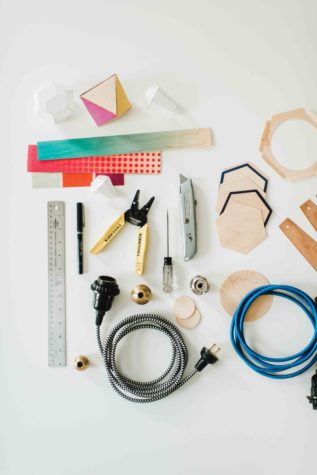 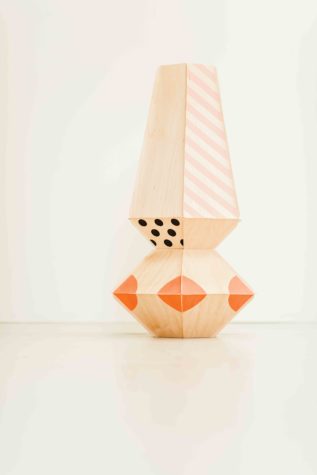 One of her patterned designs, called Orange Crush.

Julie Morringello has been bending and shaping wood into functional works of art—furniture, sculpture, and now lighting—almost as long as she can remember. These days, as the founder of Modernmaine, she has a growing reputation as a designer of light fixtures that are artistic, agile, and elegant, and that seem, improbably enough, almost weightless.

Morringello’s light fixtures evoke the work of some of modernism’s great masters—Alvar Aalto, Charles and Ray Eames, Isamu Noguchi—yet they are also very much of their own time and place. They are made of a laser-cut maple veneer that she carefully shapes into light-as-a-breeze functional sculpture.

Her workshop is in the barn that adjoins the circa-1875 farmhouse in Stonington that she shares with her husband, Eugene Koch, a painter who is also an administrator at the Haystack Mountain School of Crafts, and their eight-year-old daughter, Mitike. She has lived on Deer Isle since 2000 when she moved to Maine from New Bedford, Massachusetts, where she was part of an artist’s collective. There she designed furniture and other functional objects, which has been not so much a career path as a lifelong passion.

“As a child I had a one-inch-equals-one-foot dollhouse that I loved to work on,” says Morringello. “My mom would buy miniature furniture kits for me, and I found them incredibly frustrating. The pieces were so ugly and poorly crafted that I finally wound up buying balsa wood and making my own furniture.”

From there, it was an easy next step to an after-school job in an architectural model making shop. “Starting out, I was the chief tree-maker. Later I learned how to use the table saw, how to cast plaster and resin, and all kinds of wonderful things about the creative use of materials,” she recalls.

Those early experiences charted her future. Morringello holds both bachelor’s and master’s degrees from the Rhode Island School of Design, and except for a “brief blip” when she remodeled houses—“it was important for understanding how houses work,” she says—she has spent her life in design. For a number of years, she focused on woodworking and full-scale furniture, but then she got restless.

“I really wanted to shake up my studio practice,” she says. And so in 2011 Morringello began to work in lighting design and founded Modernmaine. In lighting, she found her niche. It fascinated her. “I’m a materials-based designer,” she says, “and I wanted to experiment.” She made light fixtures of man-made materials like Tyvek and acrylic, but they didn’t quite give her the sculptural quality she yearned for. She found it in a delicate three-ply maple veneer that combines wood and translucent plastic on the outside. “My earlier lighting incorporated Tyvek and non-woven fabrics. I do still make a few designs in Tyvek, but lately I’ve been fascinated by the wood material that you see in most of my recent work,” Morringello says.

Along came the evanescent, airy designs that Morringello is now known for. In 2017 she was named one of the Society of Arts and Crafts’ Artists of the Year, an award that came with a commission for a series she calls Light Totems, which incorporate color and pattern with “strong, angular, geometric shapes.” Morringello’s Light Totems were exhibited at the Society of Arts and Crafts in Boston in 2018. This past summer, some of her more conceptual work was on view at the Institute of Contemporary Art at the Maine College of Art in Portland as part of an exhibition entitled The Darkness and the Light.

Morringello’s design process is detailed and comparatively arduous, but it starts with a pencil and paper. “I keep an active sketchbook,” she says. “In the early design stages I also make lots of small, quick paper models held together with Scotch tape. As I continue to develop an idea, I’ll head to the computer to create more refined patterns and more paper models. Finally, I’ll make a full-scale prototype out of poster board, which I do for every new design I create. The prototypes give me a good sense of scale and are great to have around the studio to refer back to.”

She sources the maple veneer from the Midwest and relies on a small family firm, R. C. Brayshaw and Company, in Lebanon, New Hampshire, for the digital crafting if she is working in multiples. She will fabricate and assemble one-off pieces or smaller commissions by herself. “The heart of my inspiration lies in an investigation into materials and their fabrication techniques,” she says. “Layered on top of that are a host of other things—all of the practical concerns like function, light source, hardware, etc. I love architecture and interior design and avidly follow what is going on in those fields.” Most of her current work is monochromatic, but the Light Totems has the addition of color. For the totems, Morringello created stencils and then applied the patterns with tempera paint, a process she termed “enjoyable but labor-intensive.”

On a given day she’ll get her family off to school and work, then head either to her “pretty dusty” barn workshop or a second studio space just across the street in the Island Community Center, where she can show clients her work. Many customers find Morringello through her website (as is so often the case these days), but if you are in Stonington, you can see it firsthand at the Stonington Opera House, Lily’s House (a Thursdays-only wine bar), or 44 North Coffee 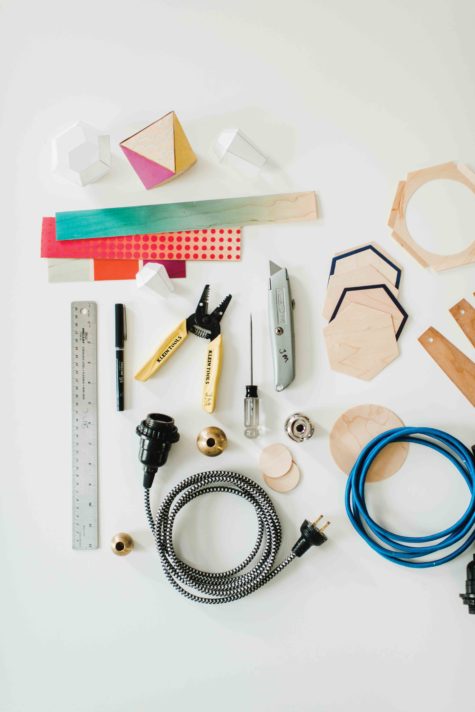 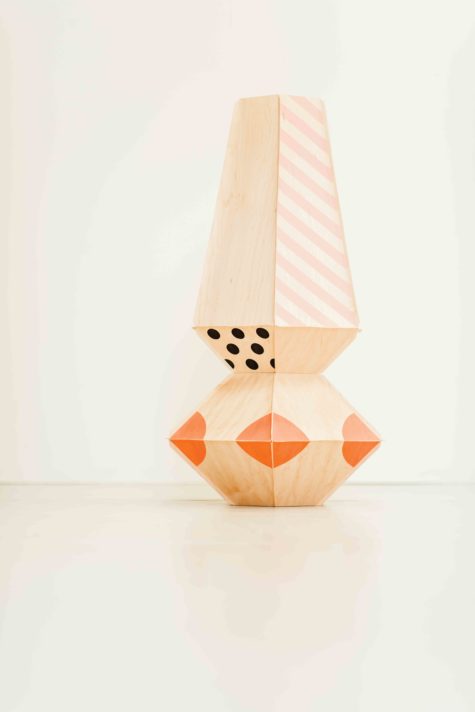 One of her patterned designs, called Orange Crush.