Let the House Tell Its Story

A renovator and a homeowner open up a historic home

“I love hydrangeas and boxwoods for landscaping historic homes,” says renovator Carrie Hansen. In addition to the plantings, she installed a new bluestone walkway in place of an uneven stone path and added granite steps. “They gave the house a grandeur,” she says.

Nearly a century after it was designed by John Calvin Stevens, the home was renovated to retain its elegant look and historic elements, while creating space for modern life. Custom storm windows improved the home’s energy efficiency while retaining the historic windows on the inside.

The sunroom at the back of the house offers views of the ocean in winter. The vintage barley-twist table in the center happens to match one the previous homeowner had used in the same space.

Homeowner Lorin White and her sons, Asa and Ross, enjoy a screened porch that looks out over the backyard garden.

The Whites brought most of the furnishings, a mix of family heirlooms and antique-shop finds, from their previous home in Mississippi. Walls painted in Benjamin Moore’s Wickham Gray provide a bright, neutral background.

While the home is trimmed and furnished in a way that respects its historic character, playful touches are introduced through lighting fixtures and artwork.

“I believe in timeless decorating,” says the homeowner, “so the decor in the boys’ rooms now can carry them until college.”

“I believe in timeless decorating,” says the homeowner, “so the decor in the boys’ rooms now can carry them until college.” 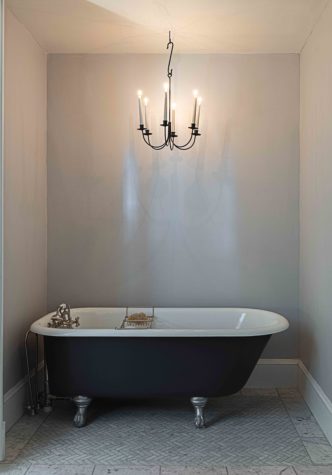 The bathrooms were refinished with period-appropriate Carrara marble and fixtures sourced from architectural salvage shops.

Hansen had a steel beam installed to replace a load-bearing wall and found that the flooring of the rooms didn’t match up, leaving a “quilt of flooring” that reveals the original architecture.

The kitchen sink found a new home in the owners’ bathroom.

The living room’s inviting fireplace and warm lighting make it the place where the family most often gathers and entertains.

The homeowner built a chicken coop from materials left over from the home renovation.

The dining room features a round mango wood table from Four Hands that fits the room so well the current owners bought it along with the house. The buffet dates to the 1940s, and was made by a North Carolina furniture company that sourced lumber from the homeowner’s grandfather’s sawmill.

The kitchen is finished in Hansen’s preferred navy and white palette, and opens onto a screen porch that extends the space in warm weather.

In 1925, Portland architect John Calvin Stevens designed a family home in Falmouth Foreside. To take advantage of ocean views, it was angled on the lot, and the back side was covered with windows. In contrast to some of Stevens’s more ornate works, this home had a simple shape, with a tall, double-peaked main house and a lower section with space for servants’ quarters. Its original owners were Franklin C. Payson, a founder of the Portland Company, and his wife, Grace, a member of Falmouth’s prominent Brown family. Throughout the twentieth century the home remained in the Brown family. “The interior stayed much the same, and the exterior maintained its classic ‘cottage’ look, with natural shingles and pale gray-blue shutters,” says a member of the family who lives nearby today.

Then, in 2015, Carrie Hansen found the home. After starting her career in fashion merchandising, Hansen has spent the past 20 years buying, restoring, and selling homes. “I don’t exclusively renovate historic homes, but I love restoring them,” she says. “My passion is the historic home.” The house had been built as a summer residence, so before moving in with her family, Hansen took care of “those not-so-sexy things that needed to be done to take it from summer to winter,” adding insulation and storm windows. “Often in older homes those beautiful old windows are torn out and replaced,” she says. “I’d prefer to replace the ropes, pulleys, and broken glass.” She chose Marvin custom storm windows to increase the windows’ R-value without sacrificing the original glass. The other major change was opening up the floor plan. “These beautiful historic homes are traditionally very chopped up,” she notes. Combining three small rooms created a generous open kitchen (if you look down, you’ll notice the flooring change where the rooms used to meet). On the second floor, what were once maids’ bedrooms were combined into what’s now a playroom and art room—with two doors as reminders of how the space was once divided. “I believe in letting the house tell its story,” says Hansen.

After Hansen’s renovation, the home retains many of its original elements, though not always in their original places; the kitchen sink, for example, found a new home in the owners’ bathroom. “That house had so much of the original character—probably more than any house I’ve ever done,” she says. “Beautiful banisters, that butler’s pantry sink. I try very hard to keep original features in the house. I might move them, but I try to keep them on-site.” But she struggled with the paneling. “All the woodwork was dark brown. It was original; it hadn’t been painted, so I was hesitant. I started with one room and, ‘Ta-da!’ It just elevated the house.” She chose historic colors—Wickham Gray, Stonington Gray, and Revere Pewter by Benjamin Moore—that reflect the natural light and make the home feel airy and spacious.

Current homeowner Lorin White, who bought the home with her husband, Elbert, last year, identifies the light as her favorite quality. “Every different part of the day, the light filtering in through the windows is so dramatic and beautiful and delicate. It’s probably because of the paint Carrie chose, but also because John Calvin Stevens knew how to place windows, and how to place a house on a lot so you get the sun every part of the day.” The Whites met in Portland; Lorin was waitressing while working as a nurse, and Elbert was on vacation with friends and happened to walk into her restaurant.

They married on Great Diamond Island, but they spent the first part of their marriage and of Elbert’s medical career in his home state of Mississippi. An opening for a neurosurgeon at Maine Medical Center gave the Whites the chance to return to Maine, and they moved to Falmouth with their two boys, Asa and Ross, their two golden retrievers, and 13 chickens. “It’s been amazing,” says Lorin. “They [the boys] love it. There’s so much for them to do—they love the snow in the winter, they love being in the ocean.”

Being in Maine has given Lorin the chance to embrace coastal themes in her decor. “It just didn’t work in Mississippi,” she says. Rope is a prominent motif, with large monkey’s fists arranged on sideboards, lamps hanging from thick cords, and baskets and rugs evoking coiled and woven jute. On the walls, paintings of sailboats are set off by gold frames that I assume were made to match, until Lorin tells me she found them at various Mississippi antique shops. The art in the home is an eclectic mix—still lifes and ocean scenes as well as striking contemporary works, like a painting of Biggie Smalls by Portland artist Josh Christy—but it hangs together, sharing elements of bold color and chunky yet graceful shapes. A different note is struck by the large painting in the living room, an earth-toned, abstract depiction of a bride that Elbert commissioned from Memphis artist Neely Woodson Powell and gave to Lorin as a first anniversary gift.

Lorin is a quintessential DIY-er. The glass-fronted cabinets in the kitchen hold a few jars of last year’s tomatoes; it’s almost time to can this year’s crop from the big backyard garden. She tells me about when she was a kid and sawed her bunk bed in half to make it into twins, and shows me a mirror she edged with an oval of rope (she doesn’t know yet what to do about the glass corners). But the thing she most likes to show off, she says, is the chicken coop. Not long after the Whites arrived in Maine, a windstorm blew down three trees on the property—and they landed on the chicken coop. To house the surviving chickens, White gathered the materials left from the house renovation. “I said, ‘I’ll just build myself a chicken coop with this scrap wood I have, and let the wood dictate the measurements.’ I spent $41 on a tin roof and screws.” Making it a point of pride to spend as little as possible, she did all the construction using only the tools she had. “I used my handsaw and my drill and got it done. I can stand up in it, and it fits all my chickens perfectly.” White likes that the chickens now live in luxurious accommodations, complete with nesting boxes and roosting poles, that can be considered an extension of the main house, built out of the same parts and painted the same color.

With chickens pecking their way around the yard, kids and dogs running over the old floorboards, and parents enjoying the ocean view through the restored windows, the century-old house is full of life, light, and beauty. “Nothing makes me happier than selling a house to someone and seeing them elevate my design,” says Hansen. I hope that, if John Calvin Stevens could see his work today, he would feel the same. The rooms are bigger, the walls are brighter, the kitchen sink is in the bathroom, but the structure and the vision remain, ready to hold new stories.

Homeowner Lorin White and her sons, Asa and Ross, enjoy a screened porch that looks out over the backyard garden.

The kitchen sink found a new home in the owners’ bathroom.

While the home is trimmed and furnished in a way that respects its historic character, playful touches are introduced through lighting fixtures and artwork.