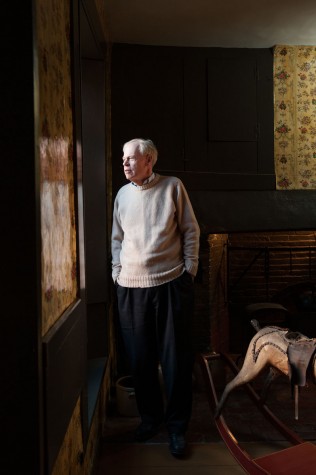 As Maine state historian, Earle Shettleworth has spent years studying and visiting the historic homes throughout the state. Here, he poses in the Wadsworth-Longfellow House in Portland. 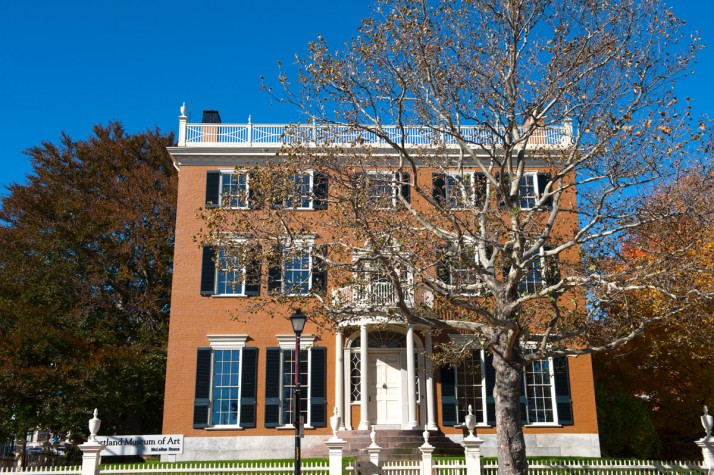 When discussing Portland’s historic architecture, Shettleworth is quick to recommend a visit to the McLellan House. Built in 1801, this Federal-style three-story mansion is now owned and operated by the Portland Museum of Art. 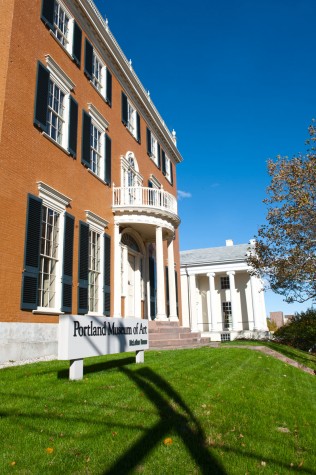 Earle Shettleworth, the longest-serving state preservation officer in the country, has just retired after 42 years. Now, the Maine state historian is ready to follow his “passion projects” and blaze his own trail.

Earle Shettleworth was 15 years when he gave his first lecture. At an age when most boys are more concerned with popping wheelies and teasing girls. Shettleworth stood in front of an audience at the Portland College Club and delivered a lecture on the history of Portland architecture. The Maine state historian is now 67 years old, but he recalls his first experience with public speaking the same way he remembers a striking photograph or a piece of art: with remarkable clarity. “I wasn’t nervous,” he says. “I was always very interested in dramatics, and I observed the debate team frequently. And it was a topic I had been reading about for years. I was ready.”

By the time Shettleworth graduated from Deering High School in 1966, he had delivered more than 100 lectures. He would go on to give thousands more over the years on a wide range of topics, from pre–Civil War Maine photography to the rise of modern architecture in Maine, in addition to publishing over 100 articles and numerous books. “I have always been fascinated by history, ever since I was a child,” he says. Growing up, Shettleworth spent summers with his family in Skowhegan. At the age of seven, having graduated from the children’s section to adult fiction, Shettleworth was browsing the shelves of the public library when he chanced upon a historical novel by famed American writer (and Kennebunkport native) Kenneth Roberts. “The more I learned, the more my interest in history grew,” he says. “On one level, it has always been an intellectual journey, a deep curiosity that I wanted to satisfy.”

These days, Shettleworth doesn’t read much fiction. He doesn’t have time. Although he may have officially retired from his position as director at the Maine Historic Preservation Commission – after 42 years, Shettleworth was the longest-serving state preservation officer in the country – he is by no means done working. For one thing, he continues to work as the state historian, a post he has held since his 2004 appointment by Governor John Baldacci. “I don’t feel any sadness about retiring,” he explains. “I had been planning to retire for some time. I feel very fortunate that I can continue to work on projects that excite me.” He views his work as state historian as an “extension of what I’ve done over the years, though the focus is more general, whereas my earlier work focused almost entirely on art and architecture.”

This move, from visual material to general history, reflects a change in Shettleworth’s personal interests. What started as a passion for historical fiction morphed quickly into a fascination with Maine’s visual history, particularly the built environment, which he deems “essential for having a good quality of life.” He chased this interest from the halls of Deering High School to the campus of Colby College, where he majored in art history, and he went on to earn a master’s degree from Boston University in architectural history. (As though there weren’t enough letters following his name, Shettleworth also holds honorary doctorates from Bowdoin College and the Maine College of Art.) As for why he chose architecture, Shettleworth doesn’t have a simple answer. Instead, the seasoned historian is eloquent and thoughtful in response: “Our built environment is what gives us character and identity,” he says. “It is what differentiates the state from other parts of the country, what makes a place feel distinctive. And that’s vital in any community that relies on tourism as a source of income,” he adds.

As the years pass, Shettleworth finds himself as intellectually curious as ever, but now he’s turning his sharp eyes toward new topics. History, he believes, is an essential part of any education and a useful tool for understanding the future. “This may be trite to say, but I believe it to be true: It is important to know one’s history,” he says, his refined manner adding gravitas to the statement. “History is a crucial guide to decision making. You need to know where you have been to know where you are and where you are going.” During his career at the Maine Historic Preservation Commission, he needed to know and understand visual and cultural history in order to make qualitative judgments about which buildings and landmarks were worth preserving. Now, he seeks not only to preserve history but also to build on our knowledge of the field, adding his insights and understanding to form a clearer picture of the past.

In conversation with Shettleworth, the breadth and depth of his knowledge feels staggering, even a little intimidating. When asked about his favorite historic buildings in Maine, he launches into a list of seven homes, organized by period and by location. He begins by describing the McIntire Garrison House in York, built between 1707 and 1712, and ends with a brief description of Fortune Rock on Somes Sound, designed by Philadelphia architect George Howe and built from 1937 to 1939. Shettleworth calls Fortune Rock the “Maine coastal counterpoint to Frank Lloyd Wright’s Fallingwater.” Struggling to process the deluge of information, I remark that his list seems to be composed of homes—does he prefer private residences to public buildings? “Oh no, not at all,” he assures me. “It’s just that those came to mind quite quickly.”

Right now, Shettleworth’s nimble brain is occupied by several topics—“passion projects,” he calls them. As we approach the hundredth anniversary of World War I, Shettleworth is working to produce a pictorial lecture on the Maine home front during the conflict. He is also working to catalog and organize thousands of examples of early Maine photography. In his office, which is located in the fittingly lovely Captain Isaac Gage House in Augusta, his desk is covered in images of Monhegan Island from the 1930s. “The more things change, the more they stay the same,” he remarks, holding up a picture of lobster traps on the beach. When he has completed this massive task, he wants to begin a study of cemetery buildings in Maine, modeled after his earlier project photographing and documenting the Civil War monuments scattered throughout the state.

For Shettleworth, Maine has always been home, and it has provided a rich backdrop for his intellectual wanderings. I ask him if he ever worries about the future of his beloved state. He looks at me seriously. “In every generation, throughout Maine’s history, Maine has always regenerated itself and reinvented itself. It will continue to do so,” he says. “Consider our beginnings: Maine was literally a buffer zone between French Canada and British New England. We were the frontier. We still are.” And when it comes to taming, naming, and understanding that frontier, Shettleworth is on the very forefront, intrepidly moving forward in his lifelong task to uncover the past. 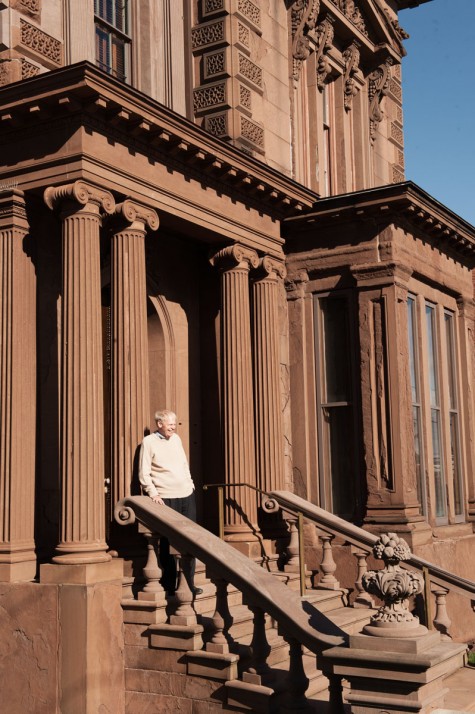 Shettleworth stands on the steps of the Victoria Mansion, an Italianate-style Victorian- era house and museum located in downtown Portland. 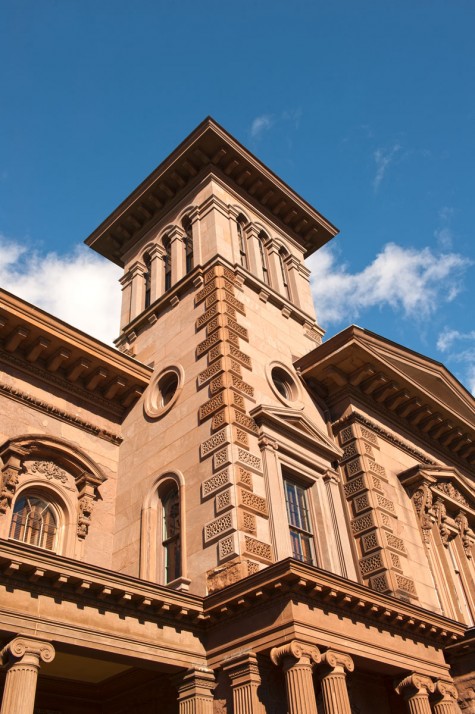