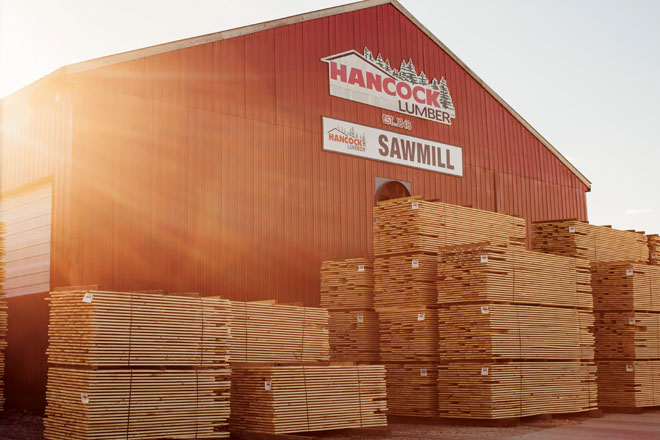 Hancock Lumber is an important part of the Maine landscape. 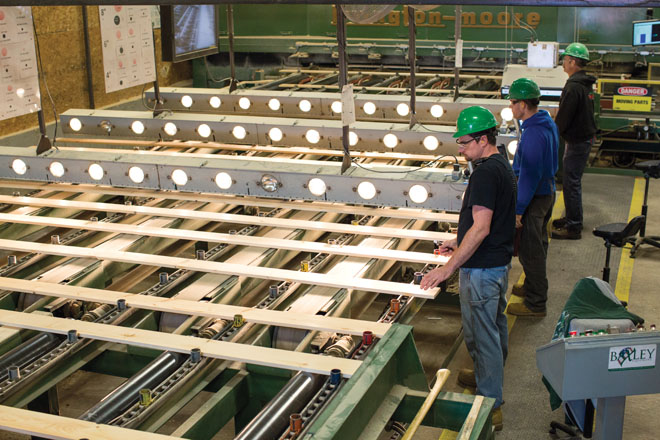 In Maine, Hancock Lumber is part of the landscape. The logo breezes by on trucks carrying freshly cut boards from Hancock sawmills and on signs over retail lumberyards in towns scattered throughout the hills and lakes and along the coast. Hancock Lumber employs over 400 people. Its sawmill division is one of the largest manufacturers of eastern white pine boards in the world. Many Mainers have built their shelters out of Hancock’s products. Others have passed afternoons exploring the 12,000 acres of forest Hancock opens to the public. Established in 1848, the company is a sixth-generation family- owned business, and one of the 100 oldest family businesses in the United States. Most of us are at least vaguely aware of the company’s longstanding history in our state and, as the company continues to thrive in the era of the big-box store, view it as a point of pride: Hancock Lumber is alive and well here, thanks in no small part to its CEO, Kevin Hancock.

Kevin Hancock’s office at the Hancock Lumber headquarters in Casco looks out over Pleasant Lake. From beside my seat at the table along one side of the spacious room, there are bookshelves filled with basketball trophies and professional photos of his college-aged daughters, Abby and Sydney, as well as a picture of himself with his wife, Alison, posed prom-style for a snapshot taken at a local business event. There is an elk head mounted on the wall, and a pine sapling in a burlap bag. The room reads masculine, western Mainer, family man—and while all of those qualifiers fit, so do a hundred more. Hancock has kind eyes, tan skin, and a leather bracelet around his wrist. He is self-assured but not overbearing; he’s forthcoming about his inner life. While he talks, his hand hovers over a notepad, miming writing. He speaks carefully, deliberately—not for the sake of self-censorship but out of a clear desire to say precisely what he means. He tells a story that boils down to this: had I visited this office 10 years prior, I would have met a quite different man.

Kevin Hancock was born and bred in Casco, the eldest son of Hancock Lumber president David Hancock. He played basketball in high school and then in college at Bowdoin, where he studied history. After graduating he took a job coaching and teaching at Bridgton Academy, which he saw as the first stepping-stone toward his career goal of coaching Division I basketball. But in 1991 his father was diagnosed with cancer. Rather than take a coaching opportunity in Illinois, away from his family and his home state of Maine, Kevin went to work behind the front counter at the Hancock Lumber store in Yarmouth, learning the ins and outs of the family business and gradually taking on more responsibility. In 1997 David Hancock passed away. In 1998 32-year-old Kevin Hancock became president of the company—a role he’d never imagined for himself growing up, but one he had convinced himself he was ready for.

In his first decade as president, he led the company through a period of steady growth. But in 2007 the economy crashed, and housing starts dropped by nearly 70 percent. With much of Hancock Lumber’s customer base low on work, the company started to look for markets more broadly, capitalizing on export opportunities that allowed it to maintain a high level of production in the mills to make up for the lack of local retail business. In the end, the company pulled through, but just barely. In 2010, before they were out of the dark, Kevin Hancock found himself speechless—literally.

Spasmodic dysphonia is a neurological voice disorder that causes the muscles around the voice box to contract during speech. It manifests differently and to varying degrees in each individualwho acquires the disorder, but at its worst, Hancock compares the sensation to being strangled. “Sometimes I’ll only get a couple of sentences out before I run out of air. It becomes a significant athletic feat to have a conversation with somebody,” he says. In pain, uncertain of how he was going to help run a company without the consistent use of his voice, at first he did what he’d always done: “I put my head down, and bulled my way through,” says Hancock. “But I wore myself out.”

In 2012 the economy stabilized and Hancock found a moment to catch his breath. Around that time Hancock came upon an issue of National Geographic with a cover story about the Pine Ridge Indian Reservation. “I think I want to go there,” he said to Alison, speaking the realization as it came to him. Knowing his love of history and the American West—and knowing how much he needed an outlet—Alison encouraged him to go. Having read about the dramatic housing problems at Pine Ridge, Hancock thought that the lumber company might be able to help, but here he adamantly clarifies that his ultimate motive was not purely altruistic: “I was really there for me.” More specifically, he was there to do the scary work of looking inward and discovering who he was, apart from the president of Hancock Lumber.

In the following years, Hancock would take six trips to the vast, treeless plains. What he discovered there is presented in great detail and beauty in his book Not for Sale, which Senator Angus King describes as “part spiritual journal, part moving portrait of some extraordinary people, and part leadership manual.” Among other things, his time on Pine Ridge taught Hancock to view the trouble with his voice as a blessing. “When you can’t talk, you listen,” he says. “I started to realize that my job as a leader is to strengthen the voices of others.”

Had I visited Casco 10 years ago, I would have met the president of Hancock Lumber. Last fall, I was lucky enough to meet Kevin Hancock himself. Hancock makes a point of differentiating between the person and the position—for his own well-being, and for the well-being of the people who work there as well. For the past few years, Hancock has tried to create a work environment where all employees have the opportunity to lead, to make decisions, to say what they think, and to live rich, fulfilling lives that are separate from the jobs they do.

That effort has yielded both quantitative and qualitative results. Drive by any Hancock Lumber location, and in addition to that familiar logo you’ll now see a sign celebrating the fact that the company has been named one of the best places to work in Maine for the second year in a row. “I love the award because it has nothing to do with me giving a speech or writing an essay about why I think Hancock Lumber is a great place to work,” says Hancock. “Everyone in the company takes a confidential, third- party-administered survey. The award is based on what the people who work at the company are actually experiencing.”

Driving home, pondering all that was said and all the ways in which Kevin Hancock pleasantly surprised me, I get a little lost. Eventually, I run into another Hancock Lumber location, so I decide to check it out. I pull into the parking lot and flip open my notebook. Before our meeting, I had written down a line from Not for Sale that reads, “We all come from a tribe, and while the pull of the past is strong, the soul is here to individuate.” Next to that, I write, As far as modern Maine tribes go, Hancock Lumber is a pretty indomitable one. Hancock is proud of his family’s legacy, but he knows that the best way to lead Hancock Lumber into its third century is by being his own man. So far, so good. 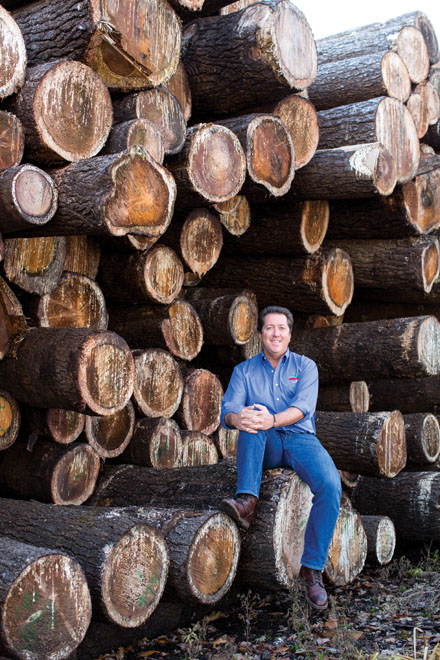 Kevin Hancock grew up to become the sixth generation of Hancocks to run the family lumber business. His book, Not for Sale, details his life- changing experiences at the Pine Ridge Reservation in South Dakota and the lessons he’s brought home to Maine. 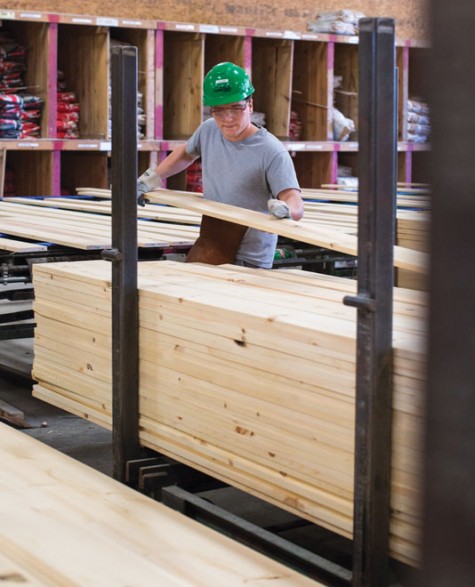 A sawmill employee sorts finished eastern white pine boards that will be packaged and shipped to a customer.