After years if working on the periphery of the Maine art scene, graphic artist Rachel Gloria Adams is ready to bloom big 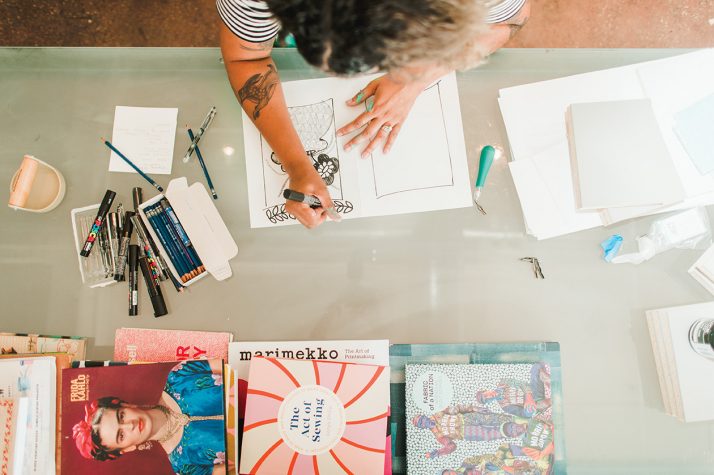 Her primary mode of art making is painting, but Adams also loves to draw, sew, and design and customize clothes. 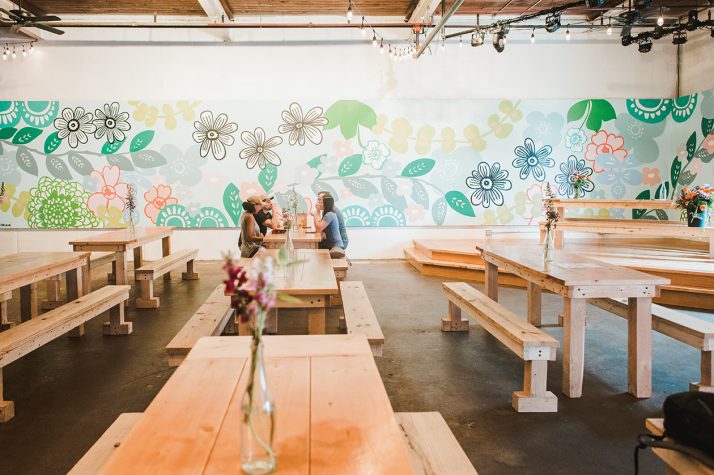 Adams’s work can be seen around town, including her mural Bloomin at Oxbow Blending and Bottling in Portland. 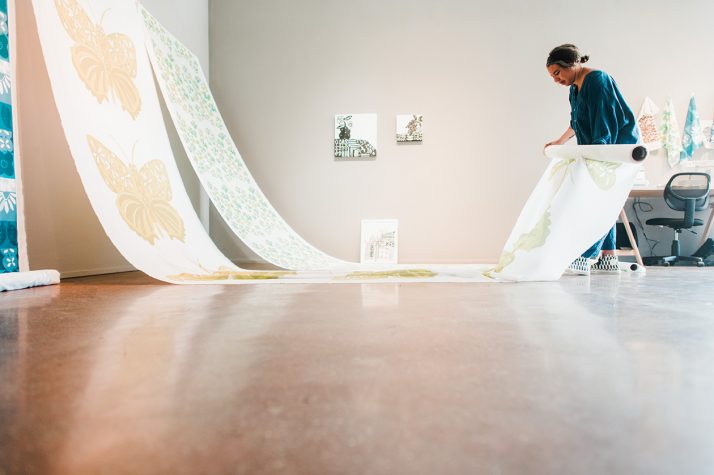 “I don’t take the fact that I have this residency for granted,” Adams says. “I feel pretty good about it, and I want to make the most of it.”

Shopping for my toddler daughter is hard. So much of the children’s clothing available is extremely gendered, with hot pink sparkles and crown patterns on the “girls” clothes and trucks, footballs, and monsters covering the “boys” clothes. I’m always looking for sweet, fun, colorful kids’ gear—things that aren’t too dissimilar to my favorite weekend outfits. Artist Rachel Gloria Adams understands this conundrum. She’s a mom, too. “I started Tachee,” she explains of her Portland-based clothing line, “because I knew I was either going to do stuff for myself or for my girls.”

I met Adams in the large space she’s currently using at Speedwell Studios on Forest Avenue. “I don’t take the fact that I have this residency for granted,” she says. “I feel pretty good about it, and I want to make the most of it.” We’re surrounded by examples of Adams’s work in various states of completion. There are black-and-white drawings of flowers in vases taped to the wall, samples of fabric printed with crabgrass green and emerald leaves hung from nails, mural-sized paintings, and a table strewn with kids’ clothes and fabric dolls. Her graphic, cheerful style lends the bare-bones room some joyful warmth, a feeling that is further emphasized by Rachel herself. Dressed in her own hand-painted overalls with a patchwork pattern on the bib, bare arms decorated with tattoos, and her curly hair pulled up into a bun, Adams looks every bit the artist-slash-model-slash-designer that she is.

However, this multi-hyphenate existence is rather new. Up until June 2021, Adams was working a corporate job while her husband, muralist Ryan Adams, made the leap to the artist lifestyle. As a graduate of Maine College of Art and a longtime resident of Portland, she’s not exactly a newcomer. She’s been around, practicing art for years, but only recently has her work been getting more exposure. “As a female, as a mother, and as a person of color, I can see how people like myself could be overlooked,” she says. “But after I had my second child, I decided I wasn’t going to get into a rut.” Over the past year, Adams has been pushing her artistic practice and seizing opportunities that are suddenly bubbling up, from designing panels for a Portland Museum of Art party to modeling underwear, clogs, and apparel. She’s working to increase her visibility, save money for future endeavors, and generally create a sense of freedom and stability in her creative life. “I don’t want to feel pressure to get another corporate job,” she says.

She describes her work right now as “controlled chaos” and her decisions as “strategic.” Adams is branching out in many different directions, but the end goal is always clear. She wants to create. “Painting is my generation activity,” she says. It’s where she finds her best ideas, and it’s been part of her life since she was a little kid. Adams grew up in Massachusetts in a house decorated with framed African mud cloths on the walls and Swedish textiles on the beds. Her mother, Sharon Chandler Correnty, is also a textile artist, but when Adams was young Correnty worked as a middle school art teacher. “When it came time to figure out what I wanted to do with my time, she gave me a stack of art supplies. I haven’t stopped since,” she says.

Although the two women have their own styles, you can see the influence they have on each other. Adams says, “Even now, whenever I need a creative spark, I turn to my mom.” The two of them are doing the Speedwell residency together, which gives them even more incentive than usual to collaborate. In late summer, the mother–daughter team turned Speedwell into a pop-up shop, giving residents of Portland and visitors from away a chance to buy small-batch T-shirts, sweatshirts, bibs, and rattles. Some are adorned with butterflies and rabbits, while others feature abstract linear prints in punchy colors. “My goal is to figure out what I want to wear, and what I want my girls to wear,” she says. “Right now, the studio is a test kitchen for me.”

While Adams plans to continue releasing new seasonal designs for Tachee, she’s also interested in expanding into home goods—just as soon as she finds the right fabric. “This is good, but I think people would prefer cotton,” she says, holding up a printed piece of poly-blend that features a pattern of teal and blue flowers. The print looks like Warhol’s flowers went to Finland for a cold-water swim with Marimekko. It’s bright, modern, and quite Maine. I tell her that I’d buy a pillow with that fabric, and she looks thoughtful. “I hope people like it.” She’ll have to consider it a bit further before she starts manufacturing them for sale.

Visiting Adams in her studio, I feel a bit like I am witnessing a diver about to plunge or a bird about to take flight. A self-described “outsider” to the local arts scene, Adams strikes me as ready for an even bigger audience. The attention has been coming fast and furious lately, and she seems perfectly capable of keeping up. She’s filled with plans—to start quilting, to turn a series of quilts into a series of paintings, to launch a line of clothes for women, to start exhibiting in galleries, to sell baby quilts, to make dolls. She explains that she’s never had a problem melding her fine art, craft, and commerce. To her, it’s all part of the practice. “My brain is always looking for improvements,” she says. “It’s all about smooth systems, and financial success would help facilitate that.” She’s always in motion, always planning her next step. She’s still learning how to say no to opportunities that aren’t a good fit.

But this, too, is exciting. Adams doesn’t want to be “everywhere.” She wants to build something relatively modest: a business that can support a family. I ask her what her big goal is, thinking I’ll hear about her wildest dreams, her pie-in-the-sky ambitions. “My goal is to do this,” she says, looking around. “And only this.” I have a strong suspicion she’ll get there soon. 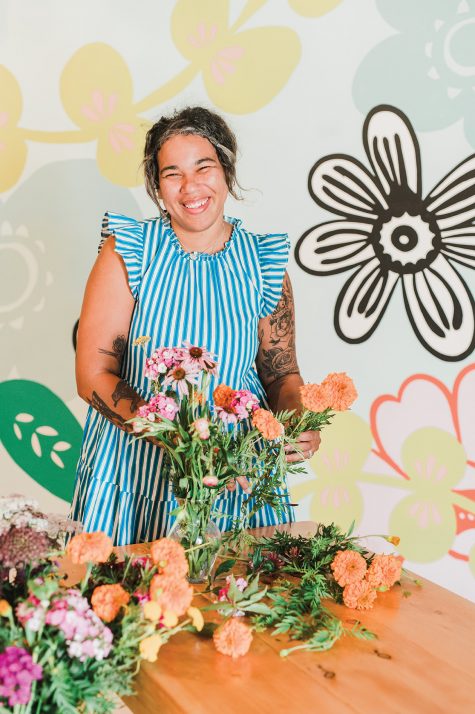 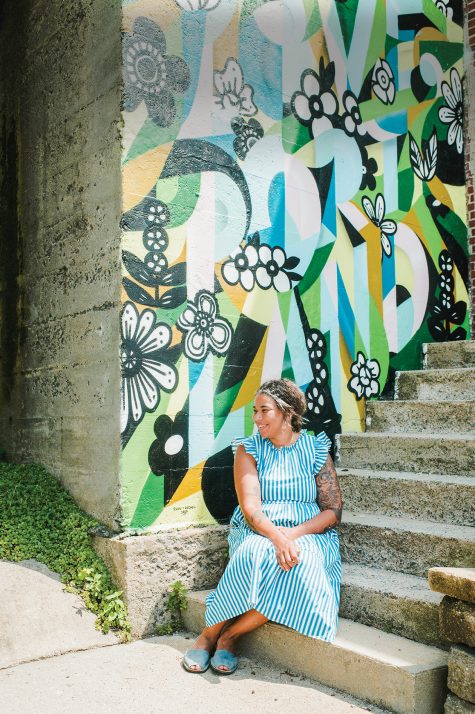 This mural, called love, Portland, was created by Adams with her husband, Ryan. 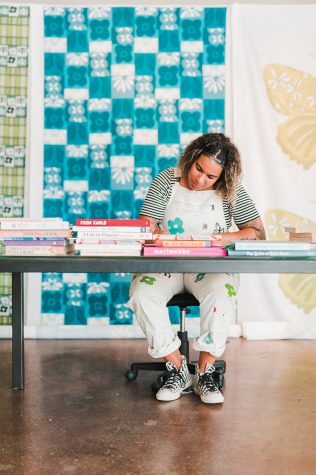 At work making patterns and prints; Adams is wearing her own hand-painted overalls that she customized. 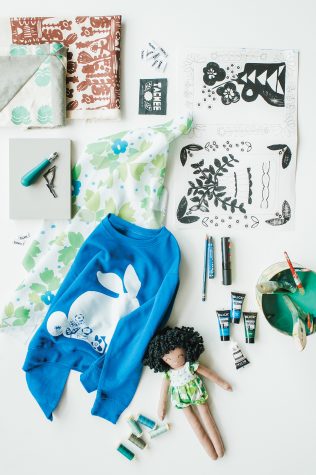 Samples from her children’s line, Tachee. 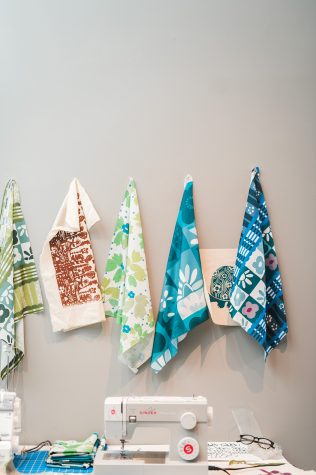 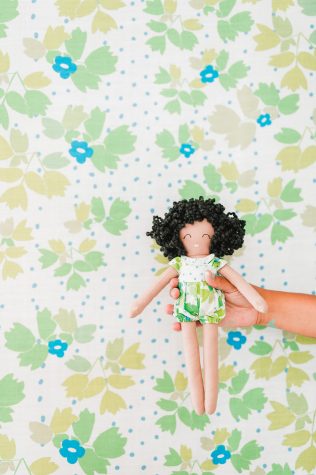 A doll made in collaboration with Linnea Company. 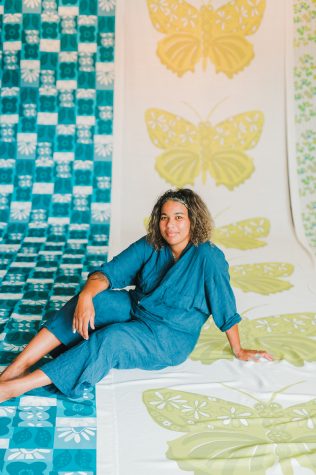 Rachel Gloria Adams sits in front of two of her patterns—Indigo Quilt, Butterfly, and Blue Cohosh—in Speedwell Studios, where she’s currently doing a residency with her mom.