Allie Norman is the bubbly, sharp brain behind Portland’s Girl That Designs. 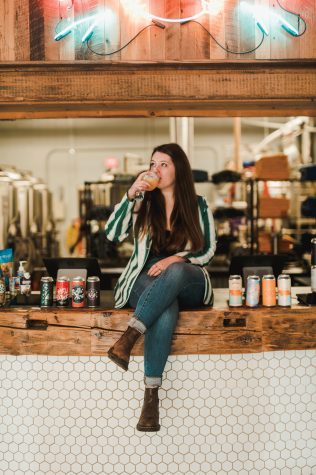 After moving to Maine in her late 20s, designer Allie Norman began building a career based on her passions: typography, beer, food, and community. 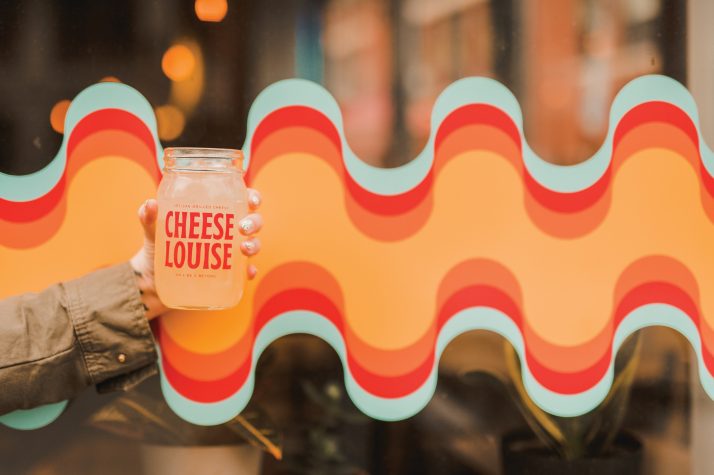 Norman has worked on product design for several local Portland eateries, like Cheese Louise in the Old Port. 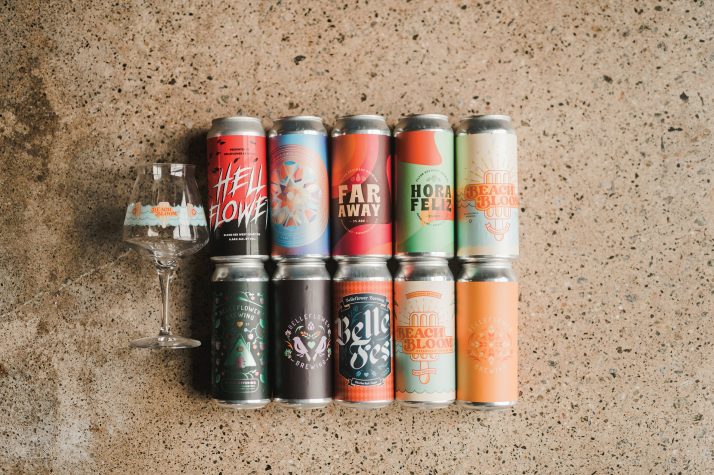 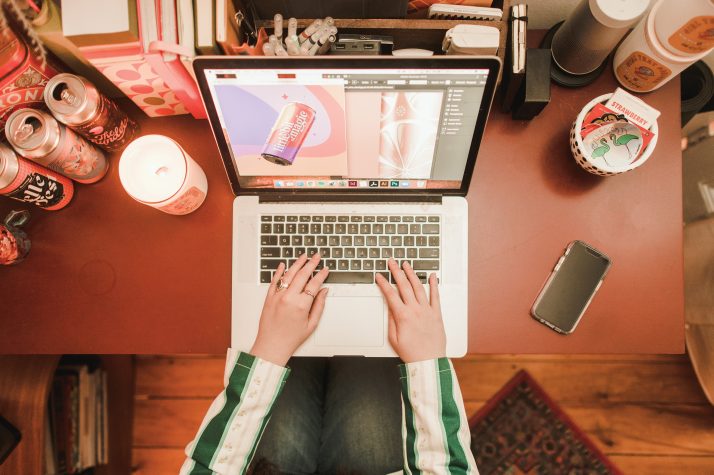 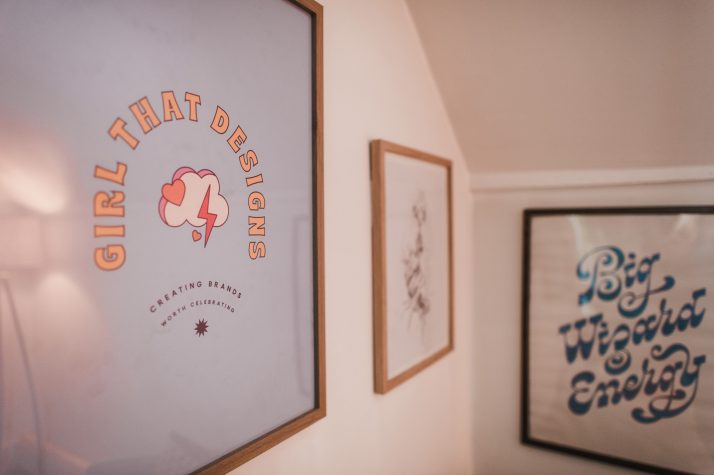 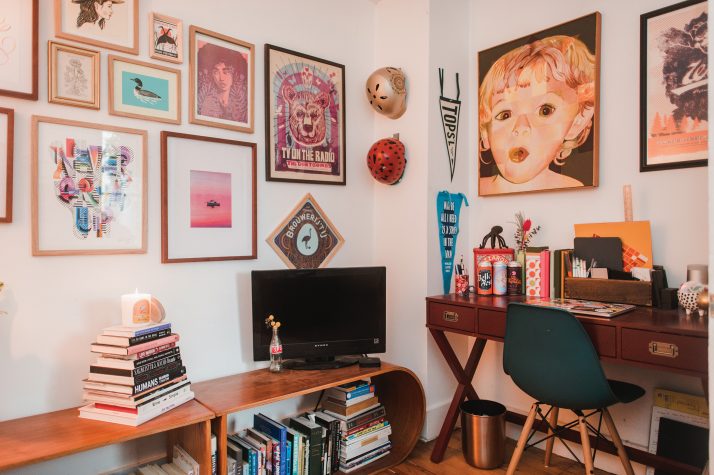 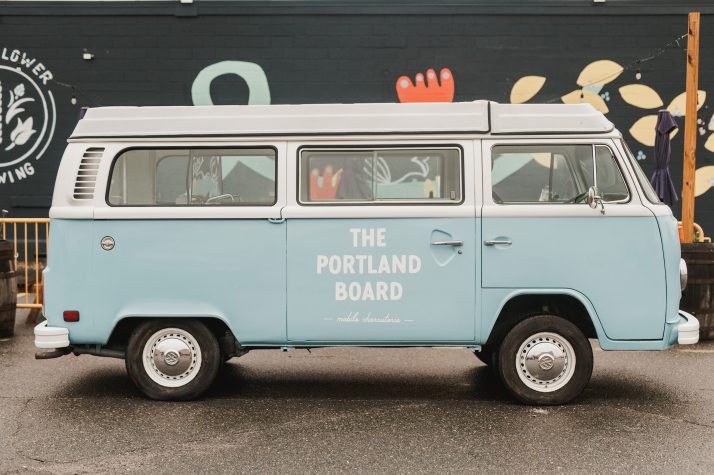 Norman recently designed the graphics for the Portland Board, a new mobile charcuterie van. 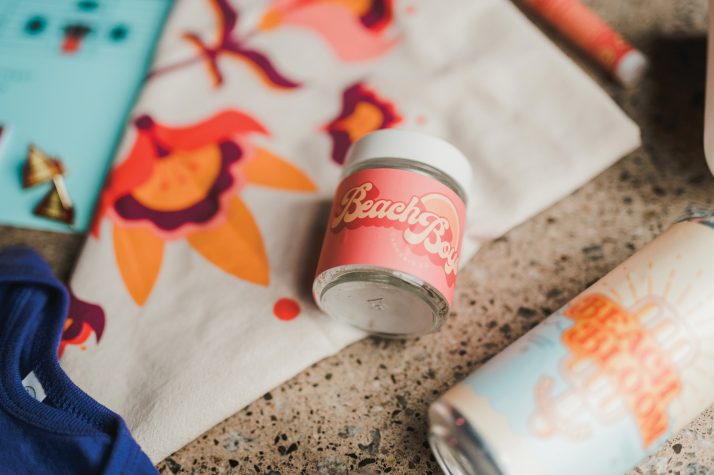 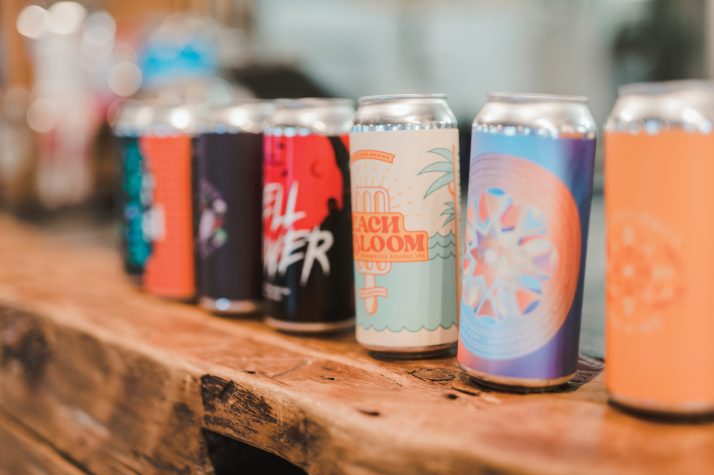 Allie Norman just wanted to design a beer label. The designer had moved to Portland—a mecca for craft brew enthusiasts—after spending time working and traveling abroad. Although she had studied graphic design in college and had been working as an art director for an agency, she didn’t feel satisfied in her freelance career. “I wanted to find my niche, and to change the kind of jobs I was getting,” she remembers. “So I started designing labels for myself. I started making the kind of work I wanted to see.”

Four years ago, Norman designed around 60 labels for her own education and amusement. It took a little time, but this hard work has paid off handsomely. Her company, Girl That Designs, has created graphics for over a dozen brews, plus she’s done work for cannabis companies, specialty food retailers, and even a few farms. “I had always enjoyed the beer scene, especially how everything is LOCAL, in all caps. I liked the community. I liked how stoked everyone was to promote each other,” she explains. “Now, I pretty much only work with restaurants, breweries, and other local businesses in that realm.”

Norman is, in local parlance, “from away.” Like me, she’s a Massachusetts transplant who happened upon Maine. Her sister and sister’s partner were living here, and they had just welcomed their first child. So Norman decided to move in with them and give the Pine Tree State a go while helping out with baby Ezra. “I’m marrying a Mainer next month,” she says (and one she met through the brewery scene to boot). “I can’t imagine ever leaving.” She fell in love with Portland’s small-town vibe, but also with the big-city level of talent in its creatives. “Having lived in other places, I’ve never felt that there was such a large amount of inclusion,” she says. “Portland’s unique.”

Norman explains that the past few years have been a bit “magical” and “like a fairytale.” It could sound saccharine coming from someone else, but Norman seems genuinely upbeat. Giddy, even. She’s built a career she loves, she’s about to get married, and she’s managed to turn the lemons of the past two years into lemonade through sheer force of will. At the beginning of the pandemic, she admits to panicking. “It was just months into my freelance career, and clients were emailing me saying, ‘Stop work immediately, we can’t pay you,’” she says. A month passed. Norman continued to panic privately. Then commissions started rolling in. Restaurants were looking to redesign their takeout menus (not to mention signs reminding visitors to mask up). Breweries were rebranding. Everyone was pivoting. And during those dark hours, Norman’s whimsical, nostalgia-infused style probably felt warm and comforting. “I also saw a lot of people trying to find their happiness,” she says. “People were grabbing on to their dreams.” In the process, they were helping buoy hers.

That’s the thing about buying and working local: it can act like a net, fishing everyone out of the deep end. “Two years ago, I was doing some cold emailing, telling people, ‘I love your business, maybe we can work together?’” Norman says. “Now it’s word-of-mouth, and I’m booked up through the year.” During this time, her artistic style has shifted a little. “It’s cleaner,” she says. “It’s becoming more sophisticated.” She’s found herself delving deeper into the history of design, color, architecture, and symbolism, seeking to understand why something appeals to her and how it will transmit a similar message to others. “I’ve been thinking more critically about why each element is there,” she says. “Where does a specific style come from?”

Scrolling back through her portfolio, it’s easy to identify certain themes. There’s funky, psychedelic, ’70s-tinged nostalgia. There are quirky bursts of folklore, like a series of cans she designed for Belleflower Brewery based on a hex sign that hangs above a founder’s ancestral farm. There are the “campy, farm vibes” of her recent designs for Gorham’s Orchard Ridge Farm. In the early stages of the design process, she likes to trawl through the Library of Congress to grab type, colors, and images that might align with her client’s business. “I get inspiration everywhere, honestly,” she says. “Even from stickers in a public bathroom, or walking down the street and seeing some old type.”

Norman is a “pretty prolific artist,” she says. Every day, she tries to set aside some time to do work purely for herself. This is where she plays around with new color schemes and riffs on familiar themes. In October 2021, for example, she sat down to create a series of graphics based on famous haunted houses from movies, including the Victorian featured in Practical Magic and the bungalow from Hocus Pocus. The graphics are streamlined and sharp, but somehow just as charming as the rest of Norman’s designs. She’s a bit of a workaholic, but that’s not so bad when your work involves visiting places like Cheese Louise and Belleflower Brewery on a near daily basis. “I love to go and sit and have a beer out of a can I designed,” she admits. “I mean, how cool is that?” 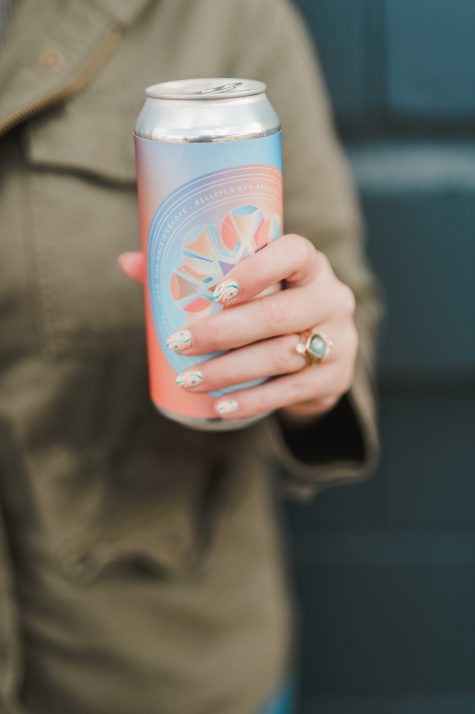 Norman’s style is bright, whimsical, yet often quite sophisticated. She pulls inspiration from European design and typography and has even been known to comb government archives for visual information. 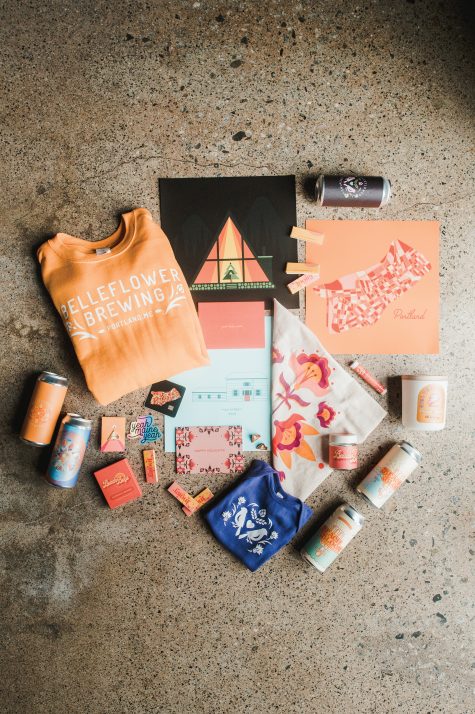 The ’70s psychedelic influence can be seen in much of Norman’s color selection. 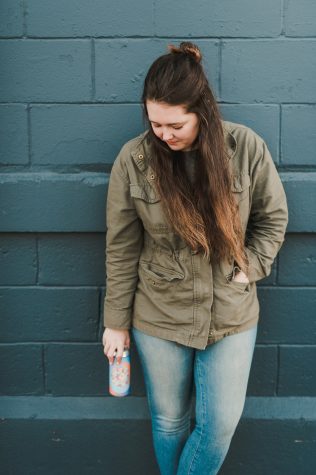 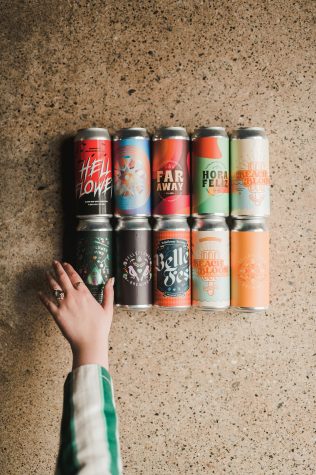 A self-starter, Norman began designing beer labels without any particular job in mind, but jobs, like for Belleflower Brewing, soon came to her. 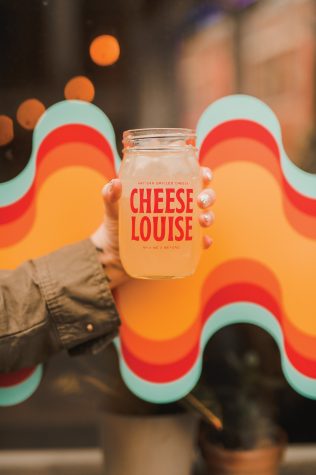 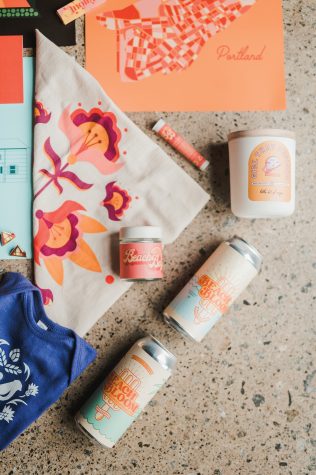 During the pandemic, Norman saw an uptick in business; the hospitality industry was suffering, but it was also shifting to accommodate a new reality. 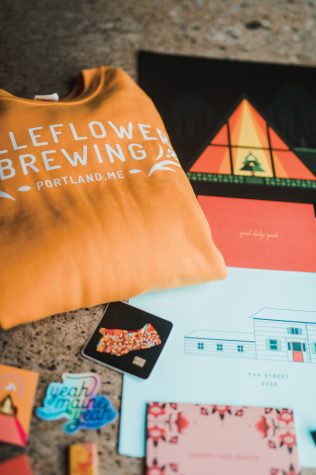 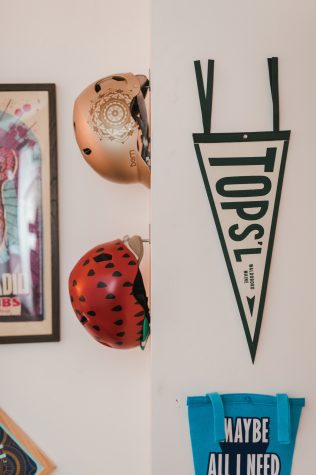 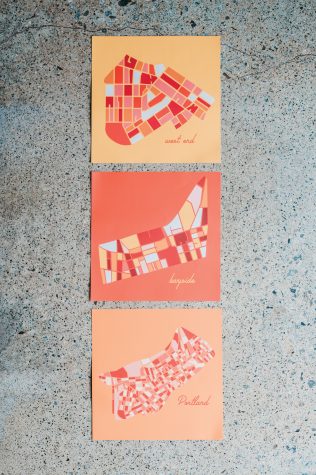 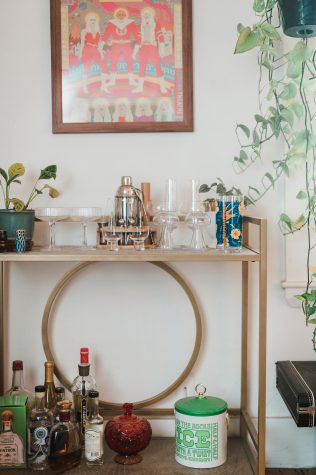 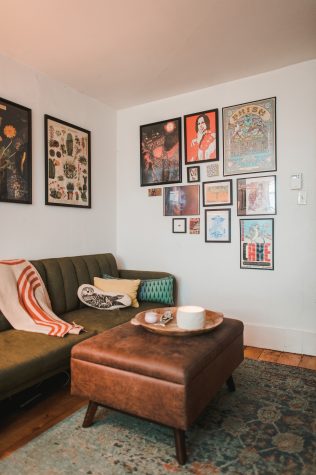