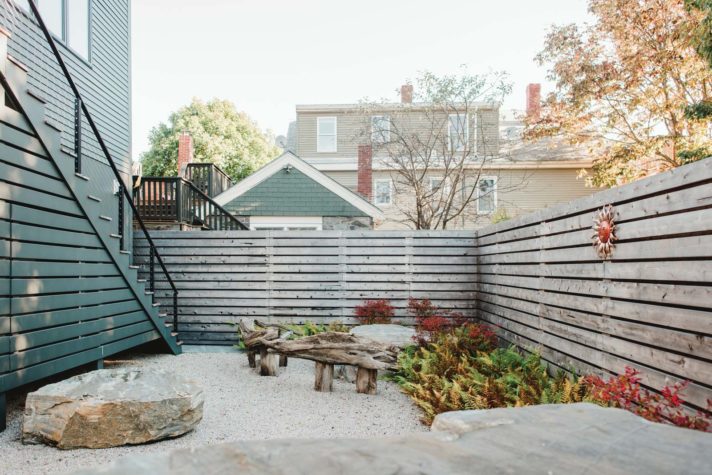 A residential project on Monument Street in Portland. 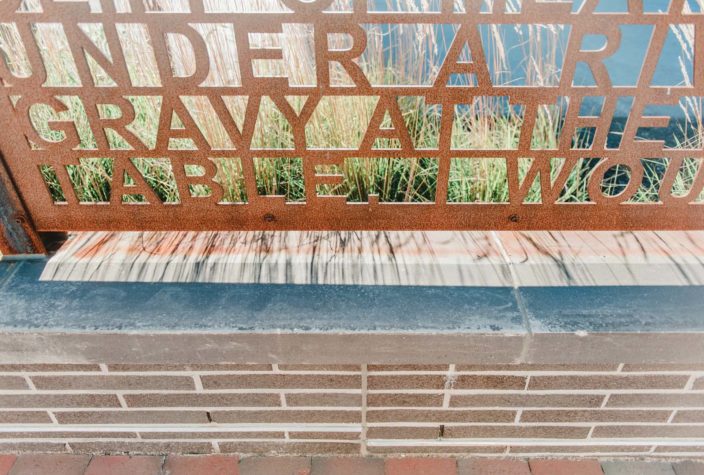 This poetry screen stands near Kennedy Park and features lines of poetry written by New Mainers. “Even though these people tend to be in transition, we wanted to create something durable from their words,” he says. 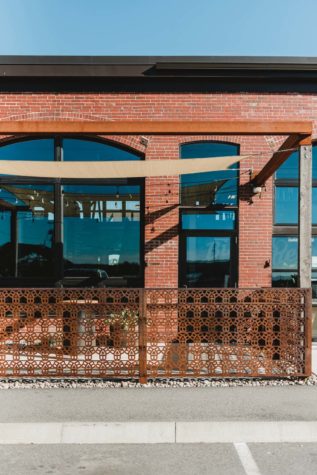 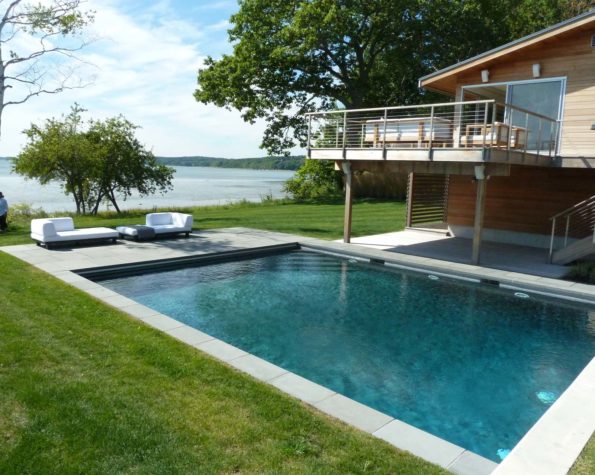 Soren deNiord is watching sparrows from his kitchen window. “They are taking away seed heads to the backyard,” he says, as he looks out the window toward a messy green space. It’s October, and deNiord’s property is busy with workers. “We decided to rip out the back deck and we’re turning it into a patio,” he explains. “My wife and I wanted to be down low, closer to the ground.” When the family first moved in, the house was a modest cape with an old deck and a small backyard covered in green grass. Now he’s decided to turn the space into a permaculture garden lush with serviceberries, river birch, blueberries, winterberries, and red dogwoods for a “pop of color in the winter,” he says.

When I visit designers’ homes, I’m always curious about how they have laid out their space, how they chose to position their windows, how they brought balance and composition to the hard angles of a roofline or the soft curve of a tower. When I visit builders’ houses, I look to see what materials they chose for their own flooring, what wood they selected for banisters and trim. But deNiord’s house is a bit different. When I first arrive, I keep looking out the windows, trying to get a glimpse of how he’s arranged his outdoor space. DeNiord is a landscape designer, and I can’t help asking him about his indoor jungle of pothos vines and his blooming red geranium. (“They were mostly gifts,” he admits.) I want to know about the yews (original to the house) growing out in front, the grasses he’s planting in the side yard. But deNiord is quick to dispel any notions I might have about his profession. It’s not, he explains, just about the plants or the soil or the rocks that make up a patio. Landscape architecture is, by his estimation, a field that “crosses all these different boundaries.” It’s about how public and private spaces intersect, how buildings sit on the land, and how people use man-made places. “Landscape architecture is about space making,” he says, “whether it is indoors or outdoors.”

The distinction between architecture and landscape architecture can be “a bit forced sometimes,” he continues. “When there is working knowledge back and forth, it doesn’t have to be polar.” I had assumed deNiord designs gardens and walkways the way architects design houses and garages. This isn’t quite right. When it comes to residential projects, deNiord is involved from the very beginning. He helps figure where the house will be built and what views the owners will see when they awake in the morning or retire for the night. He works with his clients to understand their goals and values and how they want to interact with the outdoors. “We start with a deep dive with the design team architects and the engineers,” he says. “It’s all about understanding the empirical data about what the site has to offer. You’re reading the site.” It’s a mix of technical skills (comprehending grade changes, solar gains, and the like) and artistic innovation. His work is about bringing people closer to nature and helping facilitate the interactions humans have with the world around them, flora and fauna included.

DeNiord came to this profession after spending years during his young adulthood working on organic farms. “I grew up in New England, hiking and being outside,” he explains. “And then I was fortunate enough to travel and study in Cuba, where I saw how civilizations and societies had designed urban centers in a smart way over millennia.” DeNiord has worked on high-end residential projects: he designed a woonerf (living street) for the luxury townhouse development Munjoy Heights, as well as coastal properties in Biddeford Pool and Cape Elizabeth, and homes on Munjoy Hill. DeNiord has also sought out public art projects. “I’m always looking for opportunities to integrate art and architecture, and to make the city more beautiful,” he says. In his backyard, he has a large piece of laser-cut steel, a tester panel for a “poetry screen” that he designed for Redfern Properties on Anderson Street. The finished project stands across from Kennedy Park in the Bayside neighborhood of Portland. It is made from weathered corten steel and features poetry excerpted from a Telling Room anthology about the concept of home and place written by “new Mainer” authors. “It was a timely piece,” deNiord says, “reflective of being in transition, and we wanted to create something durable from their words.” Working with Portland’s former poet laureate Gibson Fay-LeBlanc, deNiord made a piece of art that speaks to the character of Portland while beautifying a local streetscape.

Although he likes to spend much of his time in the forests and woods of Maine (bird-watching with his wife, hiking with his two sons), deNiord has a certain reverence for urban spaces. “I’m interested in the idea of liminal space in the city, and the spaces that form between public and private,” he says. He’s currently working on a project in Phoenix, Arizona, that is inspired by the concept of “petrichor” (the smell of the ground after it rains). “As part of a design team, we’re proposing to rip out a mile of main street Phoenix and do a sisal canopy over the top,” he says. The canopy will help cool the blistering city street and create a healthier space where people can escape the heat of the Southwest while spending time outside. (DeNiord partnered with Blank Studio and won an AIA competition for the proposal, but the project has yet to receive full funding and break ground.) This project, like all of deNiord’s, is sensitive to the ecology and climate of the area. “We try to tread as lightly as possible,” he adds.

DeNiord is an environmentalist, and he cares deeply about the future of the planet. Although he has many beautiful projects under his belt, he thinks his greatest achievement might be the cumulative effect of encouraging people to step outside and appreciate the natural charms of the landscape. “By creating beautiful spaces where people can appreciate the outdoors, it will bring an awareness of place and environment. So people can apply that on an individual level to their own value system, to their own lives,” he says thoughtfully. If people spend more time in nature, the thinking goes, they’ll be more inclined to preserve it. After a brief pause, he adds, “In a way, I think that is our biggest service.” 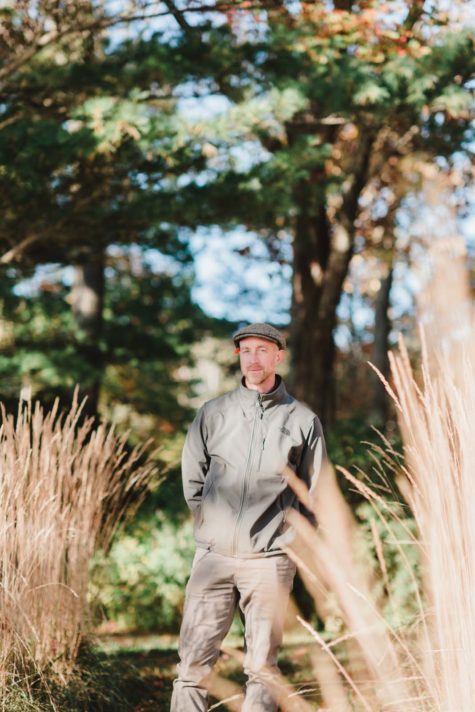 Landscape architect Soren deNiord likes to be involved with projects from the very beginning to the end. He figures out how to situate a structure on the landscape, how best to utilize the natural resources, and how to create a logical transition from indoor spaces to outdoor ones. 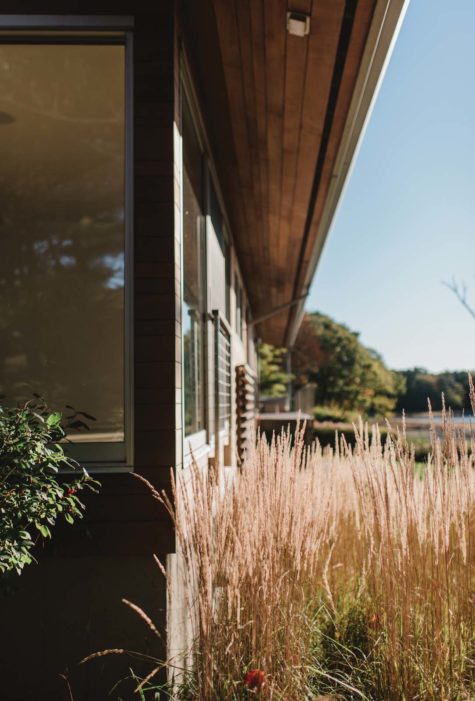