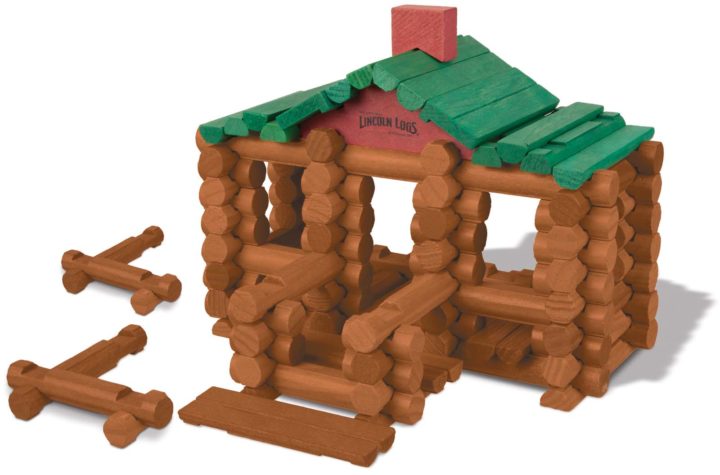 The son of one of the world’s most famous architects was inspired by his father’s commission in Japan. In 1916 John Lloyd Wright worked as Frank Lloyd Wright’s chief assistant on the design of Tokyo’s Imperial Hotel. The goal was to create a structure that could withstand the devastating earthquakes that were all too common in the country. The result was a system of interlocking timber beams that would allow the hotel to sway but not collapse during a tremor.

It was while watching the workers build the hotel that John Lloyd Wright came up with the idea of creating an educational toy composed of logs notched at both ends. Like the earthquake-proof building, the toy could withstand the rough play of children. Lincoln Logs hit the market in 1924 just as parents were realizing the value of construction toys such as Tinker Toys and Erector Sets for a child’s development. The iconic brown, muted red, and forest green toy fosters hand-eye coordination, fine motor skills, problem- solving skills, and spatial awareness.

The current distributor of Lincoln Logs, K’Nex, claims that the product was named after Abraham Lincoln, who was famously born in a log cabin, while others attribute the name to Frank Lloyd Wright’s original name, Frank Lincoln Wright. Lincoln Logs were entered into the National Toy Hall of Fame in 1999. A set of Lincoln Logs still comes with a step-by-step instruction manual with examples of different builds. The original set from the turn of the century included directions to build a cabin like Abraham Lincoln’s as well as the one described in the classic book Uncle Tom’s Cabin. Wright’s packaging featured a simple drawing of a log cabin, a small portrait of President Lincoln, and the slogan “Interesting playthings typifying the spirit of America.”