Let the Light Shine In

With their mobile greener greenhouses, ArchSolar is changing the way Maine grows 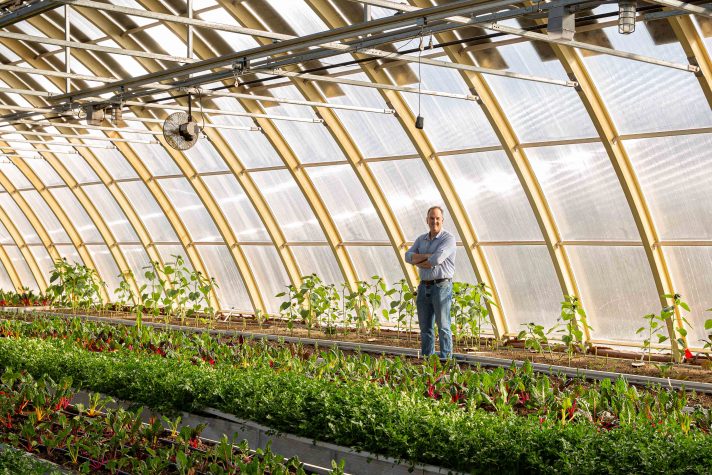 ArchSolar Founder, Tony Kieffer, in a solar greenhouse in Buxton. 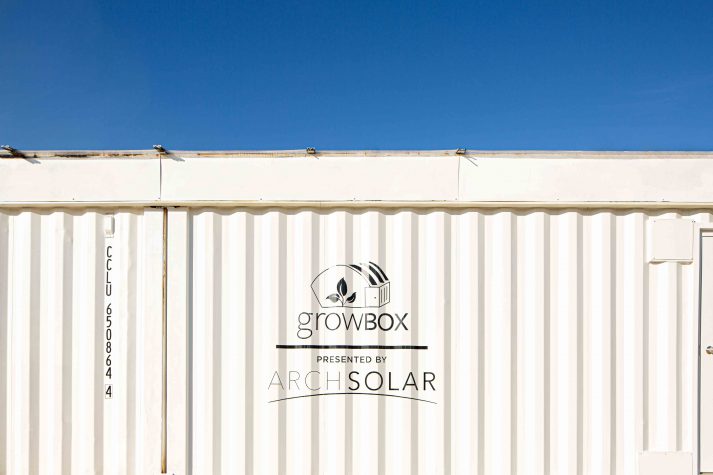 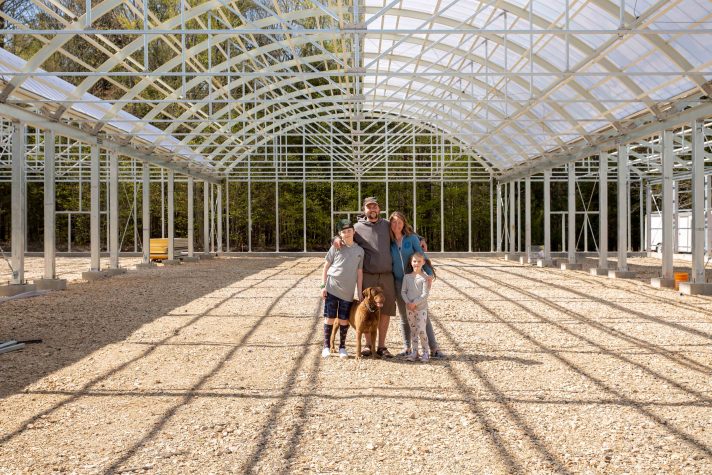 ArchSolar is building a 34,000-square-foot facility (the largest cannabis greenhouse in Maine) for Hughes and Kristen Pope, founders of Sweet Dirt in Eliot. 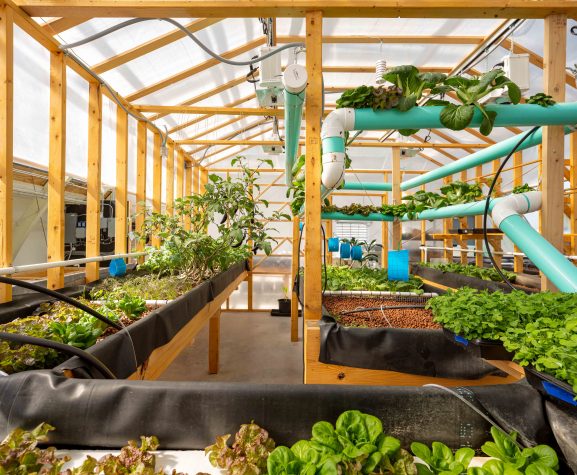 ArchSolar and Tao Yuan are doing innovative things together, like growing hard-to-source greens atop a city roof and incorporating aquaponics into their urban farm system. 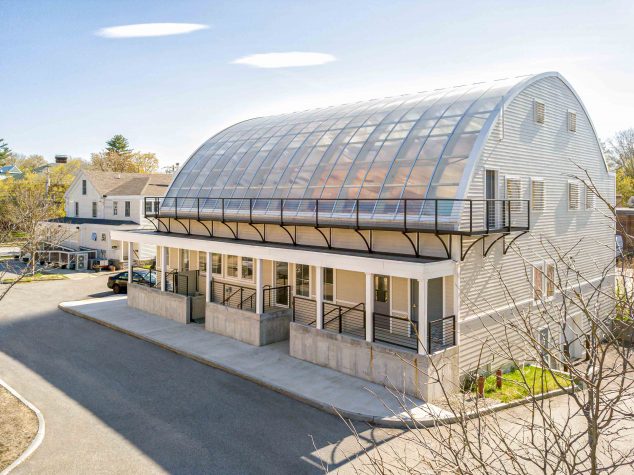 ArchSolar designed custom fiberglass arches to enable the 55-foot-wide structure to be built directly on top of a commercial kitchen.

ArchSolar’s client, Bruce Stedman, has seen it happen. He’s watched hoop houses blow away, the plastic sucked up by the chilly Maine wind, the seedlings inside left naked and shivering. “It happens all the time to farmers,” he says as we stand in his Buxton greenhouse. “This won’t go anywhere,” adds Tony Kieffer. “It’s been overengineered. It’s going to stand here for a long, long time.”

Kieffer is the founder of ArchSolar, the company that designed and built the high-tech, highly efficient greenhouses at Little River Flower Farm, where Nancy and Bruce Stedman grow organic produce and blossoms year-round. The Stedmans’ greenhouse was his first attempt at building a solar-powered single-bay growing facility made from polycarbonate panels. Kieffer’s goal was to make a greener greenhouse for his clients, partially covered in solar panels and made from durable, long-lasting materials. It’s been a learning process. Now he knows that he doesn’t need so many trusses, so much metal. He’s learned that there’s a sweet spot for how much of the roof can be covered with solar panels (25 percent). He’s figured out how to make his growing facilities even more eco-friendly, and more mobile.

Next to the ground-to-ground, 6,400-square-foot structure stands another greenhouse, a work in progress called a GrowBox. It doesn’t have any walls, but I can see where Kieffer is headed. This design is shaped a bit differently. It is not rounded like that first building. Instead, it features an elongated arch that rises from a base built from four metal storage units. “You can ship the materials in the storage units and then manufacture it on-site,” explains Kieffer. “You can also put it back in the box and reshape.” From a structural standpoint, he notes, the containers serve as walls and “obviate the need for a full foundation. And they bring ready-made raw space to the greenhouse that can serve as rooms that would usually eat up cultivation space.” In the Stedmans’ case, two of the shipping containers will be used to contain electrical control systems and house equipment like fertilizers, pumps, and mixing tanks, while the other two will be used for various purposes, including indoor cultivation, potting, propagation, and a washing station.

“Containers are like Legos, and we can support almost any configuration,” Kieffer says, emphasizing the flexibility of his GrowBox. He’s built greenhouses for educational facilities before, and he thinks the GrowBoxes have big potential in this realm. “We have had recent requests for tiny house applications and dance and art studios, and a pilot for produce production at supermarkets that also uses a container as a biodigester to convert food waste into energy to power the building,” he says. “Our arches allow tiny house–type dreams to, all of a sudden, not be so tiny anymore.”

It’s a cool concept, made possible by Kieffer’s years of research and experimentation. He first had the idea to launch a solar business back in 2009, when he was spending a lot of time flying back and forth between Maine and China. “I saw that the Chinese were doing really innovative work integrating solar into buildings,” he says. “I got really interested in the nexus of agriculture and energy, and in trying to make more sustainable year-round production.” While there are plenty of farmers using cold frames and high tunnels to grow winter produce, Kieffer wanted to try and move beyond “harvesting and cold cropping.” He wanted to see “real production.” But he knew that would take a lot more energy, given Maine’s climate. Solar can help produce the kind of heat farmers need, but Kieffer also recognized that it is “quite counterintuitive to put an opaque solar panel on the top of a greenhouse.”

Yet he kept going with the idea, because he believed American farmers would want a greenhouse that doesn’t require fossil fuels to keep warm, that is strong and sturdy, and that can be easily adapted to suit their needs as growers. Many greenhouses abroad are a little more complicated than the average hoop house. In China, Kieffer saw greenhouses made from glass with semi-transparent thin-film solar panels embedded within the structure. “I looked at doing that,” he recalls. Next, he looked at Italy and southern Europe, where farmers were using opaque solar panels. “They are higher efficiency, but obviously they block light more,” he notes.

However, a little shade is a good thing. When the sun is high in the Maine sky, it provides too much direct light for most greenhouse crops. The solar panels act as solar shades. They also gather energy, which can be used to power other structures or agricultural activities. Unsurprisingly, Kieffer has seen a lot of interest from the cannabis industry. “The fact is, that’s an industry that is growing like a weed and is using huge amounts of energy from how indoor production is being done,” he says. “Our whole approach is, how can we cut down on that?”

While ArchSolar’s products aren’t cheap (“We’re midrange to upper-end in terms of price,” Kieffer says), they do fill a niche need, particularly for eco-minded growers and small businesses, including one nationally acclaimed restaurant located in Brunswick. James Beard–nominated chef Cara Stadler approached Kieffer about building a rooftop greenhouse next door to Tao Yuan in 2016. “Her goal was to have an urban farm-to-kitchen site, but her constraint was that there was a limited amount of land,” Kieffer says. Stadler wanted to be able to grow plants you can’t find in Maine easily, like different varieties of bok choy and specialty greens and herbs. She also wanted to be able to raise fish in the aquaponics greenhouse. “It’s about as ambitious as you can get,” Kieffer says.

The finished product was a collaboration among Stadler, the team at ArchSolar, and architect David Matero. “It’s an incredibly beautiful structure,” says Kieffer with some awe. “It has this openness and architectural beauty. You don’t feel like you’re going into a greenhouse. It feels more like a train platform.” It’s an odd comparison, but it makes a certain amount of sense. So many urban centers have been designed with beauty in mind, and greenhouses often aren’t. For Kieffer, the arch has beauty, grace, and elegance: “There’s a reason it’s in our name.” 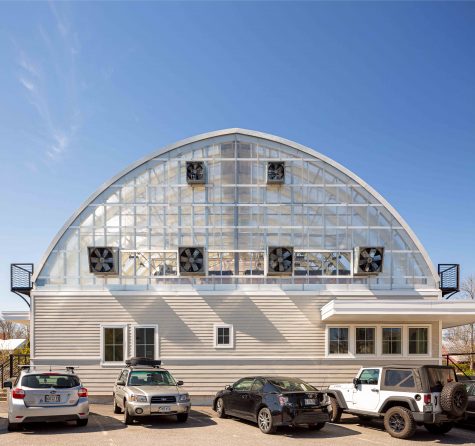 A rooftop greenhouse in Brunswick supplies food for Maine’s award-winning restaurant, Tao Yuan, and chef Cara Stadler’s other ventures. ArchSolar has innovative greenhouses installed in seven states (with another dozen in the works) from Hawaii to California to Michigan. 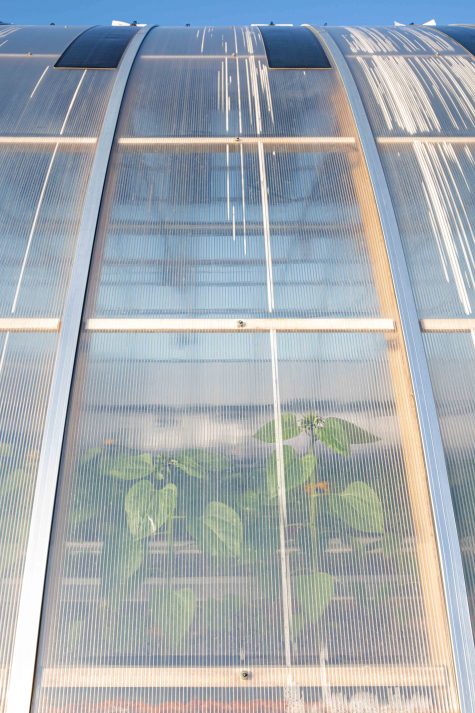 ArchSolar’s quest for more energy-efficient greenhouses led Kieffer to this fiberglass arched design; it allows for more plantable space and stronger buildings, which can handle both the high winds of Hawaii and the heavy snow loads of Maine. Using arches that span 50 feet, Kieffer says his structures are the widest greenhouses on the market.