For painter Andrew Wyeth, a Maine farmhouse and its occupants became muses 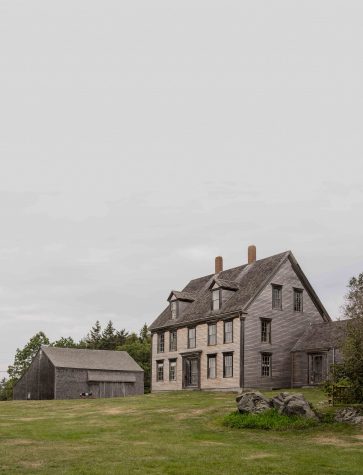 The origins of the Olson House in Cushing (opposite) date back to the mid-eighteenth century. The third floor was added in the late-nineteenth century, and the rooms were rented to visitors. The house is now owned by the Farnsworth Art Museum in Rockland. 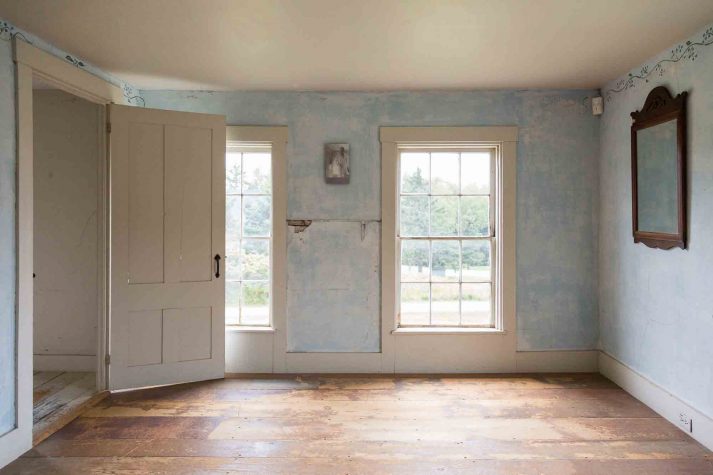 A room on the second floor with pale blue painted walls and stenciling. On the wall is a copy of Andrew Wyeth’s self-portrait, “The Revenant.” 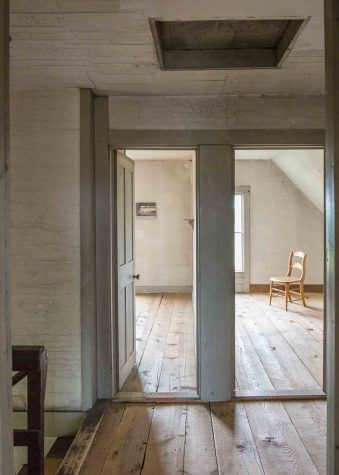 On the third floor, a “room with a view” for summer visitors. 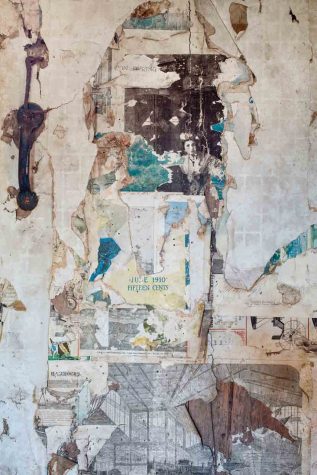 “A World Beyond” taken by Peter Ralston in July 2017, when he spent the night in the Olson House. Ralston was intrigued by the newspaper collages on the inside of the privy door created by Christina’s sister-in-law.

In July of 1939, 22-year-old Andrew Wyeth took a short drive from his family’s summer home in Port Clyde to visit a family friend in Cushing. Merle James, an artist and editor from upstate New York, had invited the handsome young painter to meet his three daughters. “He pulled up at the James house and out bounced Betsy, who was 17—the temperature in Cushing reportedly went up at that moment,” says Peter Ralston, a Rockport-based photographer and longtime friend of the Wyeths. The youngest of the three sisters, Betsy James immediately captured Andrew Wyeth’s attention. Equally smitten, she quickly introduced him to a special friend, Christina Olson, who lived with her brother, Alvaro, in a weathered, three-story house on a saltwater farm nearby.

That July day sparked a famous marriage (Betsy and Andrew married a year later) as well as a friendship between Andrew Wyeth and the Olsons—an intimate relationship that lasted for more than 30 years and inspired some 300 drawings, paintings, and watercolors, including one of the best-known works in American art. “Within an hour of Andy meeting Betsy, she was already influencing his life’s trajectory and his work,” says Ralston. Because of this relationship, the farmhouse, now known as the Olson House and owned by the Farnsworth Art Museum in Rockland, is as iconic as the artist and his work.

As she often did, it was Betsy Wyeth who named her husband’s most famous painting, Christina’s World. In the piece, which he painted in 1948, the Olson House appears in the distance, at the top edge of the scene, high on a treeless hill. According to the Museum of Modern Art in New York City, where Christina’s World is part of the permanent collection, the title “indicates that the painting is more a psychological landscape than a portrait, a portrayal of a state of mind rather than a place.” The actual place, however, was profoundly significant to Andrew Wyeth, to whom the siblings gave unfettered access to the house and the grounds. “Andy painted what he loved, and he loved what he saw there,” says Ralston. “He saw in Christina a beautiful human being. He saw the character and strength of New England in her, Alvaro, and their farm.”

According to a history compiled by the Farnsworth’s chief curator, Michael K. Komanecky, the Olson House’s origins go back to the mid-eighteenth century, when William Hathorn built a log cabin on the peninsula between the St. George River and Maple Juice Cove. Hathorn’s grandson, Samuel Hathorn II, built a two-story, wood-frame house on the property; at the end of the nineteenth century, Samuel Hathorn IV added a third story and rented out the bedrooms to summer visitors. After his death, his daughter, Katie, and her husband, John Olson, took over the property. They had four children, including Christina and Alvaro, who stayed on at the family homestead after their younger siblings, Samuel and Fred, left Cushing to make their fortunes elsewhere. From infancy, Christina was afflicted with a debilitating neuromuscular condition that left her unable to walk; she refused to use a wheelchair, choosing instead to crawl, as depicted in Christina’s World. After their parents’ death, Alvaro exchanged fishing for farming to help care for her.

“Between the two of them they had a lot of Maine forti-tude,” says Farnsworth curator Jane Bianco. What the siblings didn’t have was money to maintain the house. After their deaths—Alvaro died in December 1967 and Christina a month later—Samuel and Fred sold the property to a local family who divided it up, leaving three acres with the house and barn. Despite its poor condition, the Olson House was already somewhat famous, having been featured in Wyeth’s work. It was advertised for sale and purchased by Hollywood producer Joseph Levine and his wife, Rosalie, who worked with the Wyeths to restore it with the intention of turning it into a museum for the artist’s work. The exterior was painted white, damaged floorboards were replaced, and walls and ceilings were shored up in anticipation of an opening in the summer of 1970. Cushing residents, however, were not on board. “The Levines and the Wyeths got caught up in what became a very public dispute with local residents about access to the house,” says Bianco. In 1986 the Levines sold the house to John Sculley, then CEO of Apple, who ultimately gifted it to the Farnsworth in 1991. It was designated a National Historic Landmark in 2011.

The Farnsworth’s preservation efforts have balanced maintaining the 16-room Olson House as it appears in Wyeth’s paintings with stabilizing the structure. “People want to see it in a certain way,” says Bianco. “When Andrew first saw the house it was painted white, but the siblings weren’t able to keep up with the painting. The Farnsworth has wrestled with whether or not we should paint it to preserve it, because we have come to associate its unpainted facade with its character.”

Bianco is currently managing an $188,000 National Park Service Grant awarded to the museum last fall for work to begin on the house this year—an ongoing project to restore it to its 1970 appearance. (That date was chosen because, prior to that, before the Levine-era restoration directed by Betsy Wyeth, the house was in serious disrepair.) The grant will fund continued preservation work on the windows by Bagala Window Works in Westbrook, interior paint analysis, and interior plastering, guided by a 2015 assessment from Peter Lord Plaster and Paint in Limington. “Most challenging may be addressing the stencilled walls on the second floor and maintaining the unpainted plaster on the third floor dating to the late 1870s,” says Bianco, adding that some of the original plaster was thinly applied, indicating that wallpaper once covered it, and that wallpaper was likely used throughout the house during the siblings’ childhood. “Thin plaster presents a significant challenge in an unheated, wood-frame structure in coastal Maine,” she says. “The goal of the plasterwork is to restore as fully as possible the fresh, clean, white-painted walls of the house as completed in 1970.”

The Olson House and grounds are closed to the public until 2021, but not solely because of the COVID pandemic. “Parking has been a problem, and because of a wonderful private supporter we have been able to carve out a parking lot behind the house to preserve the view from the front,” says Bianco. “It’s a different kind of preservation: not plaster and lath, but concept and imagination.” A year from now, whether visitors are seeing the house for the first time or returning—as many do—for their annual pilgrimage, they will again feel the spirit of what Bianco calls an “alive and animated” place.

Ralston experienced that lively spirit in an hours-long visit to the Olson House with Wyeth in 1980. “It was very intimate. I swore I’d never go back,” says Ralston, who photographed the artist’s drawings and paintings for Christina’s World, a 1982 book by Betsy Wyeth, but avoided making pictures of the house itself because “it was Andy’s.” He finally did go back on July 9, 2017, when he spent the night in the house under a full moon and cloudless skies, making photographs. One of his favorites is “A World Beyond,” made in the Olson House privy. “When I peeked into the privy I was immediately captivated by the myriad layers of papers stuck to the inside of the door,” Ralston reveals. “[The late] John Olson, who was born in the house, recalled how his mother, Christina’s sister-in-law, would sometimes mix up wallpaper paste when a newspaper came into the house and new images would be added to the door. Having heard the ghost stories, Ralston explains that while the night was a powerful experience, it wasn’t a paranormal one. “I felt the love and respect Andy had for Christina and her brother and the rest of the family, which was reciprocal,” he says. Captured in a famous, familiar painting and an iconic house high on a windswept hill, that love lives on.