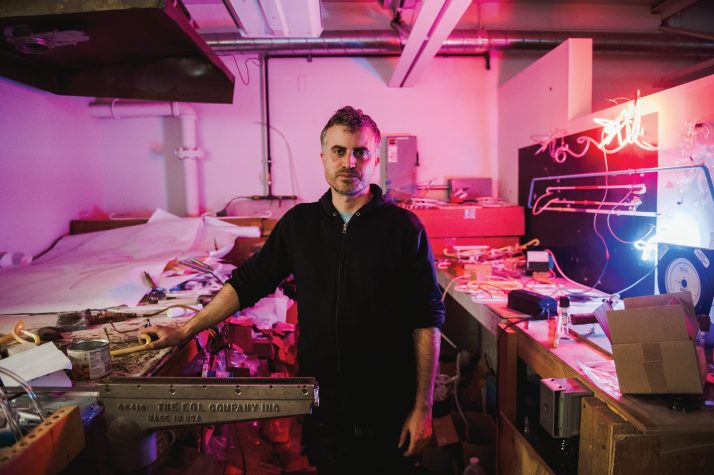 When he’s not working with neon, Johansen likes to experiment with ice and dye. Someday, he might start selling his range of ice-dyed vintage sweatshirts and T-shirts. 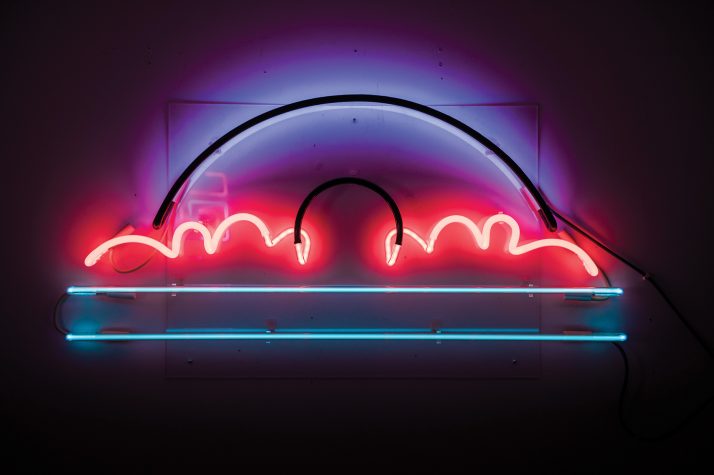 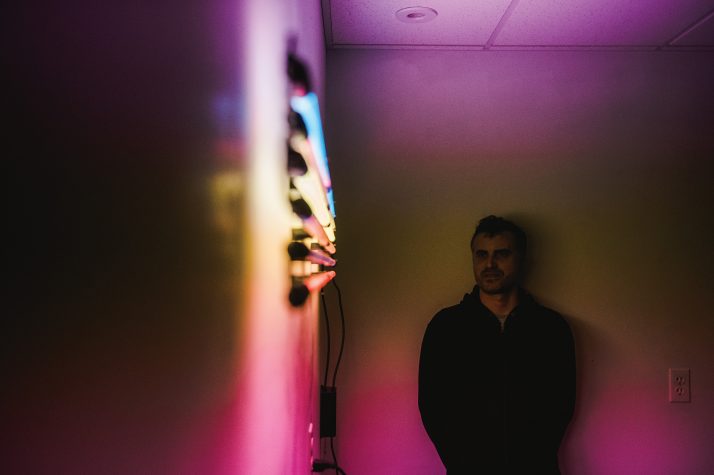 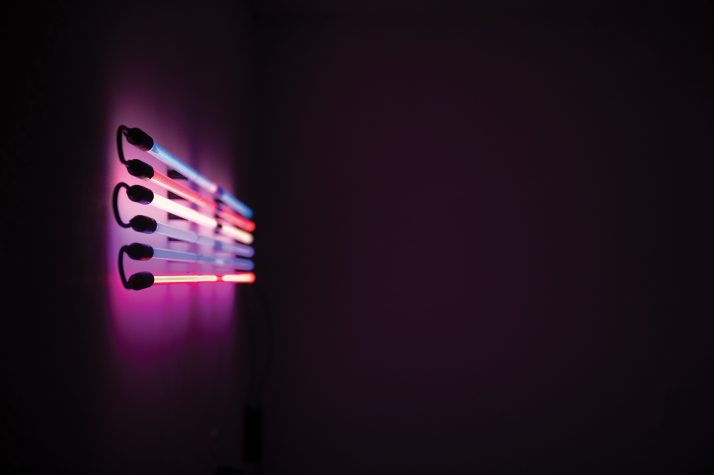 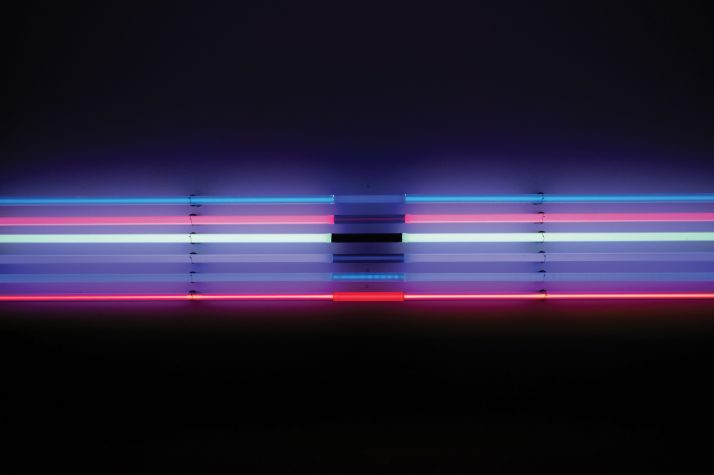 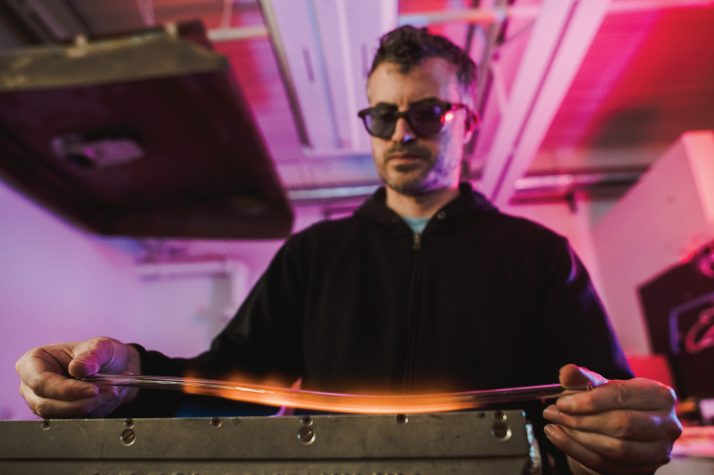 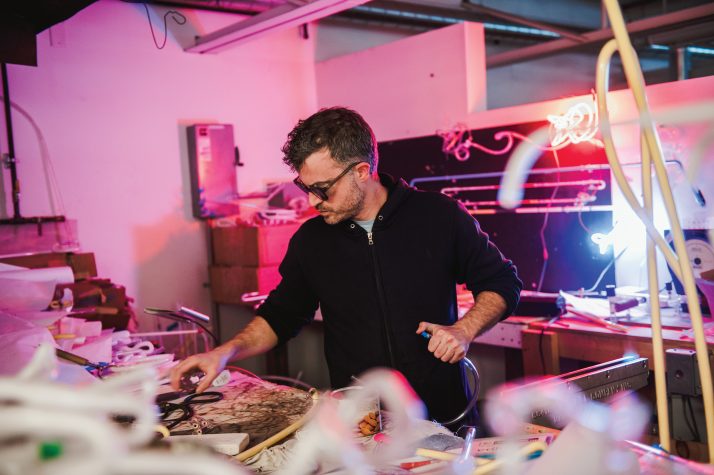 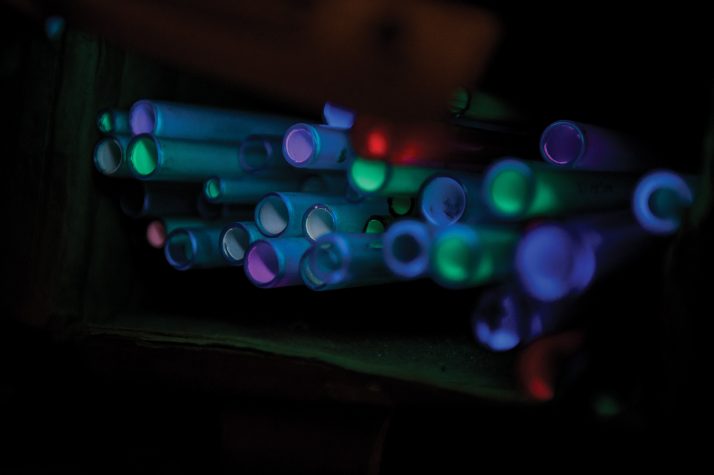 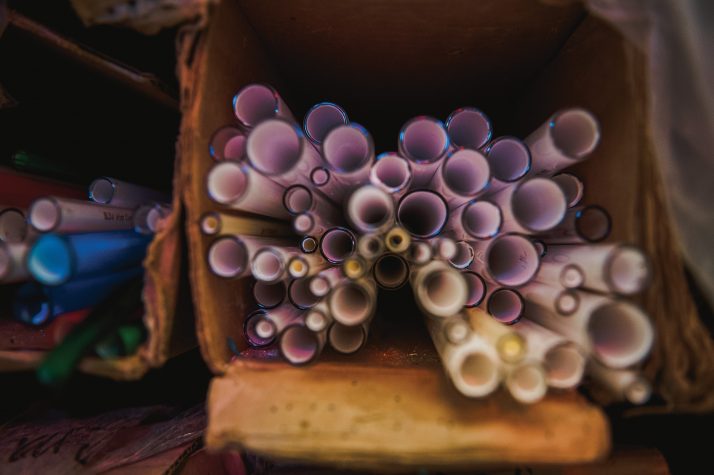 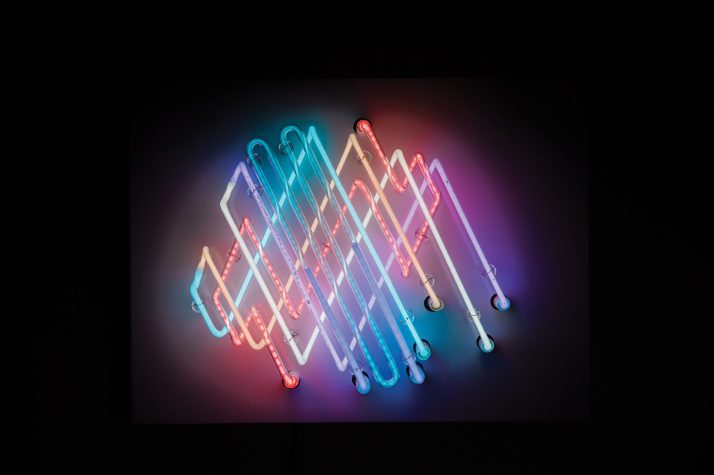 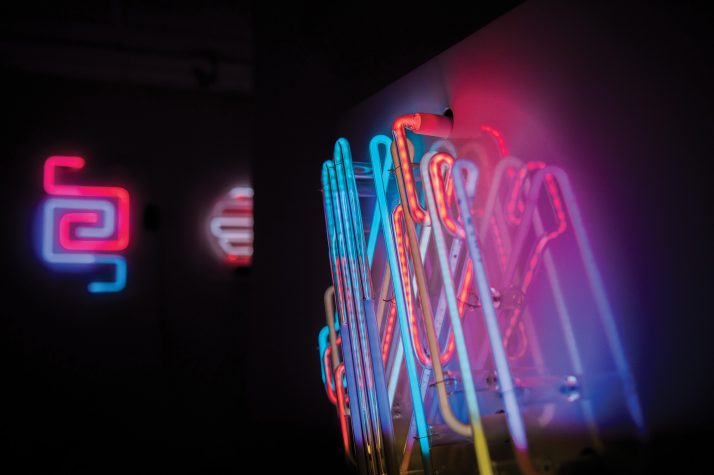 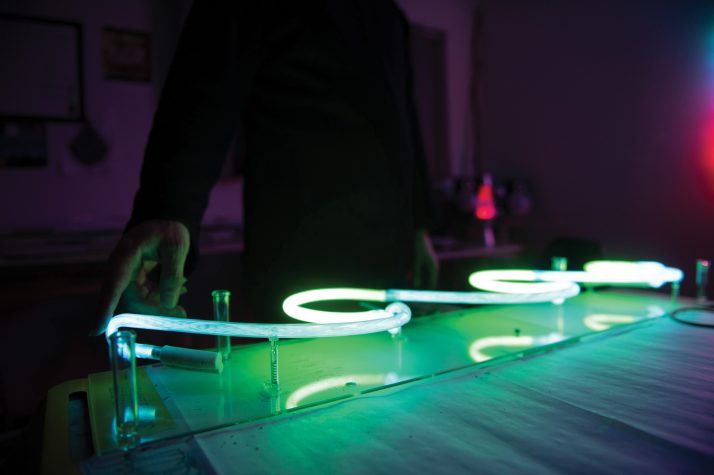 While neon is Johansen’s favorite noble gas, some colors are best achieved through other means, including argon, mercury, and helium.

“It’s not magic,” says David Johansen, who is perhaps better known by his online persona, Neon Dave. “I have a pet peeve with that word. I get why people want to call this magical because it’s cool, but everything we call magic is just science. We know,” he says, leaning forward in his metal folding chair and stressing that last word, “exactly how it works.”

One of the noble gasses, neon is colorless, odorless, and chemically inert. It doesn’t combine with other elements, and it’s relatively rare in the earth’s atmosphere. We breathe it in daily without a second thought, but it doesn’t do much for us, unless we isolate the particles, stick them into a vacuum, and give them a little electric shove. Then neon glows crimson.

Johansen is an artist who works with neon, argon, and helium. If you’ve spent any time eating or drinking in Portland, his work is probably familiar to you. He makes the city more colorful with his custom-designed neon signs on Congress Street, Washington Ave., and in the Old Port. But here in his studio, Johansen shows another side of his practice. He’s pushing the combination of curved glass and gas to new levels of technique and craftsmanship, making sculptures that aren’t intended to advertise anything except the strange properties of visible gas.

Located in Bayside, just a stone’s throw from several breweries lit by his work, Johansen’s studio is spacious and quiet, tucked away from the main sidewalks. That’s okay; he doesn’t want foot traffic. “Make me sound cantankerous,” Johansen jokes. He’s not really—he’s just facing the same problem as so many other contemporary makers: people expect his art to come cheap. The past several years have seen a social media–fueled boom for “faux neon,” as Johansen terms the bendable LED strip lights that are often advertised as “neon.” “It’s companies selling LED lights and calling themselves neon companies, but there’s nothing we can do about it,” he says. These signs (which often feature “cutesy” phrases or winking cactuses or other such dorm-friendly designs) are mass produced and can retail in the double digits. “It’s kind of good, though,” he adds. “It’s taking away so much of the stuff I don’t want to do anyway.”

So what does Neon Dave want to do? “I learned to work neon in 2003, and I did it because I wanted to make art,” he explains. “I love that people like the signs I make, and I really do enjoy making the city more lively and colorful,” he says. “But my mission is to do something different. When I started, I was already doing paintings. I wanted to add a light element.” Hanging on a far wall of his studio is one of his earlier pieces, which was inspired by the lurking aquatic monsters of Lovecraftian fiction. The sculpture involves a neon tube surrounded by an acrylic box covered in several layers of paint and iridescent film. “It’s supposed to be this deep, dark, underwater thing,” he says. “I was trying to create my own glowing zones.”

For Johansen, there’s a big difference between a neon sign and a neon sculpture. A sign is what he creates for companies he likes. (“You’ll get my best work when you kind of let me do my own thing,” he reveals.) A sculpture is something he builds slowly in his mind, drawing on observations, experiences, and a wealth of knowledge about the science and history of neon. Some of his sculptures blaze a shocking orange-red, the color that neon naturally glows when the particles are excited. Others are woven mazes of color: blue, then purple, then pink. “Sunset colors,” he says. “I’ve been really drawn to those retro, beachy colors. I like to inhabit this pinky, magenta zone. Those colors go off into the ultraviolet territory of the visible spectrum. They’re out there.”

When asked whether he finds the limited palette of neon stifling, Johansen shakes his head. “I like the limitations. I like this form.” Plus, there’s always vintage neon. Johansen follows trends in the neon community (a loosely affiliated group of people that spans countries and is mainly connected on Instagram) and has noticed that “everyone’s always on the lookout for old colors.” One particularly beloved hue is oxblood. “It looks almost black when it’s turned off,” he says. “And then there’s uranium glass, which lights up from the radiation, giving off an intense green glow.” Many of the older sign-making businesses have closed their doors, and some of the best glass can be found by scouring their fire sales. “Everyone is always saying neon is dead,” he adds. “It’s not. It just goes through waves.” He’s noticed a recent surge of interest in neon among art students and members of Gen Z. “The next generation of neon artists are coming up now,” he says.

It makes sense; people like light. We’re not too different from moths in that way. We’re drawn toward the fire, the sunset, the glancing of moonlight off water. Mimicking these effects is nothing short of amazing, a term that Johansen will tolerate, even if he eschews the m-word. “It can be very creation-like,” he admits. “You do feel a little like you’re stealing the power of the gods.” 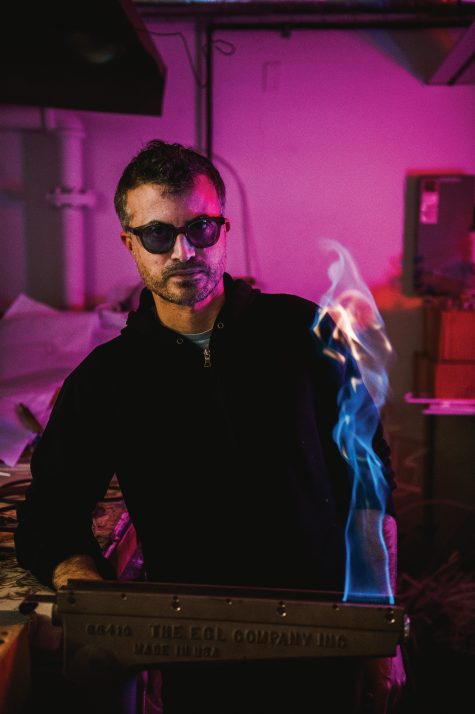 Neon Dave stands behind a lit torch used to heat and bend tubes of glass in his Portland studio. Although he started as a painter, he works primarily in neon, doing some commercial work and plenty of fine art. 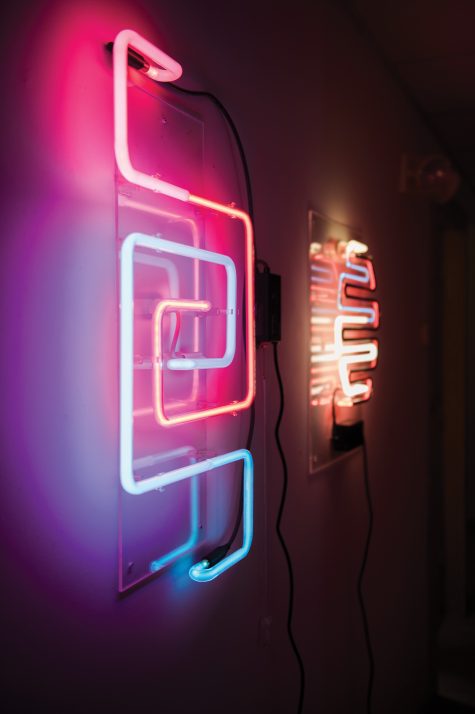 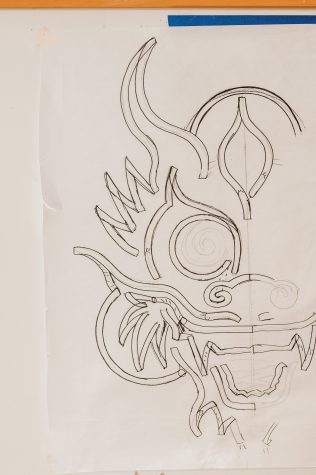 Sketching out a work-in-progress. 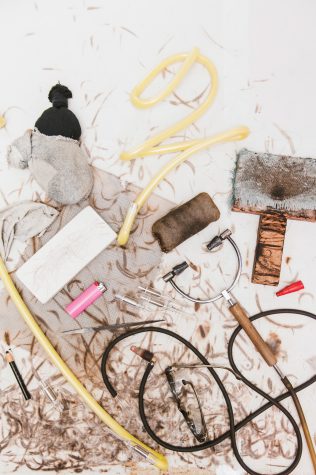 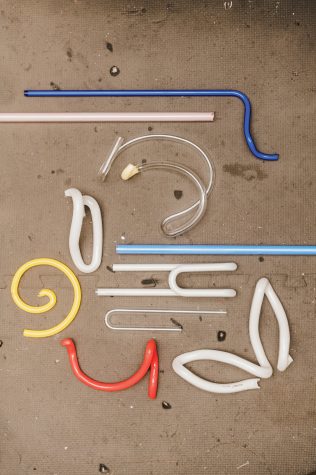 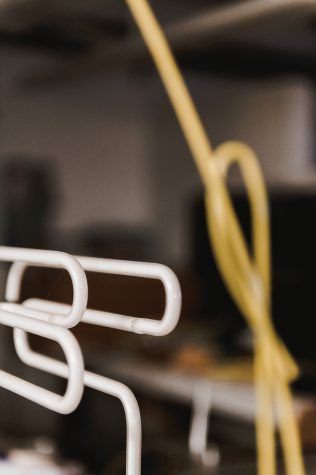 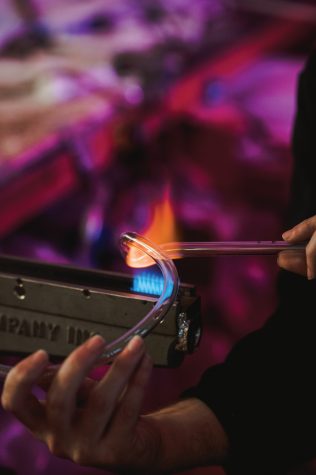 Bending glass at his studio. 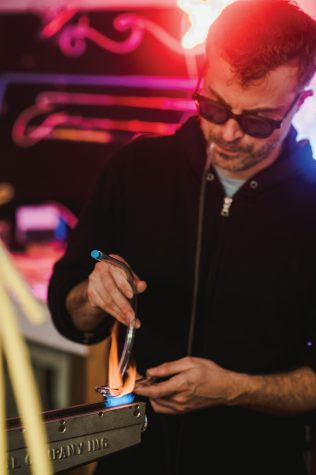 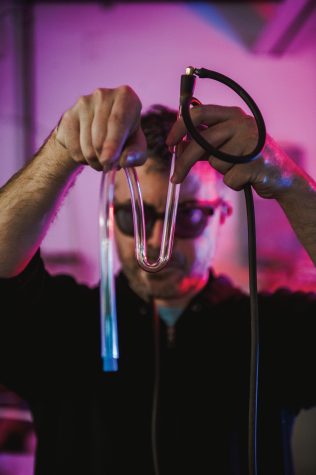 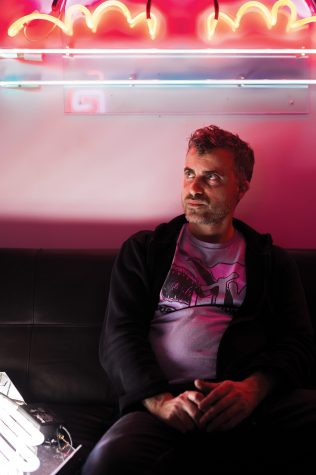 Lately, Johansen has been into pinks, magentas, and other retro sunset hues. 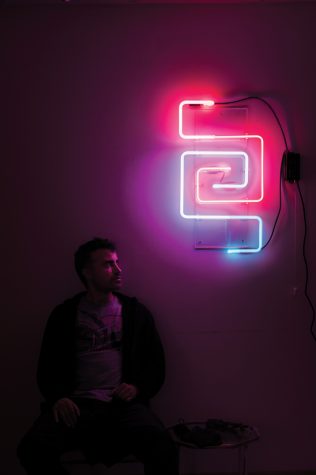 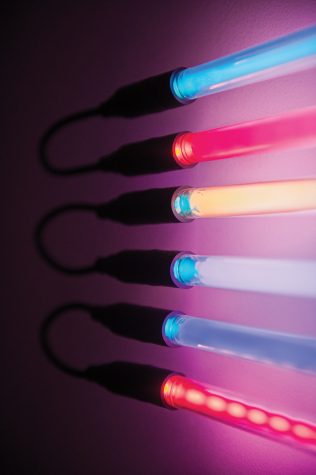 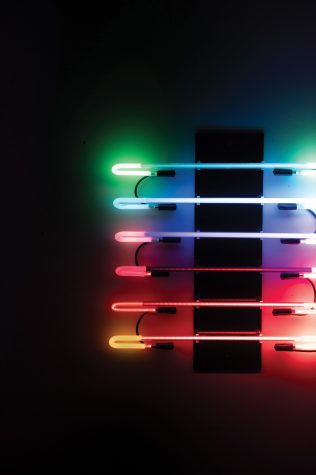 For Johansen, the limited color palette never gets boring. “I like to push what I can make,” he says. 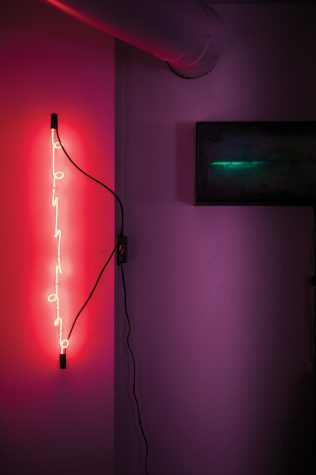 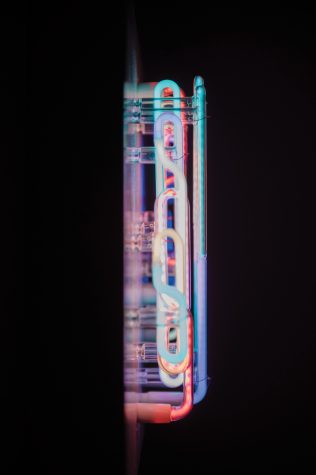 In his fine art practice, Johansen weaves, twists, and layers glass to play with the properties of light.